This bronze marker was placed by the Rochester Historical Commission in 1978 on the site of the first settler's house in Oakland County. The house was a log cabin built by Alexander Graham, the son of Rochester's founder, James Graham, in the spring of 1817. In the following year, the first child born to a non-native settler in Oakland County was born in the house when Alexander Graham's wife gave birth to a son named James, after Alexander's father. By 1823, the Alexander Graham house was the meeting place for village children to be taught reading, and therefore served as the village's first school house. 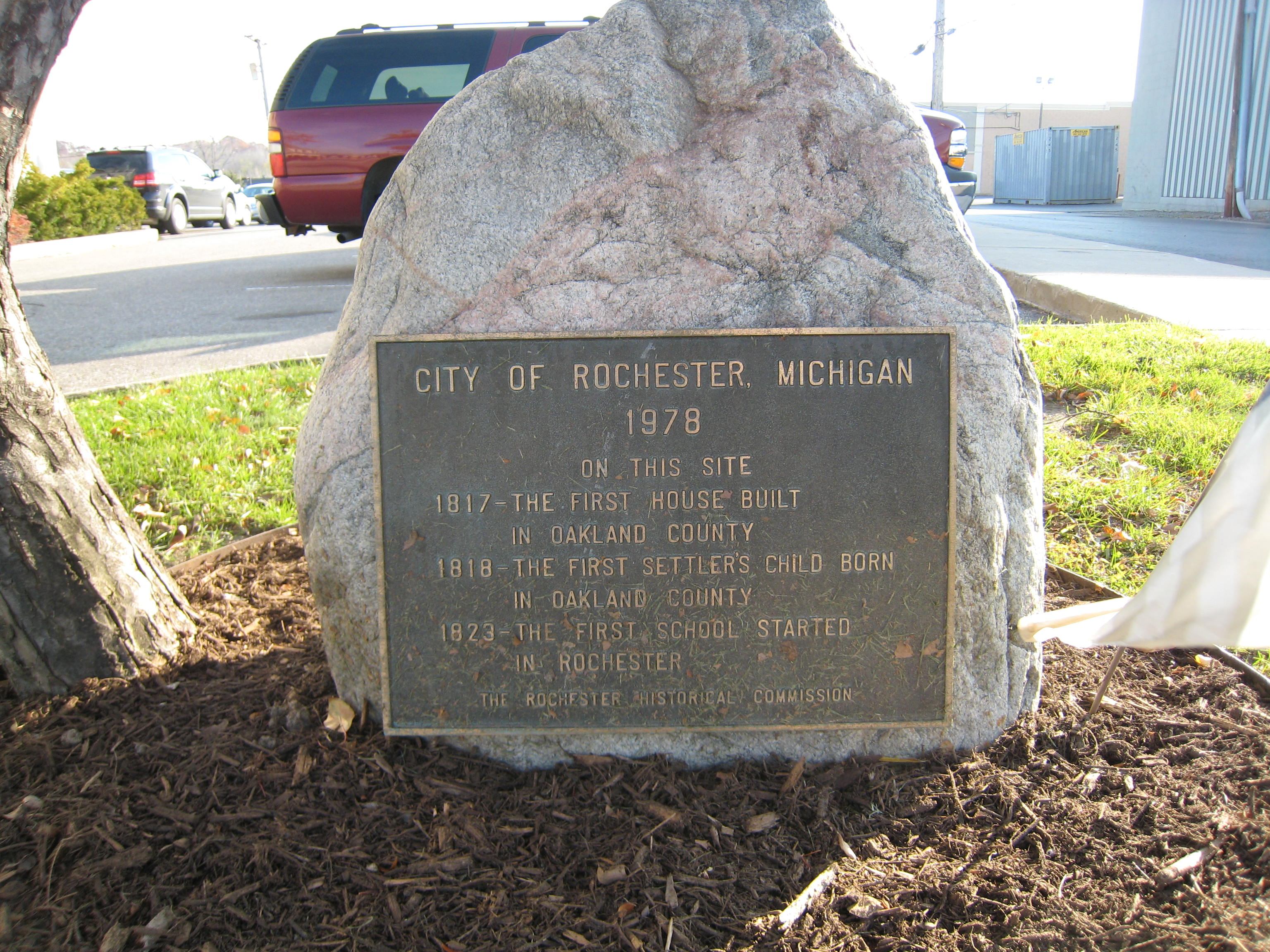 1823 - The First School Started in Rochester

The boulder used for this marker was retrieved by the City of Rochester from the banks of Paint Creek. The bronze plaque was furnished by the William R. Potere funeral home.

It is believed that this site is where Alexander Graham built the first log cabin in Oakland County after the Graham family arrived at the future site of Rochester in 1817. In 1818, Alexander's son, James (1818-1839), who was named for his grandfather, was born in the log home that stood on this location. The child was the first non-native birth in what would become Oakland County.

James Graham and his family came from Ontario to Detroit in 1813, bringing their household goods and livestock across the river by lashing the animals to canoes. At Detroit, James and his sons, Alexander and Benjamin, made a living cutting wood for 25 cents a cord. Native Americans who traded at Detroit told the Grahams of good land that was available in the “land of the oaks,” at a place where three waterways converged. James Graham’s son, Benjamin, was working on a surveying party on the western line of Macomb County in 1816, and saw good land. In the summer of 1816, he and his brother, Alexander, explored the interior, as far west as what is today the city of Troy. The following spring, they brought the rest of the family back to the area. Traveling along the Clinton River to the place of its confluence with what we know today as Paint Creek and Stoney Creek, the Grahams found their new home and called it Rochester.

The Grahams lived in Rochester and Avon Township for the remainder of their lives. James, Mary and son Benjamin squatted on land near what we know today as Avon & Livernois roads until a government land sale was held. At that time, they bought land for a farm in sections 28 and 29, along what is now Crooks Road, just north of Auburn. Alexander Graham stayed in the village of Rochester and lived in a log house at the corner of what are now East Third Street and the alley.