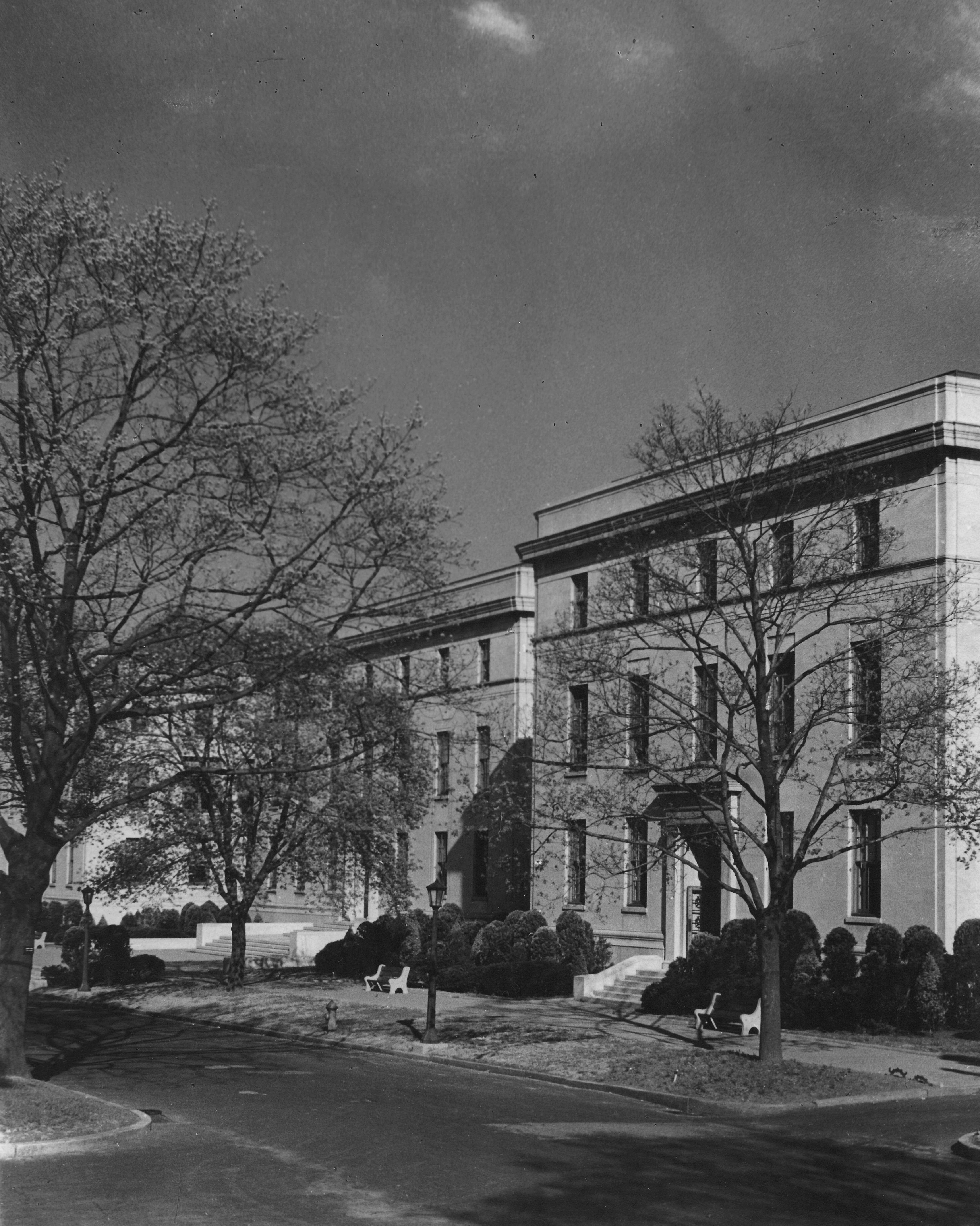 Primary School which previously stood on this site, 1893. 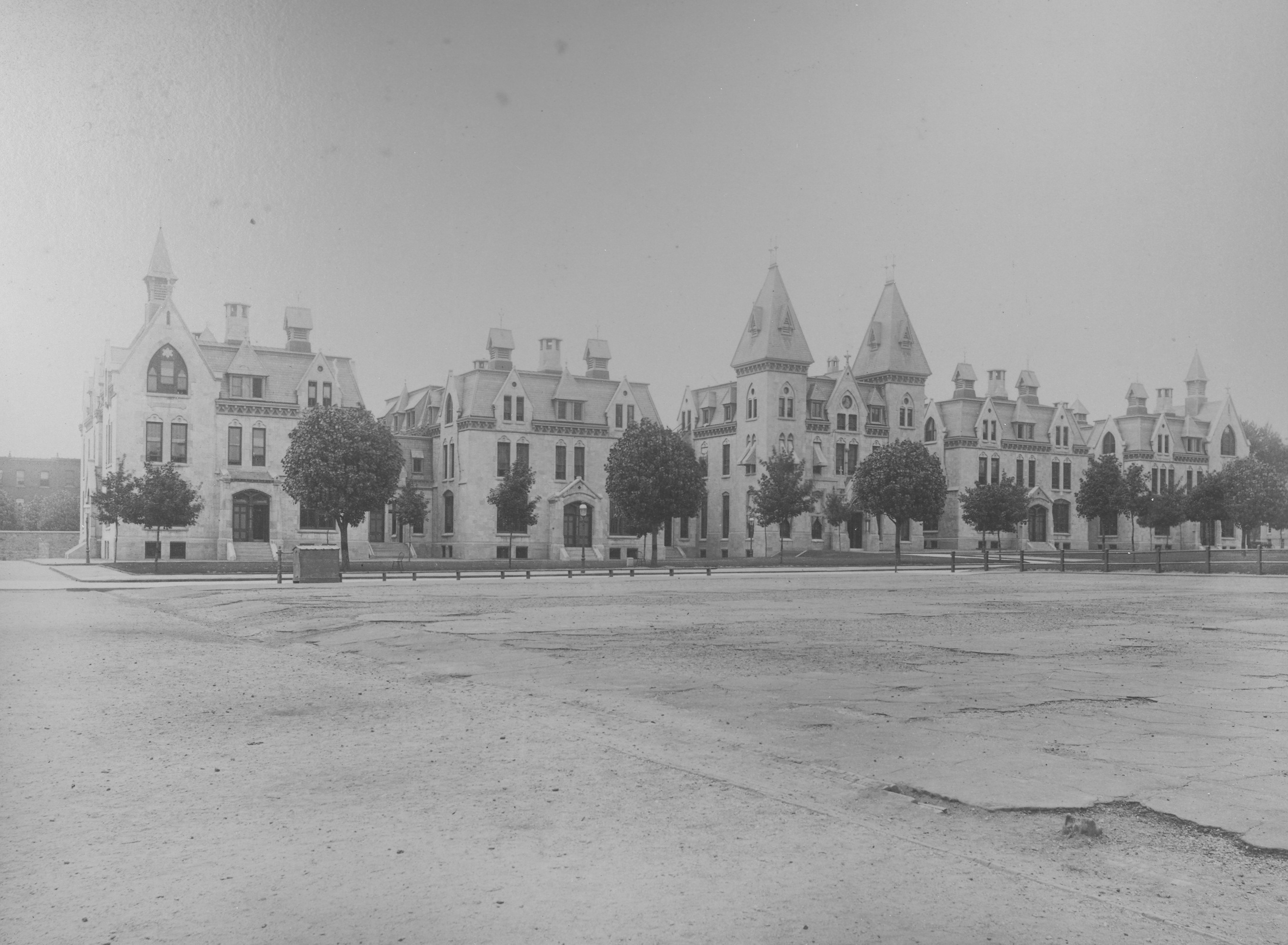 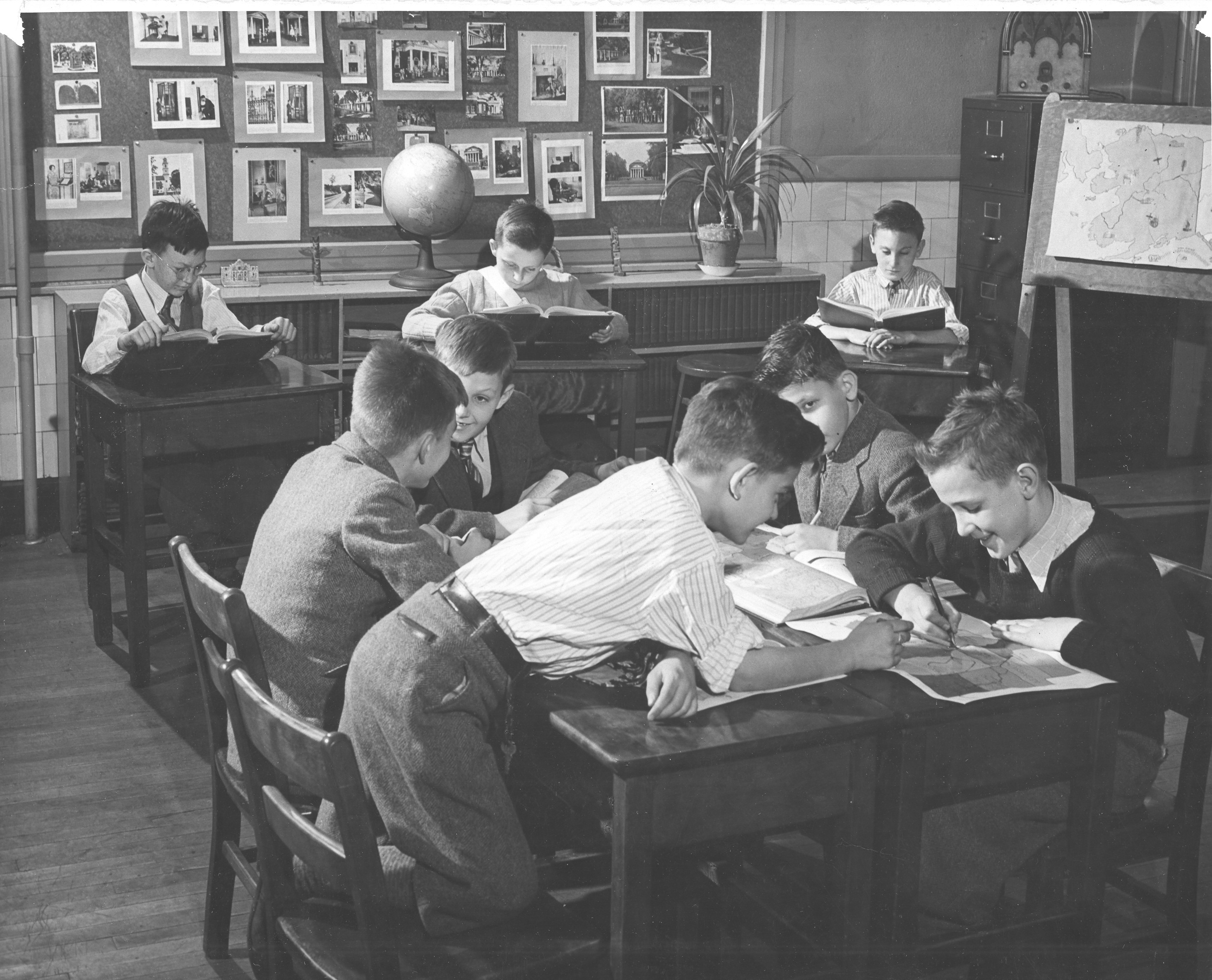 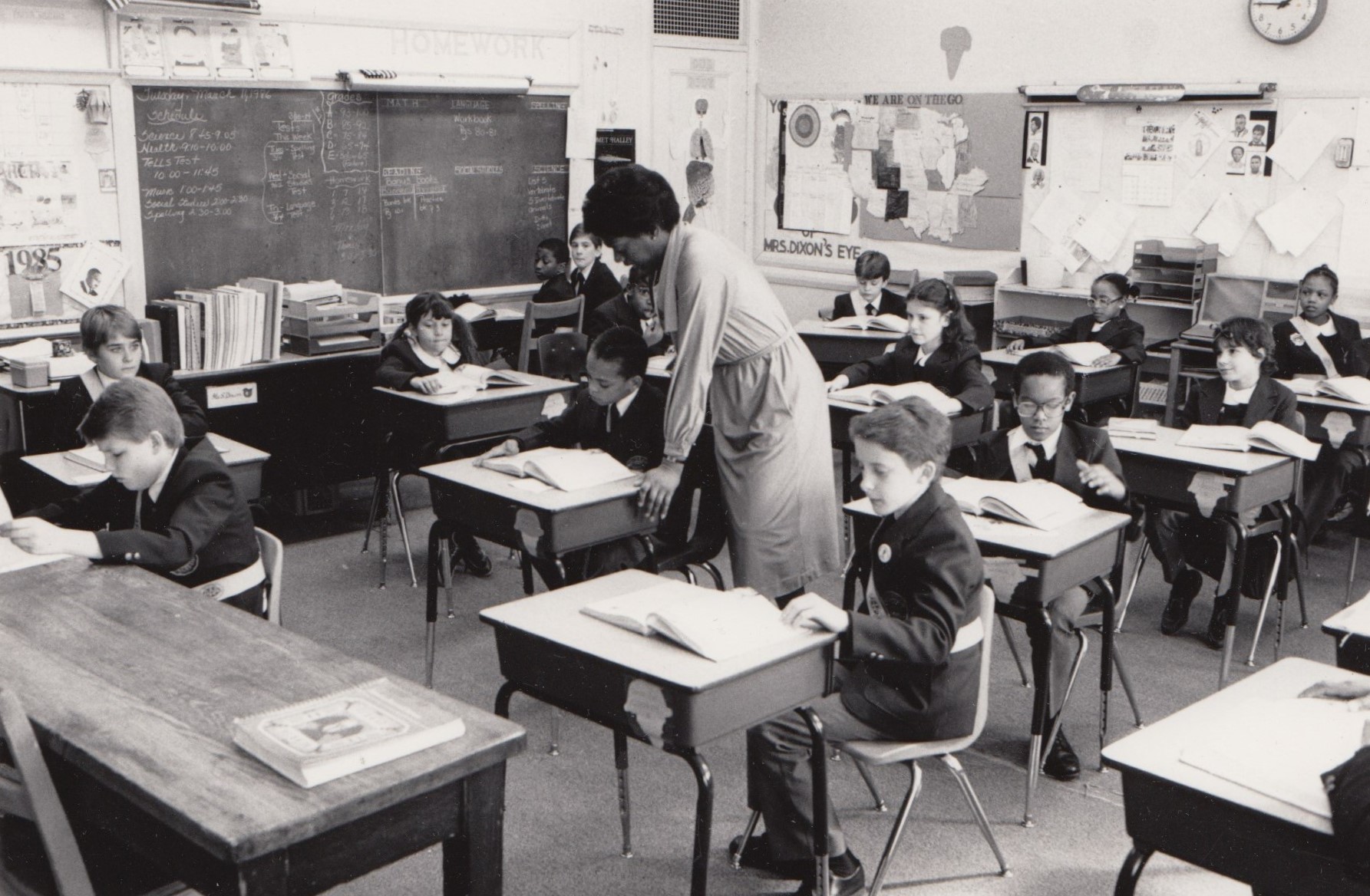 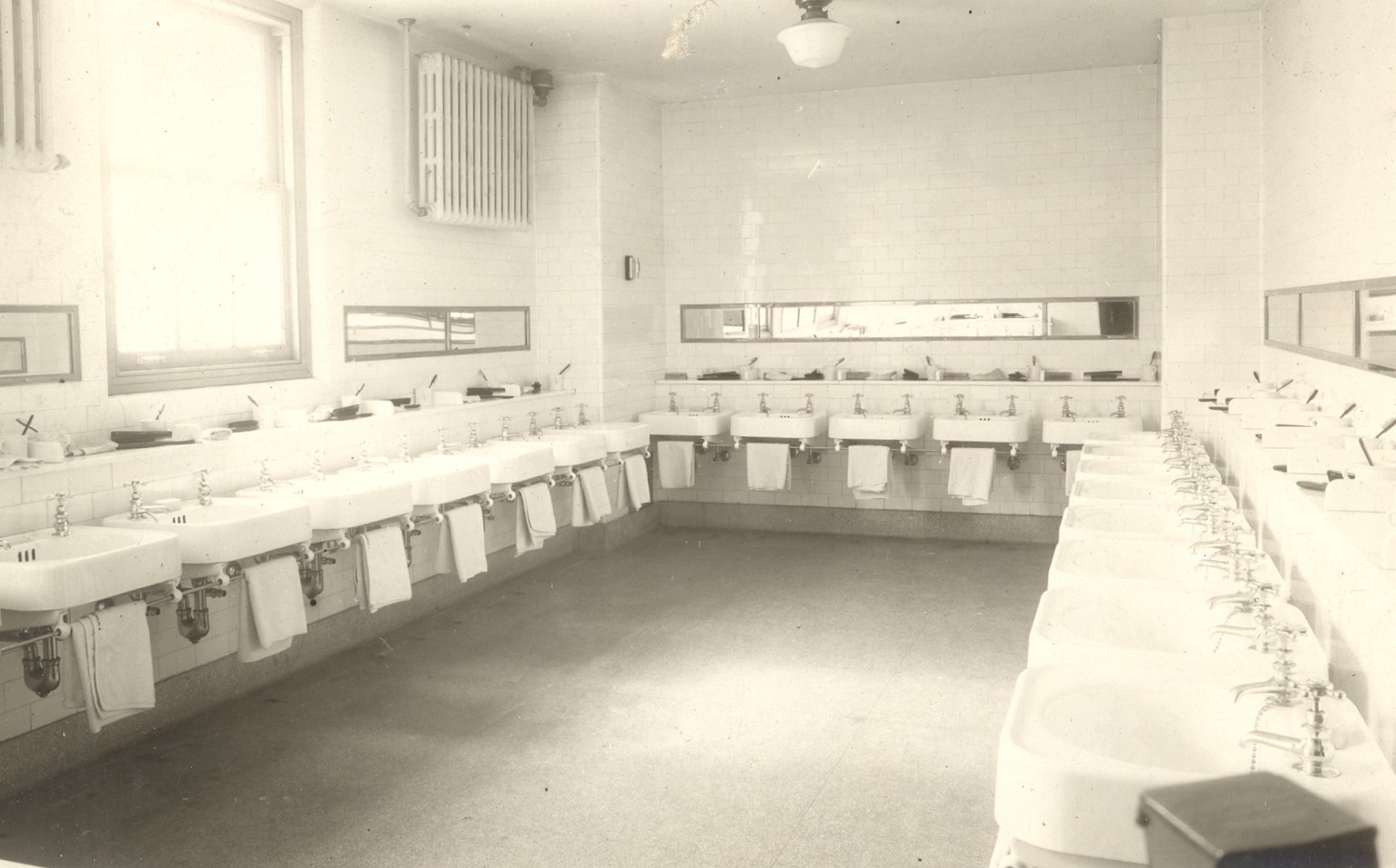 When Girard College opened in 1848, the western half of campus had no college buildings on it and the land where the Junior School now sits was vegetable gardens. However, the school quickly expanded, and in 1877, Building #7, the Primary School, was opened to house and educate the younger students. The brick Victorian Gothic building was designed by architect James H. Windrim ’56, one of the earliest Girard students, who attended from 1850-1856 and later became the designated architect for Girard projects. The Primary School consisted of several connected buildings and was expanded with additional modules in 1912 before being replaced in 1931 by the new Junior School, designed by James H. Windrim’s son, John T. Windrim.

Like the Primary School which preceded it, the Junior School was intended to serve as both school and residential space. Classrooms for grades 1-3 were located in the Junior School, then the students would move up the road to classes for three years of Middle School and one of “Junior High School” in Building #10 (no longer extant) and the High School annex, and finish up with four years of High School. As a dormitory, the Junior School initially provided dormitory space for 396 students, 75 more than the earlier building. In line with other campus construction of the 1920s and early 30s, the Junior School sought both to increase student capacity and to provide a less institutionalized environment. The 1931 annual report lauded the “providing of smaller dining rooms, four in number, for the boys” as well as “the comfort [the building] furnishes, and its homelike atmosphere. The section rooms are provided with fire-places, and the furnishings have included large rugs before the fire-places, and upholstered furniture…”

The new Junior School was shorter and wider than the previous Primary School building, which allowed for more playground space to the west. It also featured playrooms in the basement and recreation space on the roof as well as a large auditorium that could accommodate all the junior school students. An alumni website describes the scene on the playground in the 1940s:

“Junior School playground was like a large “community zoo” with kids running everywhere - fierce sports competition between the Sections in soccer and baseball - flying kites in blustery spring winds - playing in a sand “tent” that was covered with a metal roof - testing how to walk on stilts (wooden poles with elevated foot rests) - scrambling over, around and dropping through the metal-piped cubicles of a Jungle Gym - sliding down the sliding board standing up - hanging upside down with legs through metal rings suspended on chains - seeing how fast two guys could move a seesaw without one falling off - trying to get a swing to go high enough so its supporting chains would be horizontal with the ground.”

Enrollment at Girard College declined after World War II, as with all institutions serving orphans, and beginning in the 1960s it started removing older buildings that were no longer necessary and were not part of the school’s original 1848 construction. The removal of Building #10 (the Middle School), and the residential Good Friends, Lafayette, and West End buildings led to a broader age range being incorporated into the Junior School classrooms and dorms. In 2001, the elementary school classrooms and dormitories were moved to a new Elementary and Middle School complex. Today only the central block of the H-Shaped Junior School is in current use and it houses the high school girls’ dormitories, the student health services, and recreational facilities. The building has been rebranded “the Hum,” commemorating an old nickname (of murky origin) for Girard College.