Smith's Tavern is a famous tavern in Armonk, New York dating back to the Revolutionary War. During the war, the tavern was used as a headquarters for local militia's who were fighting the British. In 1797 militia captain John Smith became the owner of the tavern, making it a stagecoach stop and center of community life in the town of North Castle. The next year Smith was elected town clerk; a position he held for 32 years. His son Samuel succeeded him and served another 24 years. In 1809 John Smith was appointed postmaster and the house served a the post office. Today the house continues to serve the community as the headquarters of the North Castle Historical Society.

a current picture of Smith's Tavern 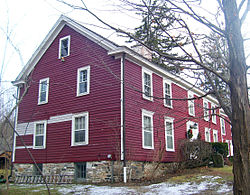 A tombstone on the floor of the Smith's Tavern 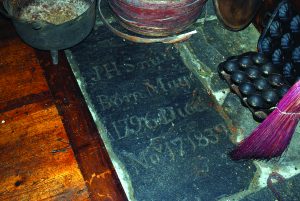 A rope bed in the bedroom of Smith's Tavern 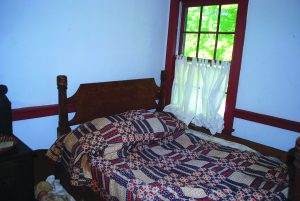 Smith's Tavern is a historical tavern located in Armonk, New York, that dates back to the time of the Revolutionary War. During the war, the tavern served as headquarters for local militias fighting the British. The first known owner of the tavern was Benjamin Hopkins. In 1779 he sheltered refugees from British occupied New York City.

In 1797, the house was sold to John Smith. Smith made the tavern the center of community life in the town of North Castle. During the annual town meeting in 1798, Smith was elected town clerk. Smith would be reelected for the next thirty two years serving until 1830. Town clerk was considered the most important position in local government.

Besides being the center of community life in the area, the tavern became the official town post office in North Castle. The tavern was also the only polling place in town until the 1840s.

When John Smith passed away the tavern was passed down to his son Samuel Smith. Samuel continued the legacy by hosting town meeting until at least 1846. However, in 1847 when the New York and Harlem Railroad was mainly completed, the Danbury stage line shut down. As a result, Samuel closed the tavern shortly afterwards.

Samuel Smith died in 1884 and the property was sold. At one point the house was unsuccessfully turned into a country inn. Since 1977 the tavern has become the headquarters and house museum of The North Castle Historical Society.