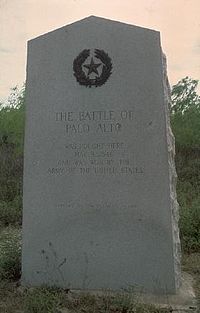 In May of 1846, Mexican General Mariano Arista led his troops in an attempt to flank the American troops during a border dispute. The battle signaled the start of the American-Mexican War. The National Park Service has acquired about a third of the Palo Alto battlefield with the rest belonging to private landowners.