In the days following the first Battle of Manassas, journalists in the north and the south were seeking to define the character of their enemy. The discovery that a modest church in a small town had been desecrated by soldiers became a newsworthy subject, debated on the front page of New York Times. Seven days after the Confederate victory at First Manassas on July 21, 1861, the London Morning Herald’s special correspondent to the Richmond Daily Dispatch, took a tour of the battleground and General James Longstreet’s camp at Centreville. Though unnamed in the article, the correspondent was likely Samuel Phillips Day. During the course of his visit, General Longstreet escorted Day to “the little Episcopal church on the hill.” There, Day “was perfectly horrified upon beholding the sacrilegious manner in which a building devoted to the worship of the Omnipotent had been desecrated and polluted by the enemy.” Drawings and inscriptions written in charcoal covered every wall, even “the very neighborhood of the altar … for in close proximity to it I read the words ‘Death to Traitors — thus saith the Lord!’ This sentiment was accompanied by a sketch of Jefferson Davis hanging from a gallows. Outraged, Day concluded that “there can be no palliation for such a crime.” After reading Day’s account, a New York Times reporter, who wrote under the name “Leo,” denied that Union soldiers were responsible for vandalizing Saint John’s Church. Leo’s story, printed on the front page of the paper, recounted how he had arrived with General McDowell’s column before the battle and found the church littered with straw, an old saddle, and “receipts for horse equipments.” The names scrawled on the walls, “were there before the Union troops ever reached Centreville.” Those who had desecrated the church, concluded Leo, were those who had also desecrated “the altars of patriotism” and been encamped in and around Centreville prior to the Union occupation. Leo didn’t mention the clearly anti-Confederate sentiments described by the British journalist, leaving his readers to determine for themselves whether Day had lied or, if, given the prior desecration by Confederate soldiers, Union depredations could be overlooked. Another Richmond correspondent, however, saw the church and supported Day’s account: The chancel had been torn to pieces. Nearly every spot on the walls, as high as it was possible for a man to reach, was covered with large fire coal sketches and inscriptions, a few specimens of which I will give you. Jefferson Davis is represented as hanging on a gallows with a most disgusting inscription below. In another place he was represented with his arms stretched out, as if nailed to a cross, and lastly he was portrayed as if dropping into a coffin, with the words above, "Old Jeff. going into the box." Above the pulpit, in large letters was "Death to traitors — thus saith the Lord." This reporter, who went by the initials H.R.S., also visited the Old Stone Church: "As I walked from the church with a sad heart, meditating on the deep degradation of fallen nature, I stepped into the hospital where were collected a large number of the wounded Yankees; and there I saw our own people striving to the extent of their ability to retrieve their sufferings and promote their comfort. … I need not say how deeply I was impressed by the contrast which these two churches — less than two hundred yards apart — presented. " But Leo’s account of Centreville also rings true. He gives a detailed description how he found the church copy of the Bible and then walked through town, knocking on doors, to find someone willing to care for it until the church once again resumed its function as a house of worship. It is possible both stories are true and the graffiti that covered the walls was made by Southern and Northern soldiers. Soon enough the atrocities of the war itself would overshadow petty vandalism, and the desecration of an unoccupied church would no longer be regarded as newsworthy. But in the summer of 1861, the thought of men deliberately damaging a sacred place of worship still had the power to outrage and disturb. This was apparent not only on the front pages of the Times, but in the story that circulated in the camps that summer and appeared in letters home. That a Union solider who raised his gun up to smash one of the church windows was killed when the gun suddenly discharged. A member of Longstreet’s staff, Thomas Jewett Goree, wrote to his sister that, “it seems like a just retribution that the man’s name written the oftenest was killed in the battle and buried within steps of the Church he had so desecrated.” Eventually pain and weariness would replace righteousness. By the war’s end, “the little Episcopal church on the hill” was destroyed, without its destruction being recorded by journalists, and leaving little evidence for future historians to debate. 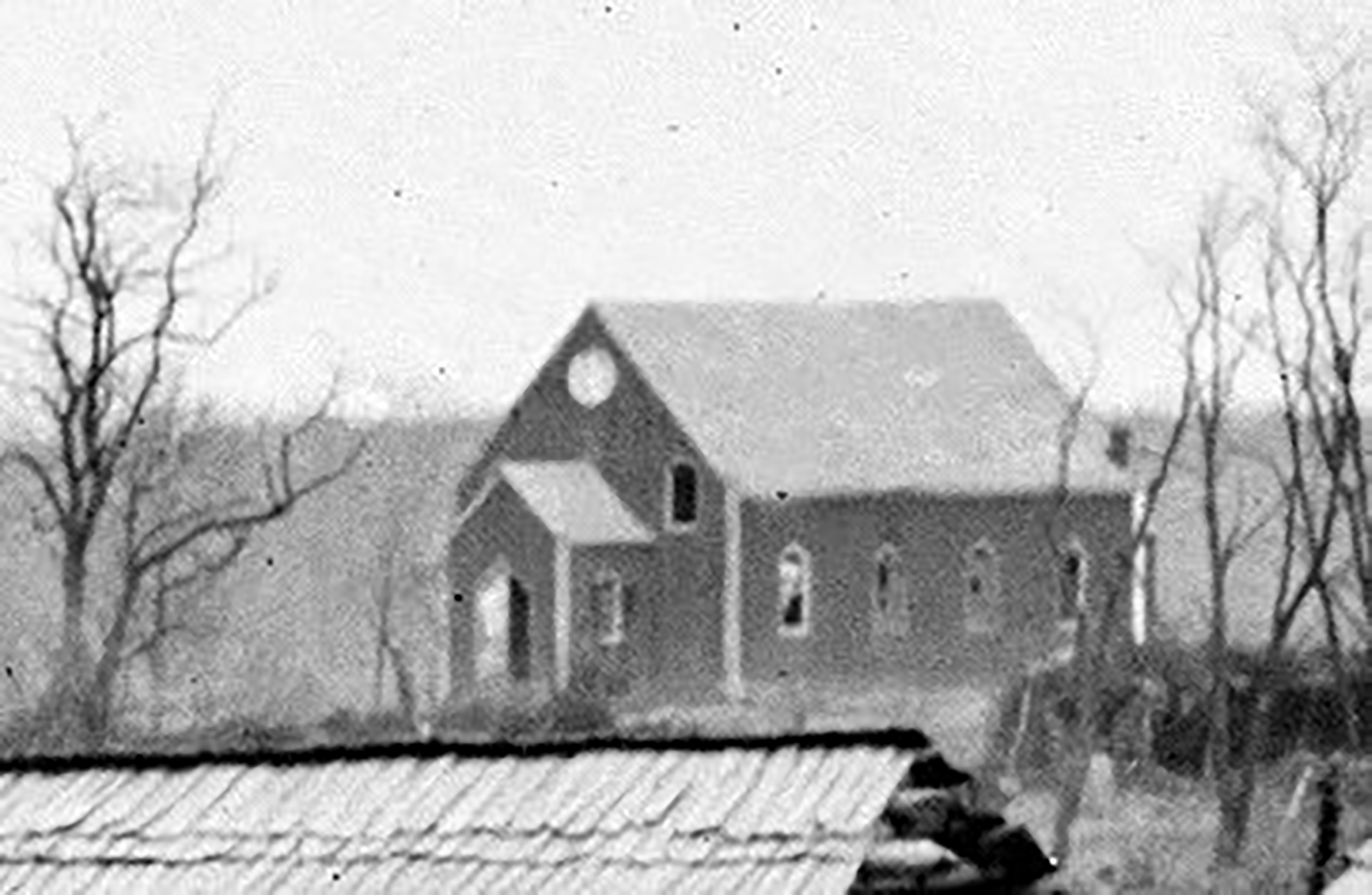 Rocky Run Chapel was the first Anglican Church in the area in 1747, it was located northwest of here, near today's Ormond Stone Middle School. It served the Newgate (as Centreville was then called) community until the Revolutionary War. Associated with the Church of England and colonial rule, the Anglican Church had to be reconstructed into the Episcopal Church and little is known of Rocky Run Chapel in the early 19th century, though there seems to have been some church activity into the 1820s.

Saint John's parish was established in 1844 though the building was not built and consecrated until July 14, 1851. The building you see today stands on the same site as the 1851 church, but that structure was greatly damaged during the Civil War and appeared on an 1866 list of destroyed properties.

Rebuilding began soon after the war ended, in 1867, with $120 allocated from donations by the Piedmont Convocation. Some services resumed as early as 1868 in an as yet unfinished building. The church was completed and consecrated in 1872.

The funds to finish rebuilding the church may have been provided by a man named McGhee. A news story in the Fairfax News on April 10, 1874 gives the following account:

Between twenty-five and thirty years ago a young man by the name of McGhee lived in the town of Centreville-in the capacity of clerk, or store-boy- with a Mr. Deming, then a merchant of that place. As that time Centreville was for the size of it, what may be termed a fast place. Horseracing, card-playing, and an active practice at the bar was very common. Mr. McGhee subsequently found his way into the State of New York, where it is reported, he recently died, devising in his will $20,000 for the purpose of building two Episcopal church edifices in this State, one of which he directed should be put up at Centreville, in this county, thus verifying the poetical idea of a good Providence - "Out of seething evil, educing good."

Church records indicate that the cost of rebuilding was a little more than $2000.

The rebuilt church includes repurposed wood, as evidenced by a door keyhole visible in the ceiling of the sanctuary.

The Machen family of Walney (Ellanor C. Lawrence Park) were very supportive of the Saint John's parish even though they were Presbyterian. James Machen was particularly active in re-establishing the church after the Civil War along with Frank Stringfellow. Stringfellow had been a spy for the Confederate Army and his association with the Green family of Alexandria was part of the fictionalized plots of the PBS series Mercy Street. Frank went on to be ordained and worked to establish other churches in the area. James Machen and his wife are buried in the church yard.

The c. 1867 portion of the church is a Gothic-Revival style front-gabled structure. The primary fascade is symetrically balanced with an entrance door leading into a vestibule with pointed windows on each side. The 2/2 windows each have gabled roofs. The open rakes of the church and vestibule roofs are decorated with simple vergeboards. The wood-framed one-story structure is clad in covelap siding with capped cornerboards. The building is three bays wide and four bays deep. A modern wing was added to the southwest.