Built in 1922, Mabel Dodge Luhan House, which is sometimes referred to as the "Big House" is a standing representation of art and humanities patron and writer, Mabel Dodge Luhan (1879-1962). Madel Dodge is known for her contributions to the Taos art colony and she had a significant presence in the 20th-century literary and art scene with her affiliation with the Taos art colony. At the Big House, Dodge Luhan would host literary gatherings and invited prominent literary and art figures to stay at the house, such as D.H. Lawerence, Aldous Huxley, Georgia O' Keefe, Ansel Adams, and Willa Cather. At these gatherings, she would introduce them to the Native American and pre-Colombian artwork done in Taos, resulting in Taos being put on the map and its art influencing people nationwide. In 1978, the Mabel Dodge Luhan House was listed in the National Register for Historic Places for its Pueblo architectural style and its connection to Mabel Dodge Luhan and her contributions to the Taos art colony. Currently, the house is now a hotel equipped with rooms named after famous literary and artistic figures and Luhan's friends, a conference room for workshops, and dining for guests. 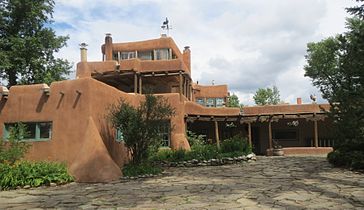 Mabel Dodge Luhan: The Savior of the Arts 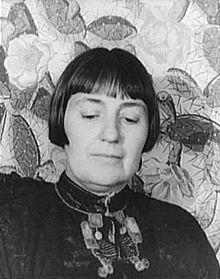 The House's Entrance: Entering into History 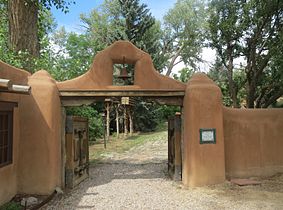 The Outside Beauty of the House's Overview Deck 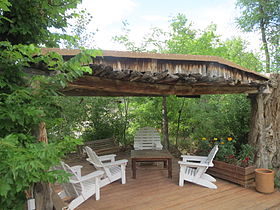 The Art of Nature: The House's Garden 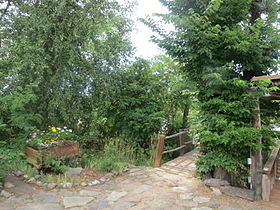 Born on February 26, 1879 in Buffalo, New York, Mabel Ganson was the daughter of Charles Ganson, a wealthy banker and Sarah Cook.Throughout her earlier years, Mabel grew up among Buffalo's social elite, and her parents, who lived off an inheritance, lavishly provided for her. Yet, the Ganson family was also conservative and wanted to groom Mabel for marriage. The conservative mindset along with her family's emotional and spiritual neglect of Mabel clashed with her forward-thinking attitude and liberal ideals of women's societal roles. In 1900, Mabel married local sportsman, Karl Evans, but he died two years later in a hunting accident, leaving behind Mabel and their son, John.

In 1904, Mabel married wealthy architect, Dr. Edwin Dodge, and the couple along with John moved to Florence, Italy. While in Florence, Mabel (now Dodge) began tor event herself by hosting and entertaining famous American in her salon. Mabel soon met American writer, Gertrude Stein and her brother, Leo, who was a an art critic and collector. Stein introduced her to the possibility of constant self-regeneration through art. In 1912, Mabel, along with John moved from Florence to New York City due to feeling uninspired with Florence and the fact her and Edwin became estranged; she eventually divorced from him in 1916. Mabel began with her involvement with the art scene through hosting small gatherings in her New York apartment. Some of the guests included journalist John Reed, anarchist political activist, Emma Goldman, and novelist Neith Boyce. Soon, Mabel Dodge became a journalist for the Hearst organization, a an American mass media and business information conglomerate based in New York. In 1916, Mabel married her third husband, artist, Maurice Sterne.

Maurice and Mabel moved to Taos, New Mexico, and Mabel began to take interest in the Native Americans in Taos and their artwork. The marriage between the two was an extremely unhappy one, resulting in Maurice leaving Taos and the divorcing in 1921. Mabel befriended and married Taos local, Tony Luhan. In 1922, with Tony Luhan's supervision Mabel's 12-acre property in Taos was converted into the Mabel Dodge Luhan House. Some people often referred to the house as the "Big House" due to its 20+ rooms. The Pueblo-style, three-storyhouse includes earth-tone adobe walls, glossy tilework, and intricate designs inspired by Taos artist, Ralph Myers. Mabel (now surnamed Dodge Luhan). One room in particular is called the Rainbow Room due to the walls being painted in vibrant colors. Mabel utilized the house as not only her living quarters, but also a gathering place for her friends. Dodge Luhan's guests included artists and writers, such as D.H. Lawerence, Aldous Huxley, Georgia O' Keefe, Ansel Adams, and Willa Cather. Dodge Luhan introduced her guests to Taos artwork, which highlighted the Native American and pre-Colombian craftsman showcased in the area. Mabel Dodge Luhan took the lead in promoting the Southwest as Utopia; offering her literary and artistic friends an antidote to civilization. She succeeded in putting Taos on the map by appealing to the aesthetic, emotional and spiritual needs of her friends. Luhan often described herself as a patron and savior for the arts and humanities. In 1935, Mabel Doge Luhan released her memoir, Winter in Taos about her life in Taos, her failed marriages, and her love for the arts.

In 1954, Mabel moved out of the Big House and built a much smaller house a half-mile from the Big House. At one point, British actor Dennis Hopper bought and owned the house. In 1962, Mabel Dodge Luhan died in 1962 and was buried at the In 1979, the Mabel Dodge Luhan House was listed on the National Register for Historic Places for its Pueblo architectural style and its connection with Dodge Luhan and her contributions to the Taos art colony. Later, the house became a hotel where guests can stay in one of the rooms named after Dodge Luhan's friends; examples include Cather (Willa Cather) and O'Keefe (Georgia O'Keefe). Also, guests can dine, attend to workshops in the conference rooms, and buy merchandise in the gift shop.