The Old Croton Dam, built to supply New York City with clean water after a series of disease outbreaks and unattended fires threatened the city’s growing population in the 1830s, was the first large masonry dam built in the United States. Begun in 1837 and completed in 1842 under chief engineer John Bloomfield Jervis, the 670-foot long dam stretched 57 feet above the ground. The dam, and the 400-acre reservoir of the Croton River in Yorktown in northern Westchester County that it created, connected to a receiving reservoir in Manhattan’s Central Park and finally a distribution reservoir on Fifth Avenue and 42nd Street (where the New York Public Library presently stands) via the 42-mile Old Croton Aqueduct, which ran mostly underground. In 1893, the Old Croton Aqueduct was replaced with a newer one, and in 1906, less than seventy years after it was built, the Old Croton Dam was submerged in order to create a larger one of almost double the size. The site of the Old Croton Dam was added to the National Register of Historic Places in 1973, and the Old Croton Aqueduct was added in 1974. 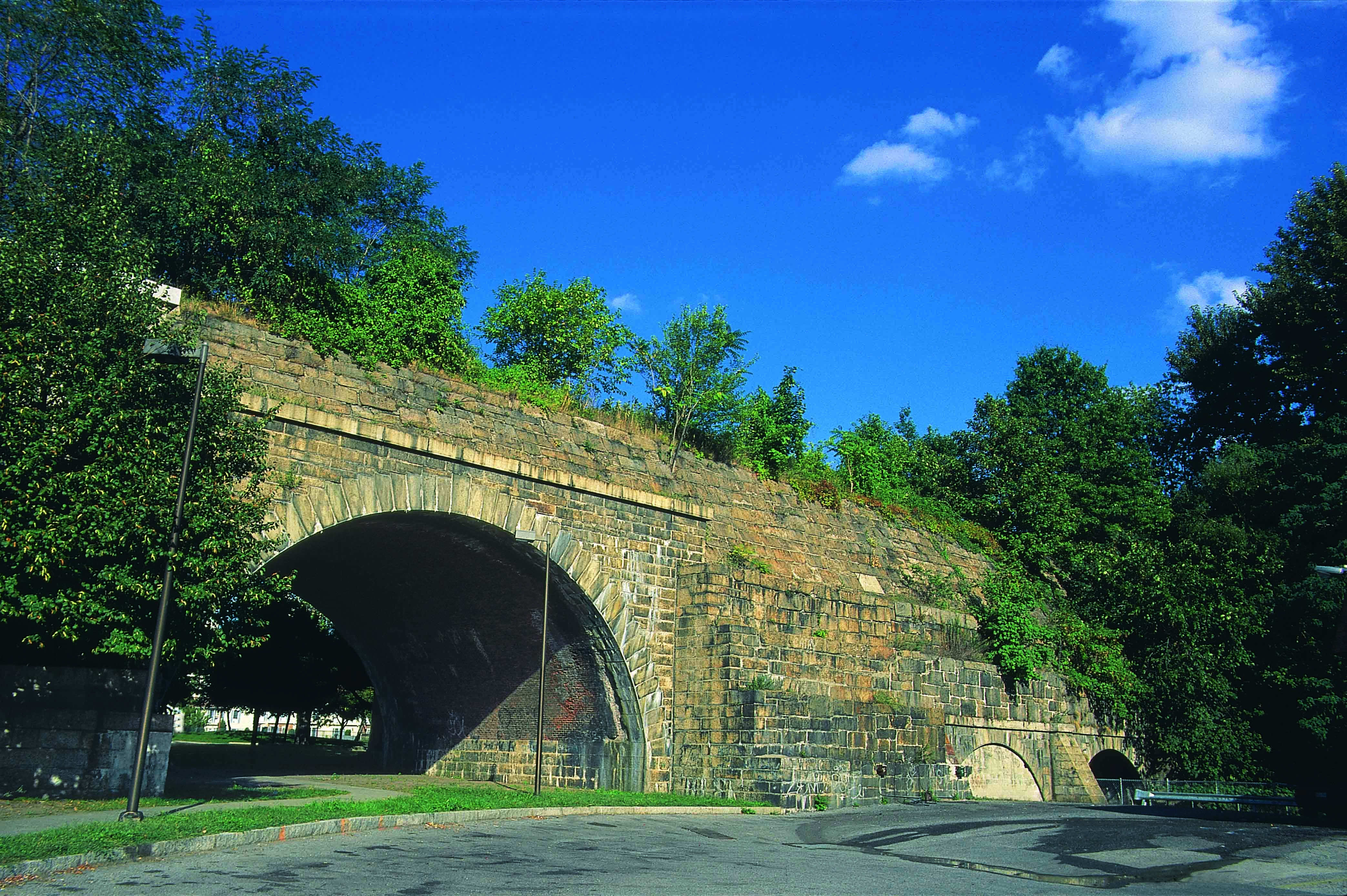 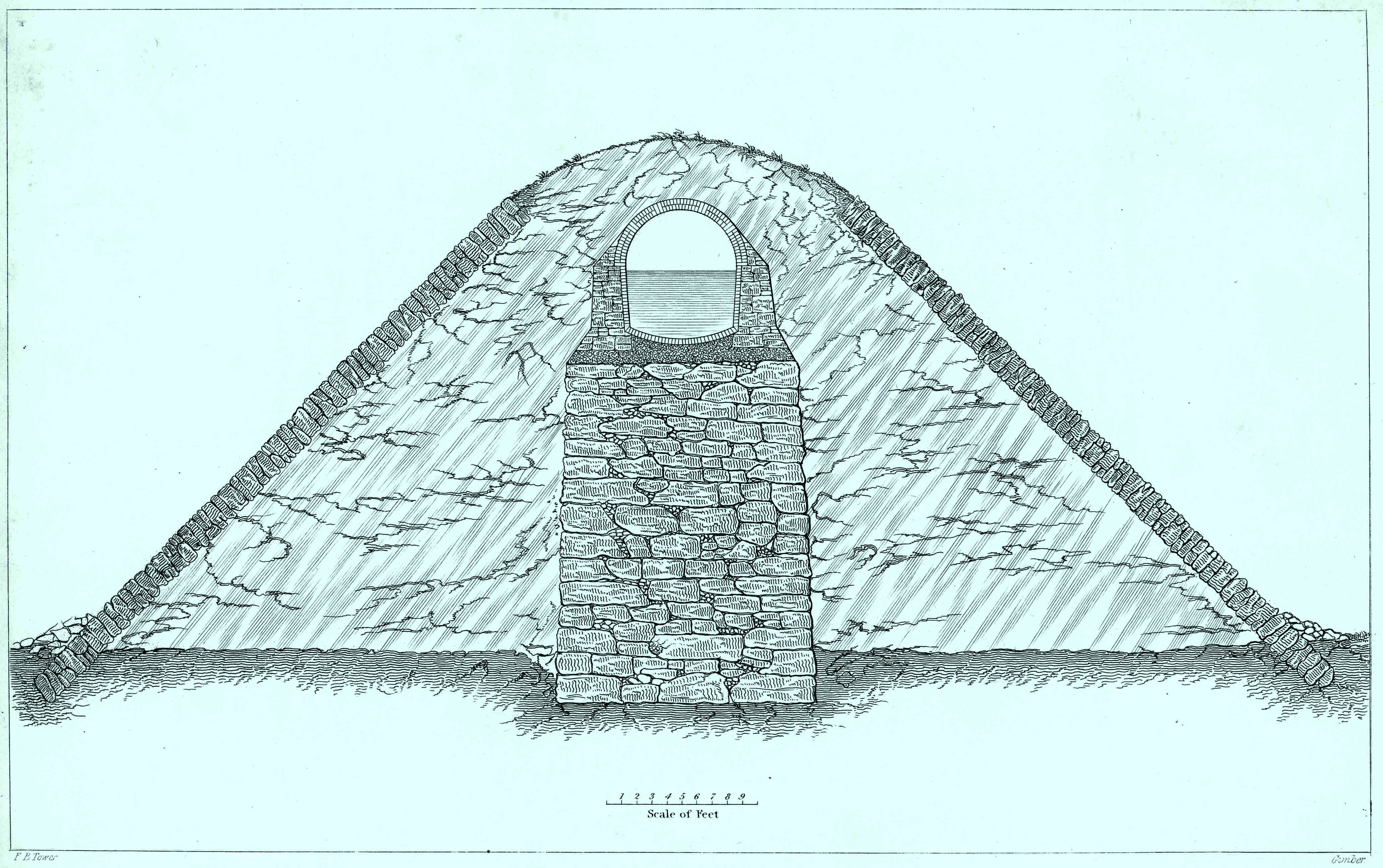 Ventilator on the Old Croton Aqueduct. 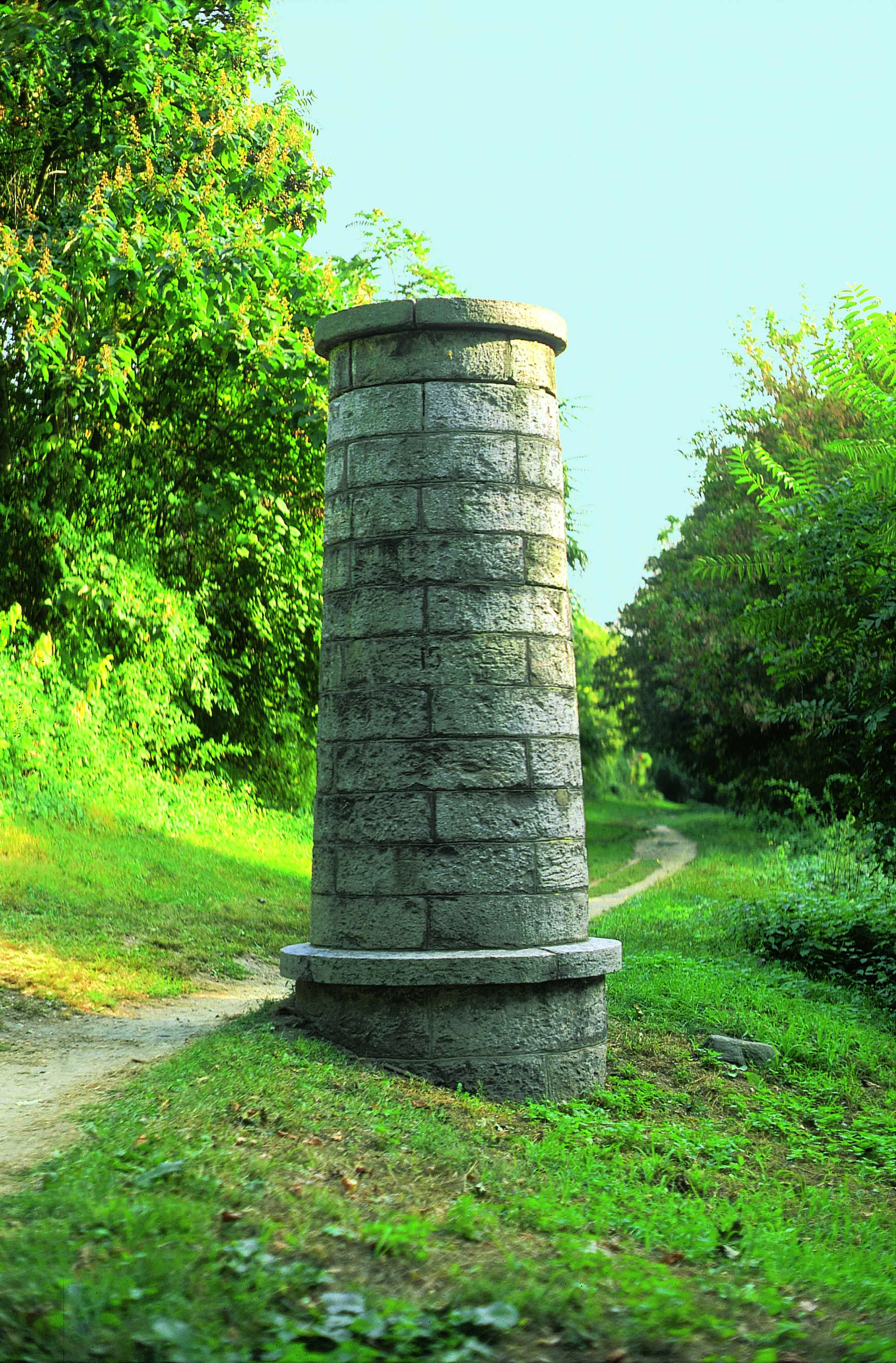 An 1852 engraving of the Old Croton Dam. 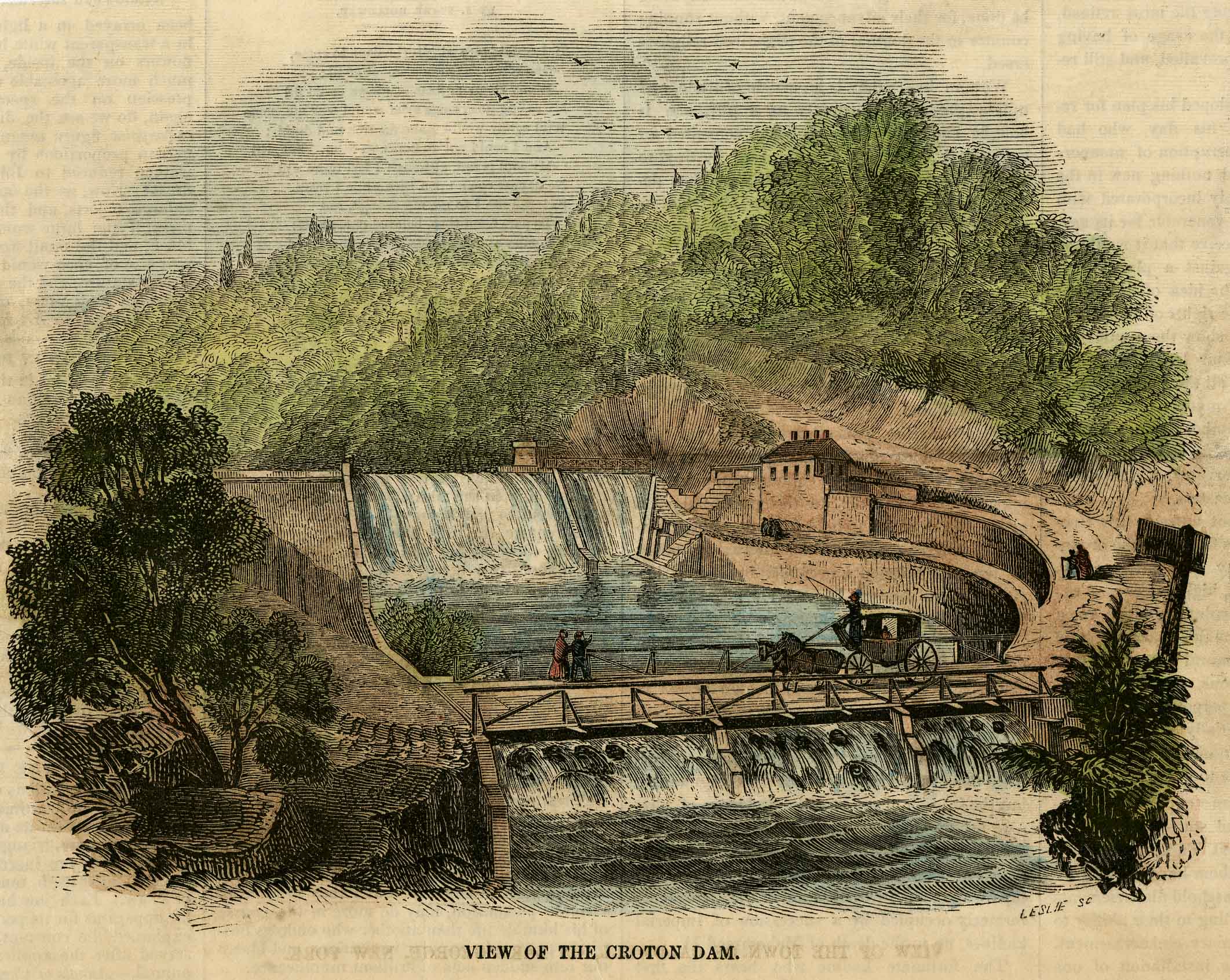 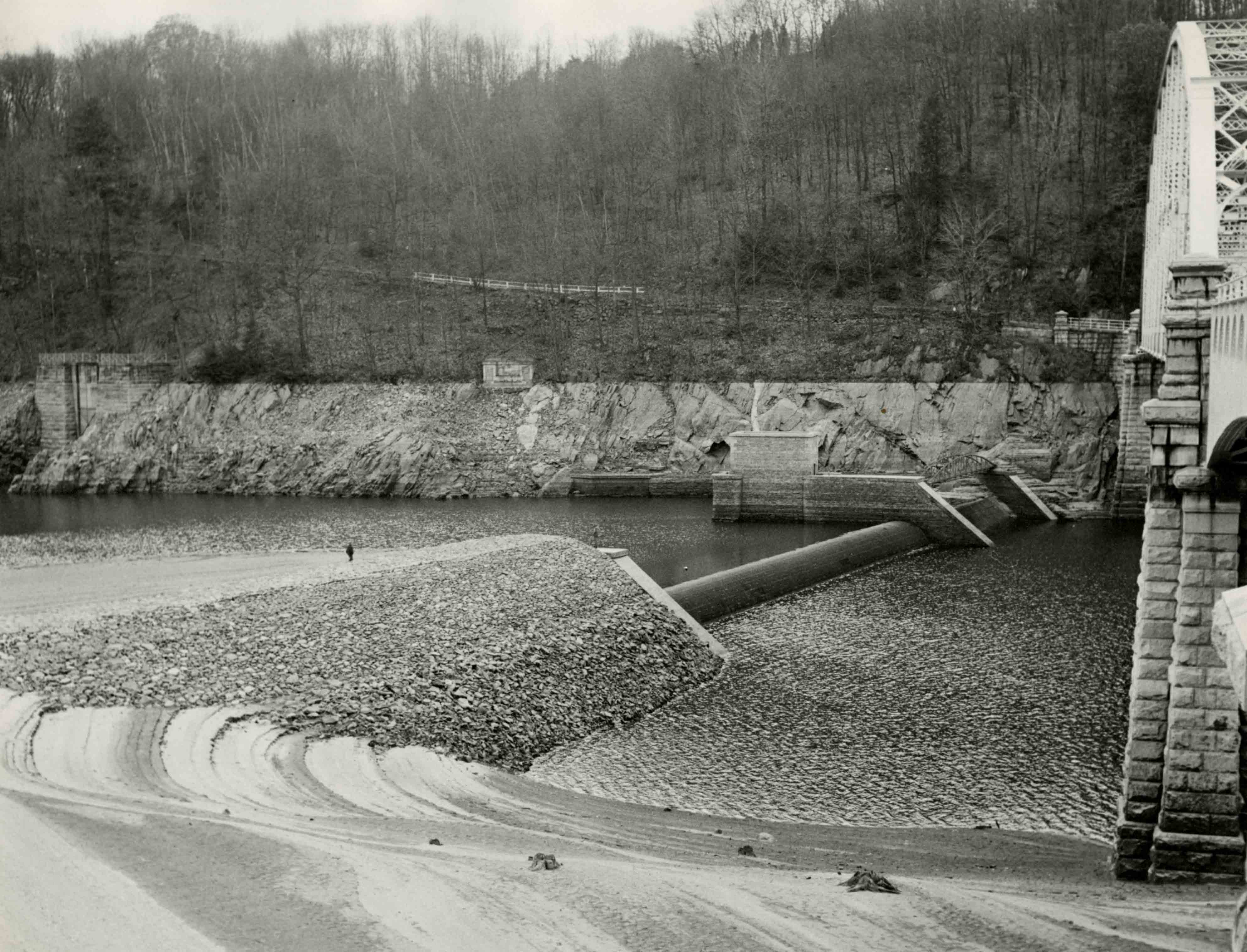 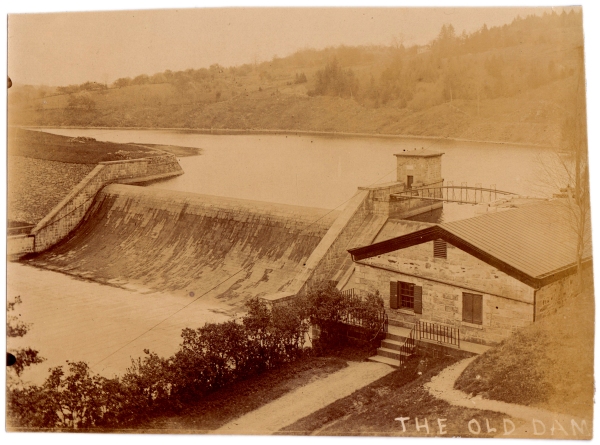 In 1835, residents of New York City voted to approve the building of a dam, aqueduct, and reservoirs to supply the city with fresh, clean water in response to a crisis that had become increasingly dire: the city’s internal water supply was too polluted and inadequate to meet the growing needs of its population. In 1837, the New York State legislature authorized the purchase of the land required to build the dam, its reservoirs, and the connecting aqueduct.

The Croton River in Westchester County was chosen as the main source of the water supply, and its narrowest span in Yorktown, approximately 35 miles north of Manhattan, was selected as the location for the dam. The aqueduct that would connect the dam and Croton reservoir to two reservoirs in New York City was designed to run mostly underground, with some features located above ground. In order to accommodate this path, as well as the reservoirs, many houses, barns, outbuildings, mills, roads, and bridges were moved, or in some cases intentionally flooded, in response.

There was one unintended flood during the construction of the dam that occurred in 1840 when eighteen inches of melting snow, combined with heavy rainfall, caused the reservoir waters to rise seventeen feet above the threshold. The dam, which had been built to accommodate twelve extra feet, succumbed to the rush of water, causing significant damage and resulting in the loss of three lives. It was rebuilt, and the dam was completed two years later.

The underground aqueduct system was a big tube of brick and stone, stretching seven-and-a-half-feet wide and eight-and-a-half-feet high. Held together with water-resistant hydraulic cement, the aqueduct was mostly invisible, but large raised culverts were built in several places to cross over roads and major streams. Stone chimney-like ventilators that provided fresh air could be seen in places, and cast-iron guard gates and frames, which were used to control the flow of water through the aqueduct, were found occasionally along the route of the tunnel, protected by gatehouses. Much of the original aqueduct path can be enjoyed now as the Croton Aqueduct Trailway, a New York State Park that stretches from Croton into New York City.

The Old Croton Dam and Aqueduct were architectural marvels for their day. The Old Croton Dam served as the prototype for a number of masonry dams (vs. concrete) of the mid-nineteenth century, and was considered an outstanding engineering landmark. Presently submerged, although somewhat noticeable when the levels of the reservoir are very low, it remains notable as an intact underwater archeological site. The Old Croton Aqueduct was an extensive work stretching for over forty miles, excelling ancient Roman aqueducts in its cross-section dimension and in the use of the siphon.

The Croton system was originally expected to serve New York City forever, but by 1890 a new dam had to be built. Construction began on a New Croton Dam in 1893 and was completed in 1906. The original aqueduct was replaced by a wider one that ran adjacent to the original track. The new Croton Dam system continues to provide approximately ten percent of New York City's water today.