In Huntington’s early days, several busy hotels were clustered along the downtown portion of Ninth Street. One of these hotels was the Adelphia Hotel, which opened in 1893. The hotel was originally located at the corner of Ninth Street and Sixth Avenue, before it was destroyed by fire on July 2, 1901. After the building burned, the owners decided not to rebuild at that location, and instead relocated the Adelphia to the northwest corner of Ninth Street and Fifth Avenue. Another hotel, the Hotel Huntington, later opened in 1910 at the Adelphia’s original location. The Adelphia Hotel became a familiar part of the downtown landscape over the years, flourishing during the city’s early twentieth-century heyday and even surviving a fire on Christmas Day of 1950. By the 1950s, however, the Adelphia had become a primarily residential hotel, and shut its doors not long after. The hotel was demolished in 1977 to make way for construction of the Cabell County Public Library.

The original Adelphia Hotel, circa 1900 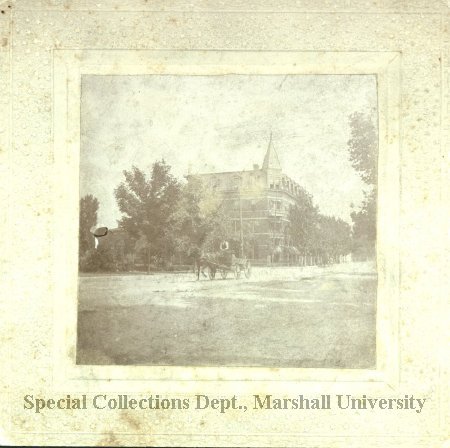 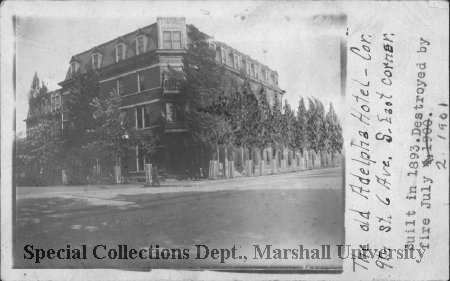 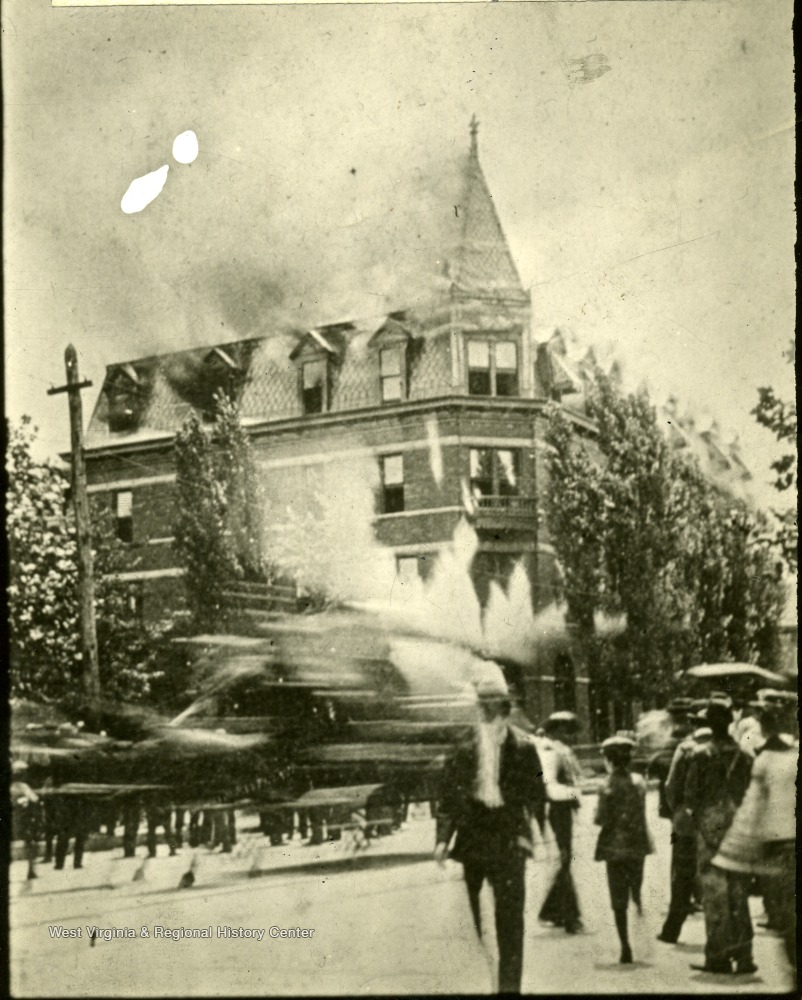 Ad from the Marshall College Parthenon, 1899

Postcard showing the Adelphia's second location, at left, across from the old Carnegie Library 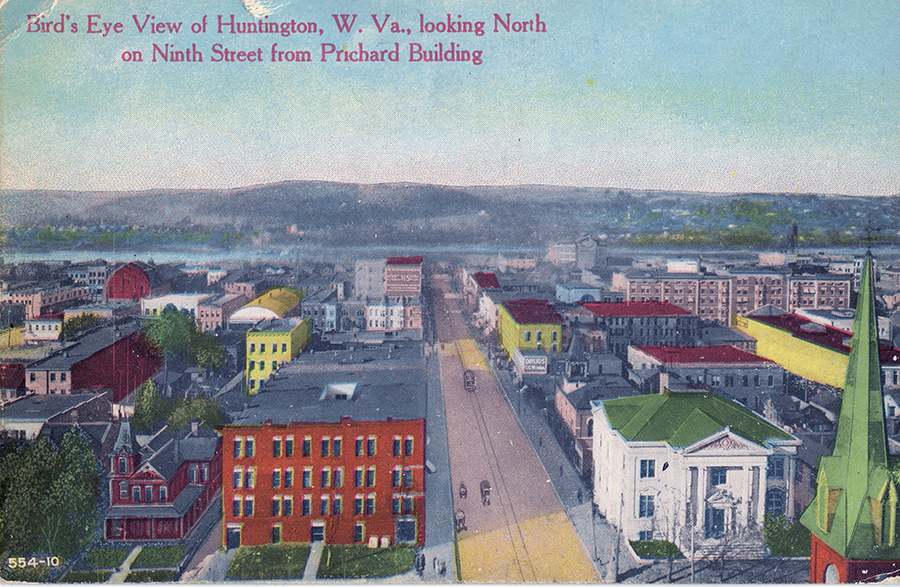 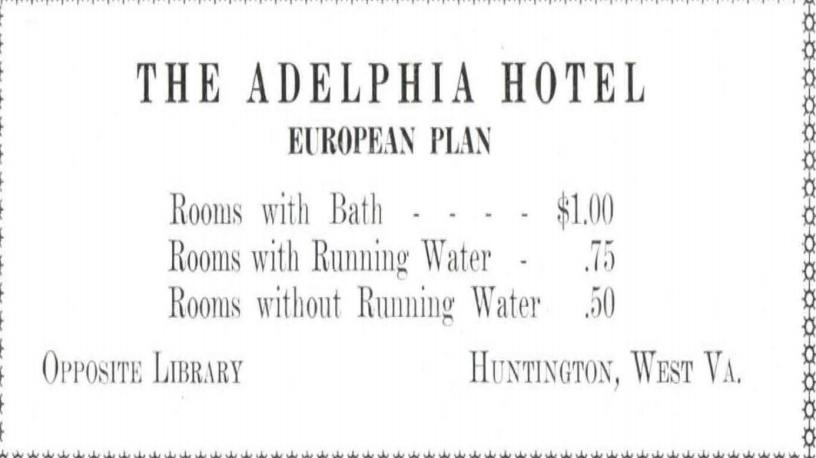 Firemen fight the fire at the Adelphia on Christmas 1950 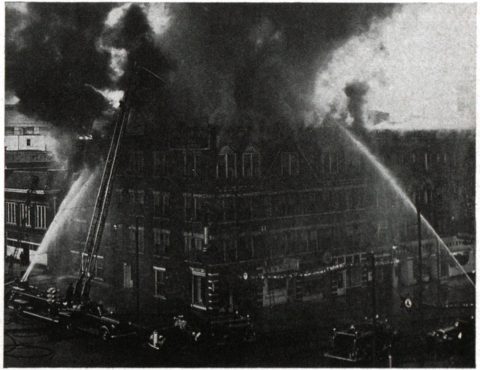 Aerial view of the fire on Christmas Day 1950 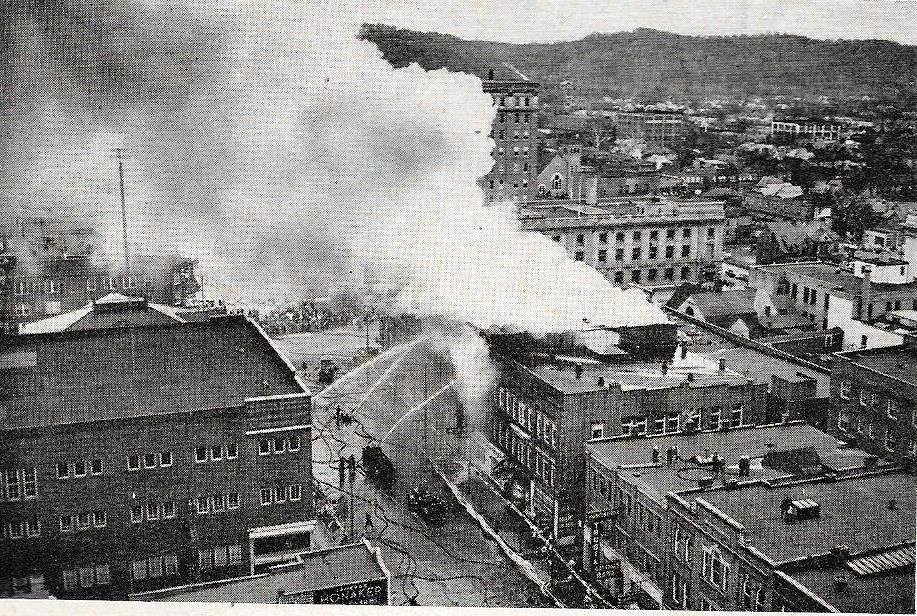 The Adelphia Hotel building in 1951 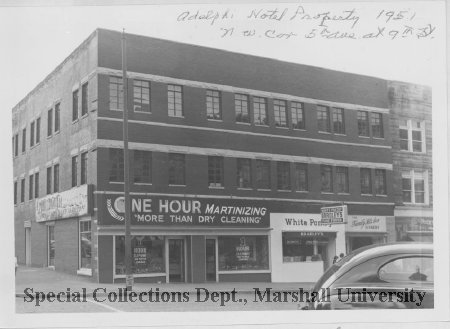 A band marches past the Hotel Adelphia 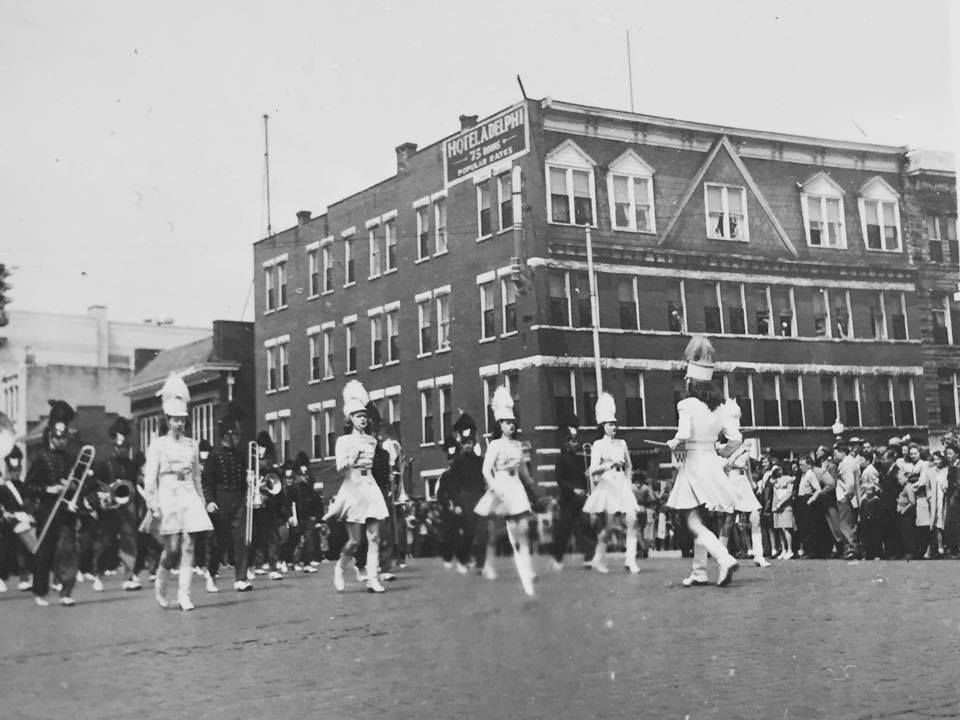 Demolition of the Adelphia Hotel in 1977 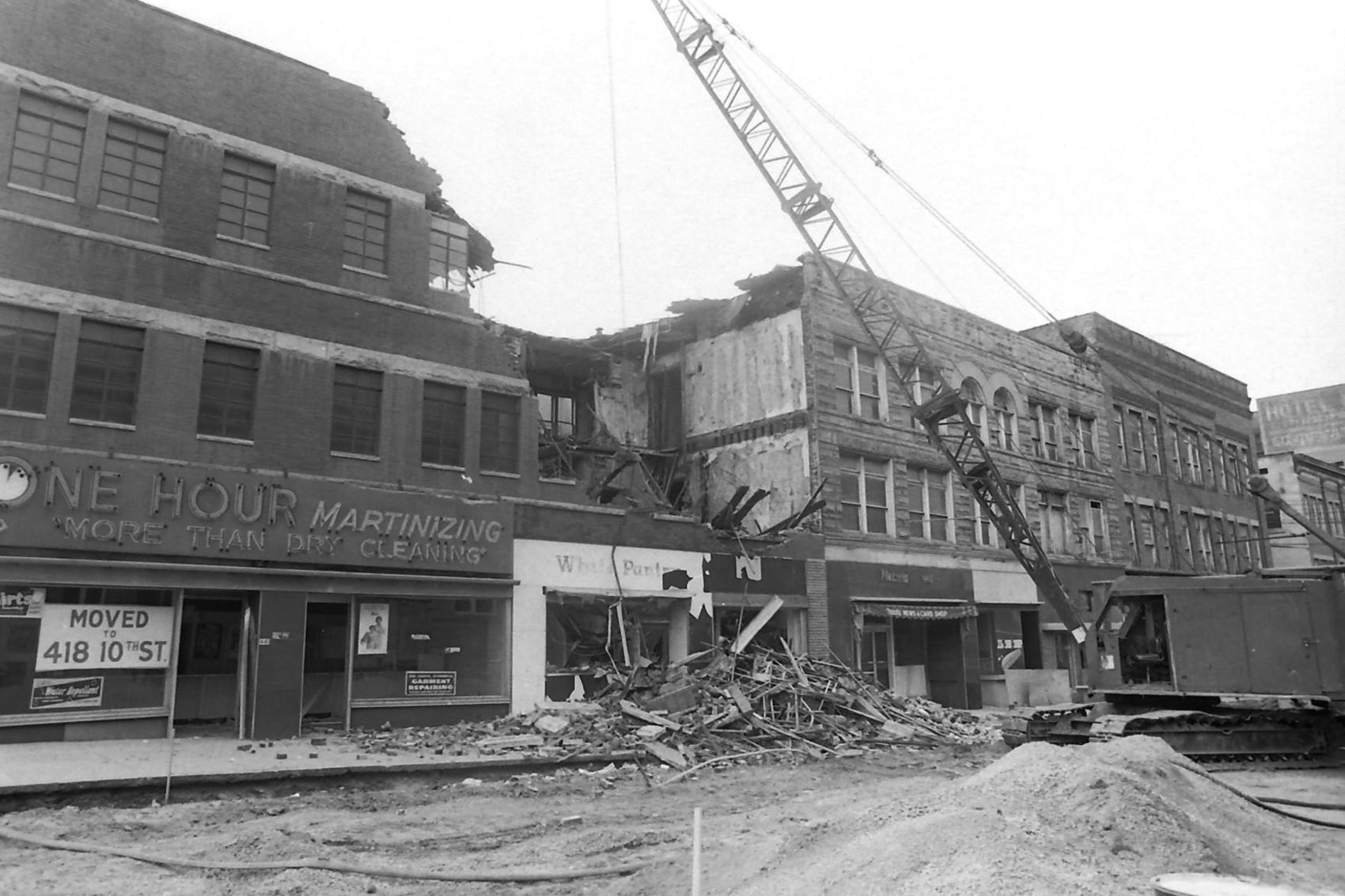 From its founding in 1871, Huntington served as a gateway to and from the southern coalfields of West Virginia, with manufactured goods flowing both ways. The city began attracting other businesses and services, including hotels that catered to the needs of traveling salesmen and other visitors. Soon, busy hotels like the Florentine and the Carolina were clustered along Ninth Street in downtown Huntington. The Adelphia Hotel became part of this early hotel district when it was constructed in 1893 at the southeast corner of Ninth Street and Sixth Avenue. The hotel was founded by businessmen Hansford Watts and Walter Davis. Watts went on to become a prominent builder in Huntington, and was responsible for the Fifth Avenue Hotel, built circa 1910, and the Watts apartment building, built around 1920.

When it opened, the Adelphia Hotel was an up-to-date hotel that had no trouble attracting customers. Disaster struck, however, when the hotel caught fire on July 2, 1901. According to the Pittsburgh Daily Post, the scene of the fire, which broke out on the Adelphia’s fifth floor, was chaotic: “The hotel was filled with guests, including many women and when the cry of ‘fire’ was raised general terror reigned. Fainting women by the dozen had to be carried out and some guests tried to jump from windows.” When firemen arrived at the scene, they discovered that the city reservoir and pipes were empty because the pumps at the local water plant had broken down the night before. To make matters worse, the city’s fire engines were in the shops for repair at the time. Eventually, several neighboring towns sent fire engines to Huntington’s aid, and the firemen were able to prevent the blaze from consuming more of the surrounding structures. The hotel, with a large brick annex, half a dozen residences, a livery stable and several other buildings, were all burned to the ground in the fire, totaling a loss of $200,000.

After the fire, the owners of the Adelphia decided not to rebuild the hotel at the same location. Instead, they purchased the Carolina Hotel, a four-story, red brick structure on the northwest corner of Ninth Street and Fifth Avenue. After a bit of remodeling, the Adelphia reopened a block north of its original site, where it would become a familiar part of the downtown landscape. The hotel benefited from Huntington’s economic growth between 1900 and 1930, as new businesses opened and construction within the city flourished. Other hotels also opened for business, including the Frederick Hotel (1906), the Fifth Avenue Hotel (1910) and the Hotel Farr (1918), all of which were concentrated in downtown Huntington along Third and Fourth Avenue. In 1910, the elegant Hotel Huntington was built on the original site of the Adelphia. The Adelphia competed with the new hotels, offering rooms with a bath for $1 per night, rooms with running water for 75 cents per night, and rooms without running water for 50 cents per night, according to an ad from 1917.

Although Huntington continued to grow into the early 1960s, the popularity of the aging Adelphia Hotel could not keep pace. By the 1950s, the Adelphia was primarily a residential hotel that housed a handful of elderly tenants rather than overnight guests. This was the case when another large fire broke out at the hotel on Christmas Day of 1950. Hotel clerk J. E. Chambers was at his desk at about 2 p.m. when he noticed sparks falling down a nearby elevator shaft. He immediately called the fire department, who battled the flames for several hours. While the roof of the hotel was damaged and the ground floor businesses suffered substantial water damage, no guests were hurt in the fire because most were away having their holiday dinners at the time. After the fire, the Adelphia did not remain open for very long, though the exact date of its closing is unclear. In 1977, the old hotel was demolished to make way for the new Cabell County Public Library. The businesses located on the Adelphia’s ground floor - One Hour Dry Cleaners, Nick's News, and the White Pantry - were also demolished at that time.