Camp Hale was a camp utilized during World War 2 in Colorado. It's purpose was to train military personnel in winter and mountain situations. A major amount of training was conducted in the East Park Valley. During World War 2, many different outfits were sent here to train for the atmosphere they were about to be a part of overseas. Now it is part of a project that is trying to clean up the site of hazardous military materials. 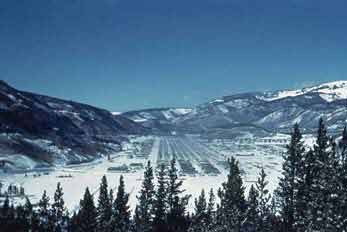 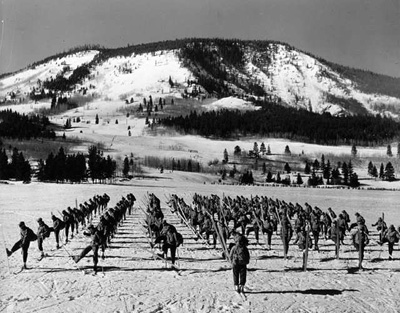 Camp Hale was a military training facility constructed in 1942 in Colorado. It's main purpose was to give soldiers a sense of what combat was going to be like overseas. Camp Hale was named for military General Irving Hale. It was home to Tibetan soldiers that the CIA was training from 1959-1963.

Camp Hale was able to hold up to 12,000 men while it was in operation. It's conditions were harsher than most other military camps, due in part to the rough layout of the land and the elevation.(2) Trainees there were taught how to ski, in an attempt to gain an advantage overseas in WW2. However, many trainees who were not brought in because of their interest in skiing hated it.(2) Besides its use for training soldiers, it was also used for a POW camp that housed over 400 detainees in the 40's. (1)

Today, Camp Hale is part of a project to clean up hazardous materials in military bases. Leftover munitions are found everywhere throughout the area in which Camp Hale was located. These are potentially hazardous, and several groups are working to get government funding to clean up such sites. Camp Hale was once a crucial part in the training of military personnel, and useful in containing war criminals. Residents welcome visitors to the area and are proud of the history of the camp, but due to the remaining munitions it is dangerous in certain areas of the camp.