Established in 1963 at the northwest corner of Eighth Street and Ninth Avenue, Dwight’s Drive-In was once a beloved Huntington eatery. The family of founder Dwight Messinger had been in the restaurant business for years, operating several drive-in restaurants since the 1950s. The family's first drive-in was known as Adkins Fat Boy. The family's later dining concept, Dwight’s Drive-In, was even more successful thanks to menu items like the Kingburger, the Brawny Lad, and the Husky steak sandwich along with hand-battered onion rings, fresh coffee, and strawberry pie. In 1971, a second location opened on First Street and joined the Dwight’s of Eighth Street as a popular late-night hangout and cruising spot for local teens. After years as a Huntington mainstay, the original Dwight’s closed in 1995 and the First Street location followed suit in 2003. While both drive-ins in Huntington have closed, Dwight's Restaurant in Saint Albans has been in business since 1993. 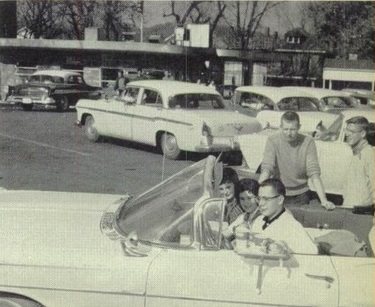 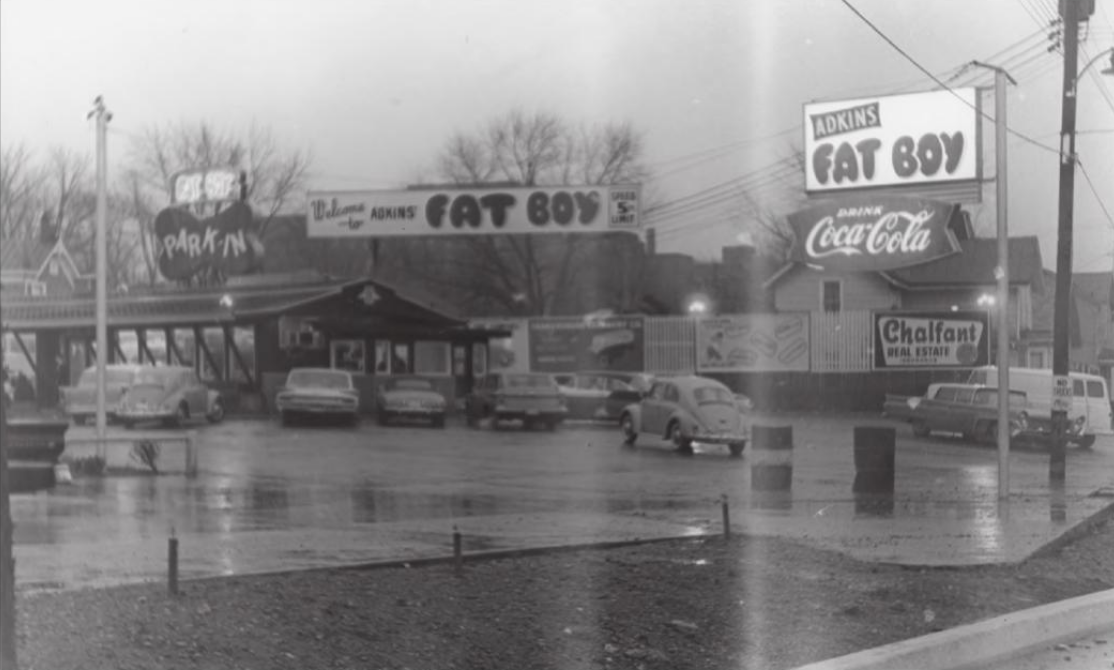 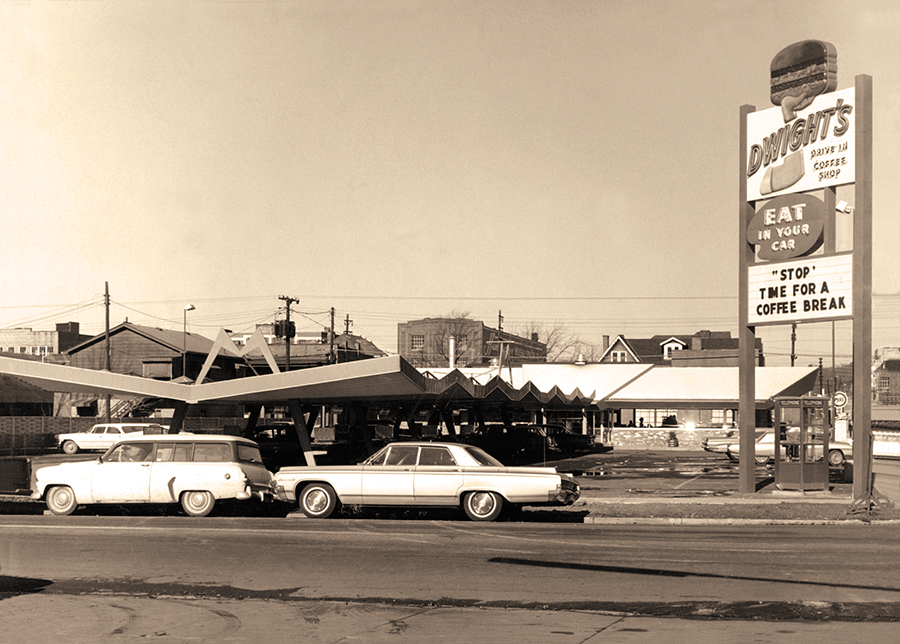 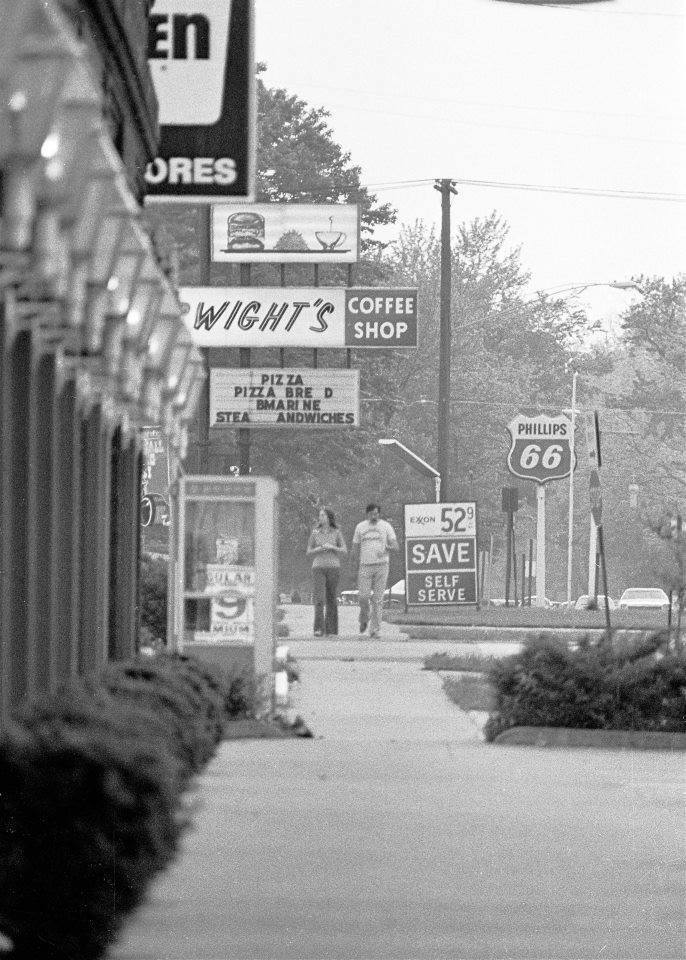 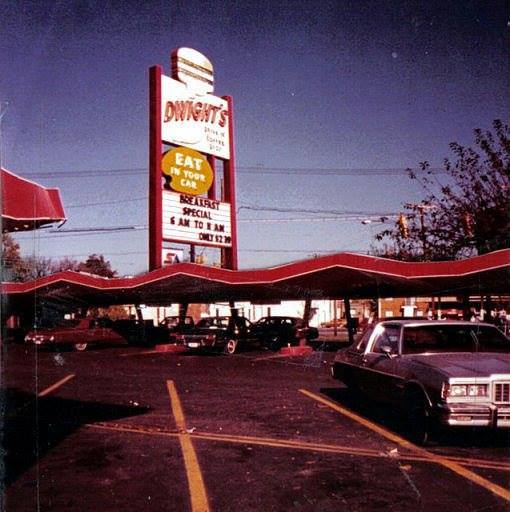 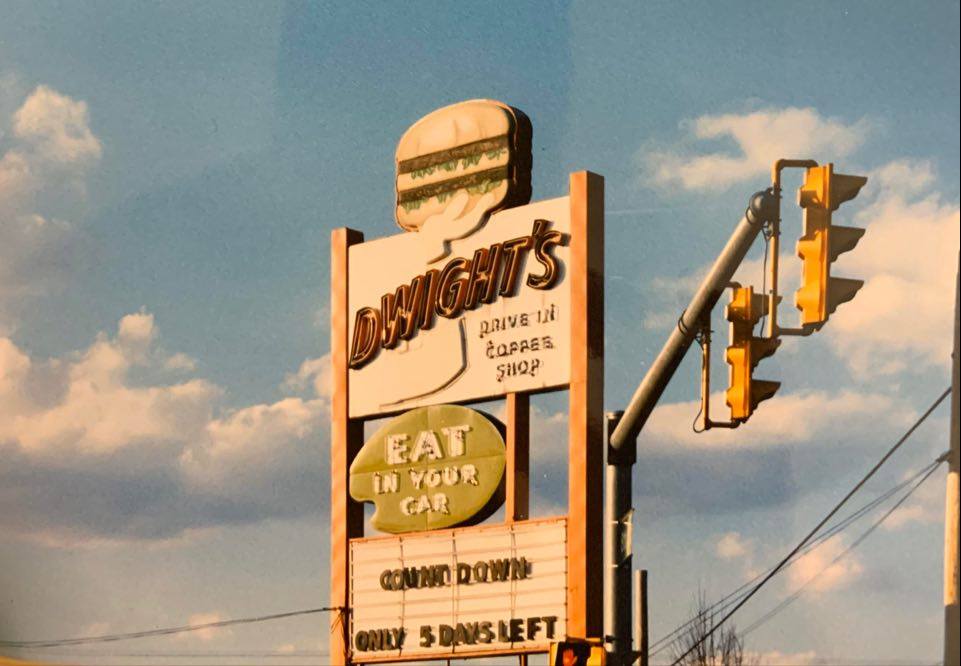 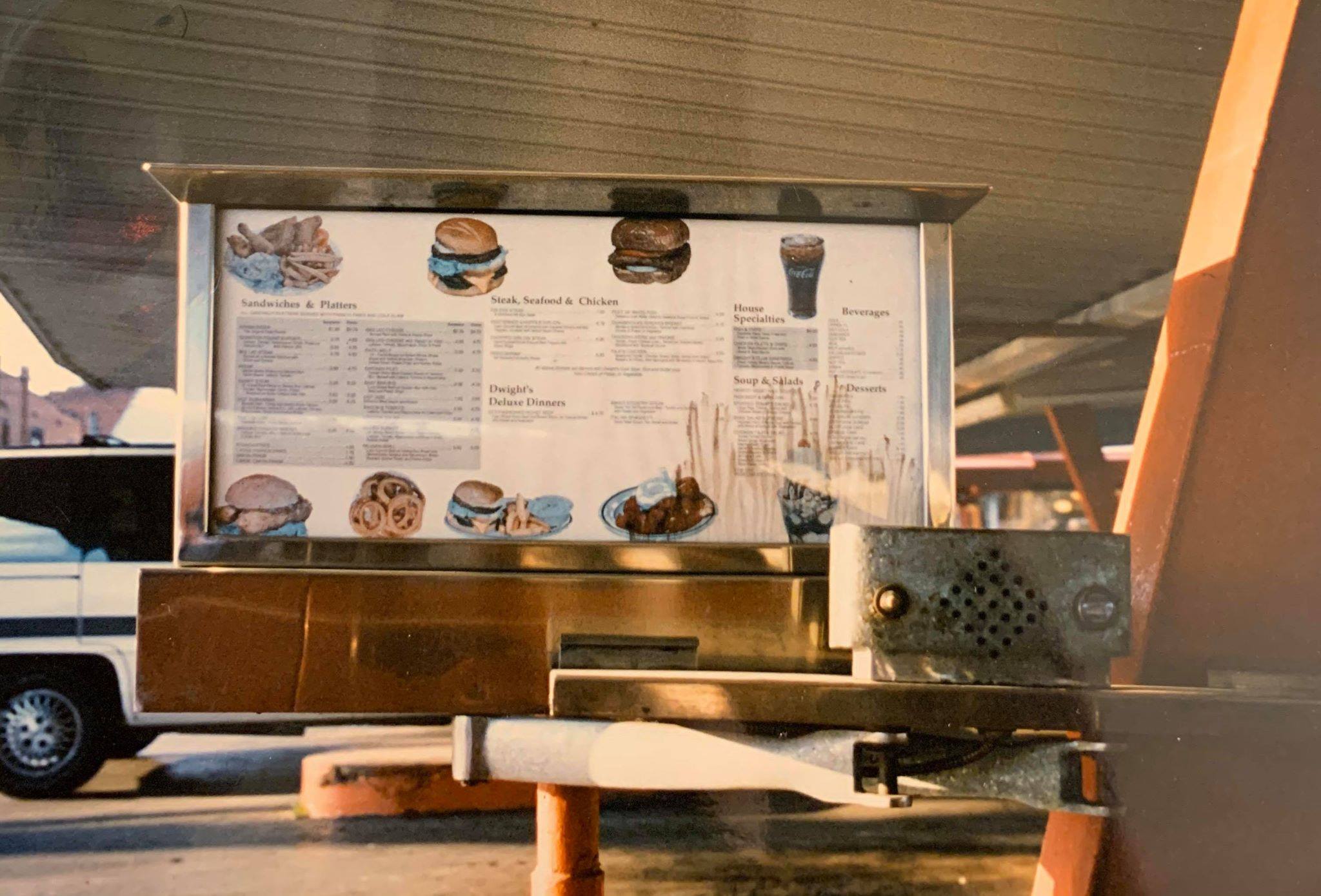 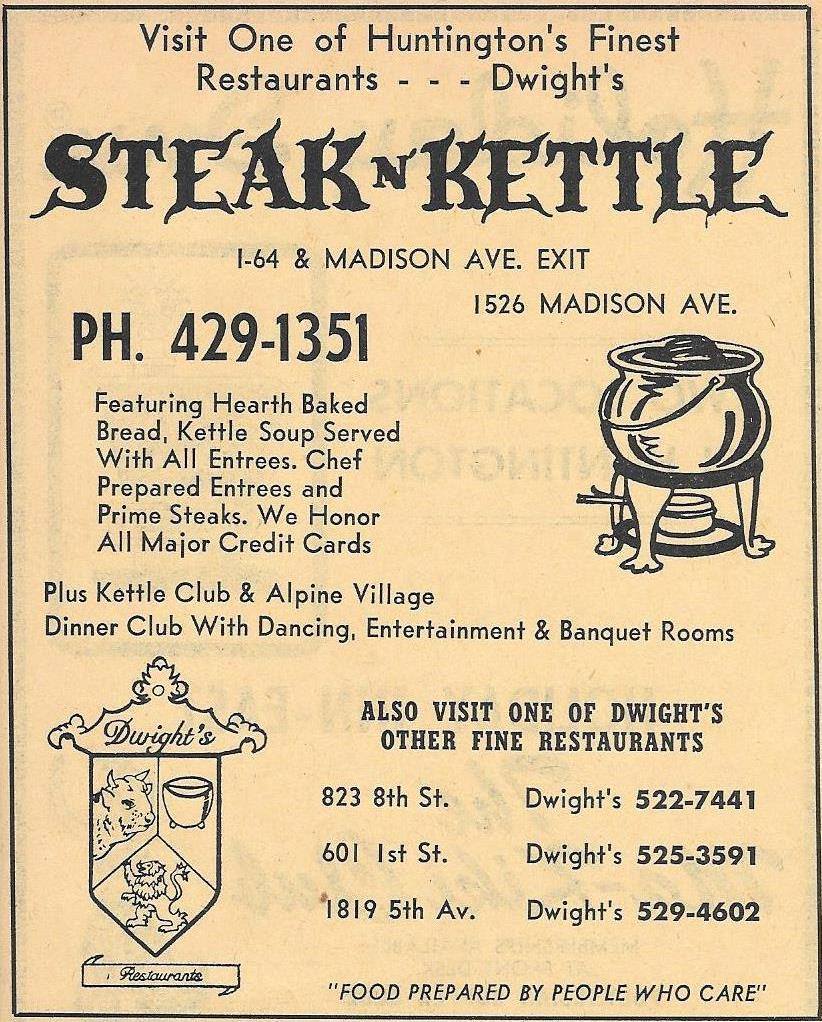 Some of Dwight's sandwiches 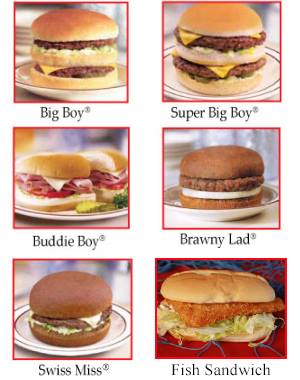 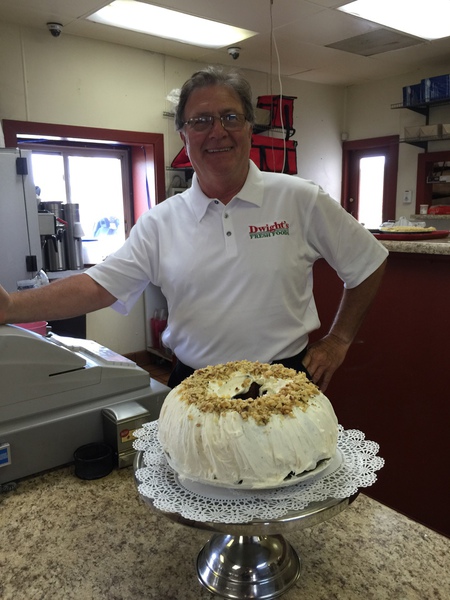 America's first drive-in restaurants opened in the 1920s and were a reflection of the proliferation of personal automobiles. As more American families took to the roads, the ways in which Americans could eat at restaurants changed from department store lunch counters and diners in depots to the option of drive-in service. The drive-in concept was pioneered in 1921 at the Pig Stand, a Texas chain where carhops served diners in cars in the parking lot. Drive-ins surged in popularity after World War II, and soon became an icon of the 1950s with their convenience and appeal to the country’s youth.

In 1950, West Virginia's Messinger family entered the restaurant business with Adkins Fat Boy Drive-In. This Huntington establishment was named after Dwight Messinger’s father Benny Adkins. Messinger, who was born in 1923 in West Hamlin, West Virginia, opened the restaurant after serving in the army during the Second World War. The drive-ins proved successful, and the Messinger family eventually operated four different locations in Huntington by the 1960s, along with two in Parkersburg and two in Chesapeake, Ohio.

Dwight Messinger opened the first Dwight’s Drive-In on the corner of Eighth Street and Ninth Avenue in 1963. The restaurant offered typical drive-in fare like burgers and fries, along with comforting steak or spaghetti dinners and hearty breakfasts that were available all day. Dwight’s was famous for its Kingburger, which featured two meat patties, and its Husky steak sandwich, a nine-inch beef steak on a fried bun, served alongside hand-breaded onion rings. Diners also enjoyed the Brawny Lad, a burger served on a rye bun with onions and tomatoes, as well as hoagies and fish sandwiches. For those with a sweet tooth, Dwight’s offered a popular strawberry pie among other desserts. The drive-in was also known for its coffee, which many Huntingtonians swore was the best in town.

Over the years, Dwight’s Drive-In became a neighborhood favorite. In 1971, a second location was opened at 601 First Street replacing a former Adkins Fat Boy Drive-In. While the original location was open late, Dwight’s of First Street was open twenty-four hours and became known for offering hearty food and coffee to many Huntingtonians at the end of a night out. Dwight’s was also popular among the city’s high schoolers. The Eighth Street Dwight’s had a basement dining room, called the Pony Room, where students were served, although many preferred the convenience of curb service. Dining in their cars gave students the opportunity to see and be seen by each other, as groups of youngsters could socialize in the parking lot before heading to another drive-in to repeat the process. While Dwight’s was a popular casual eatery, the Messinger family also owned another restaurant, the Steak n’ Kettle, between about 1971 and 1982. Located at 1526 Madison Avenue, the restaurant also featured a dinner club, called the Kettle Haus & Alpine Village, in its downstairs space.

Even as fast food restaurants with drive-thrus began to out-compete locally-owned places from the 1970s on, Dwight’s, with its late-night service and classic menu, remained in business. After over thirty years in business, the original Dwight’s closed in 1995. The site of the former drive-in is now the location of a WesBanco Bank. After the Dwight’s on Eighth Street closed, its customers were still able to visit the Dwight’s of First Street until it, too, closed in 2003 when the owners decided to shut it down rather than renovate it. The First Street location was demolished and remains an empty lot today. While both restaurants in Huntington have closed, there is a Dwight’s Restaurant in Saint Albans that opened in 1993. Mike and Vickie Messinger, the third generation of founder Dwight Messinger, carry on the family tradition with classics like Husky steak sandwiches, Kingburgers, and hand-breaded onion rings.

About Us, Dwight's Restaurant Saint Albans. Accessed May 19th 2020. http://www.dwights-restaurant-saint-albans.com/about-us/.