Established in 1915 by the Benavides family, Chope's Town Café and Bar is a local restaurant and cantina in La Mesa, New Mexico. For over a century, Chope's Town Café and Bar served as a community landmark because it was the center for social and political gatherings in La Mesa. In addition, the family-owned business and its history is connected with the Bracero Program, a worker program that allowed Mexican nationals to live and work in the U.S. due to the lack of agricultural workers during WWII. The Benavides family depended on the program for local produce utilized in their traditional Mexican cuisines, such as enchiladas and chile rellenos. In 2015, with the the help of two New Mexico State University students and their advisor, Chope's Town Café and Bar was listed on the National Register for Historic Places for its contributions and involvement with the La Mesa community and the Bracero Program. Today, the restaurant still continues to serve the people of La Mesa. 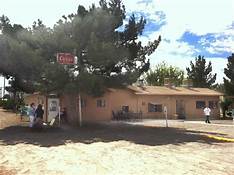 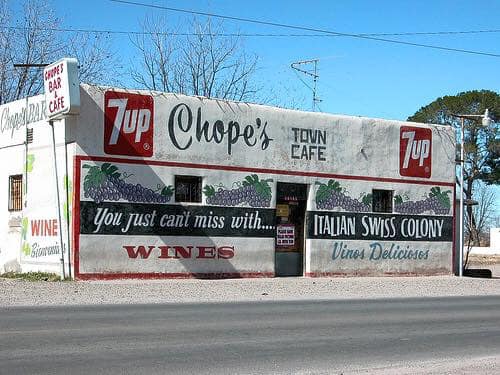 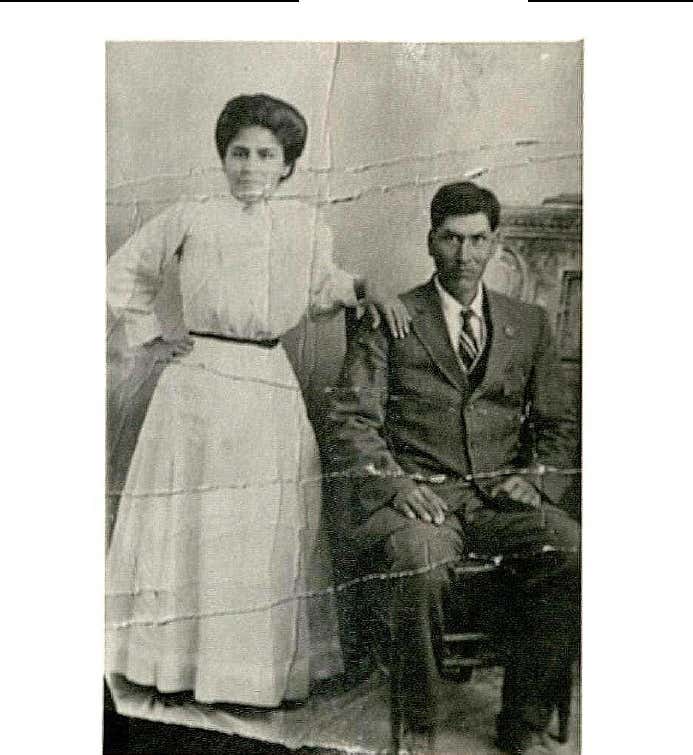 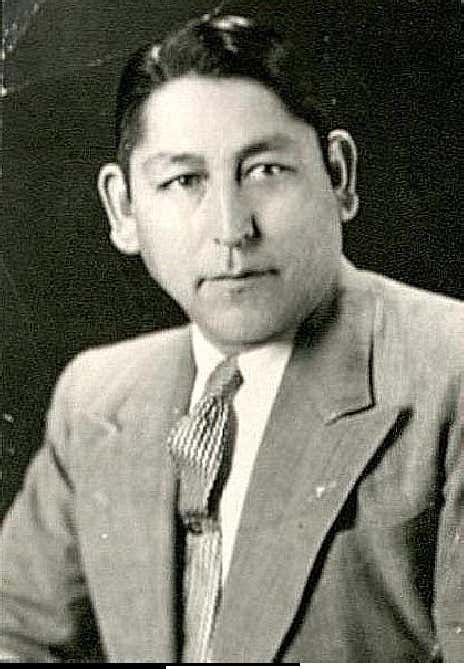 The Benavides Family: The Family Behind Chope's (1944) 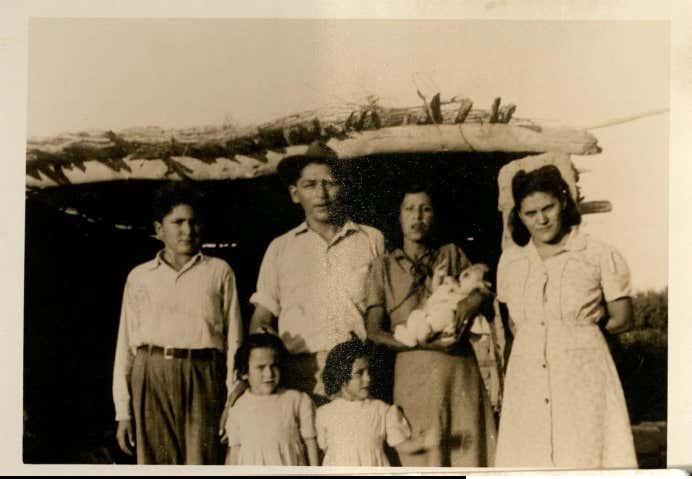 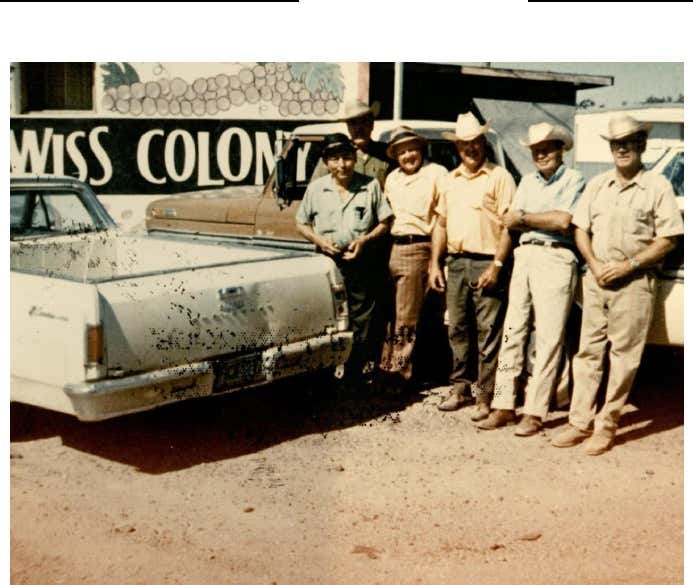 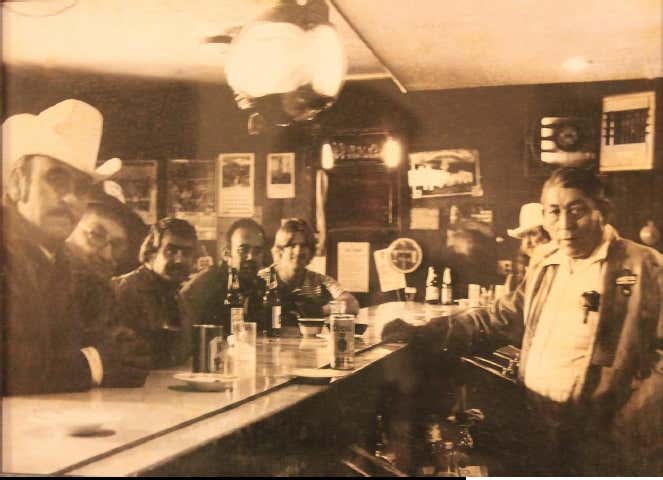 Originally, Chope's Town Café and Bar was built in 1880 and served as dwelling, and in 1892, the Benavides family purchased the property. Longina Benavides (1883-1940) converted the property into a restaurant and bar in 1915, selling enchiladas. Longina's enchilada recipe consisted of onions, chiles, cheese, and homemade tortillas covered in red chile sauce. During Prohibition, Longina would get alcohol from Juarez, Mexico and sold it at the restaurant. In 1934, the restaurant obtained a liquor license and sold alcohol in the bar and the Benavides' living room. The bar also included a jukebox and a slot machine for gambling. After several years, the restaurant's popularity skyrocketed.

Longina's son, Jose "Chope" (1915-1990) married to Guadalupe Rivera Benavides (1917-2016) in 1937, and soon, she became a significant asset to the restaurant. Guadalupe became a chef and manager when she was married in the family. Guadalupe brought her own style of Mexican-American recipes and expanded the menu by including dishes, such as tamales, gorditas, flautas, and chile rellenos. While Guadalupe handled the cooking, Jose "Chope" Benavides (He was called "Chope" after his father and the fact he wore "chopes," which is overalls in Spanish.) was the face of the restaurant. Chope would hold local social and political gatherings for the community in La Mesa. Chope would hold weekly coffee clubs meetings with farmers to discuss their crops, productions, and events pertaining to agriculture and business. In addition, Chope was a well-respected man of the La Mesa community, and he held many roles, such as a 1956 presidential election chairman, a "Guard" officer for the Council 1226 of Las Cruces, a member of the Lion's Club, and a member (along with Guadalupe and their daughters) of the San Jose Catholic Church.

The restaurant's new innovations was also heavily connected with the Bracero Program (In Spanish, "bracero" means "a man who works with his arms" or "manual laborer."). The program started in 1942 in response to the lack of agricultural workers and farmers during WWII. The program  temporarily allowed Mexican nationals to live and work in the United States in efforts to increase agricultural production. Chope's Town Café and Bar strived to serve authentic Mexican-American dishes with the freshest ingredients, so the restaurant depended on these braceros to produce cultivate and cultivate onions, chiles, beans, peppers, etc. Many braceros would often stop by the restaurant and eat a "lunch plate special" consisting of enchiladas, meat, rice, and beans. If the braceros do not have enough money to pay their meals, they would barter with Guadalupe and Chope with fresh produce. After the Bracero program ending in 1964, some of the braceros decided to stay behind and obtain residency in La Mesa; these braceros continued to be patrons of the restaurant.

Throughout the years, Chope's Town Café and Bar made several renovations to the property. In 1942, the Benavides family bought and renovated the neighboring welding shop, so they could separate the drinking establishment from the café where his young daughter would make the food. That establishment became the Chope's Town Café Bar. The bar is covered with painted advertisements between the 1950s-1960s for products the family sold in the restaurant and bar, such as Italian Swiss Colony Wine, Steel Brook Bourbon, and 7uP. Between the 1950s-1960s, Chope built a cinderblock one-bedroom and one-bathroom casita behind the bar for bartending staff and a shed adjacent to the bar for storage and a place for a large walk-in refrigerator.

In 2015, as a history project, Allison Warner and Norma Hartell, two New Mexico State University students and their professor, Beth O' Leary helped place Chope's Town Café and Bar on the National Register for Historic Places for its contributions to the La Mesa community and its deep rooted connections with the Bracero Program. Today, the restaurant continues to serve approximately 200 customers with recipes passed down from Longina and Guadalupe. Guadalupe and Chope's daughters still continue to manage and cook for the restaurant.

Jamar, Emily. The Converted House In New Mexico That’s Now A Quirky Restaurant In The Middle Of Nowhere, Only In Your State . June 21st 2019. Accessed May 18th 2020. https://www.onlyinyourstate.com/new-mexico/chopes-town-bar-cafe-la-mesa-nm/.