The Morrison Block also is known as M. O'Connor Grocery Wholesalers, or more recently as Peoples Outfitting Building. The Italianate Commercial structure was built in 1870. It is part of the Indianapolis Union Station - Wholesale District. The building was renovated and has become the Morrison Opera Center. The ground floor tenant, the Hard Rock Cafe, moved out of the building in 2019 after twenty years. The Morrison Block was listed in the National Register of Historic Places in 1979. The owner of the building since 1997, Bruce Bodner, has proposed building a 22-story addition, raising the structure to 26 stories. The proposed $60 million building would become a 220-room hotel plus 32 residences. The apartments are planned to be a mix of market rate and workforce-rate units. 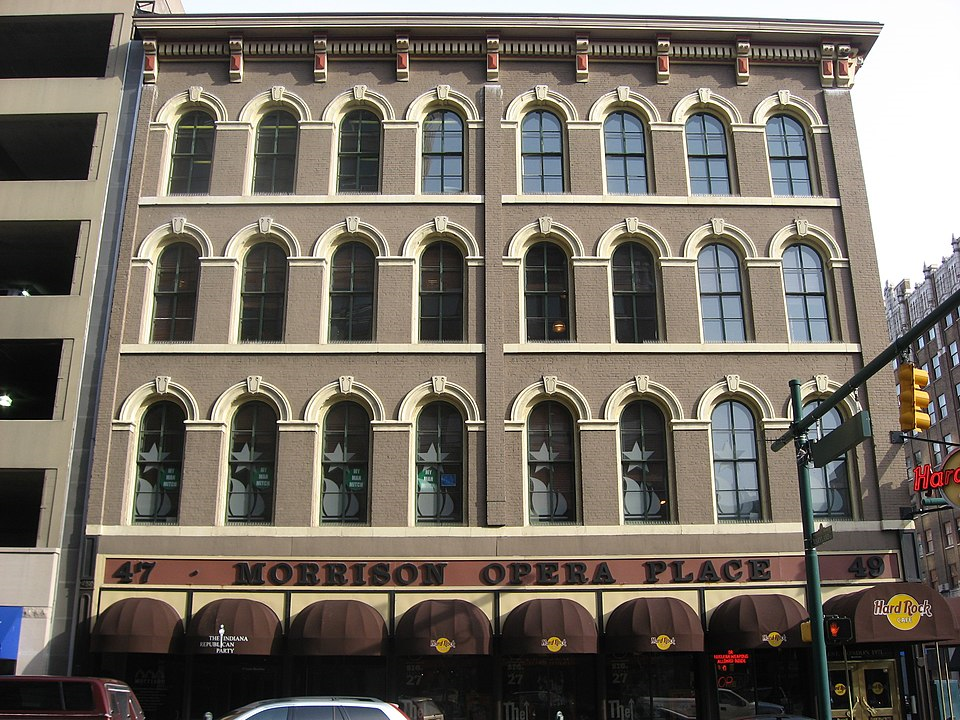 The Morrison Block was built by local businessman William H. Morrison on the corner of S. Meridian and Maryland Streets after the Morrison Opera Block was destroyed by fire early in 1870. Morrison was born in New York in 1806 and moved with his family to Indiana when he was 14 years old. William became a member of the Indiana Banking Company in 1870 and left to become president of the First National Bank of Indianapolis in 1878. Morrison died in 1881; his former mansion on Monument Circle became the home of The Columbia Club in 1889.

The building's second use was as the M. O'Connor Wholesale Grocers, a new owner, from 1886 to 1924. Michael O'Connor became the president of the Indiana Wholesale Grocers' Association in 1896. The firm outgrew the space and planned to move to a new location being built in 1924. The Peoples Outfitting Company obtained a 99-year lease on the building in 1923, moving there from elsewhere in town. The lease to the furniture company signaled a shift to retail businesses in the wholesale district. The Morrison Block was the location of the Colonial Furniture Company up to 1977. Much of the building has been vacant for the last several years, with the Hard Rock Café moving out of the ground floor in 2019.

The building features arched windows on the second through fourth floors with an Italianate style cornice at the roofline. The interior has exposed brick, exposed wood beams and trusses, and cast iron columns. The building's owner, Bruce Bodner, occupies office space within the Morrison Block, for his real estate development firm, Bruce A. Bodner Co. Kenzie Academy operates from the third floor of the building. The non-traditional school charges no tuition until the student finds a good-paying job in Software or UX (User Experience) Engineering. In-person and online coursework is offered for full-time students. The Speak Easy, a non-profit that brings member businesses and entrepreneurs together, was founded in Indianapolis in 2011 and moved into offices in the Morrison Block in 2016. The organization focuses on early-stage companies as well as companies in the growing and scaling stages. Co-working spaces, micro-leasing, and exposure to collaboration resources are some of the features.

The proposed 22-story addition to the Morrison Block was designed by a local firm, Ratio Architects. Plans call for the exterior of the existing four-story building to be retained with the loss of a small portion of the interior to create new support pillars. The revamped building would have the first floor of the opera house as a restaurant, the second story as the hotel lobby, the third floor for meeting space and back operations, and the fourth for additional commercial/ bar space. The hotel would occupy floors six to seventeen with apartments on the uppermost floors. The design calls for a very different look for the upper versus original stories, with the upper addition on "stilts" above most of the lower building, set back from the front of the historical structure's S. Meridian Street facade. There would be a gap of 27 feet between the roof of the older, over 43,000-square-foot original building and the base of the new addition.