Maple Grove (Palmer-Lewis Estate) was the childhood home of Francis Asbury Palmer. Palmer purchased the home from the other heirs of the family following the death of his father in 1858. He decided to use it as a summer home. The home may have been built before the Revolution and saw several renovations over the years. Palmer was a wealthy NYC banker, who began his career with operating as a stage line of horse-drawn omnibuses. Eventually, he became a successful banker founding the National Broadway Bank and the Broadway Savings Institution. Maple Grove remained in the possession of the family until the 1990s but most of the land was sold off over time. In 1993 the property was left to St. Matthew’s Church in Bedford, which was then sold it as a private residence. 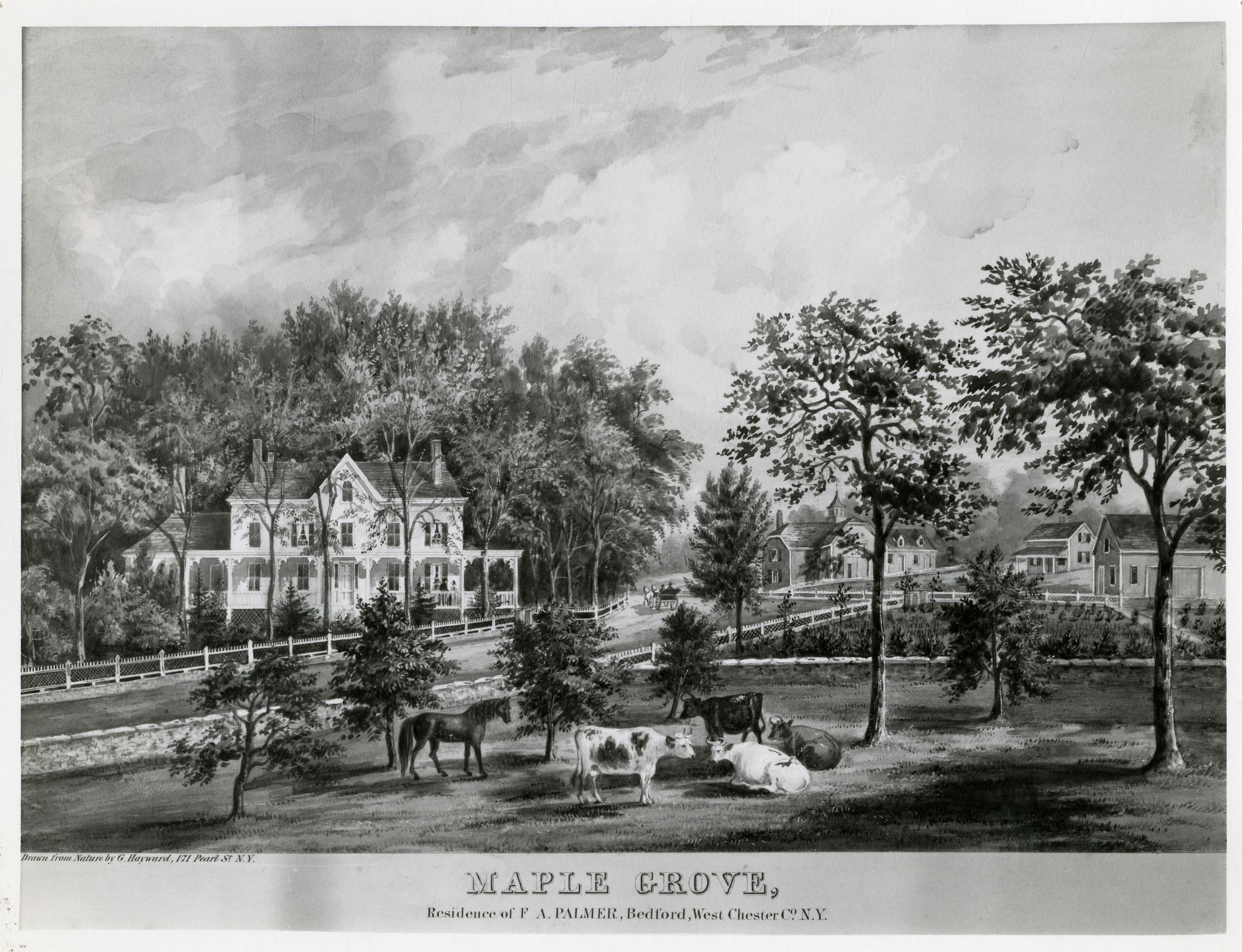 Francis Asbury Palmer was born in Bedford in 1812 and was educated at one of the Bedford common schools and Bedford Academy. He left Bedford at 18 years old and went to New York City. Initially worked as a grocery clerk and then as a stage driver. By 1842, he owned and operated a stagecoach service in Manhattan and eventually he was able to raise enough capital to establish another company. In 1849, Palmer established the National Broadway Bank and then the Broadand Savings Institution two years later. During this time he married Susannah Sheldon in 1844, though they had no children, they raised Francis’ niece and two nephews following the death of his brother Walter.

The Palmer-Lewis Estate was home to the Palmer family for many years. Francis Asbury Palmer was a wealthy New York City banker who had spent his childhood there. When he purchased the home, he decided that the home had to be repaired. It was enlarged early in the Federal period, transforming it into a center-hall house. Palmer altered the design of the house again when it changed to reflect a gentleman’s Romantic villa. Majority of the alterations to the home were designed in the Italianate style. The most noticeable addition to the home was the broad veranda with elaborately bracketed pillars, wrapped around three sides of the first floor. (Williams, 199)

Palmer was so satisfied with the completed renovations he had a water-colored portrait of the house and the land surrounding it done by New York City artist and illustrator George Hayward. The estate encompassed a vast amount of farm land with many barns and outbuildings that required it to be maintained. Since he desired for the farm to remain active, he ultimately gave the property to his niece, Matilda under the condition that her husband Dr. William H. Lewis would halt practicing dentistry to maintain it. It was able to produce at least limited production until after World War II.

The couple were avid philanthropists, donating to many religious and educational institutions. Probably their largest donation was the construction of a new Bedford Presbyterian church. In 1902 Francis Palmer died and then his wife died a year later. Matilda left the property to her son and his wife, Palmer H. Lewis and Phoebe Frost Lewis. Then the couple left the home to their daughter, Hope Lewis Bedell. Following the death of Mrs. Lewis in 1993, the property was left to St. Matthew’s Church in Bedford, which sold it as a private residence.