The Garfield Park Conservatory stands a few miles west of downtown Chicago in the neighborhood of East Garfield Park. Located within the East Garfield Park neighborhood is 184 acre Garfield Park, which is listed on the National Register of Historic Places. The conservatory is celebrated for its architecture and diverse horticulture in the National Register of Historic Places report (7), but the celebration of architecture and diverse horticulture is only half of the story of the conservatory. If the plants could speak, they would tell stories of persevering through countless engineering improvements, challenging weather, racial tensions, and war struggles, all while continuing to provide a bit of nature in the midst of the city. 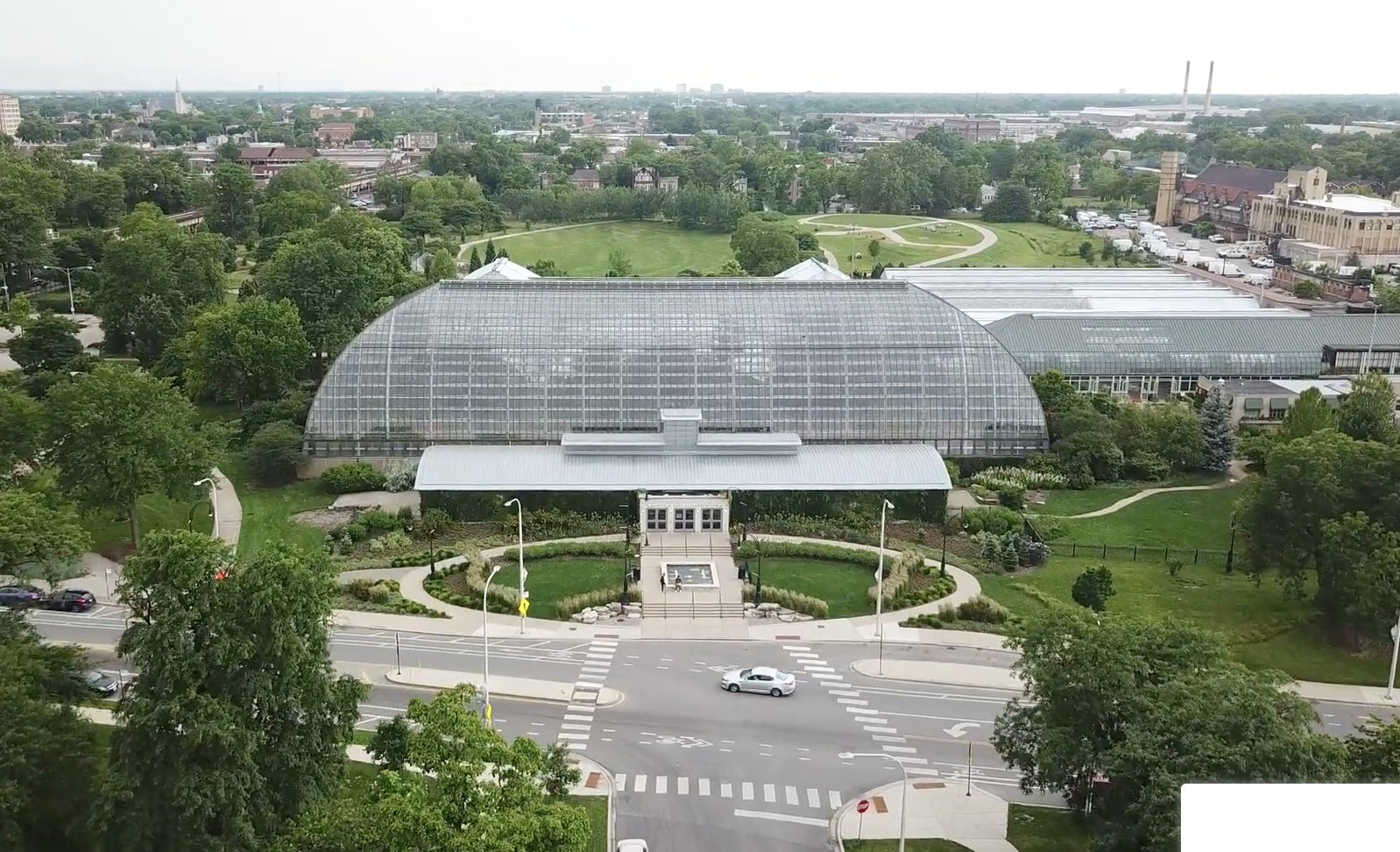 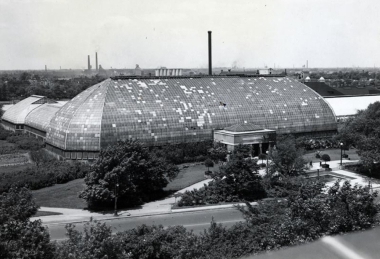 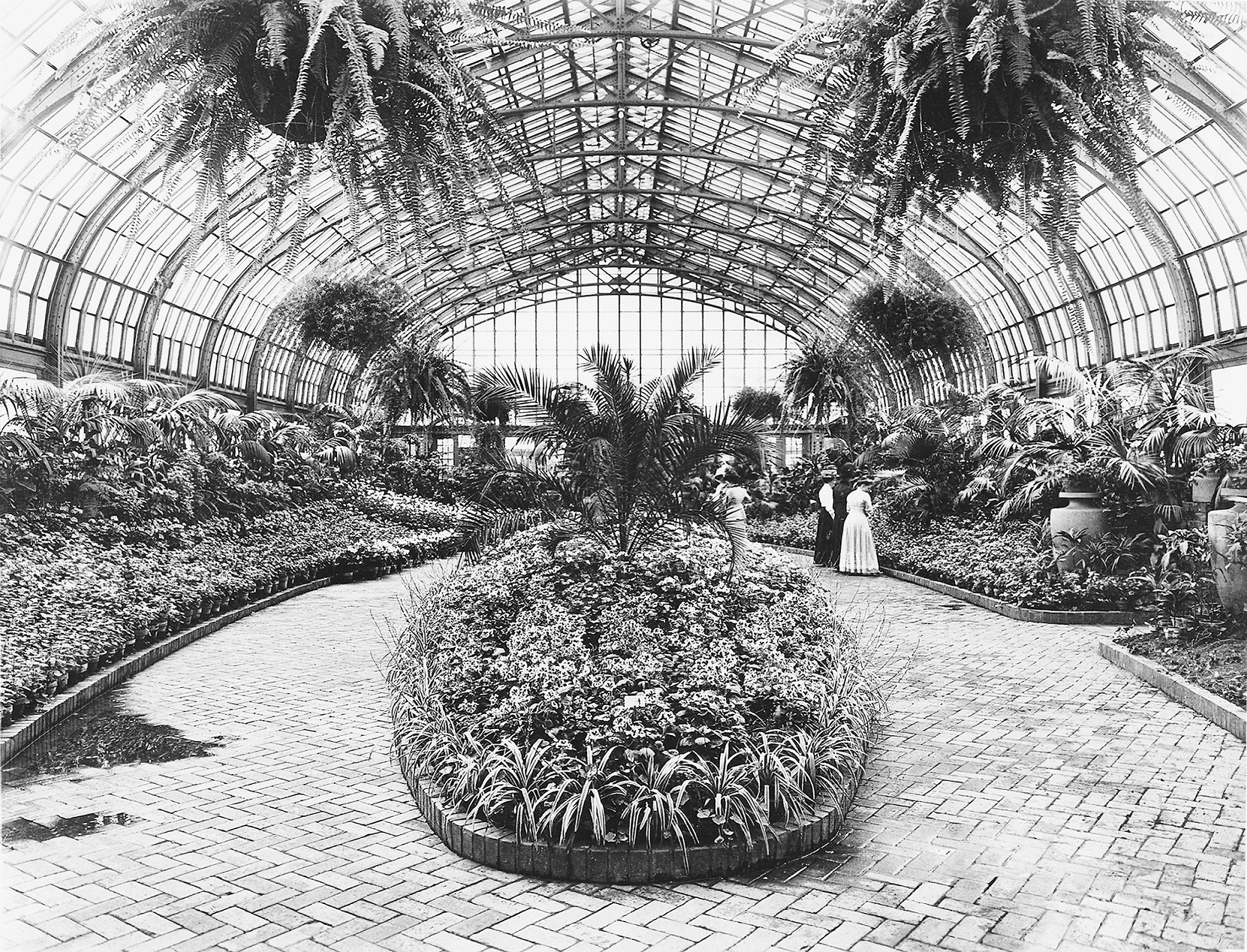 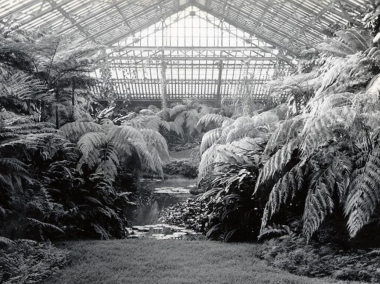 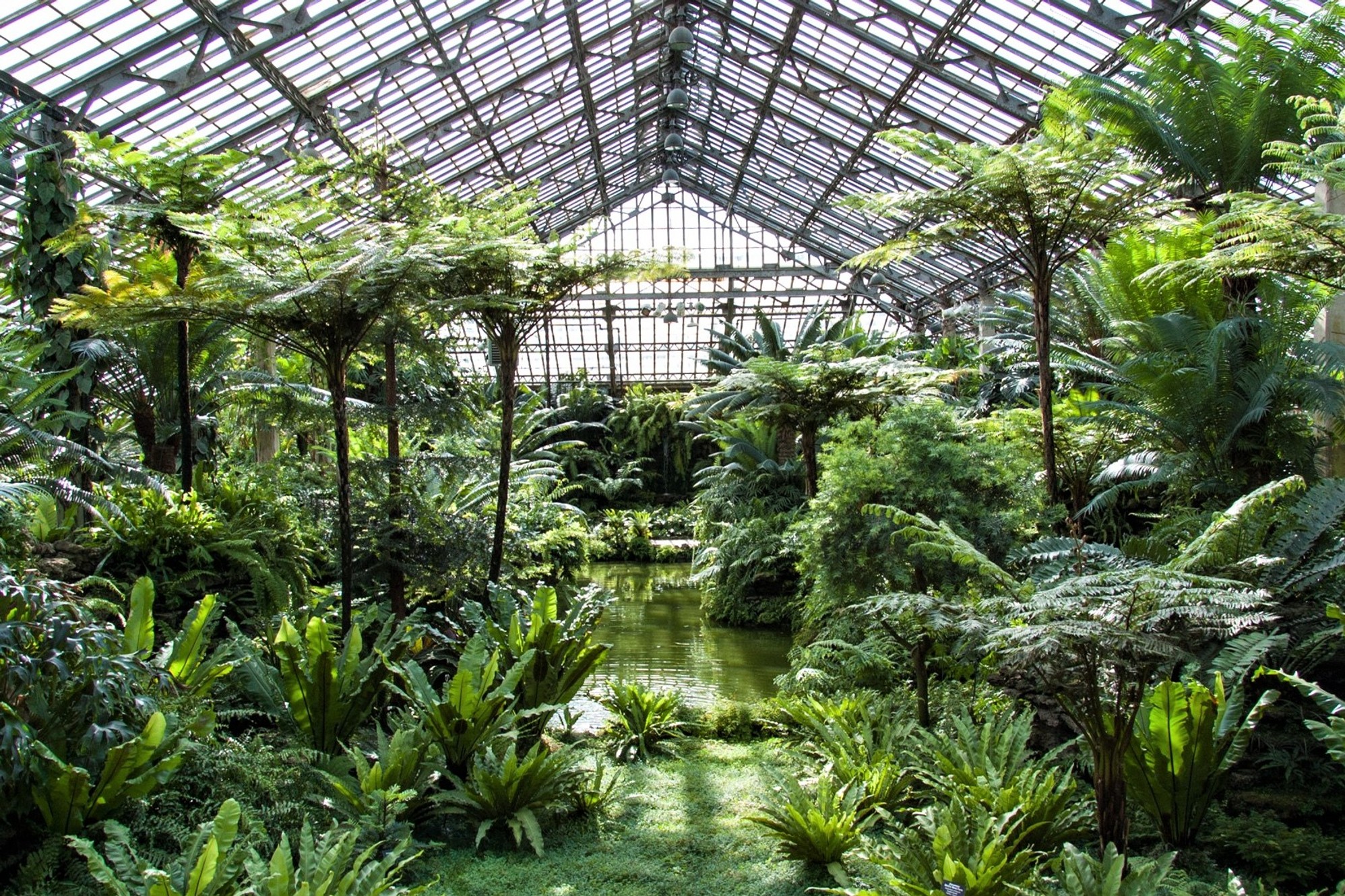 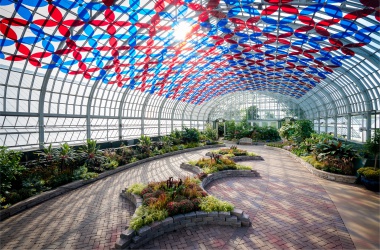 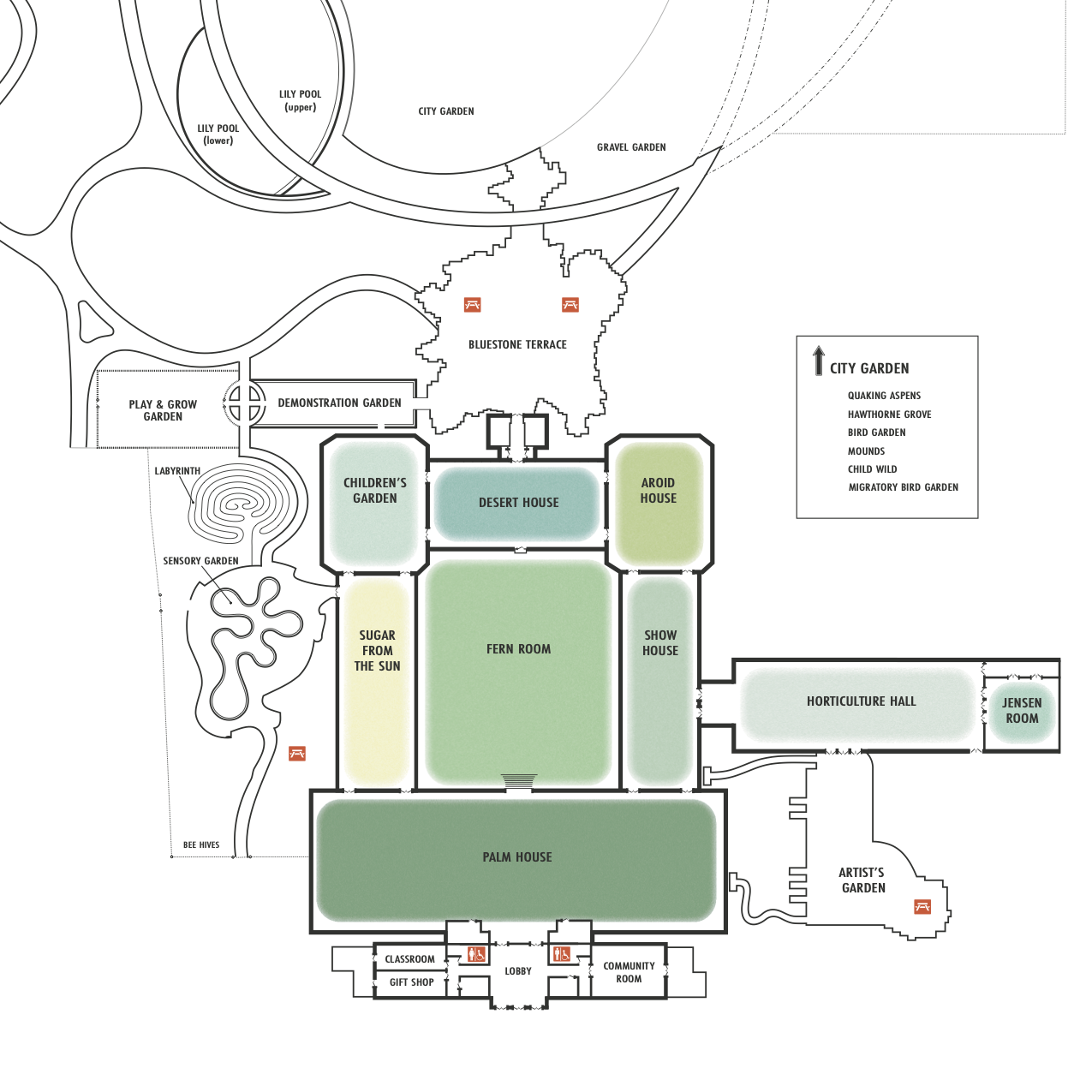 Original construction of the conservatory

The original Garfield Park Conservatory was one of four conservatories. It was built in the 1880s and made from wood, glass, and “braces and trusses of all sorts” (1). At the end of the 19th century, three Westside Chicago parks also had their own unique conservatory for residents and visitors to enjoy. From the 1880s to 1905 the three conservatories as well as the original Garfield Park Conservatory had fallen apart due to Chicago’s harsh weather and poor park management. (4).

In 1905, the Chicago West Park Commission’s general superintendent and chief landscape architect, Jens Jensen decided to take leadership over the neglected parks and planned to build one mega conservatory. Jens Jensen designed the new conservatory with Richard E. Schmidt, Garden & Martin Architecture partnership, and Hitchings & Company engineering firm. The team of well-known architects and engineers had a difficult task in creating a structure that was designed to look like the haystacks of the Midwest with a budget of $160,000. The floor plan covered 68,000 square feet of display space and 30,000 square feet for plant propagation, making it the largest conservatory in the world at the time (8). Plants were taken from the four previously existing west-side conservatories and used in the original plantings of the new Garfield Park Conservatory. The new conservatory hid pipes and other mechanical equipment under the soil of plants and in the walls of the stonework to create a natural display. In 1908 the seven rooms were completed and opened to the public (4). Unfortunately, only a year and a half after it opened, the conservatory started having the first of its many structural issues which still impact it today.

During World War 1, the conservatory opened a “school garden” to teach the community how to grow foods during the wartime shortages. After the war, conservatory staff started labeling all the plants in the conservatory and focused on education and working with local schools featuring rare and valuable plants (1).

By the end of the 1920s, the conservatory’s popularity had grown, with an attendance of over half a million each year. This response prompted the construction of the Horticulture Hall which was finished in 1928. During World War II women primarily ran the conservatory while men were at war. They planted Victory Gardens which offset food shortages as well as increased attendance of the conservatory. After the war there was a big push for community events as soldiers returned home. The conservatory launched a “Flower of the Month” program which broadcasted on local stations and in daily newspapers. Programs like this helped attract over a million visitors in 1950 (1).

Over the next few decades the high maintenance attraction began to deteriorate. The conservatory became a “leaky-roof fairyland” (1).  The conservatory received little funding to improve the structure due to the socioeconomic changes impacting the neighborhood. During the 1950s the government worked with banks and real estate agents to practice forms of “redlining” and “blockbusting” (9). The neighborhood of East Garfield Park was a victim of these racist practices (3), (5). Due to the unequal services offered to certain racially concentrated neighborhoods, East Garfield Park became a changed neighborhood.

As the neighborhood underwent many changes so did the conservatory. To try to improve the situation the Chicago Park District decided to replace the glass shell for a fiberglass one in the Palm House, in hopes of an increase in attendance. Unfortunately, matters got worse and the number of visitors decreased, with the few staff left fighting over and stealing plants (1). During the early 1960s, West Garfield Park was increasingly denounced as poor. Author Linda Gartz, the author of Redlined: A Memoir of Race, Change, and Fractured Community in the 1960s Chicago, a book that writes about her family raising her in West Garfield Park and the discrimination that occurred in her neighborhood, shares her own memory of the conservatory. “In the early days of the park, before air conditioning, people used to bring blankets to the park to lie and sleep in the cool breezes that blew across the lagoon. By the early ‘60s, no one would think to do such a thing. Dangerous. Conflicts between Blacks and Whites arose.”

Throughout the 1970s and 1980s the Garfield Park Conservatory’s support and funding continued to decline due to political issues and unstable leadership. In 1989, rumors spread that the conservatory was planning to close down. Many staff had been laid off. The cold snap of 1994 led remaining staff to bring in heaters from Soldier Field and wrap the plants in plastic sheeting in order to save the remains of the conservatory (1). Unfortunately, plants still died and things were not looking good for the conservatory. Hope came from Mayor Richard M. Daley, Chicago Park District’s preservation architect John Eifler, and the nonprofit “The Friends of the Parks” who created a restoration plan. The plan committed several million dollars of Park District funds to increase attendance and bring back the horticulture. In addition, the Garfield Park Conservatory Alliance was founded in 1995 and raised an additional $8 million dollars for physical improvements. After improvements were finished in 1995, the conservatory was on its way to thriving like it had in the 1920s.

Garfield Park Conservatory Alliance now raises money for the upkeep of the plants and structure, educational classes, and to connect the town of East Garfield Park to their conservatory (2). In 2011, the conservatory again was a victim of the harsh weather when a hailstorm damaged the delicate glass panes that make up the majority of the structure. Shards were spread out throughout the site and many plants were damaged. Extensive repairs were finished by 2015 (6).

Despite the challenges of weather, war, and economic changes, Garfield Park Conservatory and the surrounding neighborhood have faced, the conservatory is still open today for visitors to explore 9 unique rooms over the two acres of public greenhouse space as well as the 10 acres of outdoor gardens. Admission to Garfield Park Conservatory is free and it is open 365 days a year, attracting a diverse group of people (8). If you are looking for a rest from the grit of the city, explore one of Chicago’s hidden gems that has preserved over 100 years of change.

Inspired by Nature: The Garfield Park Conservatory and Chicago's West Side Book

Inspired by Nature: The Garfield Park Conservatory and Chicago's West Side Book