The Warren Lasch Conservation Center in North Charleston, South Carolina preserves one of America’s greatest mysteries: the ill-fated H.L. Hunley. The Hunley was the first successful submarine in the world, surprisingly, it was built and used by Confederate forces in 1864. It went missing for 131 years after its third departure before author Clive Cussler and crew, during a 14-year journey, discovered the wreckage of the Hunley in Charleston Harbor in 1995. It was then excavated in August of 2000 and the 38-foot submarine has since been preserved in a fresh water tank while scientists study its mystery. Tours are available only on weekends and are $12 at the gate with discounts for seniors.

A drawing of the sloop-of-war Housatonic that Hunley sank in the dead of night in 1864.

An artist's idea of how the spar torpedo on the Hunley looked. 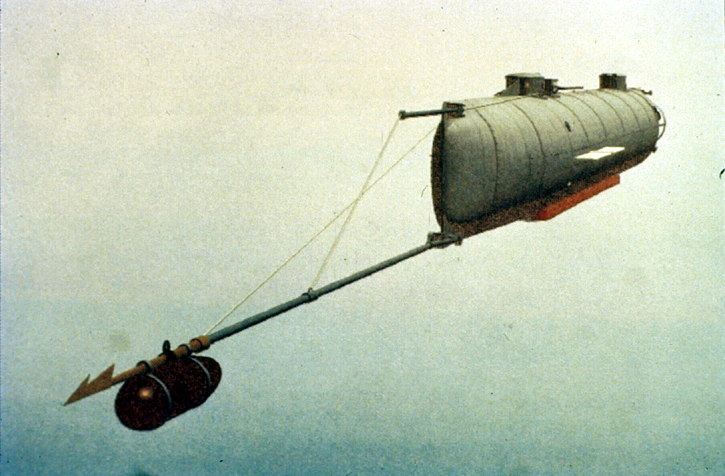 The H.L. Hunley was not the world’s first submarine, but it was the world’s first effective submarine. It was the first to successfully sink a ship, a Union sloop-of-war. It was a feat that would not be repeated again for half a century during World War I.

The Hunley was built by Park and Lyons of Mobile, Alabama. Though recent inspection is changing the assumed beliefs of the history of the submarine (much of it was top secret) some ideas remain about its construction. It was fashioned from a cylindrical iron steam boiler and shaped into a stream-lined machine. It was around 38-feet long and held a crew of nine men. Eight of the men were to hand crank the propeller and one man to steer and direct the sub. There were two simple ballasts on either end of the sub that could be flooded with valves to sink or they could be hand pumped dry to surface the vessel.

On February 17, 1864, after two trial runs had killed its crew, the Hunley launched a sneak attack on the USS Housatonic in Charleston Harbor off the coast of South Carolina.  The Hunley departed late at night and approached the Housatonic with a lance-like, hollow 17-foot pole with a torpedo attached at its end. The Hunley rammed the warship with the lance and barbs attached to the torpedo anchored it to the Housatonic’s hull. The submarine then reversed, and when it reached a safe distance the crew pulled a rope to detonate the torpedo. The explosion caused the ship to catch fire and sink. Later, the Hunley crew surfaced and signaled shore with a magnesium lamp that the mission was a success. Confederate leaders waited on the shore for the return of the submarine which never appeared. Scientists at the Warren Lasch Conservation Center are still working on the mystery of why the submarine sank and killed its third and final crew.