While this property may not seem like much today, it was the site of a momentous and highly consequential decision during the Civil War. Originally known as Dillon's Plantation, it served as the headquarters of Union Generals Ulysses S. Grant and William T. Sherman in early May of 1863 during their campaign to seize control of the key strategic city of Vicksburg. On May 12, Union and Confederate forces were fighting in the Battle of Raymond, just a few miles to the east. Upon hearing of the Union victory over elements of the Confederate Army of the Mississippi, which was led by General John C. Pemberton, Grant changed his original plans and ordered troops to march on the capital city of Jackson the next day. This decision marked the turning point in the Vicksburg Campaign. The subsequent battles in the coming days were Union victories and Grant was able to begin what would become known as the Siege of Vicksburg (May 18-July 4). The Union captured the city on July 4, giving them full control of the Mississippi River and cutting the Confederacy in two.

This historical marker is situated along the road next to site of Dillon's Plantation, where General Grant made the decision to attack Jackson. The Union victory isolated Vicksburg and led to its eventual capture. 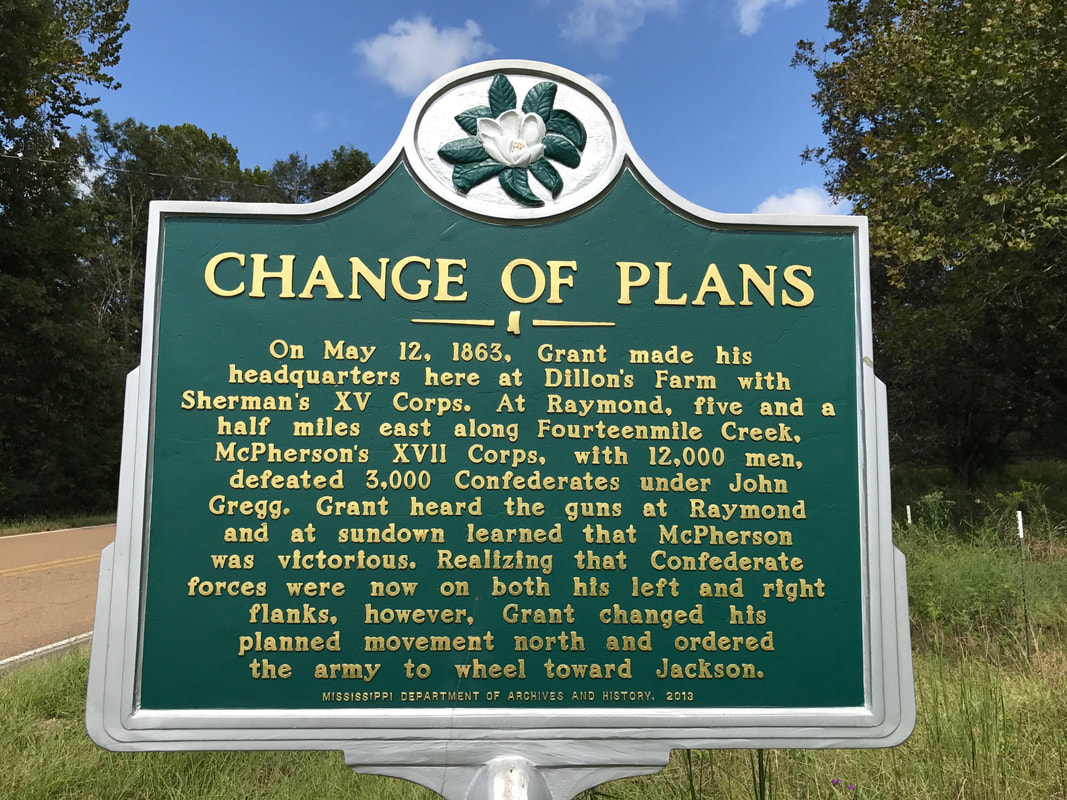 The Vicksburg Campaign began in late December 1862. As noted above, capturing Vicksburg was an important goal for the Union. It was the last major Confederate stronghold on the Mississippi River and seizing it would give the Union the ability to conduct trade in the Gulf of Mexico and transport troops and supplies more easily.

From late December 1862 to March 1863, all of Grant's attempts at taking Vicksburg failed. He planned a two-pronged attack where his forces would approach the city from the north through the Mississippi Delta marshes and from the west. Due to a number of factors, this plan, which included a series of maneuvers and building two canals just to the west of the city, ultimately failed.

Grant was undeterred, however, resuming the effort to take Vicksburg in late March. He sent troops down the west side of the river and ordered a flotilla of naval vessels carrying supplies south past the city to where the army planned to cross the Mississippi. In late April, Union and Confederate forces began a series of battles that tightened the Union's grip on the city. These included the aforementioned Battle of Raymond and the Battle of Jackson. The Union attack on Jackson was a total surprise to the Confederates, who were severely outnumbered. The city was not only the state's capital, it was where the railroads connecting to Vicksburg were located. Capturing the city prevented Confederate reinforcements and supplies from reaching Vicksburg. The Confederates were defeated again at the Battle of Champion's Hill (northwest of Raymond) on the 14th and the Union continued its push towards Vicksburg.

In recent times, Dillon's Plantation was known as Bailey's Farm. In 2003, it was acquired by the National Park Service and became part of the Natchez Trace Trail. A historical marker is located along the road next to the property. None of the original Dillon Plantation buildings remain but there are several modern structures still standing, including the Bailey Farmhouse. As of early 2021, it is unclear whether any significant improvements to the site have been made.