Among the many other things produced in Newark and Licking County, golf clubs were a big business. Originating from a factory originally manufacturing buggy whips, Newark's golf industry flourished for almost a century. For over 90 years, golf clubs were continuously produced in a small factory on Essex Street in Newark. While Licking County does still have a presence in the golf industry thanks to The GolfWorks, the region was once a major center of the golf club industry.

A golf club scale designed by Ralph Maltby of The GolfWorks, golf club's made by Dynacraft in their Pal Joey line, three blocks of persimmon showing the progress of making a golf club head, and other items supplied by GolfWorks. 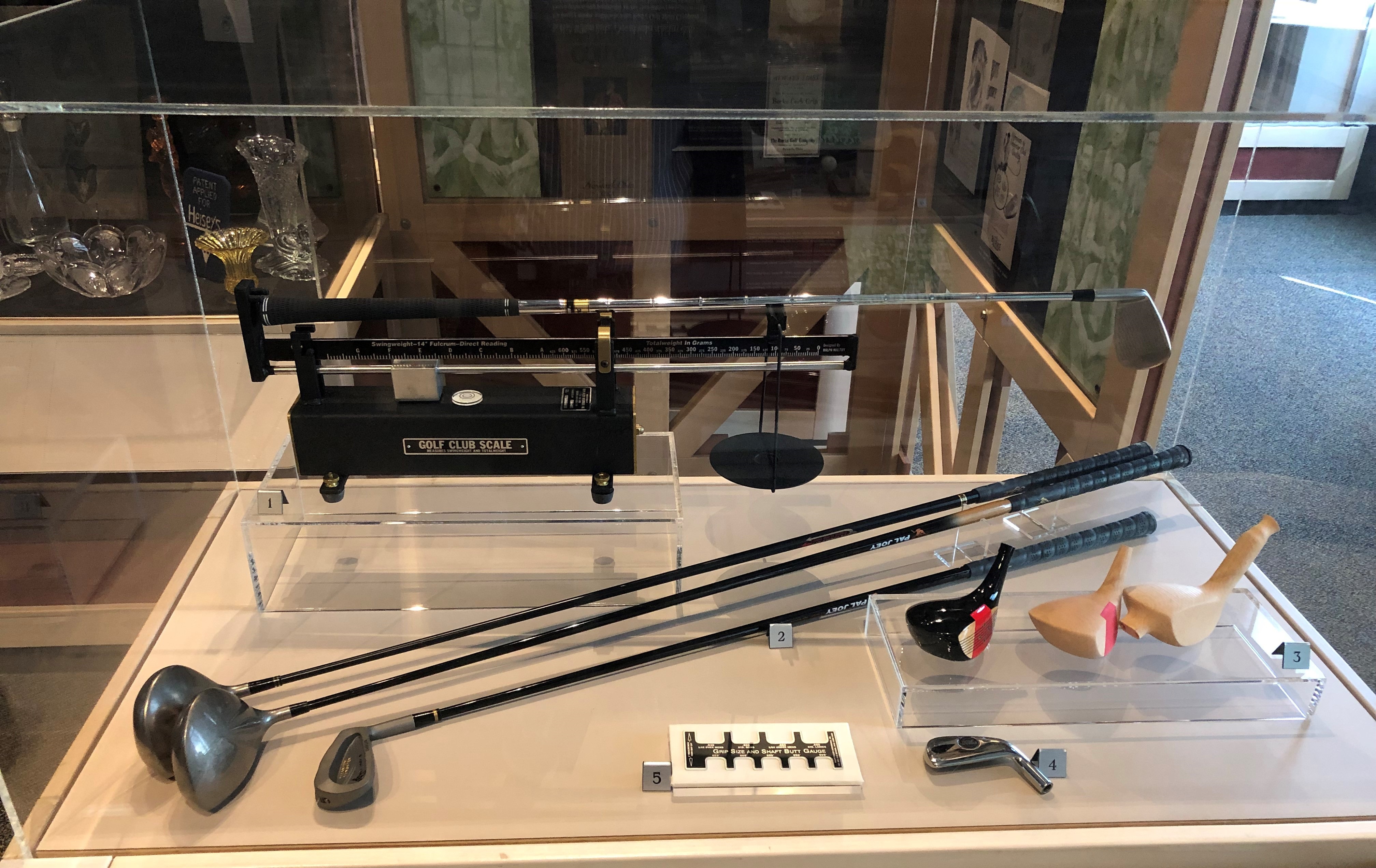 A variety of objects from the Burke Golf Company, including clubs, balls, stamps, and golf club gauges to ensure proper size. 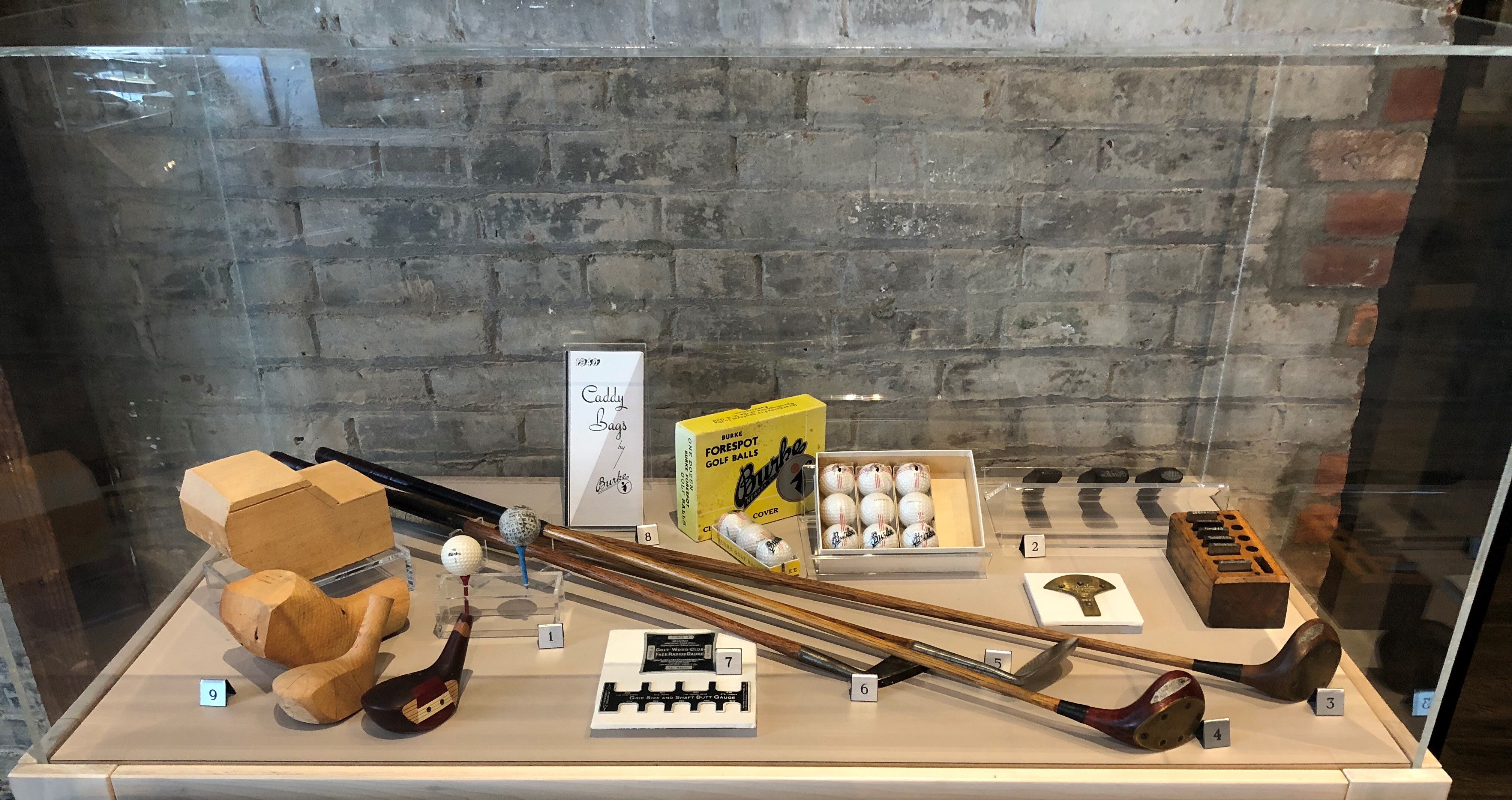 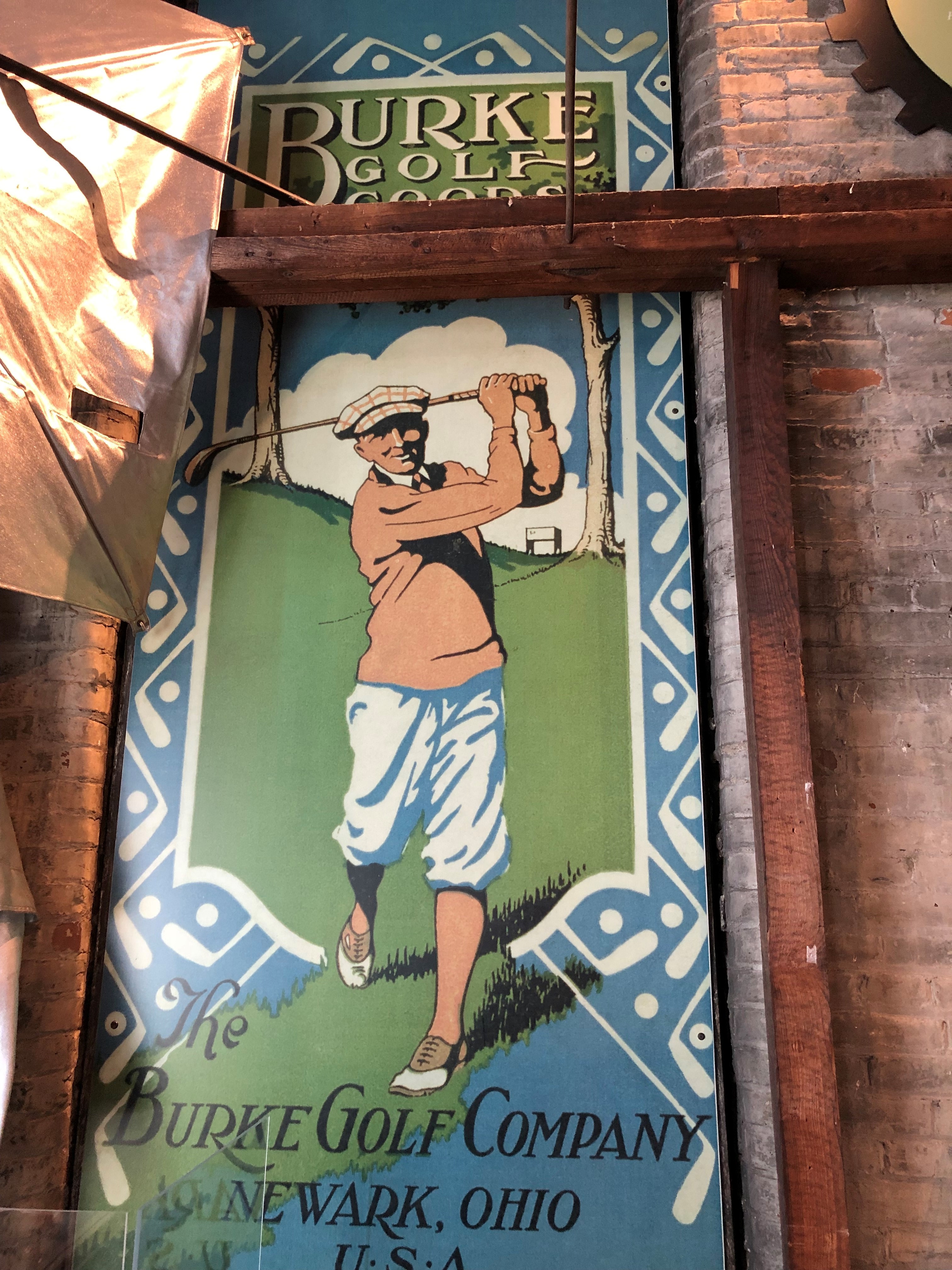 In 1910, William Burke, a Newark maker of hickory shafts for buggy whips, established the Burke Golf Shaft Company. Fearing the rising popularity of the "horseless carriage" would end his business, Burke began making hickory golf shafts. He sold them to English and Scottish club makers.

Three years later, Burke patented a new endgrain wood head. His innovation, which placed the grain of the entire body of the head at right angles to the striking face, increased by 30 to 50 yards the distance which a player could hit a golf ball. He immediately sold the rights to the Goften Manufacturing Company of Newark. By 1915, the Burke Golf Company produced its own line of golf clubs.

In the early 1920's, William Burke built a new factory at the corner of Brice and Liberty streets, complete with the most modern machinery. Its 150 workers could turn out 5,000 clubs per day. Soon after the factory's completion, Burke lost control of his company to Robert Crandall of Newark. The Crandall family ran the business for more than two decades. They relocated the plant at 160 Essex Street.

Newark was also home to other golf club manufacturers. In May 1970, Abbott Labs purchased the former Burke Golf Company plant in Newark. Between their Faultless Golf Division and Faultless Sports, they operated the plant until 1976, when ATO/Rawlings purchased the company. The new owners immediately moved the operation to Hebron.

In 1976, Jim Shea, the former president of Faultless Sports, began a new company based on the concept of custom club fitting and manufacture. He established the Bob Toski corporation. After securing the former Burke plant and hiring former Faultless and Burke clubmakers, Shea, in 1977, began production of the Bob Toski line of custom-made golf clubs. The Toski Company was sold in 1996.

Newark's GolfWorks and Dynacraft Golf Products, Inc. also manufactured golf clubs. Like Toski, these companies were spin-offs of the former Burke Golf Company. Ralph Maltby, the founder of The GolfWorks, served as vice president of Rawlings Golf. Joseph Altomonte, the originator of Dynacraft, was Shea's vice president at Faultless Sports.