From Fruit Jars to Fiberglass

Today, Owens-Corning is still a large employer in Newark and its name has become synonymous with the production of Fiberglas. But did you know that the site of its factory extends much further into the past and was once the site of the world's largest bottle manufacturer? Although it has changed quite a bit, glass production is still important to the economy of Newark and has continued in that location for over a hundred years. 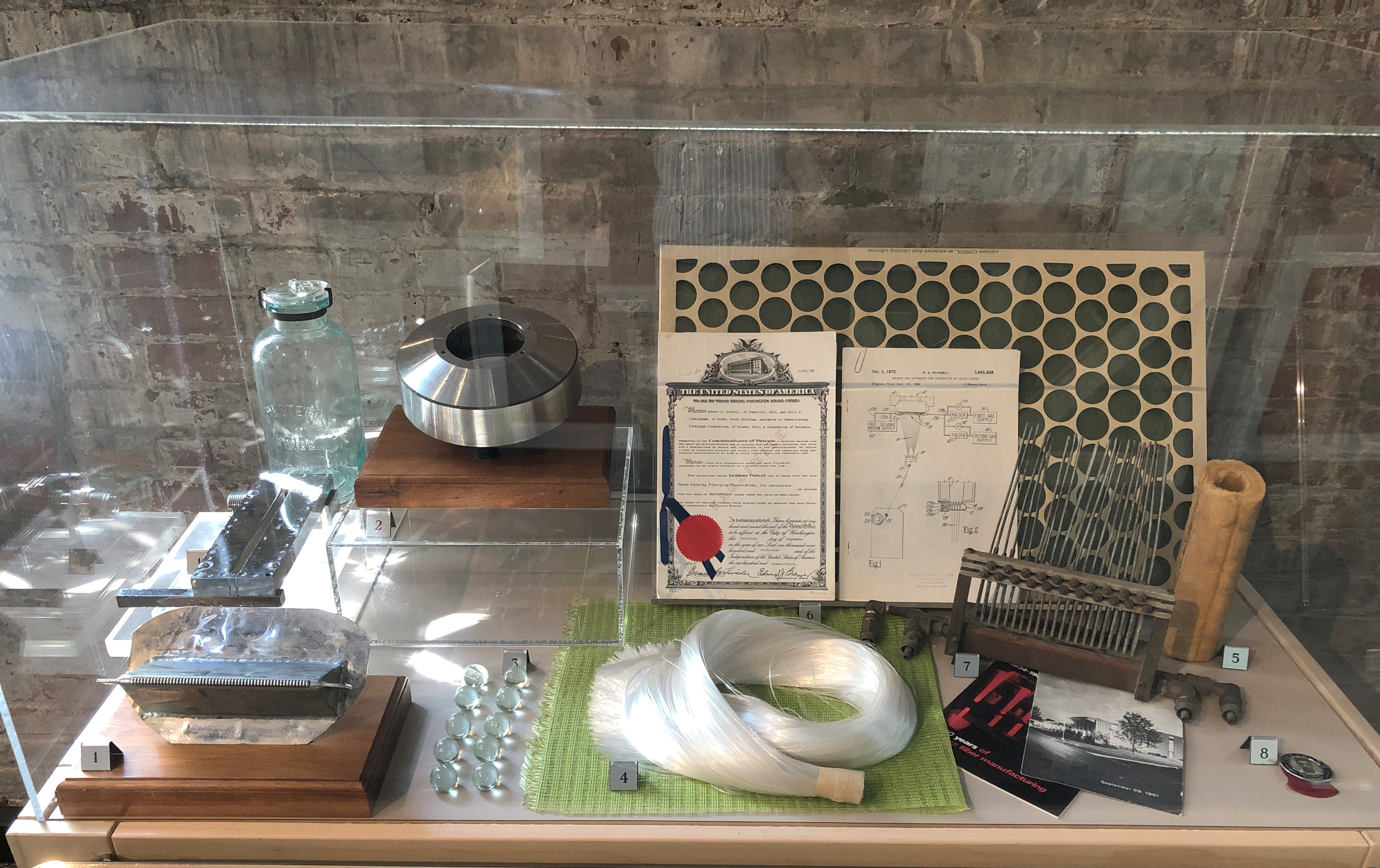 The American Bottle Company office and one of the factory buildings in the background. This was located at the current site of Owens-Corning. 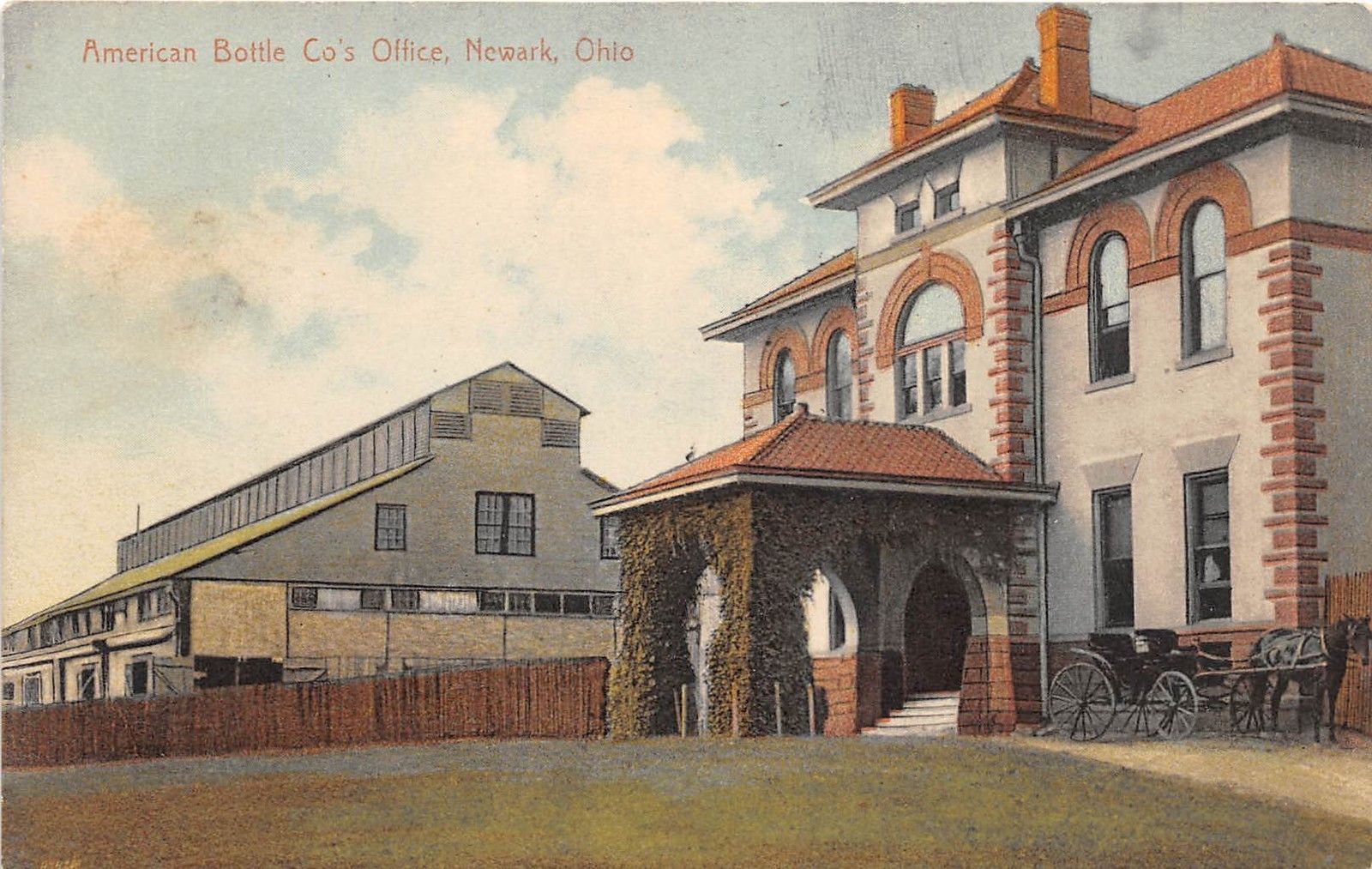 As early as 1871, extensive deposits of an excellent quality silica rock were discovered in Licking County. This material was the main ingredient used to make glass. In 1873, a group of Newark men led by William Shields, D.E Stevens, and O.G. King produced the first glass of the Newark Star Glass Works. They built a factory complex adjacent to the Baltimore and Ohio Railroad tracks on the southeast side of town. By the following year, Shields, King and Company employed nearly 100 workers.

In 1875, David E. Stevens and glass bower Richard F. Lumley, who worked at the factor, patented a "Glass Cap Self Sealer" which they named "Western Pride." Orders for the new product and other bottles poured in. A bankruptcy in 1878 and a strike in 1879 over wage cuts led to a prolonged shutdown. In 1880, Edward Hamlin Everett purchased the glass factory.

By 1885, Everett changed the company's name to E.H. Everett Company. Operating six furnaces, he produced fruit jars and bottles for beer, soda, and medicine. The following year, Everett struck it rich with a gas well on the eastern edge of Newark which he used for fuel at his plant.

In 1890, Everett applied to the recently formed Board of Trade for financial aid to build a more modern factory. Although the funds were granted, a legal challenge thwarted the effort. By the turn of the century, the company's 865 workers produced 30 to 40 tons of glass bottles daily.

In 1904 and 1905, Everett incorporated the firm as the Ohio Bottle Company and purchased glass plants in Massillon, Wooster, Illinois, and Missouri. Everett also purchased a license to manufacture bottles in a newly invented machine that would revolutionize the industry. In 1905, Everett founded the American Bottle Company, a $10 million corporation with 1,700 employees producing 300 million bottles a year. Twelve years later, the Owens Bottle Machine Company purchased Everett's business.

Prohibition practically destroyed the market for glass bottles. The firm limped along for a few years and was idle between 1929 and 1934. E.H. Everett died in 1929 at the age of 77.

In 1934, in a drive to perfect the production of fiberglass insulation and produce it in large quantities, the Industrial Materials Division of Owens-Illinois was born. By 1938, the Owens Company sold one half of its interest to Corning Glass and became the Owens-Corning Fiberglas Corporation.