The current skyscraper located here and known as the Odd Fellow Building was completed in 1908 and replaced Odd Fellows Hall which was demolished the previous year. Some called the former building a cross between the Taj Mahal and a Gothic chapel. The structure cost about $45,000 to construct in the 1850s while the land was acquired by the Odd Fellows at a cost of $17,000. The building was planned by Francis Costigan and completed with a dome by D.A. Bohlen. The structure served as the Grand Lodge (state headquarters) of the Independent Order of Odd Fellows, with office and commercial spaces on the first two floors. 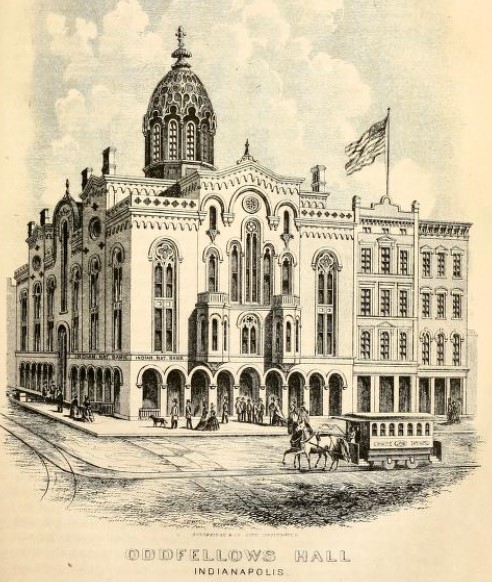 From the mid-1850s to 1907, an old Odd Fellows Hall stood on the northeast corner of the intersection of N. Pennsylvania and Washington Streets. A bank and other businesses leased the building's ground floor. Offices occupied the second story. The third floor was the Odd Fellows Lodge. The society began in England by the 1700s and spread to America in the early 19th century. The society is thought to have been started by workingmen as a social group and to support one another in times of hardship, since insurance was beyond the means of many.

A sketch of the Odd Fellows Hall from a book published in 1870 (Halloway p. 98.5, see image above) placed the Indiana National Bank on the ground floor of the building. Indianapolis became the location of the Grand Lodge of Indiana in the mid-1840s; it had previously been in Madison, and before that, in New Albany in the 1830s. When the Grand Lodge of Indiana moved to Indianapolis, it was comprised of twenty-seven subordinate (local) lodges with over 750 members. By 1870, the number of subordinate lodges had grown to 338, with an aggregate membership of around 20,000. The Grand Lodge met at Odd Fellows Hall for an annual meeting called the Annual Communication on the third Tuesday in November. A Semi-annual Communication also was held in this hall on the third Tuesday in May.

Membership grew to over 76,000 by the turn of the twentieth century, and the Odd Fellows Hall was proving to be too small. Early in 1907, the Indiana Grand Lodge of the Independent Order of Odd Fellows voted to tear down the Hall and replace it with a taller office building. The architectural firm of Rubush & Hunter drew up plans for the new building and existing tenants were offered office space in the new structure. One tenant, Lewis Baum, was not satisfied with the terms and tried to negotiate a better deal on his lease, which ran to 1908. Baum's second floor office was the location of the Aetna Mortgage and Loan Company. The Odd Fellows would not agree to Baum's demand for $10,000 in moving expenses and a new ten-year lease in the future building at $35 per month. They demanded he vacate the premises by June 22nd or face the wrecking ball.

Lewis did just that, working in his office for several days in June while the building was being demolished around him. The story made it into the local newspaper and folks stood on the street, waiting to see if Lewis would give up. Holes in the ceiling damaged his business papers and typewriter but Lewis worked on. On the final day, Lewis was watching from a building across the street with his attorney as the wrecker intentionally dropped broken glass into the office. The next day's newspaper article was headlined "Baum Bows to Fate. Bends the Knee to Bricks. Retires from Perilous Post in Haste and 'Bryant the Wrecker' Wrecks On." Lewis threatened to file a number of lawsuits and the matter was settled out of court; his new office space ended up being across the street at 10 N. Pennsylvania.

The new skyscraper that was built on the site was briefly the tallest building in Indiana at thirteen stories. The new "Odd Fellow Building" was officially dedicated in 1908 and still stands at the corner, with a bank on the first floor. The organization no longer meets in the 80,000-square-foot skyscraper reflecting declining membership in fraternal orders.