Several trail heads lead from the garden or fields to the falls of the Rappahannock River or into the woods, following a small stream that runs through mature woodlands. Interpretive markers feature descriptions and photographs detailing historic resources along the trail. The trail is approximately 1 ½ miles long and passes remnants of an old ice pond, the canal that powered mills in Falmouth, a cemetery and a spring. At the Rappahannock River visitors can fish or observe the shad running in the spring. Bald eagles, herons and many other species of birds are observed on a regular basis. Volunteers from the local chapter of Master Naturalists conduct woodland tours the last Sunday of each month at 2 p.m. The trails are open 10 am – 5 pm. Bikes are not permitted on the woodland trails. A bike rack is available at the Belmont-Ferry Farm Trail terminus. 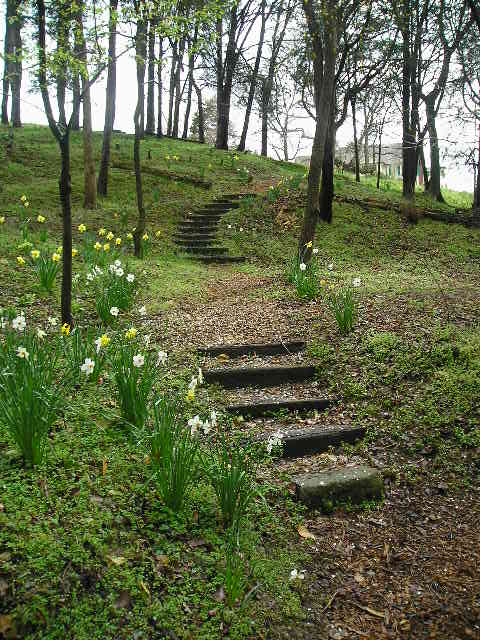 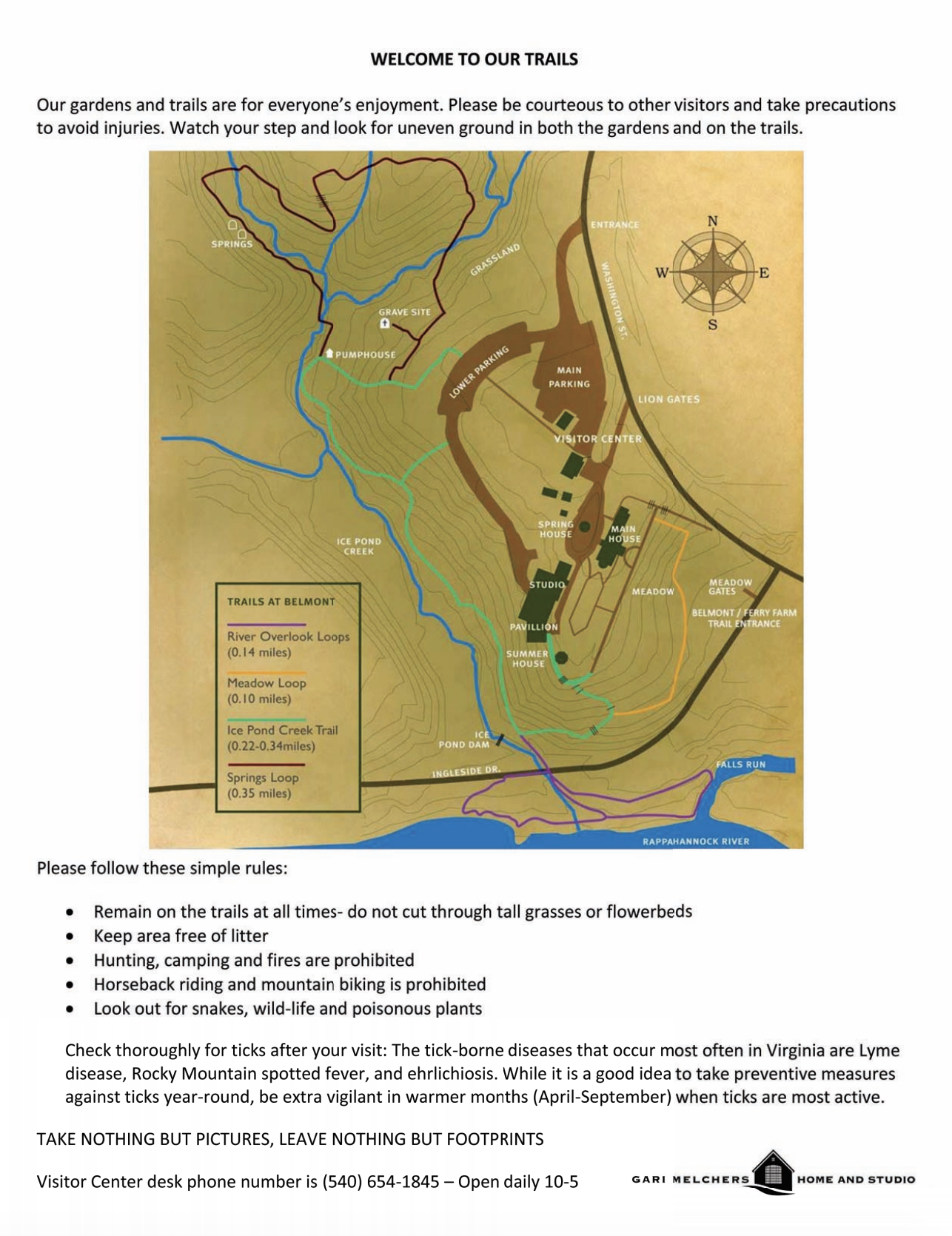 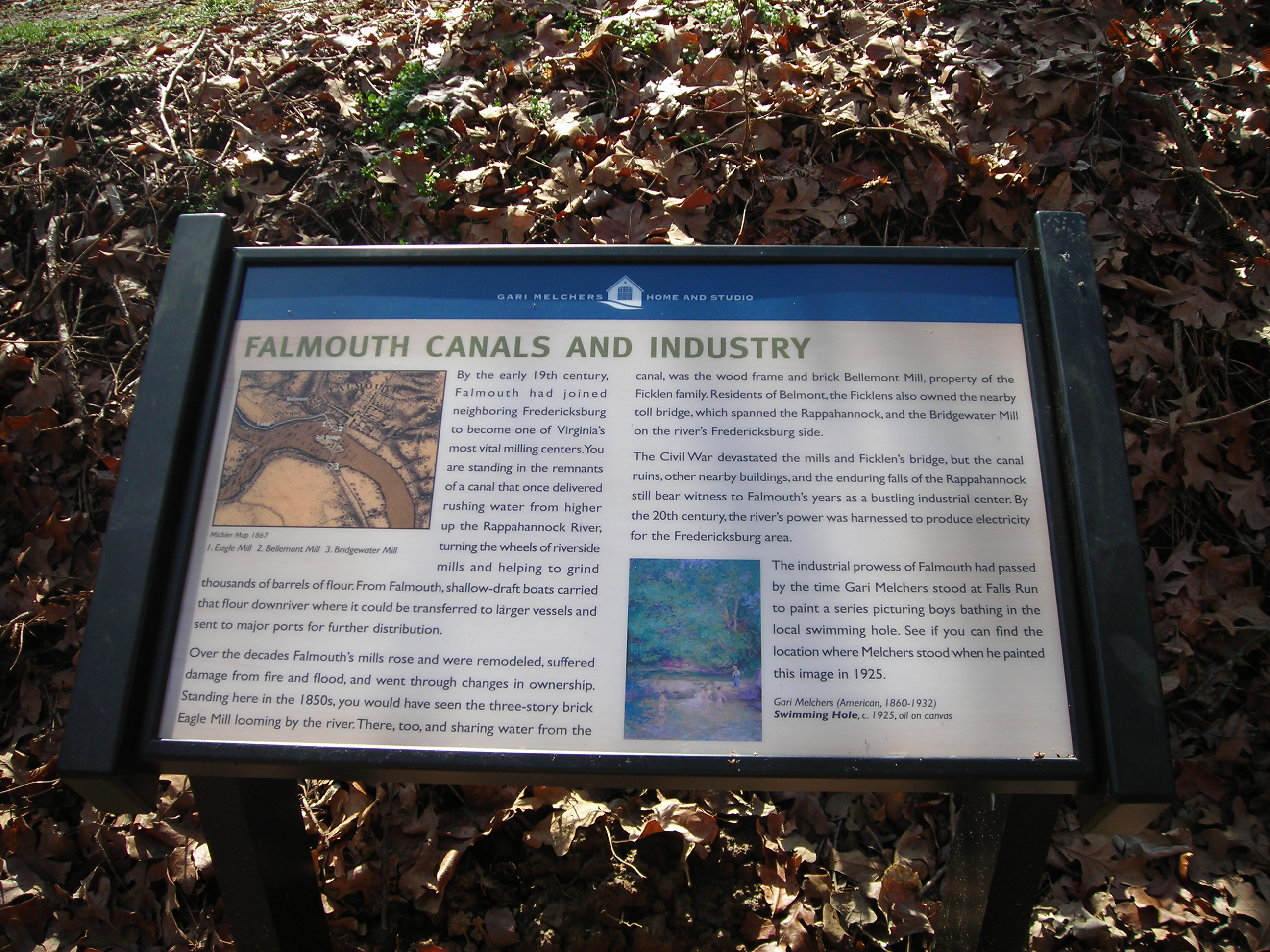 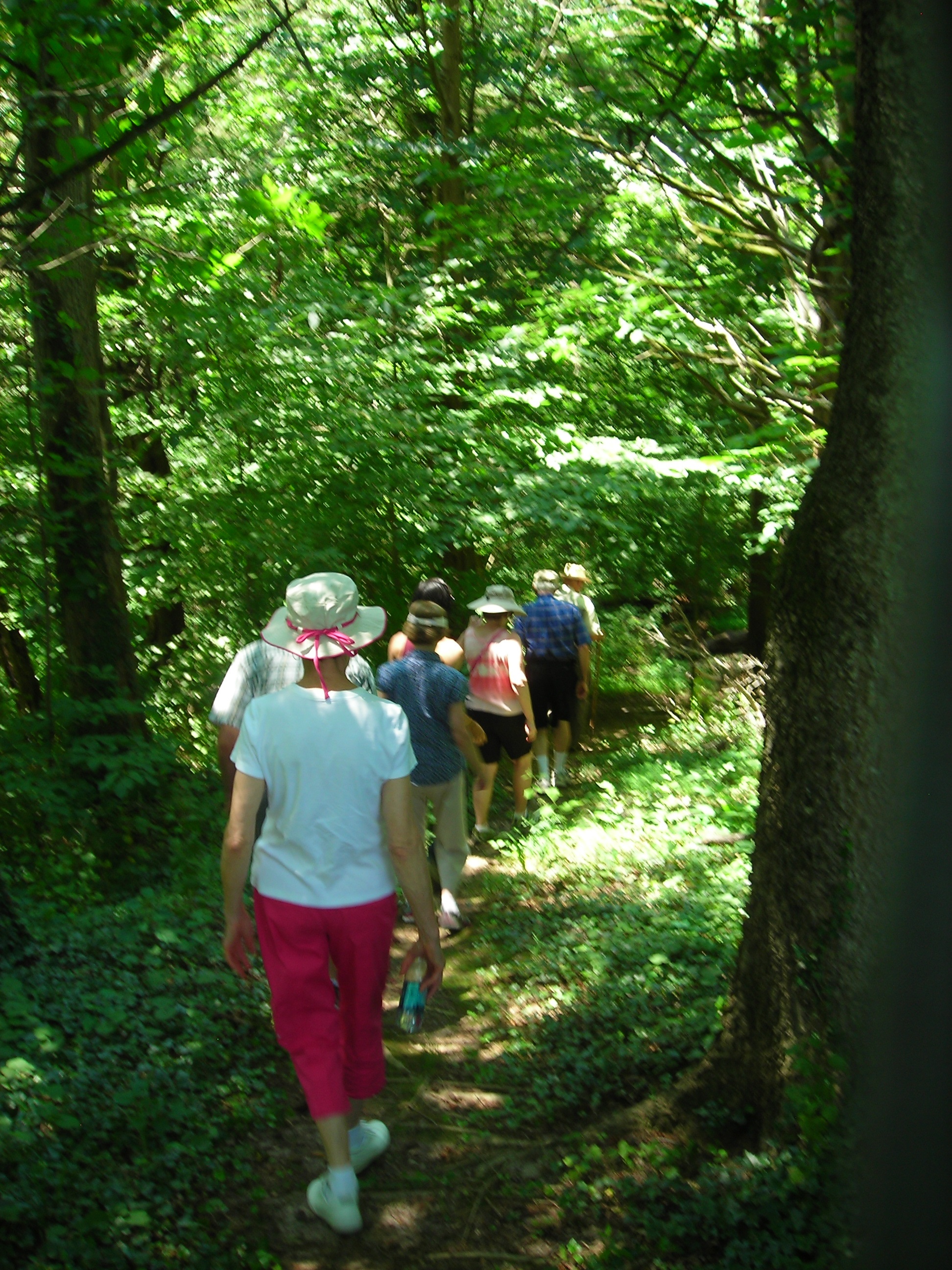 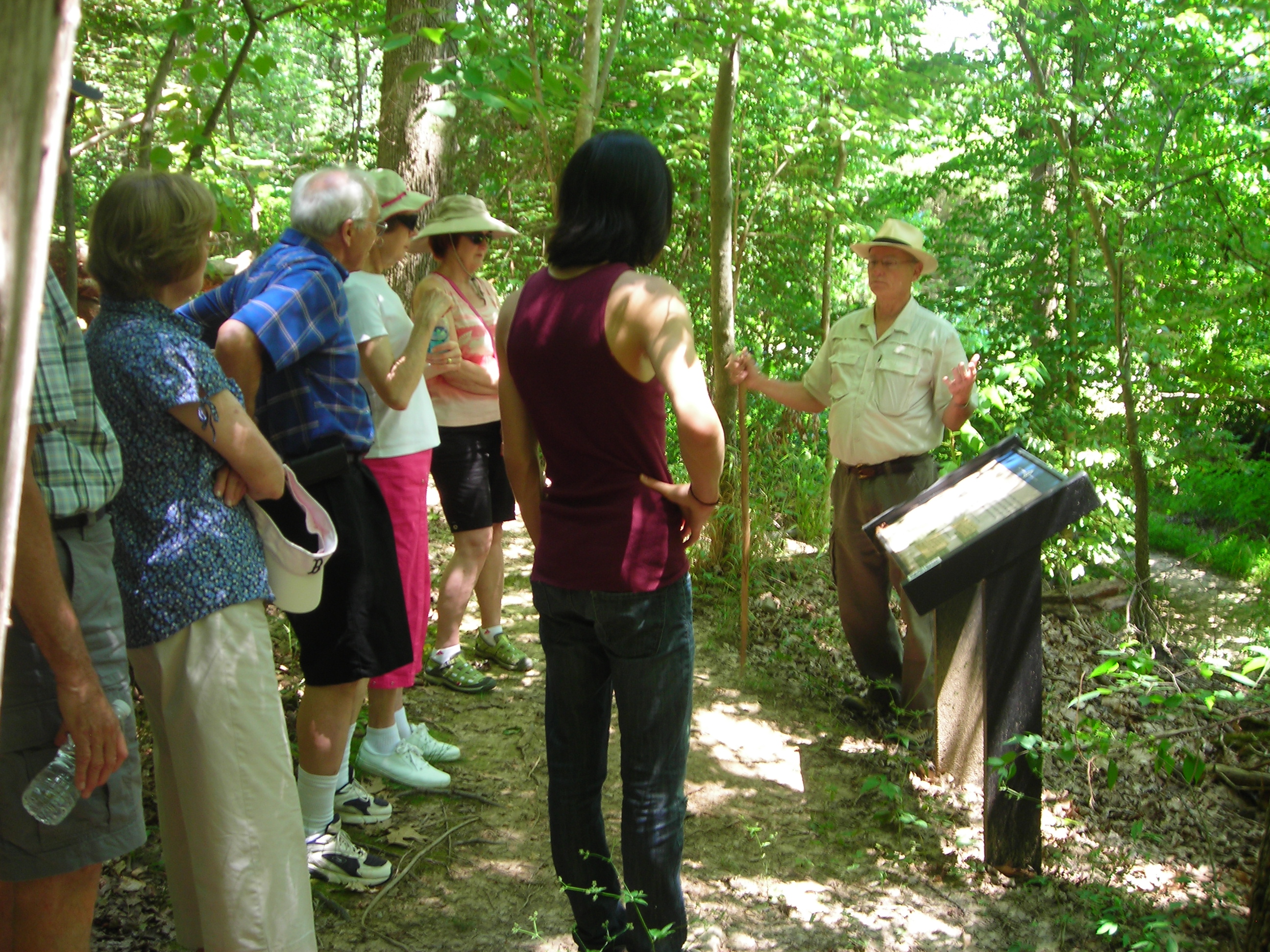 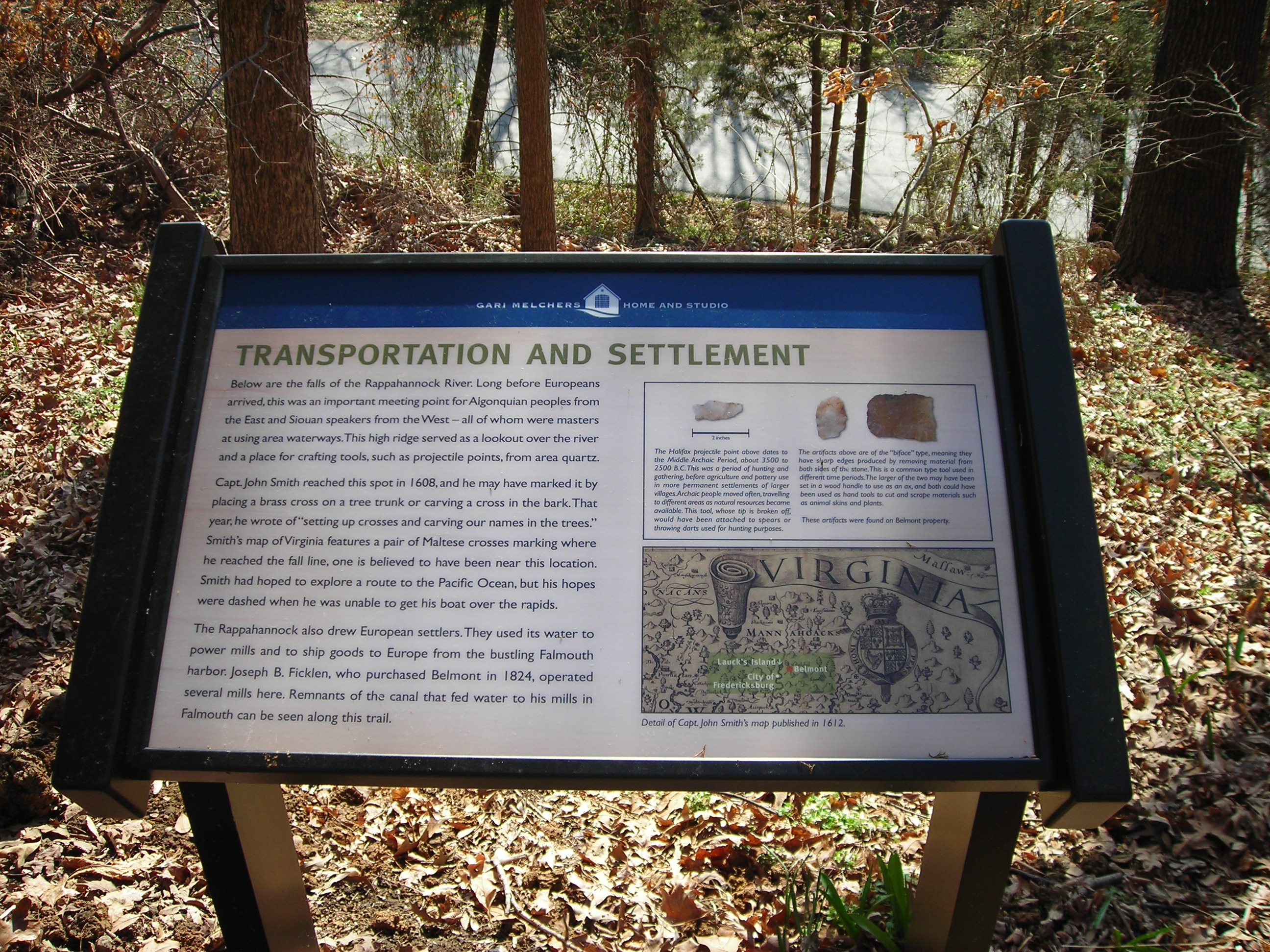 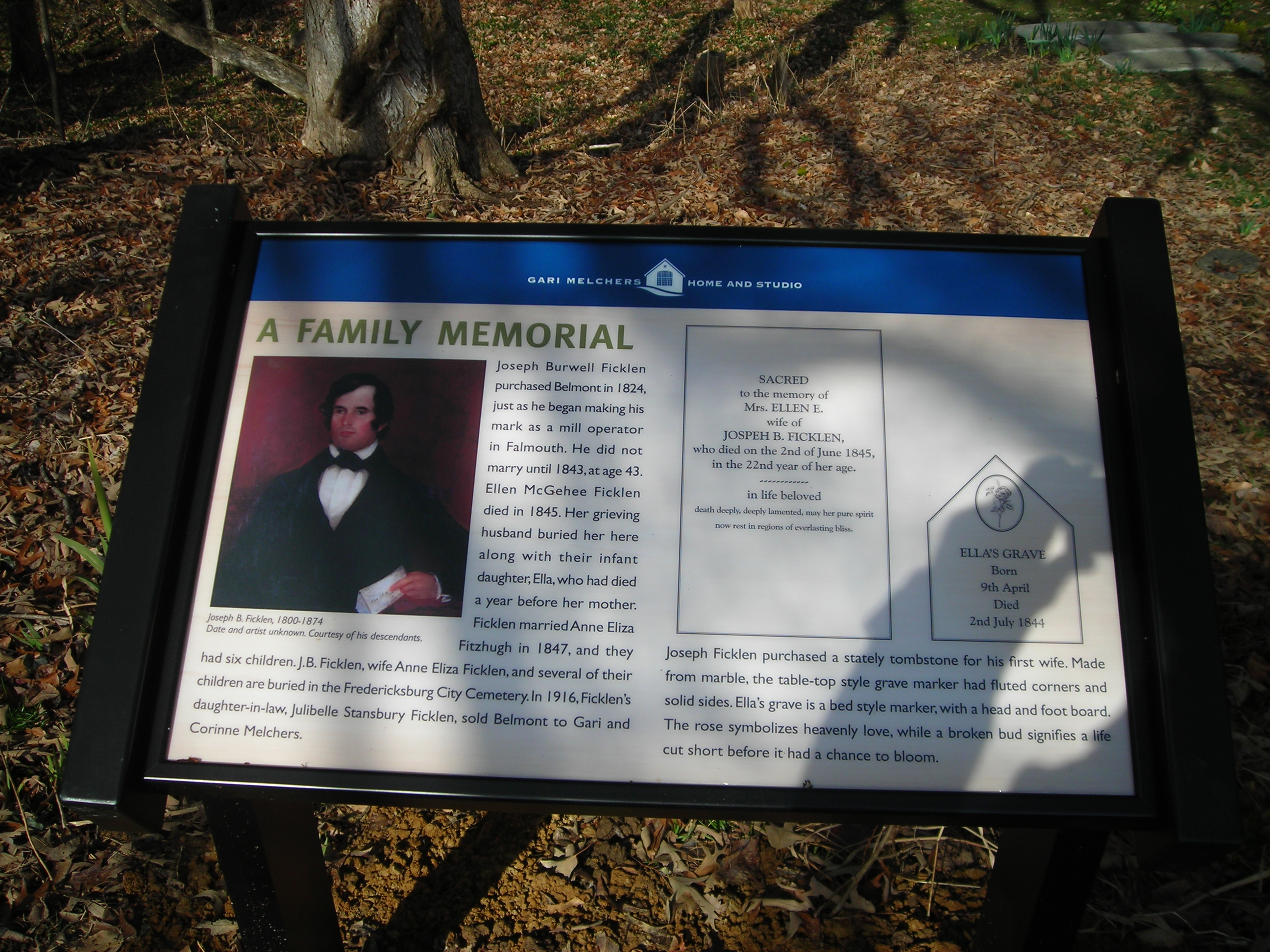 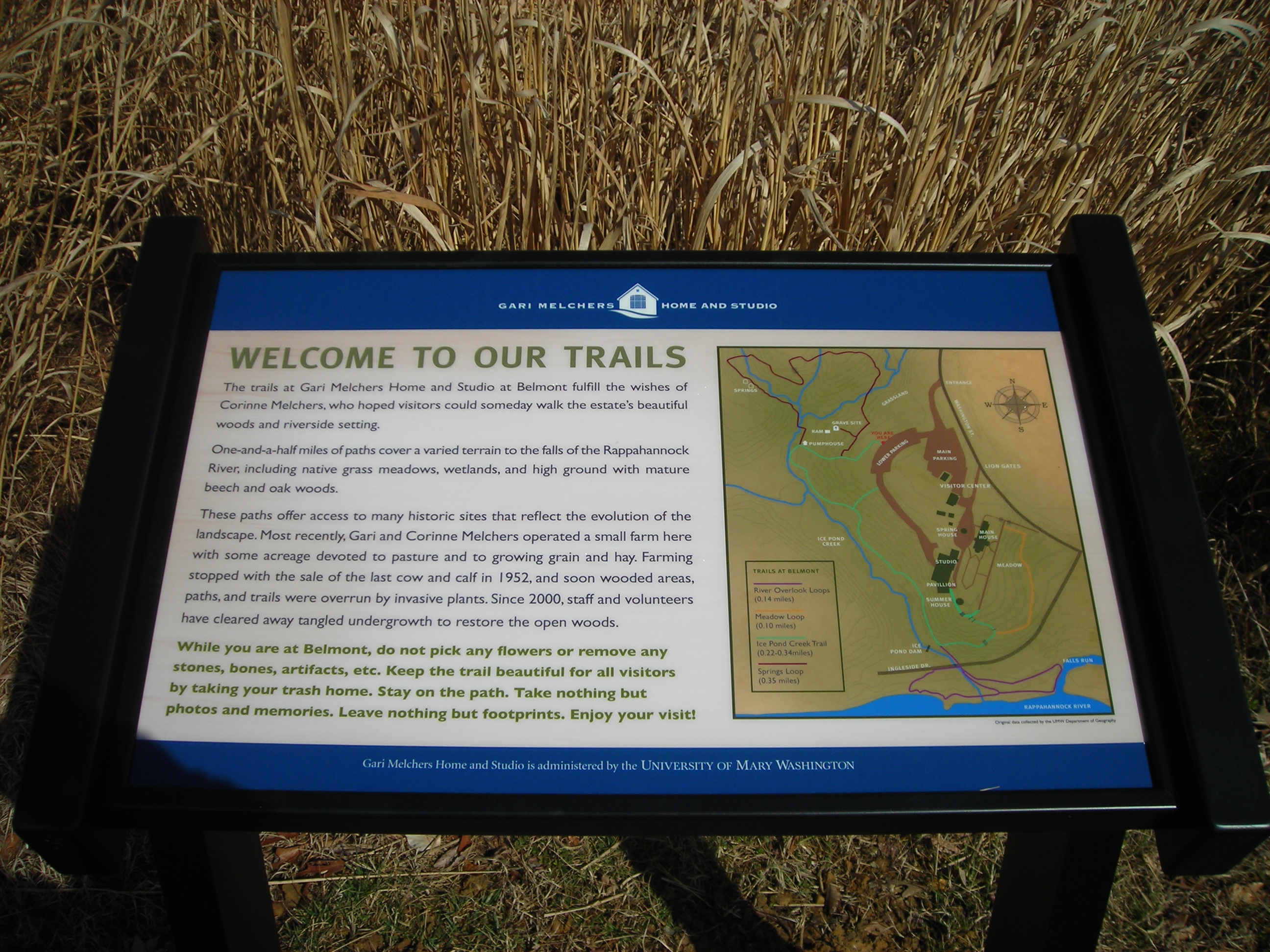 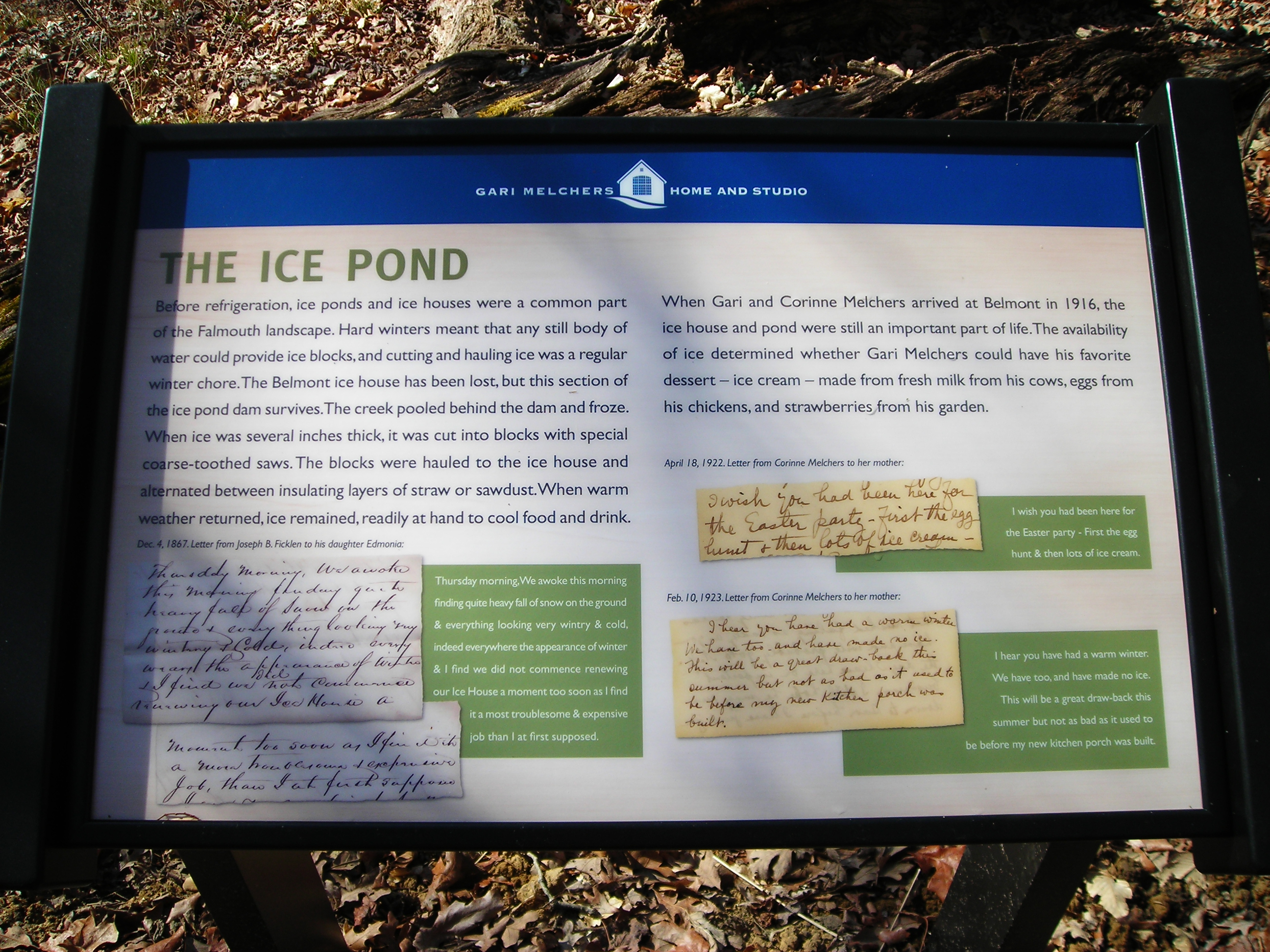 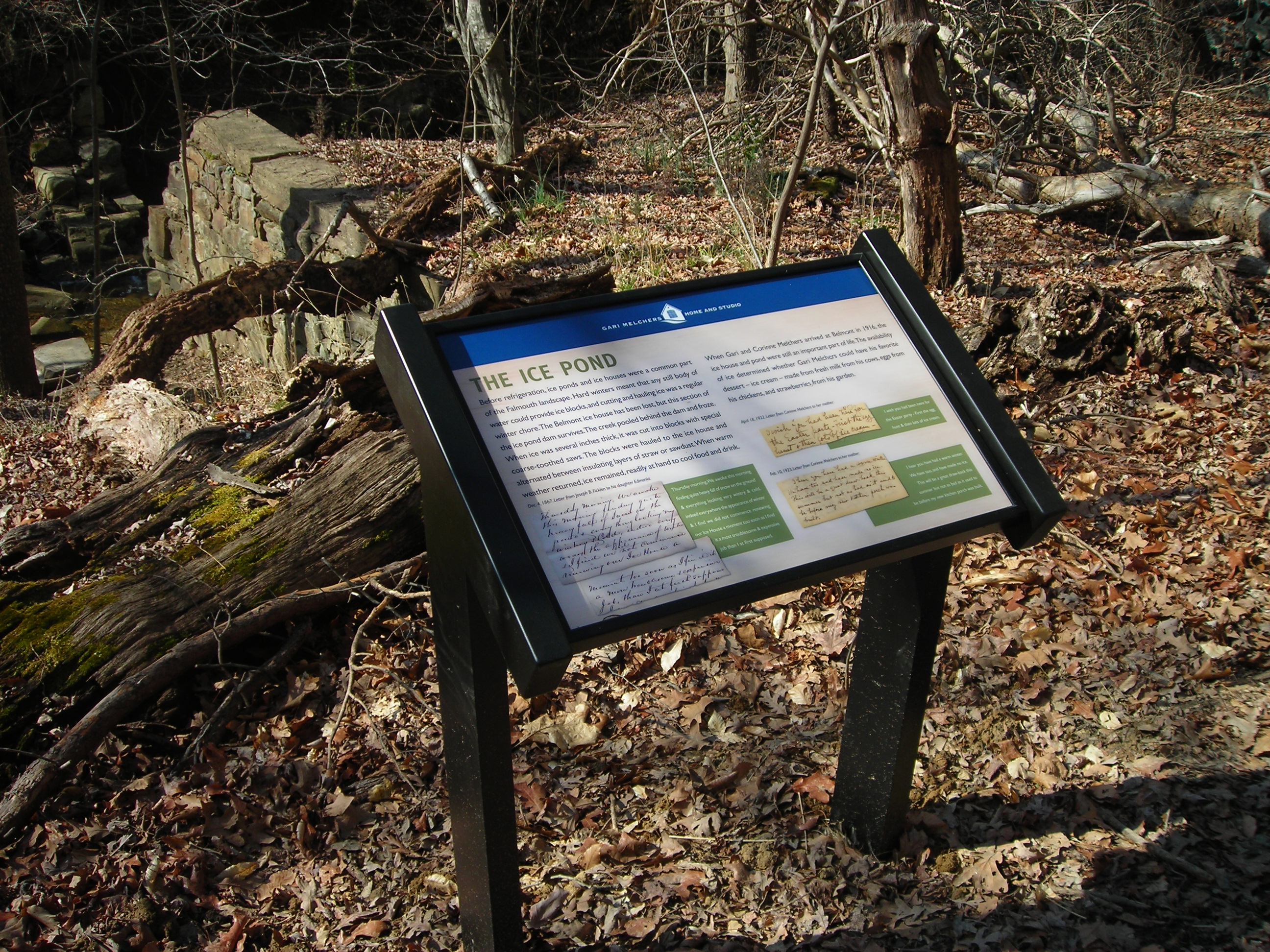 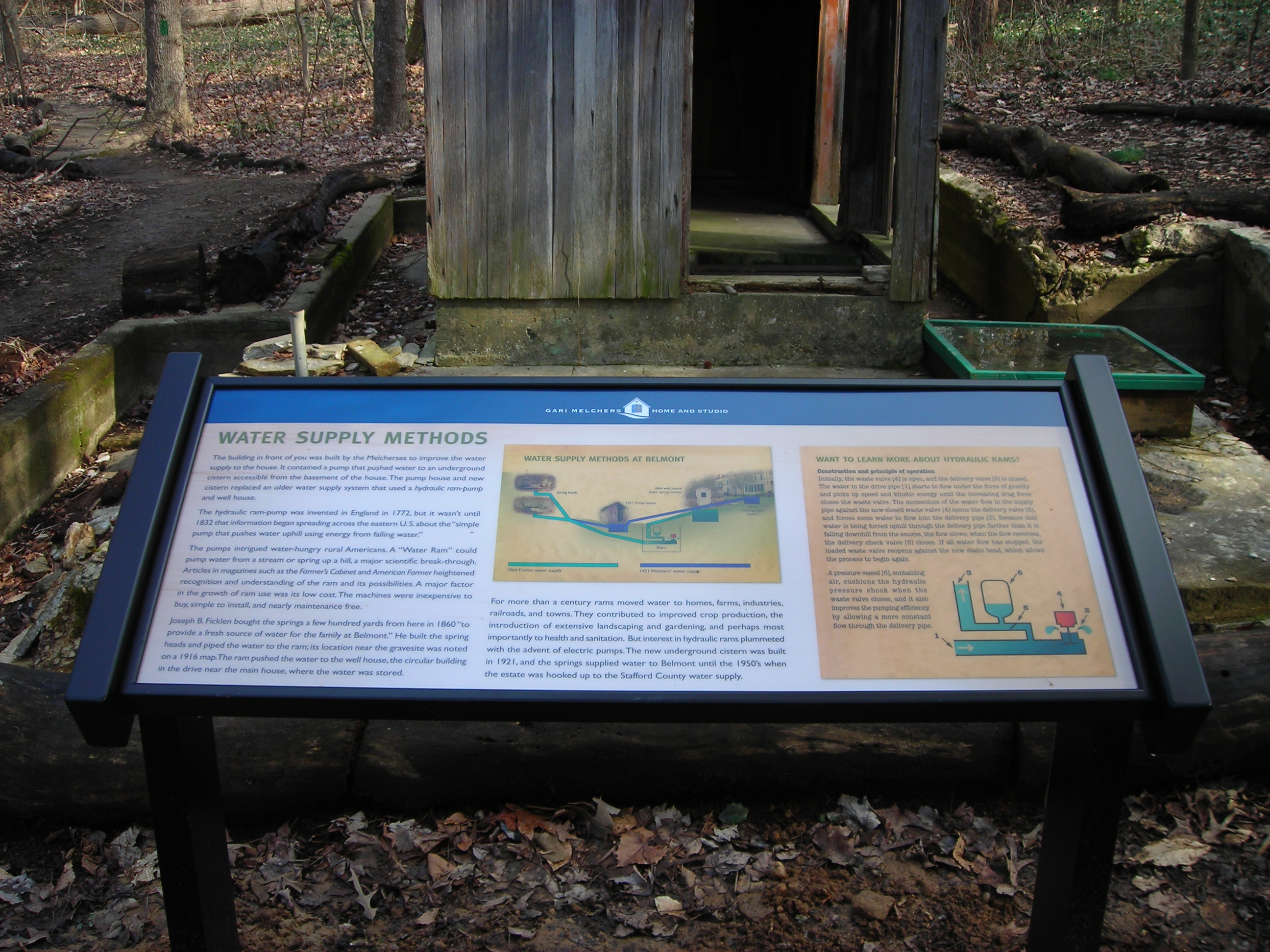 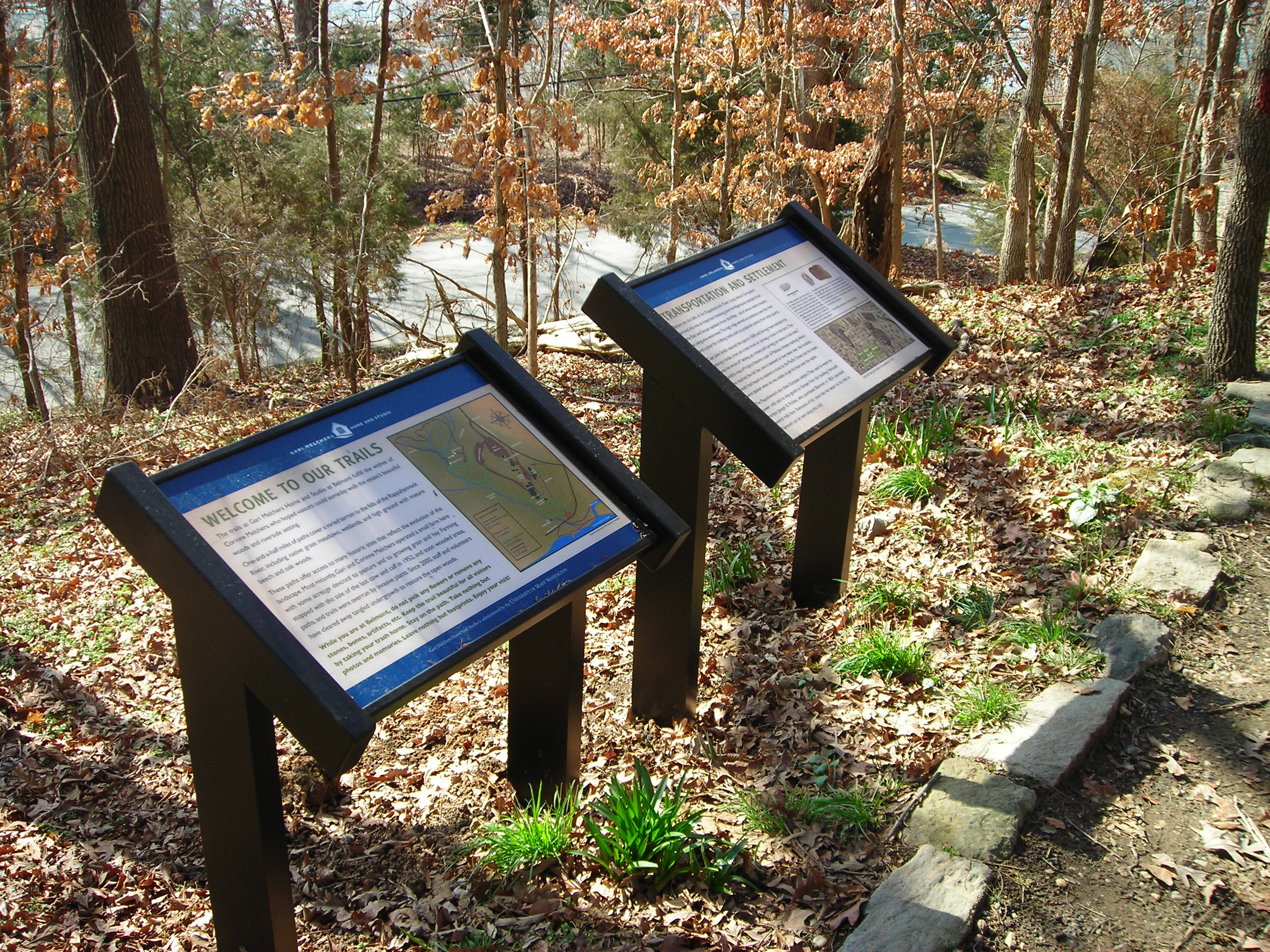 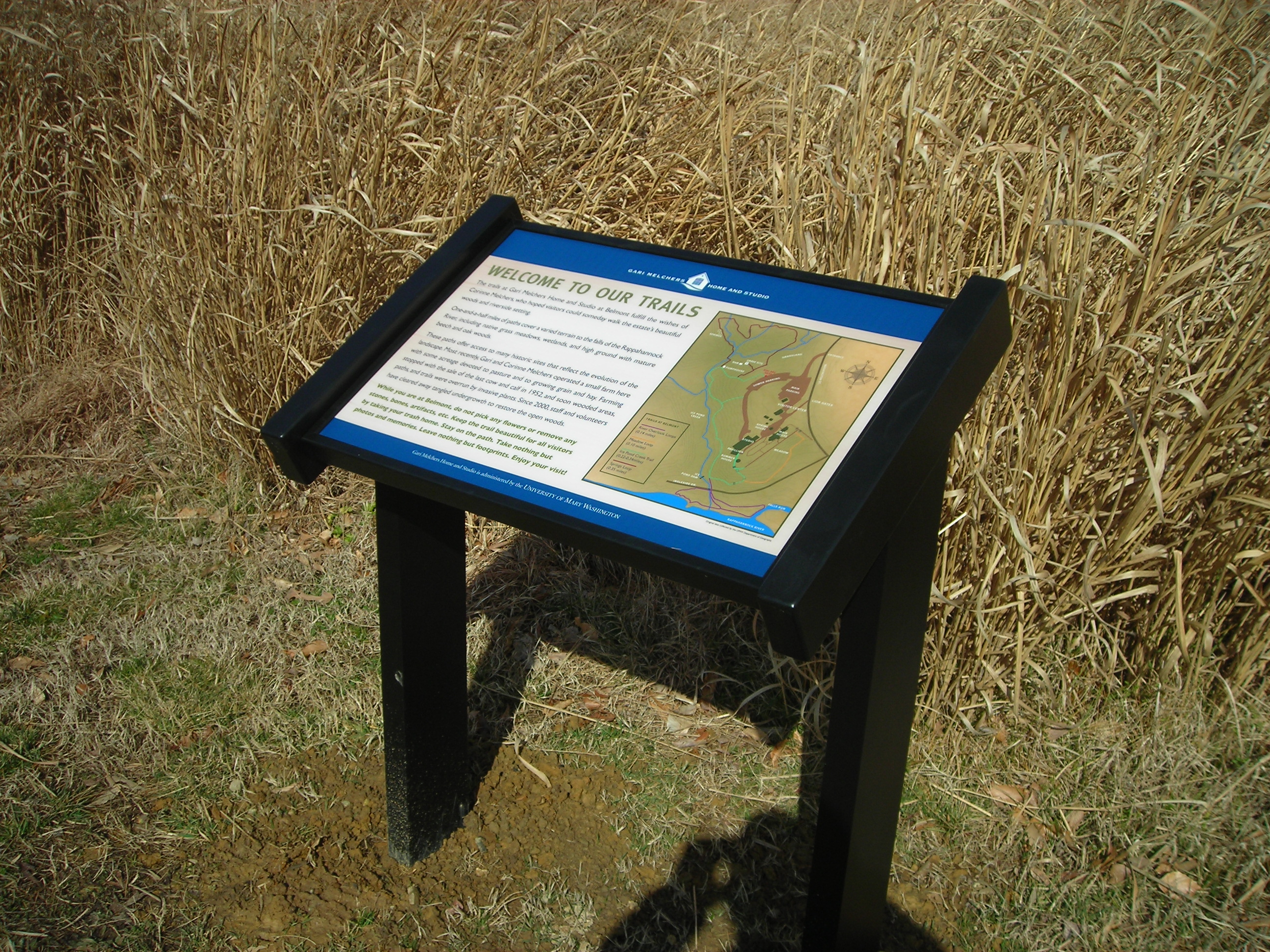 When Gari and Corinne Melchers purchased Belmont in 1916 they acquired a stately house and 22 acres with gardens, hayfields, pasture land and woodlots. Over time, they bought land along the Rappahannock River, an old canal which had fed water power to the mills that once operated in Falmouth, and neighboring lots to create buffer zones on the northeast side of their property. When Corinne Melchers donated the property to the Commonwealth of Virginia in 1942 she wanted the estate to serve as a memorial to her husband, an art center, and as place where people could come and enjoy the natural areas.

Today the estate contains 28 acres of land situated on a ridge overlooking the falls of the Rappahannock River. The river was a major transportation route for area Native Americans, and the falls were a crossroads where the Algonquian speakers of the eastern coastal plains and the Siouan speakers from the western Piedmont met. The high ridge served as a place to keep a look-out while making tools such as arrows and spearheads, many of which have been found on the grounds. The Rappahannock also brought European settlers to the area; they used the water to power mills and ship their goods to Europe from the bustling harbor in Falmouth.

In September of 1943, after Gari Melchers death, Corinne wrote to her dear friend Tom Colt, director of Virginia Museum of Fine Arts in Richmond:

“… a small piece of land was for sale. It was the extension where the springs are and also a field of nine acres planted in grass…My initial thought, which I feel would be an excellent one to carry out when I am gone, is as follows: to use the field for recreational purposes; to create paths along the streams and through the glens, starting in Falmouth and finally leading one to the Warrenton road a half mile distant. This would provide a much needed opportunity for a short promenade in the woods which are very beautiful indeed. I very much count on the pleasure the public will derive form the Melchers Memorial as a park, as well as a shrine for Gari’s pictures and a gallery for contemporary art.”

Belmont has met many of these goals. The public enjoys Gari’s paintings, and has an opportunity to see their home and formal gardens. The woods, however, have not been accessible, and neither have the extended grounds that were part of the everyday life for Gari and Corinne Melchers.

Belmont has decided to try to realize Corinne's vision for the extended grounds at Belmont, and a natural starting point was to restore a path the Melchers developed in 1931