This section of the gallery was reopened in February 2020. It explores the early years of the Regiment's history.

The Royal Canadian Regiment was created initially as a training school for militia officers called the Infantry School Corps. The first galleries present how the regiment was formed and its early duties including the North West Field Force in 1885 and the Yukon Field Force in 1899. 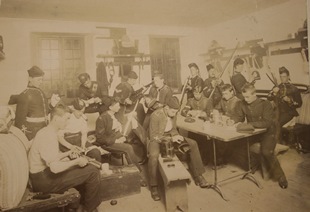 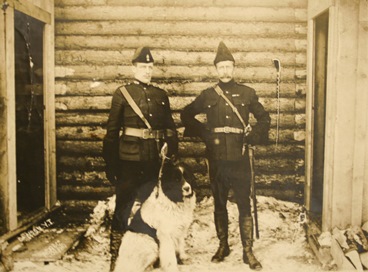 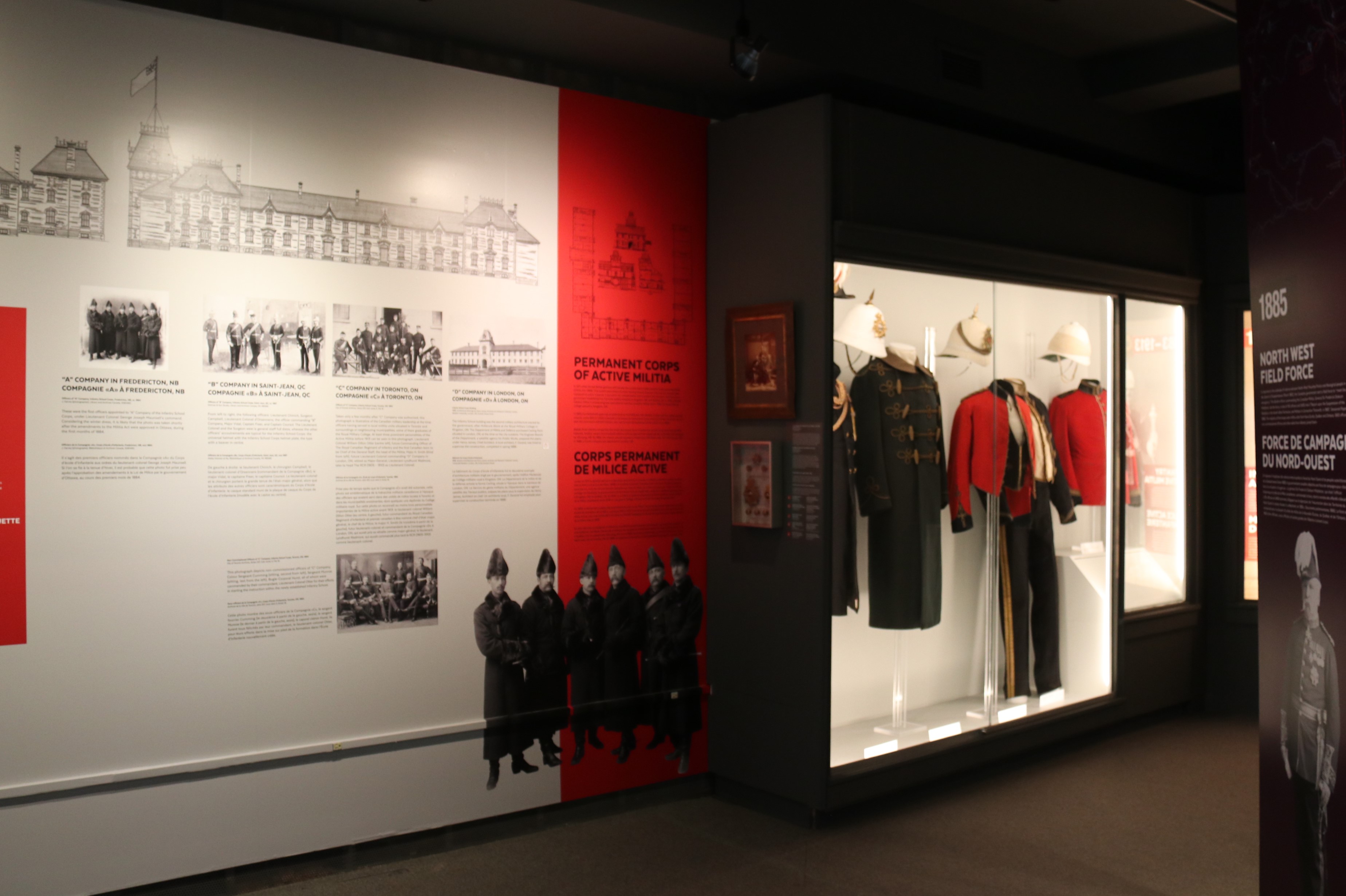 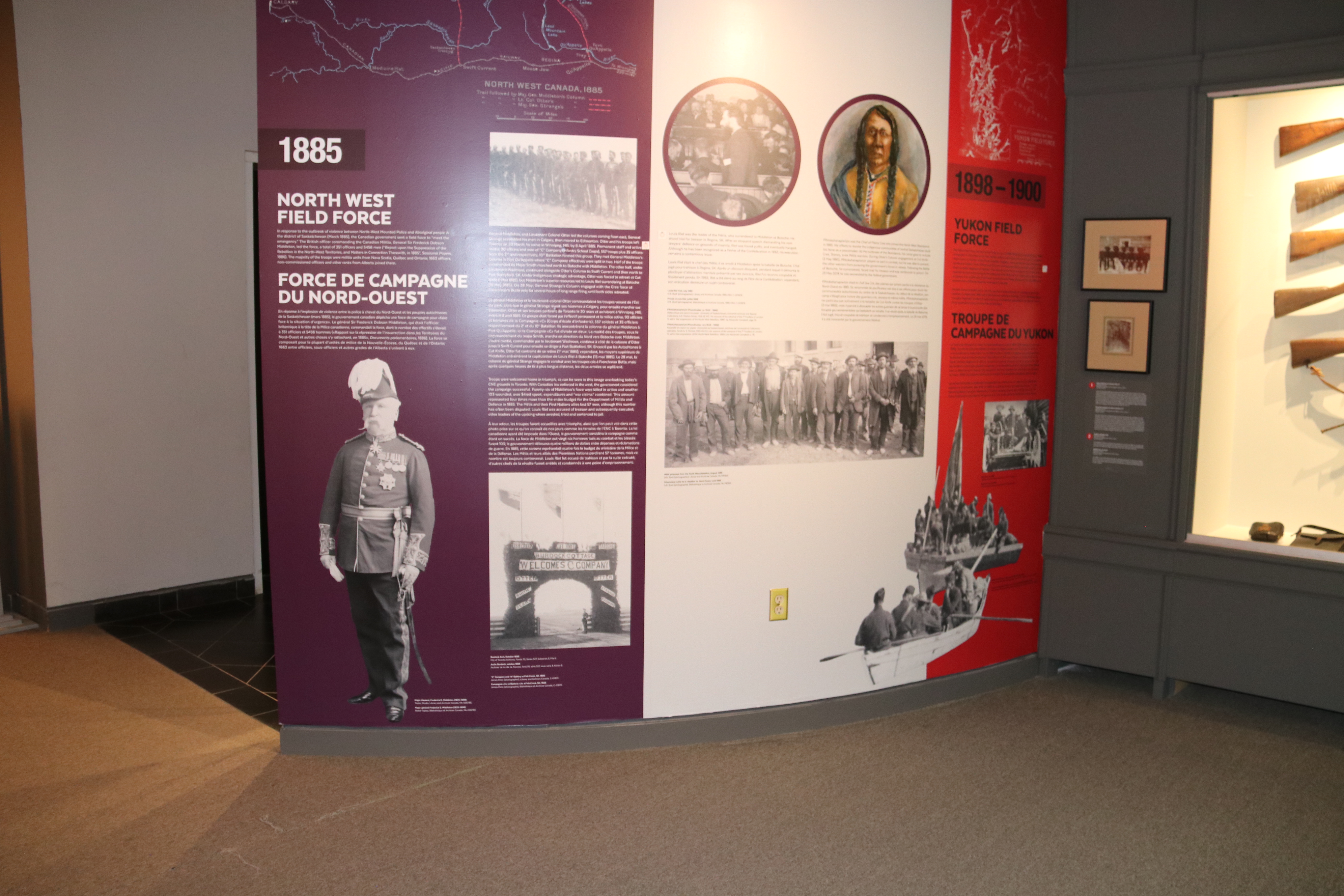 In 1871, when the last British garrisons left Canada, the country had a military system known as Active Militia (Militia Act, 1868). This system permitted voluntary training several days per year, but the recruits were equipped at public expense. It proved to be undependable and to protect the boarders, the Dominion government established two full-time artillery batteries in Kingston, ON, and Québec, QC. In 1874, a British General Officer Commanding was appointed to lead the Canadian Militia, and in 1876 the Royal Military College opened in Kingston, ON.

In 1883, the Parliament approved amendments to the Militia Act: the addition of paid staff for militia training schools, some 850 to 1,000 members to be known as Permanent Corps of Active Militia. Their role was to train the dominion’s 40,000 infantry who had formed the backbone of the militia since 1868.

1883: General Order no. 26 of 21 December “The formation of three schools of Infantry having been authorized, the requisite number of Militiamen will be enrolled, and formed into one Corps to be known as the Infantry School Corps.” By 1884, the infantry schools opened in Fredericton, NB, Saint-Jean, QC, and Toronto, ON. In 1886, a fourth company was approved in London, ON.

Scattered across Eastern Canada, with separate leadership responding directly to the Militia Headquarters in Ottawa, the four companies functioned as separate entities. By the end of 1880s, the common spirit inspiring enthusiasm, devotion, and strong regard for the honor of the group or esprit de corps was lacking. The same inefficiency was detected within the other formations of the Permanent Corps and to rectify the situation, the government decided to proceed with changes in the organizational scheme of the Permanent Corps. In 1892, all formations received regimental status as follows: Regiment of Canadian Dragoons, Regiment of Canadian Artillery and Regiment of Canadian infantry. Two years later, they would all be granted the prefix “Royal.”

In response to the outbreak of violence between North-West Mounted Police and Aboriginal people in the district of Saskatchewan (March 1885), the Canadian government sent a field force to “meet the emergency.” The British officer commanding the Canadian Militia, General Sir Frederick Dobson Middleton, led the force, a total of 351 officers and 5456 men (“Report upon the Suppression of the Rebellion in the North-West Territories, and Matters in Connection Therewith, in 1885”, Sessional Papers, 1886). The majority of the troops were militia units from Nova Scotia, Québec and Ontario; 1663 officers, non-commissioned officers and other ranks from Alberta joined them.

General Middleton, and Lieutenant Colonel Otter led the columns coming from east, General Strange assembled his men in Calgary, then moved to Edmonton. Otter and his troops left Toronto on 20 March, to arrive in Winnipeg, MB, by 8 April 1885. Permanent staff and active militia, 90 officers and men of “C” Company (Infantry School Corps), 557 troops plus 35 officers from the 2nd and respectively, 10th Battalion formed this group. They met General Middleton’s Column in Fort Qu’Appelle where “C” Company effectives were split in two. Half of the troops commanded by Major Smith marched north to Batoche with Middleton. The other half, under Lieutenant Wadmore, continued alongside Otter’s Column to Swift Current and then north to Fort Battleford, SK. Under Indigenous strategic advantage, Otter was forced to retreat at Cut Knife (1 May 1885), but Middleton’s superior resources led to Louis Riel surrendering at Batoche (15 May 1885). On 28 May, General Strange’s Column engaged with the Cree force at Frenchman’s Butte only for several hours of long range firing, until both sides retreated.

The Yukon Field Force was formed by Order-in-Council 1899-0596 (approved on 19 March 1898). Composed of 203 officers and men, cavalry, artillery and infantry, the unit was commanded by Major Evans, a member of the Royal Canadian Dragoons, who received the rank of temporary Lieutenant Colonel. Three officers plus 130 non-commissioned officers and men came from the Royal Canadian Regiment of Infantry. They were all sent to Yukon in support of the civil power to maintain law and order during the Klondike Gold Rush. Based at Fort Selkirk, with a detachment at Dawson City, capital-city of the newly formed Territory (Yukon Territory Act, 13 Jun 1898), their presence also reinforced Canadian sovereignty in the area.

“Report upon the Suppression of the Rebellion in the North-West Territories, and Matters in Connection Therewith, in 1885”, Sessional Papers, 1886 https://www.canadiana.ca/view/oocihm.92682/1?r=0&s=1

University of Saskatchewan, University Archives and Special Collections, A.S. Morton fonds, MSS 49 #17, “An account of the advance of the 7th Fusiliers of London. To aid in the suppression of the North West Rebellion, 1885”, by Alexander Campbell, page 79.

"Yukon District-Composition of force of 200 men for rates of pay, allowances etc." Orders in Council 1898-0596 Approved on 19 March 1898 https://www.bac-lac.gc.ca/eng/discover/politics-government/orders-council/Pages/item.aspx?IdNumber=81548