The CSS Neuse Interpretative Center in Kinston, North Carolina preserves one of the 26 original ironclad warships commissioned by the Confederate Navy in the Civil War. It was scuttled to prevent capture by Union troops as several units converged around Kinston in 1864. There were 15,000 Civil War artifacts recovered when the remains of the Neuse was rescued in the 1960s. The center also has temporary Civil War displays and admission is free.

The 158' Neuse was the Confederate Navy's answer to a more robust Union Navy. 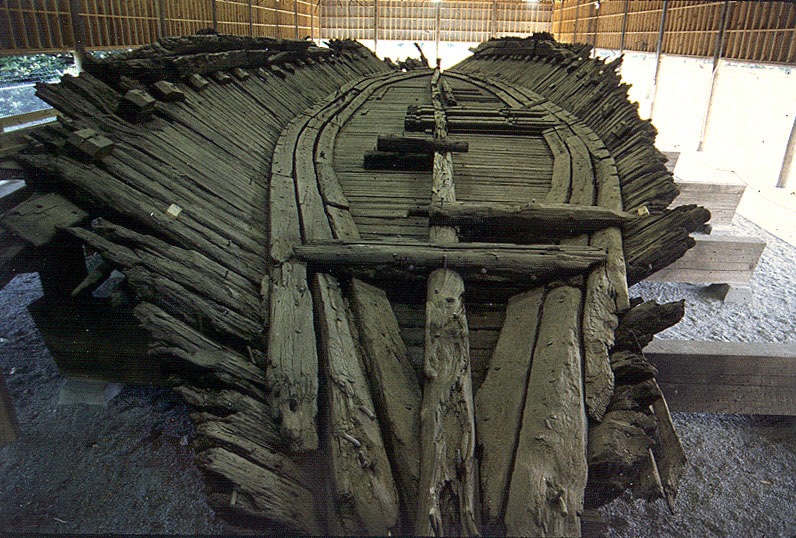 An artist's rendition of what the CSS Neuse looked like before it was scuttled in 1864. 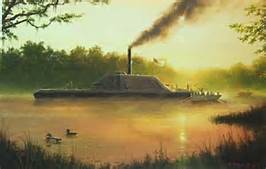 The ironclad possessed some small but significant advantages to its design compared to that of its contemporaries. The ironclad’s skeleton was made of wood, yellow pine for the Neuse, and was later fitted with steam engines, machinery, and iron plating around the hull. The ironclad was also equipped with Brooke rifles, and due to the size of many of the ironclads, they could equip more of these higher powered rifles than Union warships.

The Neuse only saw battle once briefly before it was scuttled. The Neuse was commissioned by the Navy Department on October 17, 1862 to be built by Howard & Ellis, a shipbuilding firm in White Hall, NC on the banks of the Neuse River. The shape of the Neuse was to have a flat bottom, more like a barge than a typical warship. This allowed carpenters that possessed simple home-building skills to be involved in its construction. After its contracted delivery date on March, 1 1863, the Navy Department planned on fitting the iron plating on the hull, loading the steam engines, and mounting two Brooke rifles.

The Neuse in White Hall was nearing completion of the wooden frame when Union troops, led by General John G. Foster, approached along the riverbank. The Federals were following retreating Confederates from Kinston, NC when they spotted the Neuse attempting to escape. The Federals heavily shelled the frame of the Neuse and were convinced that the ship had been destroyed. The next day, Confederates gladly realized that the ship was still intact and that it had sustained very little damage. So the Neuse floated to its next destination in Kinston, NC.

While in Kinston the Neuse was scheduled to be iron plated, but the availability of iron in the South was very low during the whole war. This was compounded by the Confederate railroads that were monopolized by the Army while transporting troops. This caused strain between the Navy and the Army as well as significantly delayed the construction of the Neuse. Robert E. Lee and Jefferson Davis had to abandon two planned attacks on the port city of New Bern that had been capture two years before because the ironclad was still not ready for the river.

Finally, on April 22, 1864, nearly two years late, the Neuse steamed down the river towards New Bern. It only travelled half of a mile before it became stuck on a sandbar. It was the middle of May before the water rose enough to loose the ship. By this time many of the ground troops that defended the Neuse had been sent to VA as reinforcements. Ground troops at the time were necessary for any attack that involved ironclads; those ground troops’ absence caused the Neuse to be moored at Kinston until it was sacrificed to prevent Union capture. It was Department of North Carolina commander Braxton Bragg that ordered the scuttling of the Neuse. In the face of Union troops moving on Kinston from New Bern, Bragg ordered the ship to fire on the advancing Federals a few times before setting the great warship afire.