Pre-Civil War Period This two-room house built ca. 1840 provided living quarters for two families. The duplex plan was common for enslaved family housing. A central chimney separated two living quarters with an entrance door and window on each side. Fireplaces downstairs were used for heating and cooking, and steep ladders led to the sleeping chambers upstairs. White-washed studs and siding were exposed on the interior; and evidence of this remains on the original walls and ceilings. Whitewash is caustic and was traditionally used to preserve wood and to kill insect eggs. The white color of the lime mix also served to make rooms brighter as it reflected light from the windows, fireplaces, and candles. Sash windows, as seen on the first floor of the building, were rarely used on slave quarters, and their presence elevated the quality of this building. The second floor, however, likely had just a wood window covering for protection and ventilation. Post-Civil War Period The cottage sustain damage during the Civil War and was reassembled post-war as a one-family home. A single front door now offered access; the other door was replaced by a window. Interior doors were cut into the walls next to the chimney upstairs and down, and access to the upstairs was provided by a single staircase rather than the earlier ladder stairs. The second story was raised by about a foot to give more headroom, and a shed was added to the back. A full-width porch with a standing seam roof was attached on the side facing Washington Street. Ficklen family servants continued to live here; likely those formerly enslaved who chose to stay on as paid staff after emancipation. The Federal Census of 1870 lists Robert and Rachel Watts, ages 75 and 66, as occupants in the house. They are recorded as “B” (Black), and the census notes their occupation as “domestic servants.” Melchers Period The artist Gari Melchers and wife Corinne purchased Belmont in 1916. They made improvements to the building, and it was during their time that the cottage took on its present appearance. They raised the second floor and added shed dormers. Washington Street was lowered sometime in the 1920s, and the wide front porch had to be removed. A porch and new entry were built on the west gable end, and a screen porch was attached to the east. A modern kitchen was added to the back shed addition, and the house was modernized with a full bath and central heating. The interior walls were plastered which helped with heat retention and made the house easier to keep clean. Melchers’ caretaker Mason Dillon and his family made this their home from ca. 1917 until Dillon retired in 1963. Currently, the Caretaker's Cottage is owned by the University of Mary Washington. 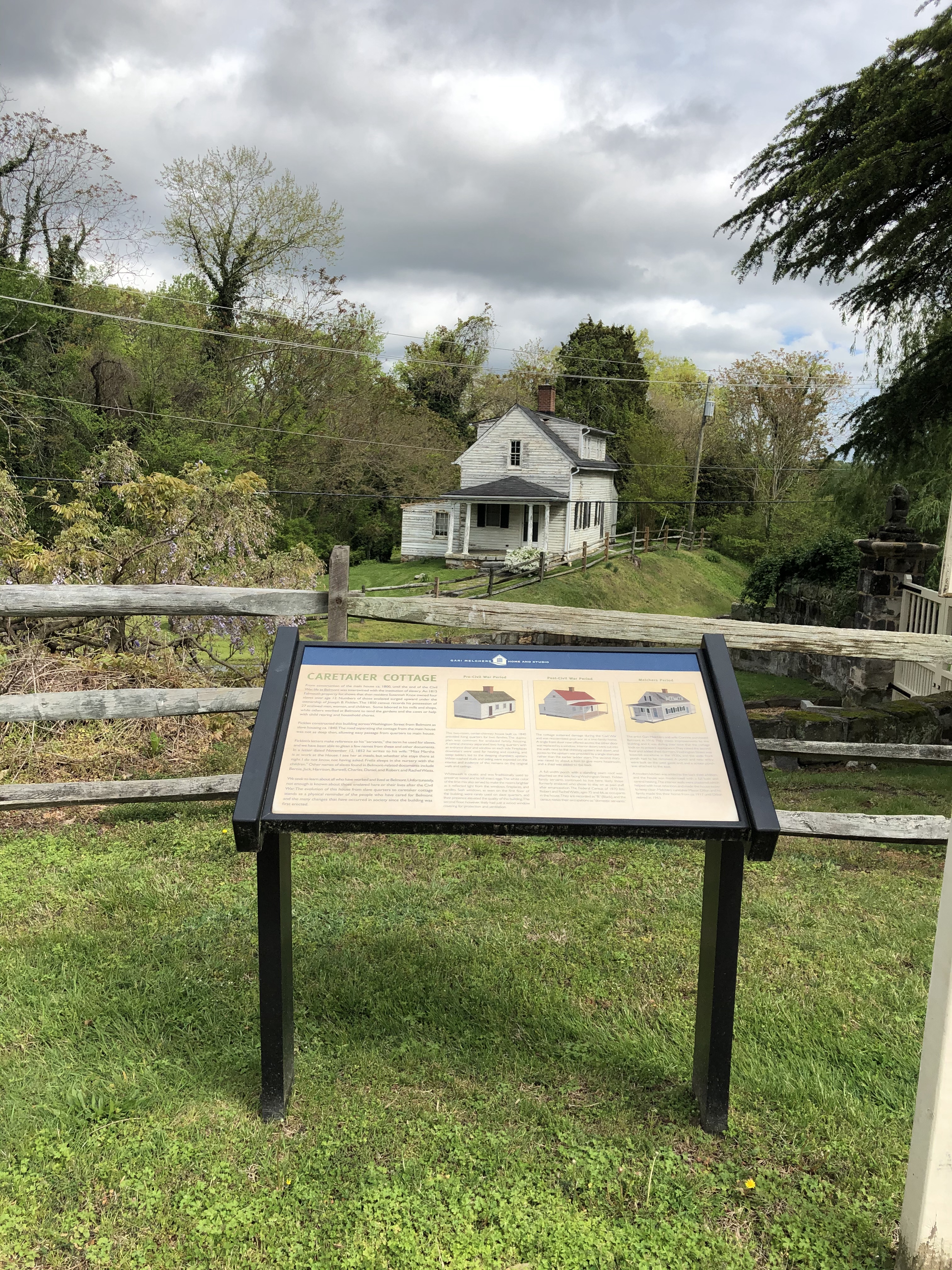 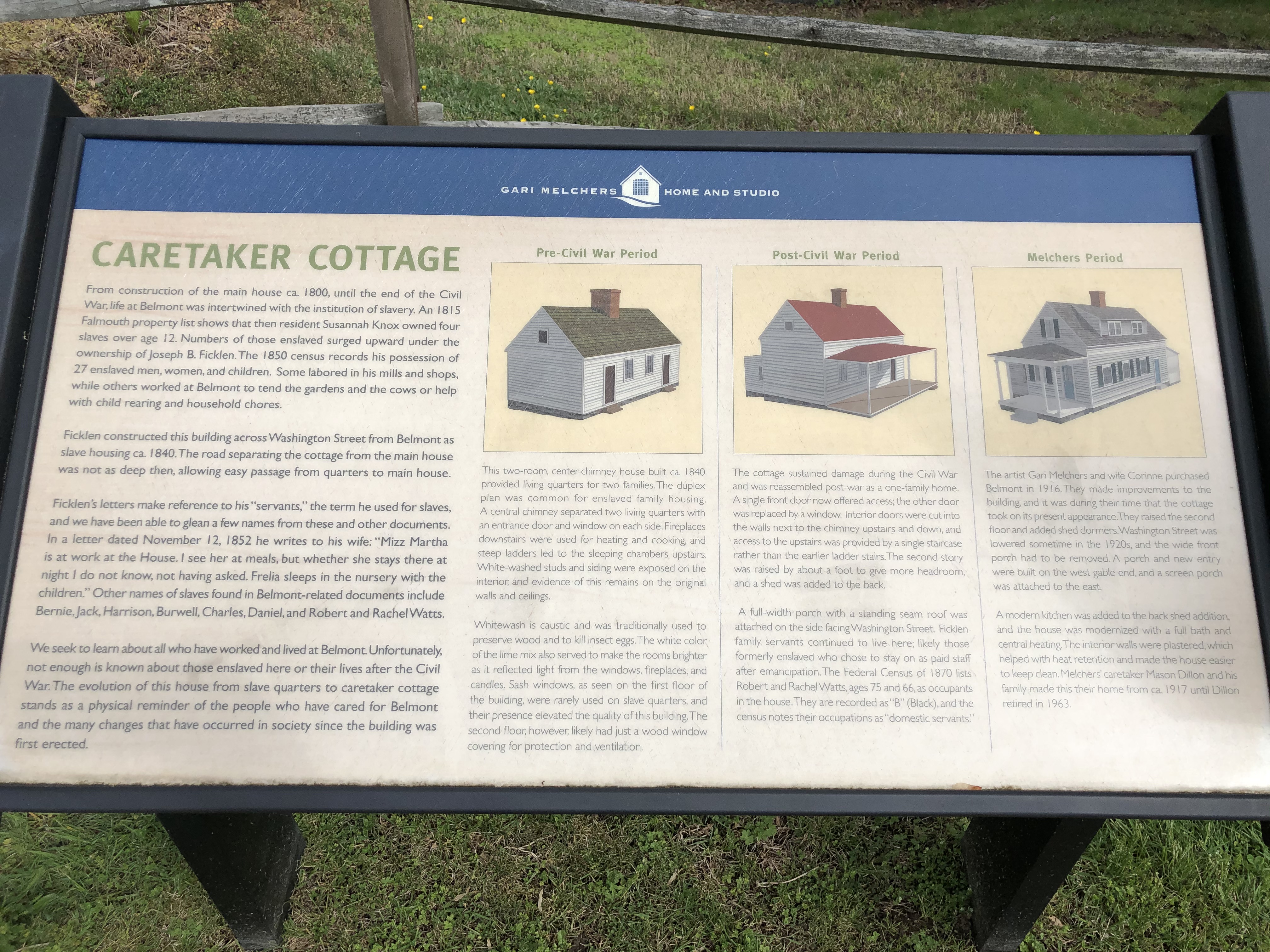 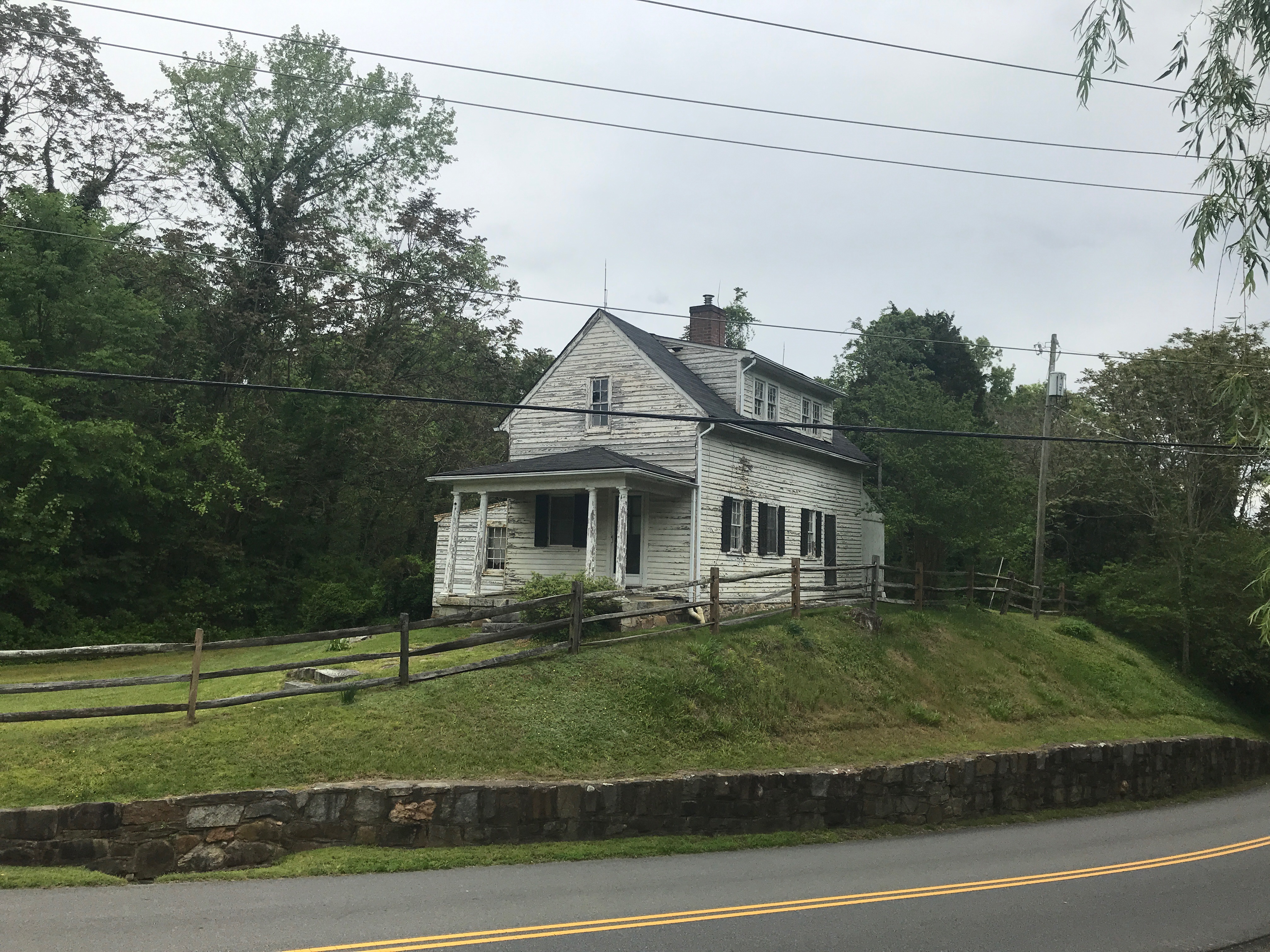 From construction of the main house ca. 1800, until the end of the Civil War, life at Belmont was intertwined with the institution of slavery. An 1815 Falmouth property list shows that then resident susannah Knox owned four slaves over the age of 12. Numbers of those enslaved surged upward under the ownership of Joseph B. Ficklin. The 1850 census records his possession of 27 enslaved men, women, and children. Some labored in his mills and shops, while others worked at Belmont to tend the gardens and the cows or help with child rearing and household chores.

Ficklen constructed this building across Washington Street from Belmont as slave housing ca. 1840. The road separating the cottage from the main house was not as deep then, allowing easy passage from quarters to main house.

Ficklen's letters made reference to his "servants," the term he used for slaves, and we have been able to glean a few names from these and other documents. In a letter dated November 12, 1852 he writes to his wife: "Mizz Martha is at work at the House. I see her at meals, but whether she stays there at night I do not know, not having asked. Frelia sleeps in the nursery with the children." Other names of slaves found in Belmont-related documents include Bernie, Jack, Harrison, Burwell, Charles, Daniel, and Robert and Rachel Watts.

We seek to learn about all who have worked and lived at Belmont. Unfortunately, not enough is known about those enslaved here or their lives after the Civil War. The evolution of this house from slave quarters to caretaker cottage stands as a physical reminder of the people who have cared for Belmont and the many changes that have occurred in society since the building was first erected.