The Bel Air Colored school was created in 1924 but didn’t open until 1935. This building is the last remaining building that was connected with segregated schooling, and it is now used as a county office. Stephen Moore was the principal of the colored high school that was dedicated to colored students in Harford County. The purpose of this school was to give colored students in this area an opportunity to achieve a higher education without the commute to Baltimore city or Delaware, which was the only other school available at the time for high school education. The school was closed in the 1950s after the construction of Havre De Grace and central consolidated schools, which were more easily accessible for colored students.

The school as it stands today 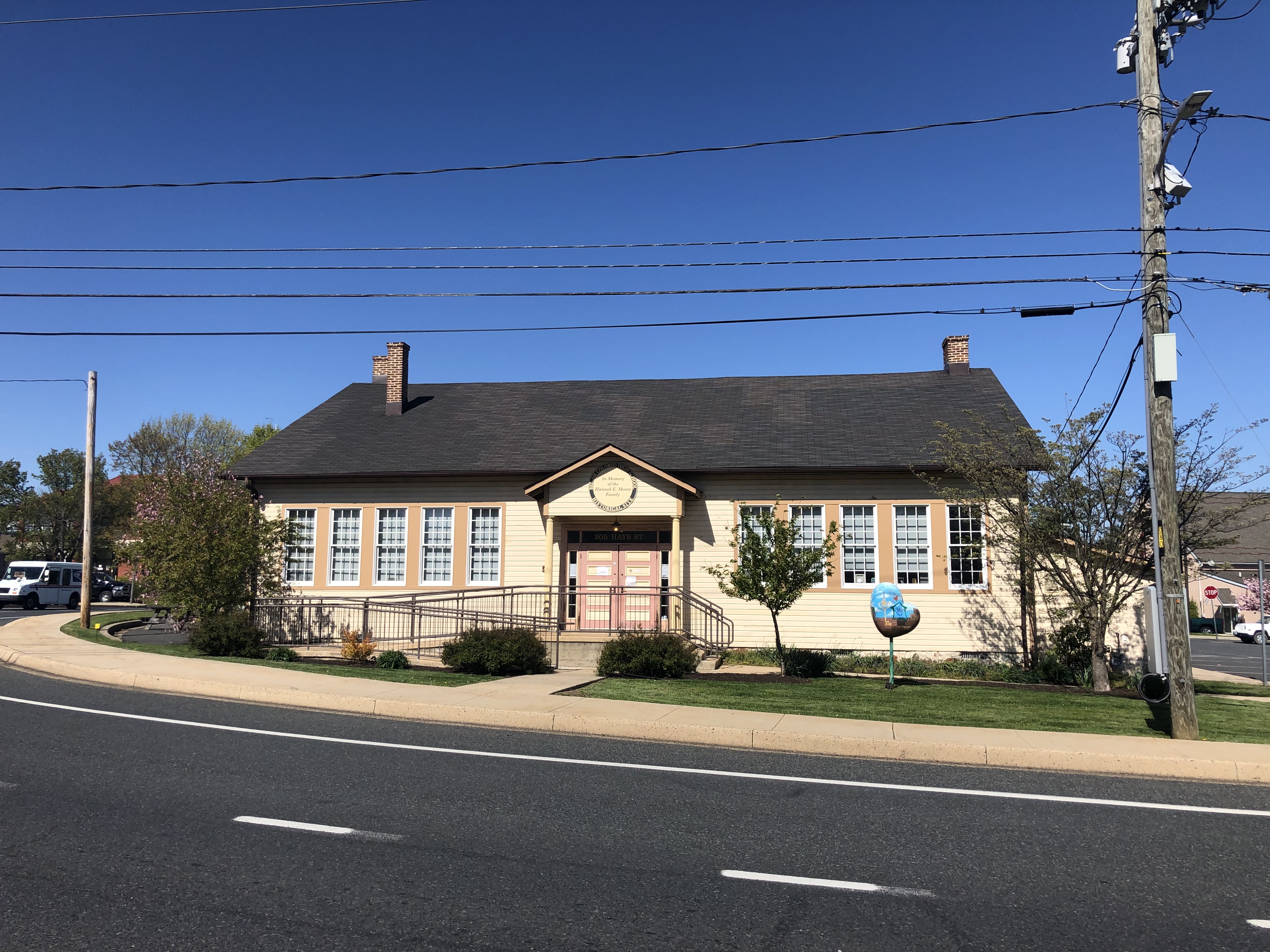 The school from across the street 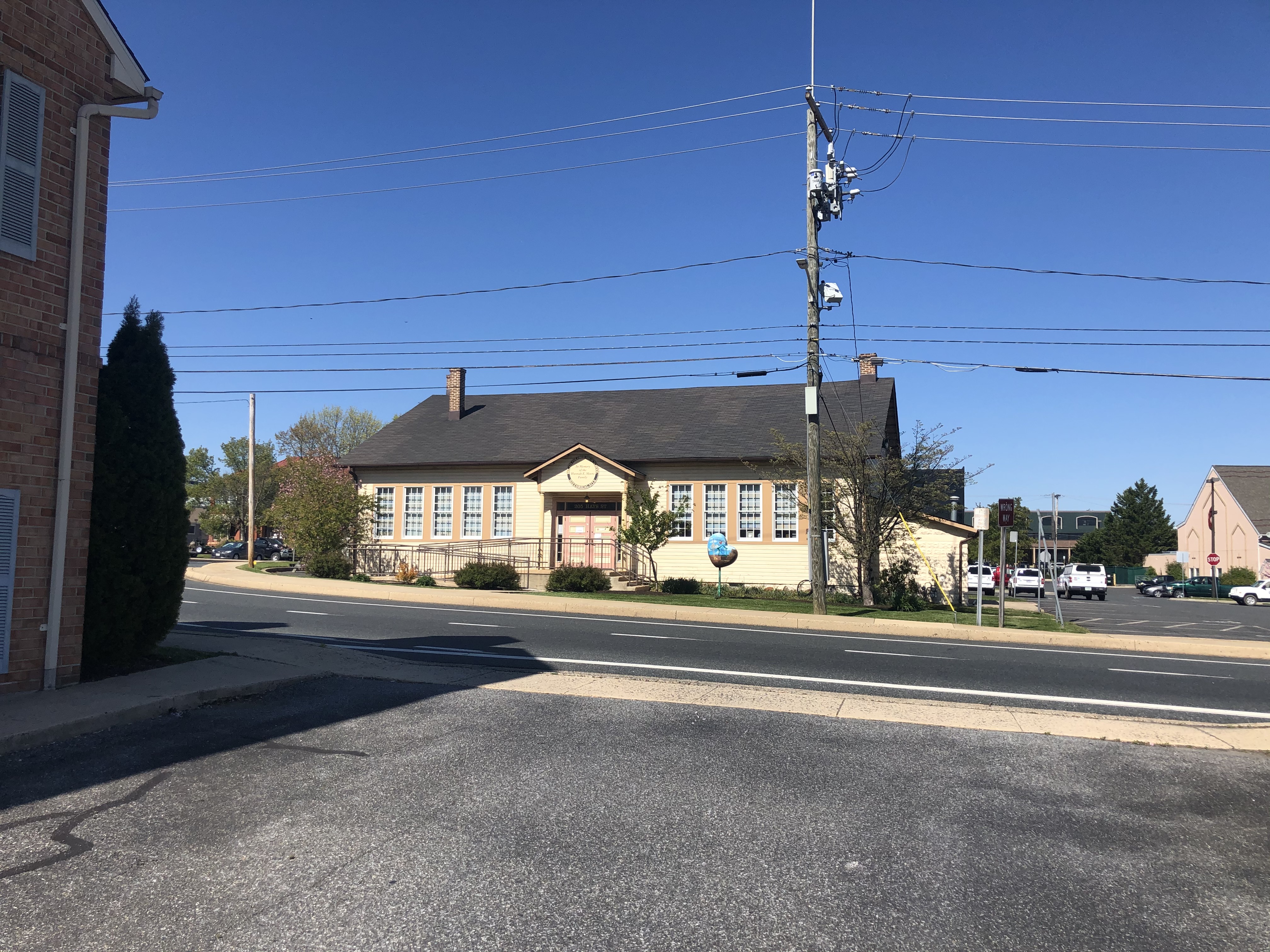 Front of the school circa 1979 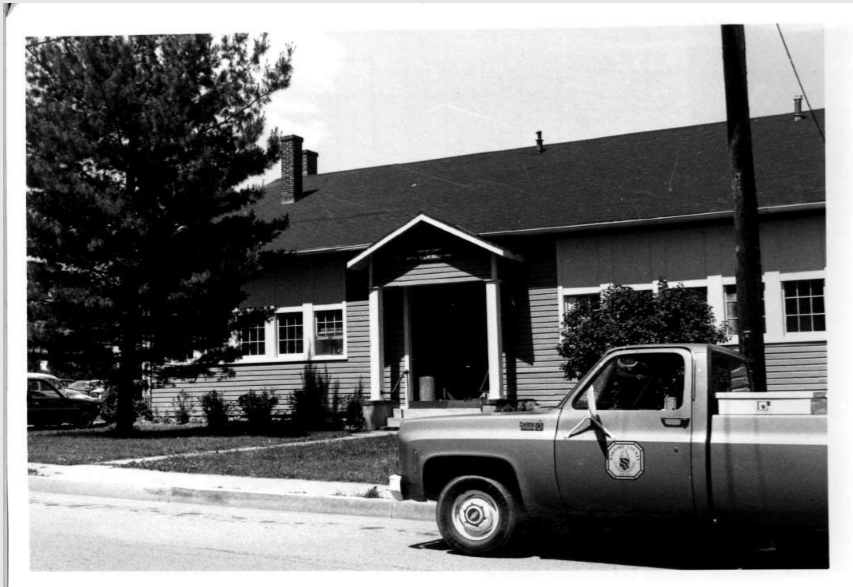 The school from the left circa 1979 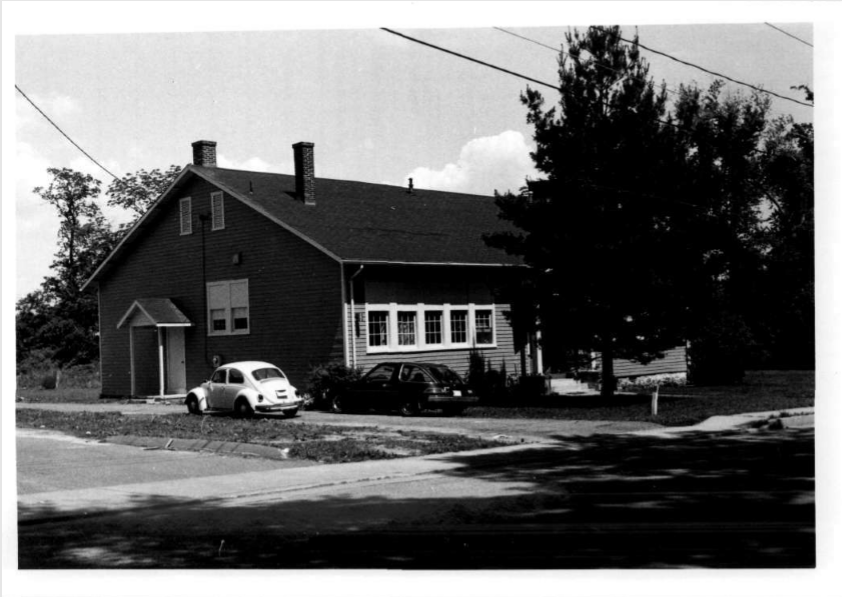 The school from the right circa 1979 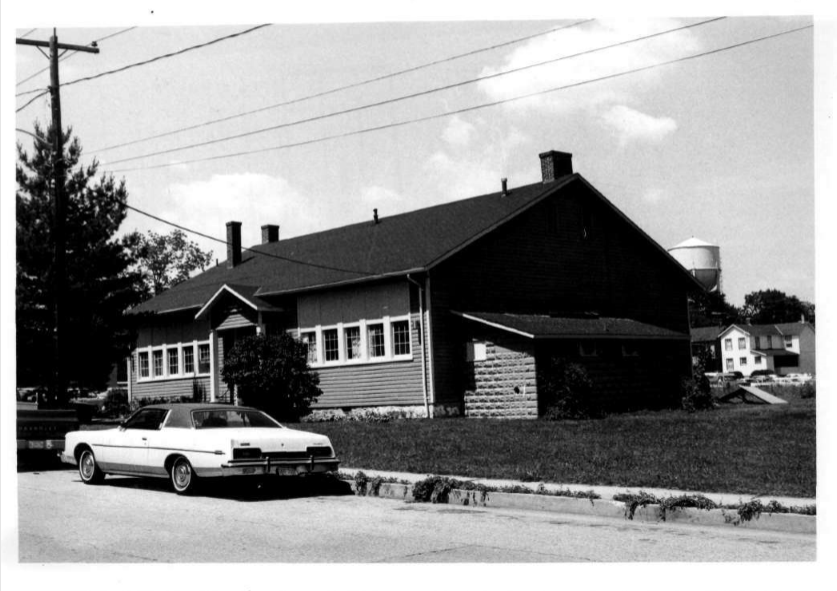 A short backstory on the building of the school itself 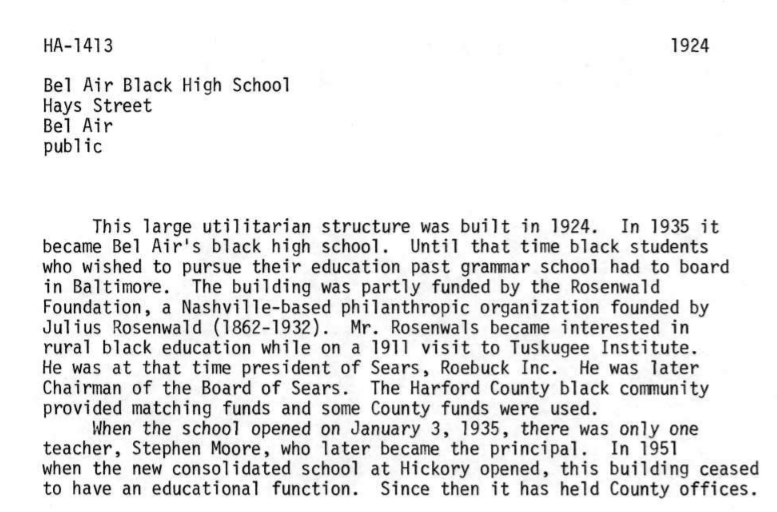 Maryland architectural survey form describing the address of the school 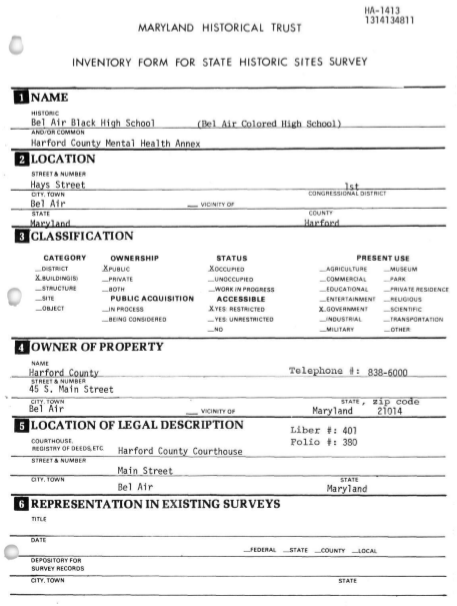 Form from survey describing the materials and construction of the building 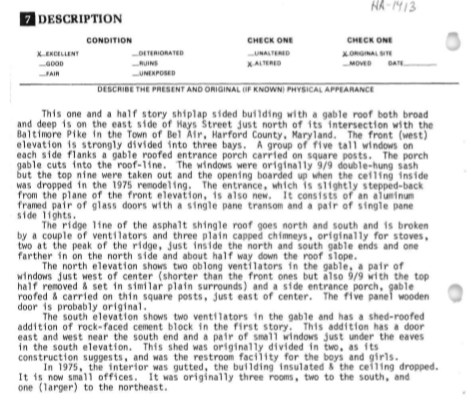 Form from survey describing the significance of the building 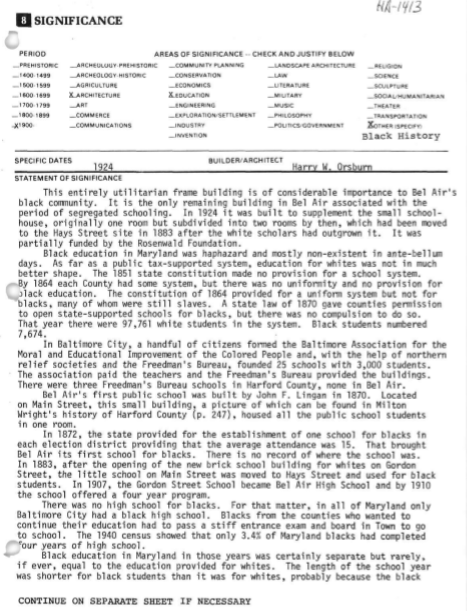 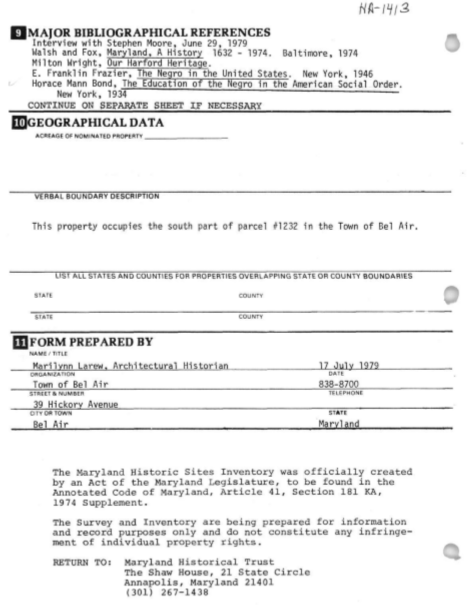 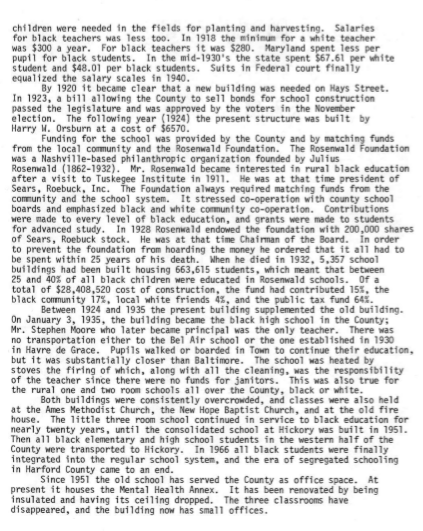 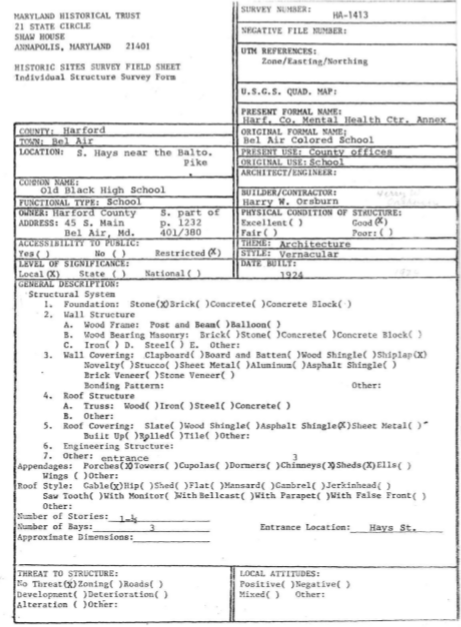 Additional information describing the construction and materials of the school 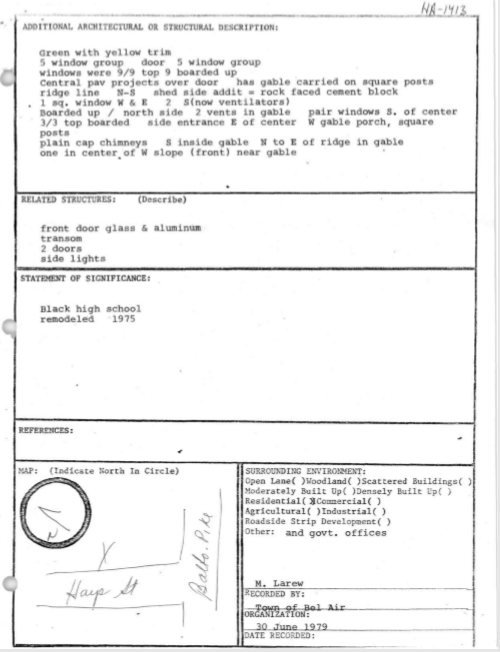 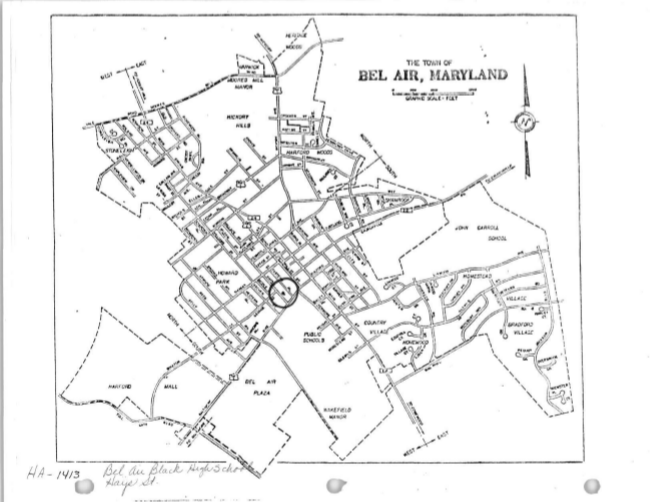 Map showing the location of the school on Hays Street 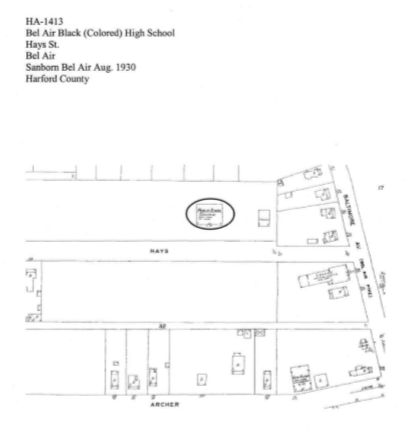 Map showing the location of the school within Harford County 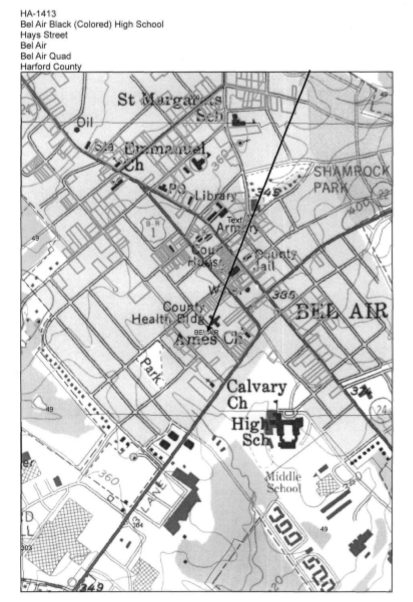 In Maryland, in the 1930s the political climate was very racially-biased when it came to how the politics controlled the education system and leaned more towards the white students for better education, along with having segregated schools for the races. The Political support to the schools in Harford county was very skewed, on average according to Harford County architectural survey file, the state spent $67.61 on their white students and $48.01 on black students. From this, we can see the inequality for the government standpoint in the education system. During the 1930s in America, as a whole, the nation was going through the great depression. This economic downturn caused many in the US with a sharp decline in the economy causing many people to lose jobs. This caused Maryland to put in their first income tax to get money for the education system and for welfare. In the 1930s the NAACP used legal strategies to gain equal pay for black and white teachers in the state of Maryland.

Throughout the 1920s there was a rise of countless social issues such as the women’s suffrage movement. One of the biggest issues surrounds African American citizens. At the time the Bel Air Colored School was built, slavery was newly abolished. But African American citizens were still struggling in everyday life due to the racism and segregation that was still heavily prominent in society. With that, the rise of many racist groups such as the Ku Klux Klan began targeting African Americans and their communities. Many newly freed people weren’t able to get jobs or provide for their families because of discrimination in the workplace. The social conditions at the time of this school being built were very unfortunate. The building of the Bel Air Colored School helped African Americans get established in their new environment to farther their education. A former student Geneva Pope was interviewed by the Baltimore Sun in 1993, "When Geneva Pope attended the old Bel Air Colored High School in the 1940s, she had to read books no longer deemed fit for white students. But she and her classmates first had to erase profanities and racila slurs that white students had left on the tattered pages", Pope also had this to say "in spite of it all we were winners".

During the 1920s, The African American community was heavily discriminated against in many ways, one form of this was an education in Maryland. The education system in Maryland was focused more on their white students and hurt the black students greatly, because of this black students had to travel to different cities to get higher education. In 1924 the structure was built, and in 1935 it became the black high school of Bel-Air. Black people who wanted to follow their education past grammar school had to go to Baltimore and other cities that provided education for minorities. The building was partly funded by the Rosenwald Foundation. When the school opened, there was only one teacher, which was Stephen Moore, who later became the principal. When the Hickory building opened, the Bel Air colored school stopped having an educational function. This building is very important to the black community because it is one of the only buildings in Bel Air that was connected with the period of segregated schooling. Education for whites was not the best as well. The 1851 constitution made no establishment for a school system. There was also no uniformity for black education. The constitution in 1864 wanted a uniform system not for blacks, which were still slaves. In 1870 there was a state law that gave permission to open state-supported schools for blacks, but there was no forcing action to do so. There were then 97,761 white students and black students numbered at 7,674 in the system. Bel Airs’ first public school was then built by John F. Lignan in 1870, it housed all public school students in one room.

During the late 1920s, the United States was hit with a major economic crash leading towards what we know as the great depression. During this time the unemployment rate in the US was 24.9% meaning 1 in 4 Americans were out of jobs. Before the depression hit Baltimore was a highly successful automobile production with record sales. But the depression caused people in those areas to lose jobs than not be able to buy those goods so those businesses declined. With job loss in the city of Baltimore crime increased. To help the poverty situation in Baltimore food stamps were increased to the people to help them provide for their family. But Baltimore started to recover faster than most industrial cities at that time within 1932 having lower unemployment rates than other industrial cities in the US.