Beginning on July 4, 1961, African-American activists, led by local NAACP president Eula Johnson and local physician Dr. Von D. Mizell, started a series of wade-ins on Fort Lauderdale Beaches, which were segregated. On that day, Johnson, Mizell, another Black adult, and four Black college students walked onto Las Olas Beach and towards the water. White beachgoers crowded around them initially but then left them alone. Throughout July and August, other wade-ins took place with many more participants (around 200 in total). The city filed a suit against Johnson and the local chapter of the NAACP on August 12th, claiming that the activists were a public nuisance. The case eventually reached a federal judge the next year who ruled against the city on July 11, 1962. The ruling desegregated the beaches in Broward County and paved the way for the eventual desegregation of other public facilities in the county.

The marker commemorates the 1961 wade-ins that desegregated Broward County beaches. It is located at the end of Las Olas Boulevard. 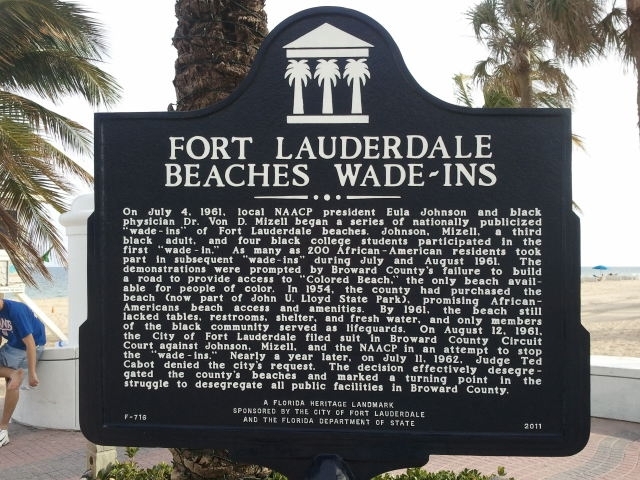 The Fort Lauderdale wade-ins were not the first in Florida; they were happening throughout the state the 1950s (at the time, Blacks could only go to two miles of the state's 2,000 miles beaches). One notable example occurred in 1955 in Sarasota. Local NAACP leader Neil Humphrey Sr. led wade-ins at Lido Beach in September and October of that year. These and other wade-ins garnered national attention and helped set the stage for other forms of civil rights activism throughout the country in the coming years.

In Fort Lauderdale, the struggle to establish beaches (and ones with good facilities) for Black residents began in 1946. In May that year, the Negro Professional and Business Men's League requested the Broward County Commission to open a "public bathing beach for colored people." The commission established a committee to review the issue but nothing happened. The city even tried in 1949 but again the issue was not resolved. No progress was made even after the Fort Lauderdale Hotel Association publicly supported the cause in 1952. Matters got worse in 1953 when a developer bought the only colored beach along the coast (where Galt Ocean Mile is now). In response, the city bought a property in the Everglades but reaching it was only possible by ferry and there were no facilities there.

These developments led to the 1961 wade-ins in Fort Lauderdale. As the wade-ins continued, white onlookers threatened the activists with bottles and bats, and the police warned the activists they could be arrested. The KKK also planned to ambush the wade-in on July 23. However, Johnson learned of the impending attack and told the FBI, who stationed agents on the roofs of nearby buildings and in boats. KKK members came wielding axes but the police prevented them from attacking the activists. Fortunately, no violence ever occurred.

As noted above, the city filed a suit to stop the wade-ins. The NAACP sent lawyers and others to help defend the activists. However, the county circuit judge allowed the wade-ins to continue. The case proceeded in the courts until the federal judge ruled in favor of the activists in July 1962. Full desegregation of beaches (and pools) in Florida did occur until 1964 with the passage of the Civil Rights Act.

The state created the Dr. Von D. Mizzell-Eula Johnson State Park in 1973 to honor the efforts of Johnson and Mizell. The park is located to the south of the marker on the other side of the Stranahan River.