This odd-looking sculpture was created by the artists Claes Oldenburg and Coosje van Bruggen, whose works have been featured around the world. First designed to sit outside of an oil company's headquarters, its path to being displayed in Willard Park was a roundabout one. Today, it is an important landmark in the downtown area. It is considered to be the largest rubber stamp in the world.

Here, you can see the sheer size of the stamp compared to the people in the left-hand corner! 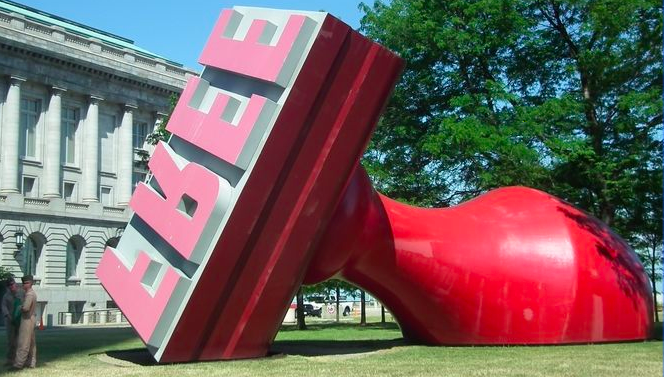 Visitors or those new to the Cleveland area might expect to see some historic buildings, or perhaps a park or two, listed as must-see landmarks. An enormous rubber stamp sculpture labeled 'free' might not be the first thing that comes to mind as a typical tourist attraction, but this piece of art is actually an interesting part of the city's history. It was created by Claes Oldenburg and Coosje van Bruggen, who have made similarly quirky pieces around the world.

In the 1980s, Standard Oil of Ohio commissioned the stamp to be put outside its headquarters in Cleveland, but they were bought by British Petroleum before the sculpture could be completed. The new BP CEO did not want the sculpture, and there are several ideas as to why. One source states that he thought the word 'free' was meant to be a dig at BP, that the stamp was making a statement against the company for their having taken over -and taken the 'freedom' of - Standard Oil. Another is that, as BP originated in the UK, the company is from a culture in which pop art is viewed as more radical; historian Edward J. Olszewski has suggested that the political implications from a BP CEO's perspective of having an enormous rubber stamp sculpture on his front lawn would have been different than they would have been from the perspective of your average American CEO.

Regardless of the reasoning, this enormous rubber stamp was at first rejected by local government as well, who did not want it on display. It was kept in storage until it was finally allowed to stay in Willard park in 1991.

What is the real meaning behind the stamp's design, though? The sculpture's original location was meant to be very near the Soldiers' and Sailors' Monument of Cleveland, and the word 'free' was originally supposed to be pressed against the ground, rather than readable from the side; according to one source, its obscured state was going to represent the fact that, despite the progress made since the Civil War, many people in the modern world are not really free.