The name "Carmine's," which now refers to this former service station, originally applied to a restaurant located elsewhere on Wood Avenue in downtown Big Stone Gap. This Gulf station turned diner was founded by Carmine Murphy in the late 1930s. Murphy opened her restaurant beside her husband’s in-town theatre that projected films on the back of a barn in the middle of town. The restaurant operated until 1982 and the building was demolished soon after. When author and director Adriana Trigiani chose to produce a film version of her bestselling novel Big Stone Gap in its namesake town, she used this service station as the set for Carmine’s restaurant. This building now operates as the Big Stone Gap Visitor’s Center and is owned and operated by the Town of Big Stone Gap. 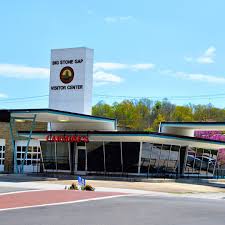 When Carmine (Jeffers) Murphy opened her restaurant beside her husband’s in-town movie theater sometime around 1940, the restaurant consisted of one booth and three bar stools. Visitors would pay for their tickets, drive through the barn housing the animals, continue behind the barn, and watch the film on the back of the barn. They would then be able to visit Carmine’s restaurant. The family and their son, future Big Stone Gap Town Manager Pat Murphy, lived above the restaurant while they developed it into a fixture of the town. Carmine's became known as a teenager hangout and celebrated for its homemade lunch entrees and pies. It also housed original art on the diner walls.

Soon after the closing of the restaurant in 1982, the original brick building was demolished. In 2013, author Adriana Trigiani chose to direct and film the movie adaptation of her novel Big Stone Gap in her hometown. Trigiani recreated the Carmine’s restaurant she knew from her childhood by recreating the old restaurant, but this time in a service station located in the center of Big Stone Gap. The production crew used the replica of Carmine’s as a set to film several scenes and to promote the film, prompting town officials to decide to continue using the building to host local events and operate as the town’s visitor’s center.

Created by Dylan Thomas Mabe (Instructed by Jinny Turman, University of Virginia's College at Wise) on May 4th 2020, 7:01:15 pm.