Established in the 1850s, the Fly Creek Cider Mill is a popular attraction outside of Cooperstown, New York. The mill that originally produced hard cider, a staple in the times before refrigeration, has grown into an educational center and shop where visitors can see the mill, and in autumn months witness production. Its original orchards were planted by the infamous “Johnny Appleseed,” and it was not long after the mill’s 1950s closing that it was restored to be used for the same purposes with a once again booming business. 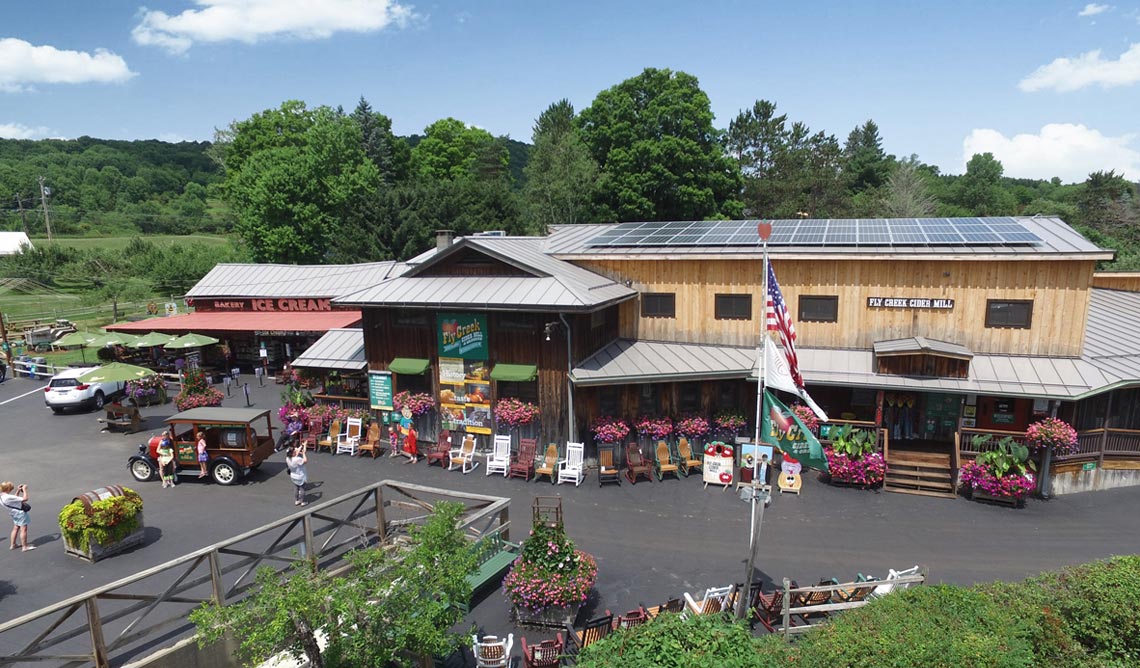 Located just outside of Cooperstown, Fly Creek was named by Dutch traders in the 1700s when the area referred to as “vlie” became “fly.” After the Revolutionary War, a small village formed around the creek in Otsego County, and the creek became the perfect place to establish mills due to the water flow. At the height of business there were eight different mills in the area, but today the only one that remains is the Cider Mill. Originally, John Chapman, more commonly known as “Johnny Appleseed,” planted the seeds that created the orchards at the Fly Creek Cider Mill and Orchard before settlers arrived. Chapman was known for traveling on foot and spending the majority of his life outside as he traveled west to sow seeds for cider apples for thirsty pioneers. When settlers arrived, they developed those apples to be fermented into a hard cider and wines. Then, in 1856, Hosea Williams built a cider mill to turn them into sweet cider, using a turbine with the power of Fly Creek to run a grinder and water-hydraulic press.

Settlers eventually abandoned their hand presses to use the new mill, turning the sweet cider into hard cider each with their own secrets in root cellars they used for fermentation. Williams then built a woodworking shop with a turbine-powered wood lathe, jigsaw, and planer to keep the mill operational all year long. He used wood shavings to store and sell ice, and soon added a grist mill for corn and wheat before the rest of the now-closed mills offering different services appeared in the area. A second owner, Linn Kane, used a two-cylinder gas engine to run the grinder during dry periods, but the mill fell on hard times during the prohibition when production of alcohol was outlawed. While woodworking continued, the mill did not recover and was closed in the 1950s, after all the others, as production of beer overtook cider as a cheaper option.

In 1962, Charlie and Barbara Michaels bought the property to transform into a house. After hearing stories from Kane of a once-booming business, they made the decision to restore the mill instead. Charlie began planting the orchard while Barbara started selling her artwork and a variety of foods such as apple bread and molasses crinkles. As sales increased, space expanded, and the location was marketed as a fall family attraction with entertainment, food, and sweet cider. When the Michaels could no longer run the business in 1999, their son, Bill, and daughter-in-law, Brenda, purchased the property and expanded it into summer months. They grew the restaurant and bakery, adding specialty foods and having festivals, as well as exhibits throughout the mill.

The mill once again began offering hard cider and wine, becoming part of the New York State Farm Winery in 2002. The mill was completely renovated in 2016. Then, its 161st year was celebrated with the publication of Fly Creek Cider Mill Cookbook by Agate/Surrey Books. Now, it is an open tourist attraction, with features such as a vintage John Deere tractor exhibit, a Millpond boardwalk, a Tractorland playground for children, and events that feature over 40 foods such as house-made fudge and mill-aged cheese.