The Mountaineer Military Museum is a museum that was dedicated to servicemen of past and present during the Vietnam War. The owner is Ron McVaney and his friends were drafted during the Vietnam War. Two of his friends were sent to Vietnam and he was sent to Germany. The location of the Museum was formally called the Weston Colored School. The building was built in 1882 and was erected with public funds for black children in WV. After 1954, when desegregation occurred the building was used for numerous activities. However, in 2006 it became home to the Mountaineer Military Museum. The Museum started in Harrison County several years before, was then moved to Upshur County and finally housed in Lewis County to allow for expansion of the many items collected over the years. 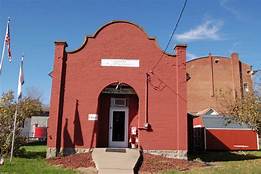 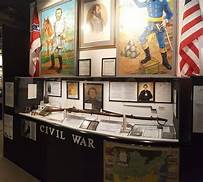 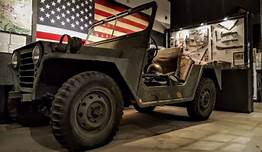 When arriving at the museum, you will find the U.S. flag, WV flag, and flags from all branches of the military flying high. Several memorials are placed throughout the grounds including a granite monument dedicated to Lewis County casualties of the Vietnam War. The monument shows pictures of each service member and the branch of service they were from. As you enter the museum, the tour guide tells how the museum was started and points you in the direction of the display dedicated to the owner’s best friends which details their story. Throughout the entire museum, are eight by ten framed pictures of West Virginia Servicemen from all branches of the military from past to present. Anyone wishing to include a family member from West Virginia or with family ties to West Virginia may bring in a picture to be displayed.

The pictures are color coded by counties to make it easier to find loved ones and friends. As you continue through the museum you will find artifacts ranging from uniforms, pictures, personal items, weapons, bombs, parts of planes, etc. There are specific displays from each war, and several have been donated by servicemen with their picture reflecting their years of service and any medals they may have received. While one can find an abundance of history, artifacts and displays some of the most memorable is a tattered U.S. Ensign flag with a special arrangement of the stars hanging on a wall from 1861.

According to the tour guide, the flag was flown during battle and hit by a cannon causing the rips and tears. Another display to catch your attention is on the Korean War. This display is rather large and has several mannequins dressed in uniforms worn during the Korean war sitting outside in the snow. The display states that temperatures were often 32 degrees below zero and the men were ordered not to build fires. Many suffered from frostbite. A few steps away and you will find a full sized 1961 jeep used in Vietnam.

There is an actual army helmet and visitors are permitted to take pictures and sit in the jeep. Another display was donated and made by veteran that served in Vietnam. That veteran built a large model reflecting the job he had while in Vietnam. This piece was part of a therapy project for the veteran as he suffers from PTSD.

Another display that is popular according to the tour guide is the reflection room. When you enter this area, there is a bench with lowlights inside a tiny room. The walls are covered with photos of the Vietnam war and a tv plays an informational DVD on the Vietnam war. There is also music of that era playing in the background. The tour guide stated that many veterans go in this room and sit quietly to reflect on their memories and what they have gone through during times of war. She stated that this was added to the museum in hopes of helping with the healing process. While there are several displays on the Vietnam war, there are many others covered throughout the museum. For example, another large display includes history on Franklin Roosevelt’s fireside chats. This display actually plays one of the chats where Roosevelt is explaining the banking crisis and the government’s response. These fireside chats were from 1933-1944.

There are several sections of the museum that are also dedicated to specific veterans and not just general information or collected artifacts. There are several sections dedicated to West Virginia history during the Civil War. For example, there is a display for Lt. General Thomas Mailey Harris which Harrisville, WV is named after. He practiced medicine, commanded the 10th West Virginia Infantry, protected General Grants flank at Appomattox. He also served as a member of the Court Marshall Board that tried the accused conspirators of the assassination of President Abraham Lincoln. Stonewall Jackson is also included in this section with reference to the importance he played in the Civil war as well as the history of Lewis County.