The Roberts Hotel is a six-story steel-framed building covered in brick with Indiana limestone details. The hotel building was constructed in 1921 in a Colonial Revival style with 200 rooms and is named for George Roberts. The basement and lower levels are square in plan while the upper floor are ell-shaped, fronting High and Howard Streets on the west and south sides, respectively. When the building was nominated to the National Register in 1982, the hotel lobby and first floor and main dining room were contributing elements. The hotel closed in 1972 but reopened in 1976. The Roberts Hotel was converted into apartments in the 2010s and is now known as the Lofts at Roberts.

Front and west sides of Roberts Hotel in 1982 (nyttend) 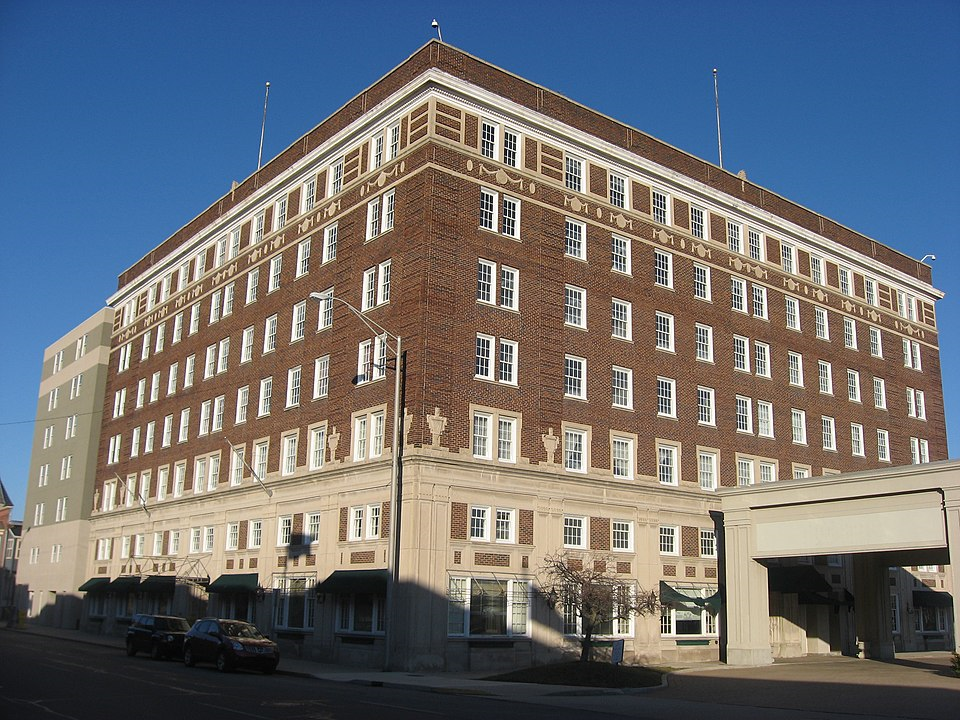 The Roberts Hotel was designed by Charles W. Nicol, an architect from Lafayette, Indiana, and built by an Illinois firm, A.W. Stoolman of Champaign. The hotel opened in February of 1921. The building occupies part of land that was Seitz's Addition to the city. The Roberts Hotel was designed to be luxurious and to impress; it has been called the "crown jewel of Muncie." The two lobby was partially lit by nine skylights and had terrazzo tile floors, and walls featuring elaborate plasterwork. The main dining room, or the Georgian Room, occupied the northwest corner of the structure. It too retained its fancy plasterwork on its walls with columns and pilasters decorated with acanthus leaf details. Plaster rosette medallions on the ceiling added to the room's detailing.

George D. Roberts was born in Russia but moved to the United States at age 30 with his wife and young daughter. He later moved to Muncie in 1908 and was involved in oil development across four states, plus real estate ventures. He organized the Muncie Hotel Corporation with himself as president in 1919. Once the hotel opened in 1921, it was run by the same men under the name Muncie Hotel Operating Company. Roberts married Sarah Plost in Russia in 1899; their second through fourth children were born in Indiana.

The Roberts Hotel was the tallest building in downtown Muncie and the city's only hotel when it was nominated to the NRHP in 1982. The hotel was found to be significant for its architecture and as its former role as Muncie's most gracious and famous hotel in the city's prosperous era of the 1920s to 1960s.The structure lies within the Walnut Street Historic District.

A developer named Peter Dvorak purchased the Roberts Hotel in 2004 and closed the hotel in 2006. Dvorak announced plans in 2009 to convert the building into luxury apartments. Although the work had begun, Dvorak stopped the project due to the financial climate. The hotel went onto the auction block in 2010 under court order. Bundled with the hotel were the furnishings, restaurant equipment, a grand piano, an antique dining table, china cabinets, and rugs.

The building has been transformed into the Lofts at Roberts, featuring one- or two-bedroom apartments for rent by adults age 55 and up who don't exceed certain income levels. The Lofts offers community rooms on each floor, a 24-hour fitness center, and an on-site movie theater. Rents begin at around $500 per month and go up to nearly $800.