Muncie is the county seat of Delaware County. The Delaware County Historical Society's headquarters are on East Washington Street. Their resource center and library are open Tuesday to Friday 12p to 4p and by appointment. Their members give talks on a number of topics of local interest to groups. DCHS also maintains the Moore-Youse Home Museum next door, in a circa 1860 wood frame house that was owned by one family for 118 years. One of the oldest standing structures in Muncie, the Moore-Youse Home was listed in the National Register in 1984.

2012 photograph of front and west side of Moore-Youse Home, a house museum of DCHS (Nyttend) 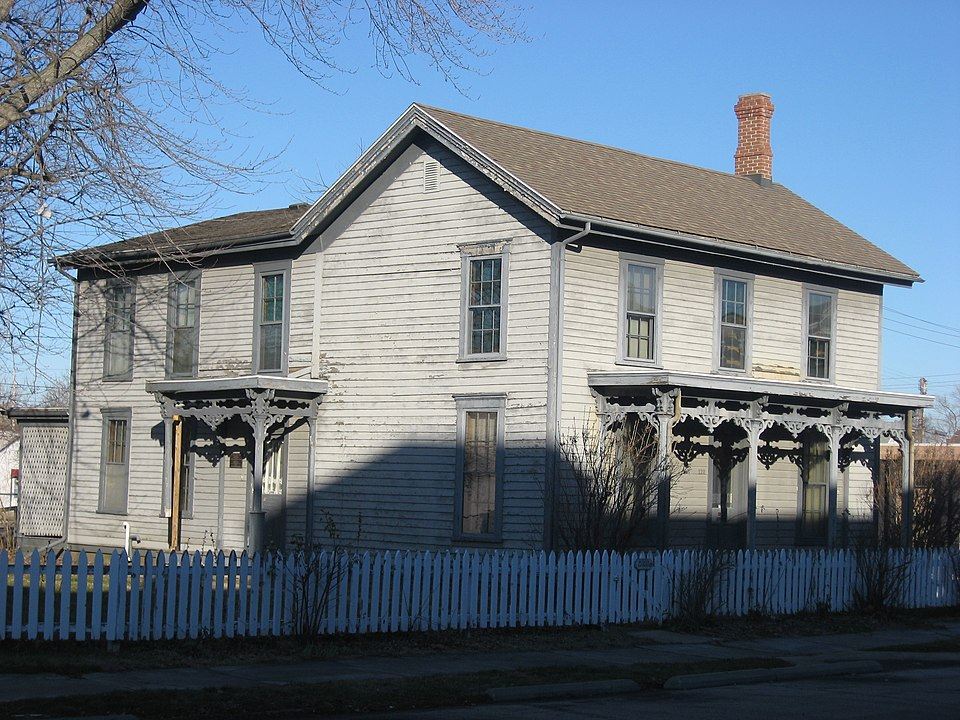 The Delaware County Historical Society was founded in 1927. The historical society aims to foster a deeper appreciation of local history and culture through advocacy, education, interpretation, stewardship, and service. Memberships in the DCHS cost $20 for individuals and $30 for families.

The Pioneer Cemetery Committee is a group of volunteers who maintain the older cemeteries in Delaware County, including family cemeteries and abandoned cemeteries. The group meets at the DCHS building the third Thursday of the month at 6:30pm. Workdays are usually on Saturday mornings, for cleaning and repairing markers of pioneer settlers. The society's Ancestor Hunters specialize in genealogical research on former county residents.

Members of the historical society are available to give talks to groups about county historical topics. They have presented talks for non-profits, classrooms, and civic organizations. One talk is on the history of beer in Muncie; two breweries operated in the 1870s and 1880s; a third opened in 1904 and closed in 1912. Two are in business in Muncie now. Another presentation is about Native Americans in Muncie.

The DCHS operates the Moore-Youse Home Museum just east of the DCHS office/library, behind the white picket fence. Also known as the Moore-Youse-Maxon House, the original part of the house was constructed around 1860. The same family owned the home from 1864 to 1982! The front porch is a later addition and was rebuilt in the late twentieth century. The building is clad in narrow clapboard, painted grey with white trim. The gable roofs are now covered with asphalt shingles. The rear addition to the structure with a new side entrance was built by 1883. The red brick chimney is not original. Outbuildings that formerly stood on the double lot, including stables, no longer are extant.

Samuel P. Wilson purchased the two lots in 1864 and soon sold them to his daughter, Clara Jane Moore and her husband, Charles Wesley Moore, an attorney. Their daughter, Mary E. Moore Youse, inherited the home in 1904. The next owner, Mary Youse, married a local industrialist named John J. Maxon. Mary Youse Maxon lived in the home until her death in 1982. She bequeathed the house on two lots with a small endowment to the DCHS for use as a historical museum. The house is part of the Walnut Street Historic District and was listed on the National Register of Historic Places in 1984. It stands on land added to Muncie as Gilbert's Addition of 1827. The house represents the only remaining residential structure in the commercial center of the city from the early phase of settlement of the town.

DCHS Library: Tuesday to Friday 12p to 4p and by appointment