Dedicated in 1929, this statue recognizes the work of Dr. James Marion Sims (1813-1883). Sims is commonly referred to as the “father of modern gynecology" and is renowned for applying the silver suture for the treatment of vesicovaginal fistula. In addition, he invented the Sims speculum, identified the Sims position, developed a treatment for infant lock-jaw, established the New York Women’s Hospital, and contributed to numerous publications, most notably “Clinical Notes on Uterine Surgery.” However, much of Dr. Sims’s pioneering work resulted from experimentation on enslaved women, and some of his methods were morally compromised. In recent decades the interpretation of Sims’s achievements have focussed on the suffering of enslaved women and ethical questions about Sims and his methods. The controversy has complicated Sims’s commemoration: protesters have demonstrated at multiple Sims monuments, including the one in South Carolina. This South Carolina protest, held in 2017, was called MEND, named for a book of poetry that gives voice to women in Sims’s story. When remembering Dr. James Marion Sims, one must decide whether the brutality overshadows the innovation. 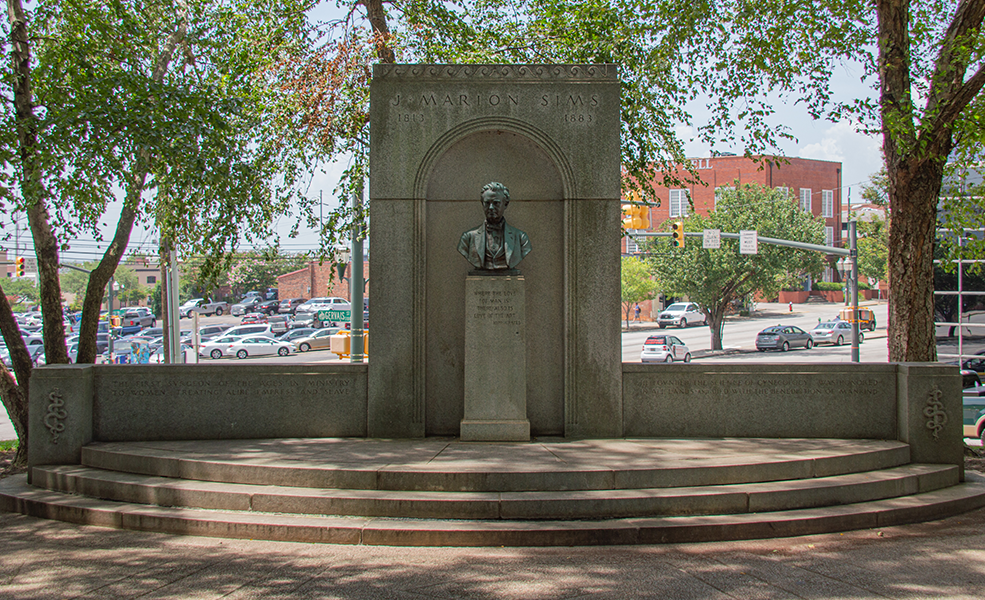 Painting by Robert Thom. The woman on the table is Dr Sims’s patient Anarcha who received 30 operations over Sims’s 4 years of fistula experimentation. Dr Sims is the man in front of Anarcha, and the other two men are other doctors observing the procedure. The two women in the background are other enslaved experimental subjects. 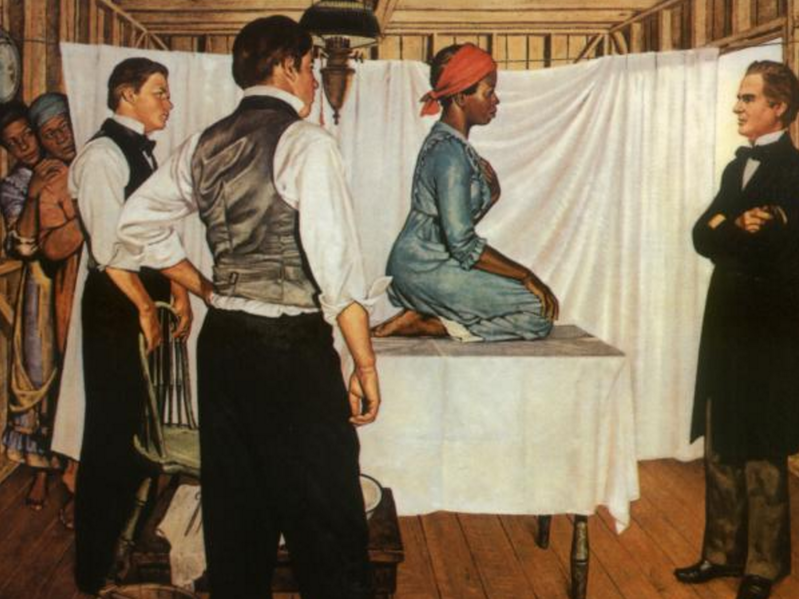 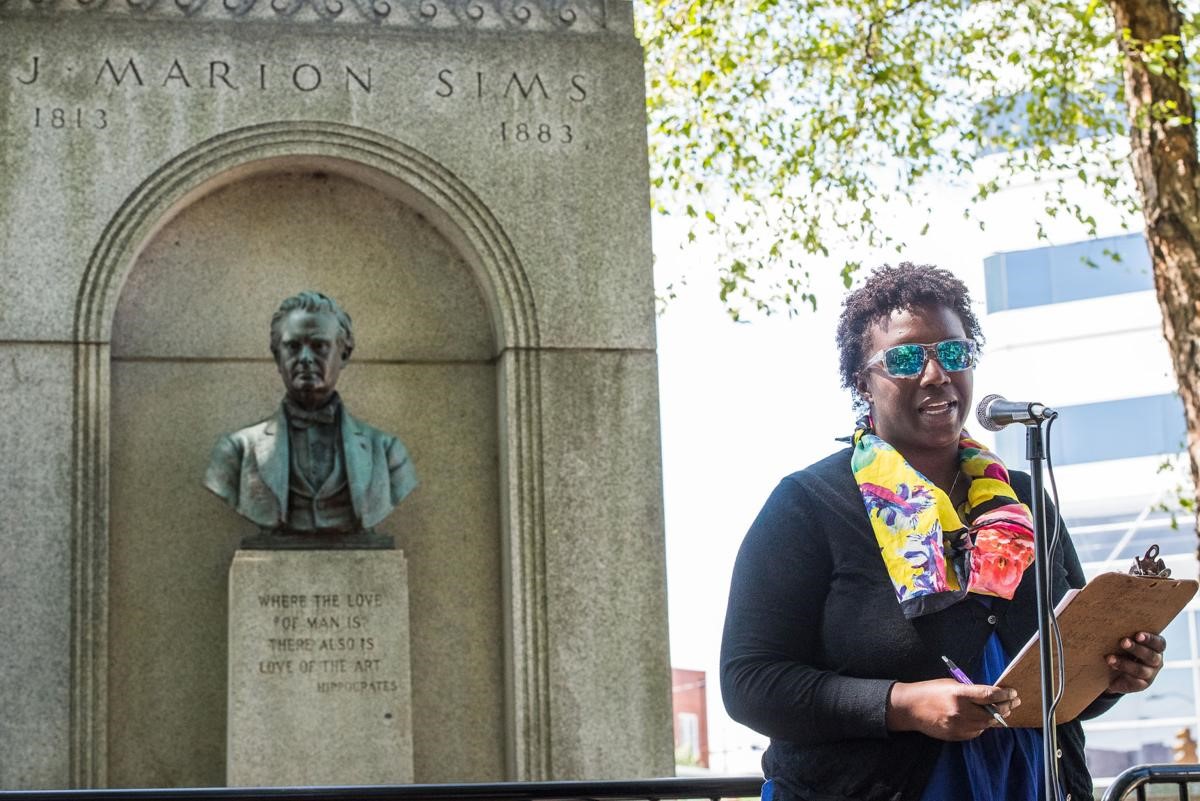 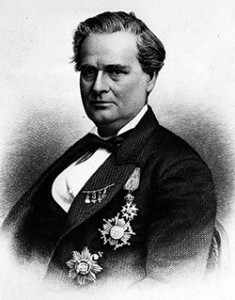 “The first surgeon of the ages in ministry of women, treating alike empress and slave.” These words are inscribed on the low wall to the right of Sims’s bust at the South Carolina memorial. While these words have not changed, the historical interpretation of Sims and his work has. While acknowledging that Sims was a path-breaking physician, his methods, which included the experimentation on enslaved women have dominated recent interpretations of his work.

The monument is located on the State Capitol grounds in Columbia, South Carolina, north of the John C. Calhoun State Office building. The South Carolina Medical Association proposed the statue in 1912 but struggled to obtain funding. Efforts to create this monument languished for a decade until 1926, when the Medical Association Women’s Auxiliary revived the idea and steered the project to completion. Sims’s statue was erected in May of 1929.

The statue was originally displayed on the University of South Carolina campus before being moved to the capitol site. Here it still stands, despite being the subject of recent controversy in Columbia, controversy which resulted in the poetry marathon MEND in 2017, a peaceful protest of the Sims story. Kwoya Fagin Maples, author of the poetry collection, MEND, and co-organizer of the marathon, collaborated with students and other citizens to use literature to remember the suffering of enslaved women who were victims of Sims’s experiments.

James Marion Sims, son of John Sims and Mahala Mackey Sims, was born in Lancaster, South Carolina in 1813. After a relatively typical childhood in a slave-owning Southern family, Sims entered medical school in 1833 despite his father’s reservations; John Sims considered medical doctors quacks and pill-pushers. Sims’s early medical interests did not include gynecology. In fact, for the first decade of his career, he shied away from female organs, referring patients with gynecological conditions to other physicians whenever possible. When Sims began his practice, the social climate was still hesitant in its acceptance of male doctors operating on female matters. The field of gynecology—the name an important distinction from midwifery due to its more extensive use of tools, medical apparatuses, and complete domination by males--was in its infancy. In fact, some of the early progress in gynecology can be traced to slaveowners’ increasing interest in female slave reproductive health. Congress had recently banned import of slaves from Africa, so the continuation of slavery rested on the stellar reproductive levels of American-born enslaved women.

Despite his reservations about operating on women, Sims was still enlisted to help with birthing occasionally and by chance was called in quick succession by three different slave owners to treat enslaved mothers’ postpartum vesicovaginal fistulas. Vesicovaginal fistulas are holes that form between the bladder and the vagina as a result of difficult labor. These fistulas cause incontinence, severe pain, and social discrimination due to the lack of bladder control and ensuing odor. Sims’s initial attempts to cure the fistulas were unsuccessful. Soon thereafter, he was resituating a dislocated uterus in a woman who had fallen from a horse when he accidentally discovered a novel position in which to view the entirety of the vagina. This “Sims position” enabled him to observe the fistula with the help of a pewter spoon (which would later become his famous speculum). Over the next four years, he operated extensively on twelve enslaved patients. One unfortunate woman underwent thirty operations. Finally, through the use of his silver suture, Sims perfected the art of mending vesicovaginal fistulas. His reputation grew after his relocation to New York where he founded the Women’s hospital. He also developed an international reputation and influenced European medicine. Sims’s contributions to the field are undeniable.

The controversy over Sims’s story did not begin until decades after his death. For many years, Sims was universally lauded as a medical hero. However, in the later 20th century, as the rationale of the Civil Rights movement set in, historians and journalists began to question his practices. Medical textbooks have yet to acknowledge the controversy in their content. The first major exposure of Sims’s controversy came in a 1976 book entitled The Horrors of the Half-Known by historian G.J Barker-Benfield. This book complicated Sims’s story, spurring questioning and complaints that have continued since. Complaints centered around issues of consent, the absence of anesthesia, and even an accusation of sexual misconduct. First, the issue of consent will be discussed. Sims claimed that his enslaved subjects were content with his treatments. In his memoir, The Story of My Life, he boasted that “My patients are all perfectly satisfied with what I am doing for them.” However, it is not credible that he received their true consent. He contracted with their owners to borrow them for experiment, and he was well aware of the advantages of this strategy, saying “There was never a time that I could not, at any day, have had a subject for operation.” In addition, the women were made to continue slave duties for Sims in periods between surgeries, and they were surgical assistants to his procedures, sometimes while still recovering from their own operations. Second, in terms of anesthesia, Sims had none. He provided opioids for post-surgical pain relief. However, he did not believe in surgical anesthesia at the time, as it was still in its beginning stages, so he opted to complete surgeries as quickly as possible, undoubtedly requiring more strain on his enslaved surgical team. Especially due to his later use of anesthesia on white, affluent women, many believe that Sims forsook anesthesia due to a belief that African Americans had high pain tolerance, a belief that was commonly held during Sims’s era. His true stance on this matter is unclear. Finally, the third allegation is potentially the most damaging. In Medical Bondage: Race, Gender, and the Origins of American Gynecology, author and history professor Deirdre Cooper Owens speculates that Sims assaulted his patients, fathering “mulatto” children, perhaps in order to reopen postpartum fistulas so he could continue research.

Defenders of Sims explain him as a product of his time, and it is true that countless other surgeons experimented on enslaved women. Nevertheless, multiple protests of Sims monuments have occurred in recent years, including at the locations in Alabama and New York. In fact, the monument in New York was recently removed from Central Park and is in the process of being moved to a cemetery due to determined protest by New York residents. In contrast, a 2017 protest at the South Carolina site proposed an addition to the monument rather than a removal. The protest was a poetry marathon entitled MEND, named after a book of poetry by Kwoya Fagin Maples that gives voices to the three original fistula subjects named in Sims’s story: Anarcha, Betsy, and Lucy. Protestors advocated for additional statues depicting these three women, acknowledging their contributions and great sacrifice.

Ultimately, Sims’s story is complicated. Perhaps he was a monster. Perhaps he was just following the experimental tendencies of his time. Regardless, these women endured terrible things. Their voices deserve to be heard. This poem from MEND, told from the point of view of Anarcha, one of Sims’s first experimental subjects, is an imaginary address to Sims himself.

“You pull out the notes from your leather bag,

Reading and murmuring through surgeries—

Failures, the almosts bore against our backs.

Every note marked becomes the symphony

You compose, and yes, we will render it.

We are rotting fruit, yet our bodies

Pearson Museum at the Southern Illinois University School of Medicine

Bulletin of the American College of Surgeons