This memorial plaque was dedicated in 2015 and commemorates the life of Michael Brown Jr., who was fatally shot by police officer Darren Wilson on the streets of Ferguson, Missouri, the year before. After the shooting, a grand jury chose not to indict Wilson for his relation to the shooting. Following this event, a nationwide movement for racial equality ensued with a focus surrounding the criminal justice system. With the nation at arms, the family of the late Michael Brown Jr. worked to gather memories of their loved one which reminded others of his life and humanity rather than the tragic end. In the years since his death, there have been many temporary memorials and celebrations, as well as one permanent marker of Brown's life. Though this movement continues to push for equality, Michael Brown's family urges the country to see him as the person he was instead of remembering him as the victim of inequality that fills the nation.

This photo taken of Michael Brown Jr. depicts him in his graduation cap and gown. This photo was chosen to put on his permanent plaque. It depicts his strength and dignity through his education and his hopes for the future. 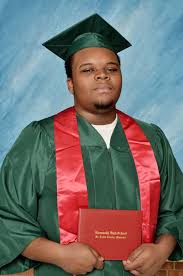 In this photo is the plaque that lies on the sidewalks of Canfield Drive in Ferguson, Missouri. It was written by his family members with the hope that readers understand Michael's importance in life, rather than his importance in death. 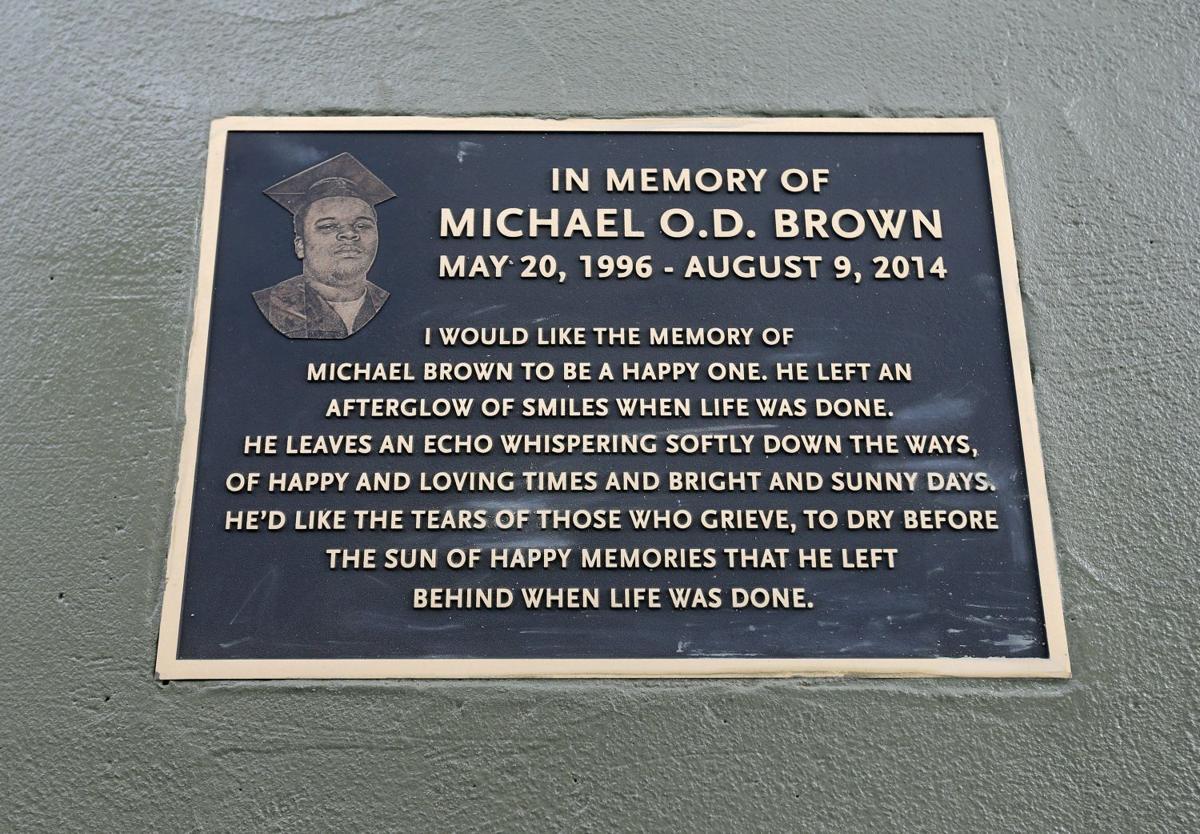 In the street where Michael Brown Jr. was fatally shot, passersby have left tokens of remembrance. This photo depicts stuffed toys and flowers which are often left to remind others that Michael was still a child at his death. 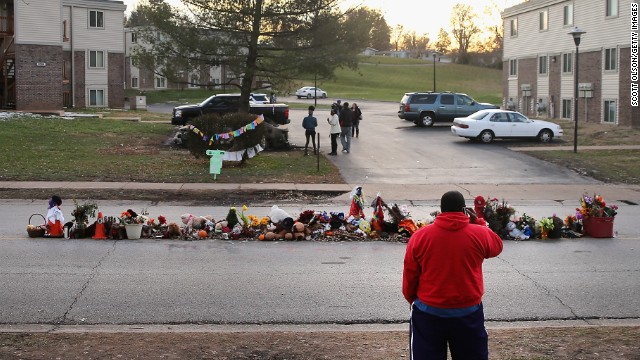 At the art exhibit, a cousin of Michael Brown Jr. writes a note to him. It depicts her wish of meeting him, and it is left with other artifacts that had meaning to Michael during his life. 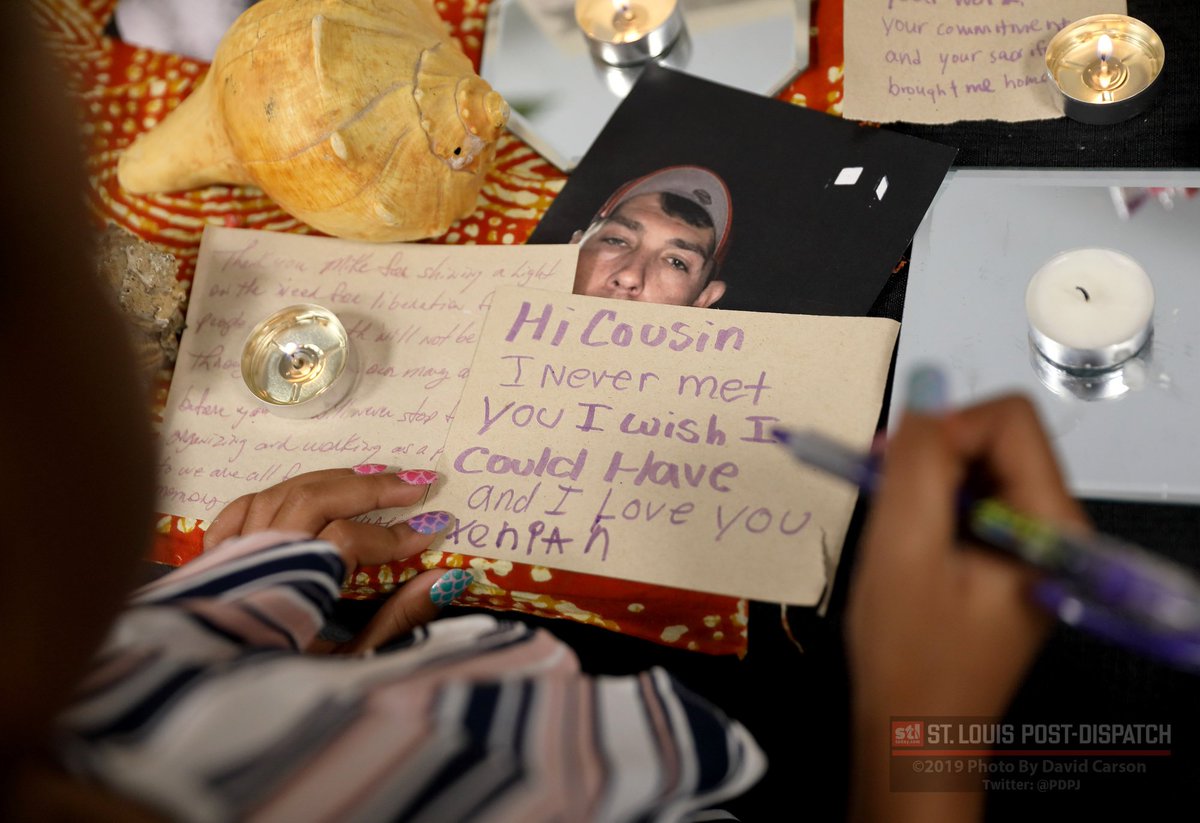 The art exhibit contains items found in Michael Brown's bedroom on the day of his death. These were added to the exhibit to show how Michael was a teenage boy who enjoyed drinking soda, eating skittles, and listening to music. 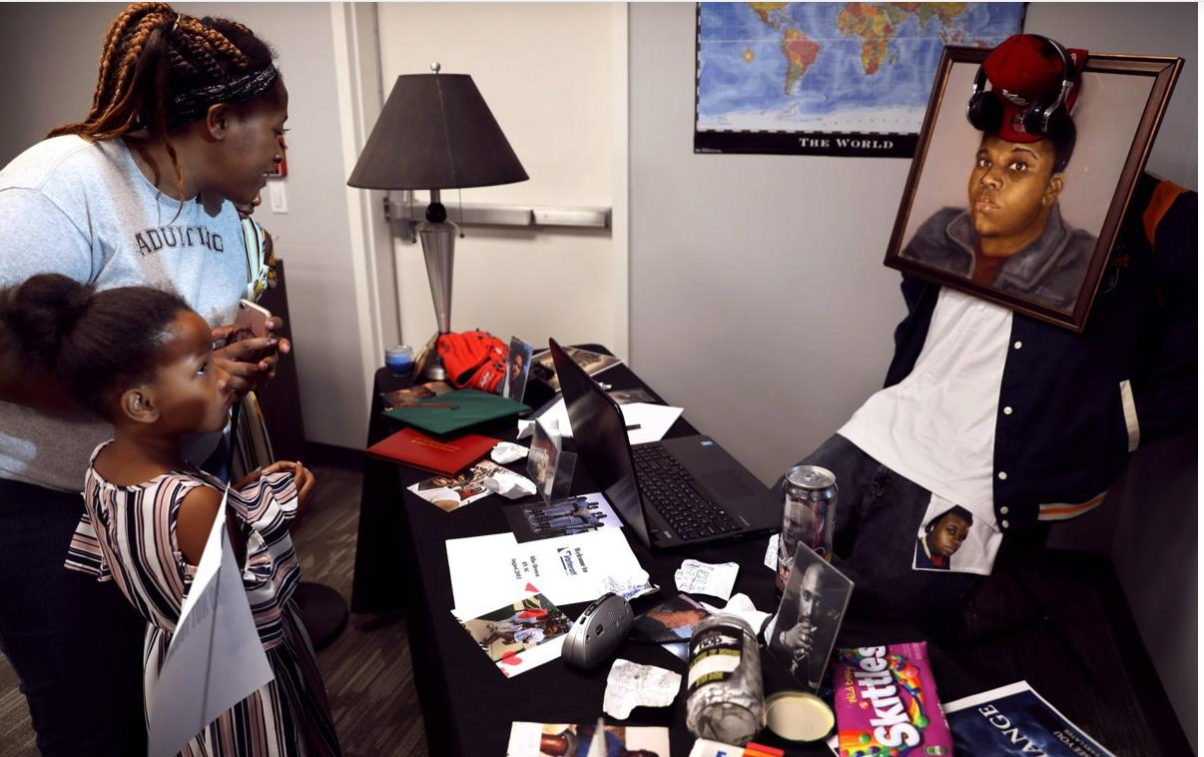 On the fifth-year anniversary of Michael Brown’s death, an art exhibit was put together by Michael’s mother and local artists and activists as another form of memorial. The art exhibit was held as a walk-through demonstration only for the weekend following the fifth anniversary of the shooting at the Ferguson Empowerment Center down the road from the shooting. Inside, there were many teddy bears, artifacts, and flowers left behind by loved ones, friends, and others impacted by Michael’s death. Among the items collected, hundreds of letters were collected from Canfield Drive and placed in the exhibit. These letters were written to Michael from anyone who visited the memorial. They contained happy memories from family members, laughter-filled stories from Michael’s life-long friends, and points of action by activists and protesters visiting from around the country. To Michael’s family and friends, the focus of the exhibit was to display the humanity of Michael rather than connecting his memory to police violence.

In addition to the art exhibit, there was a community-wide celebration for Michael’s life on the fifth anniversary of his death. This celebration spanned Canfield Drive, and it consisted of a fair, street performances, and music. The anniversary was meant to help people see the memory of Michael as one of rejoicing, the same emotions they should feel throughout the celebration. When thinking of Michael, his family wishes to possess memories that are not surrounded by the tragedy of his death. They wish to remind people of his life and the happiness it held rather than its end.

On the date which would have been Michael Brown’s 19th birthday on the year after his death, it was announced that there would be a permanent memorial put in place on Canfield Drive in his memory. The permanent memorial included a small plaque consisting of a photo of Michael in his graduation cap and gown and a statement about the joy of remembrance. This plaque lies on the sidewalk adjacent to Canfield Drive to remind those who have been influenced by the Black Lives Matter movement that Michael emanates a powerful memory: one of strength, laughter, and joy. This plaque serves as a reflection point for Michael’s life and the climate of the country in the past and present. Both of these memorials depoliticize the memories in relation to Michael’s death. It is meant to bring together communities rather than divide them over a loss of life.

Prior to any permanent memorials, passersby left stuffed animals, flowers, and notes at the site. These items were frequently removed per safety concerns, but it is unclear where the items were brought.These items resembled his loss of life at a young age and the future he could have held. At one point in time, these artifacts were burned and removed from the street. The burning of items that reminded people of Michael shows how divided the memorializing of Michael Brown is in the area. There has been contention surrounding Michael’s memorialization by activists who wish to connect him to a greater message and by community members who do not believe memory works for him are necessary.

There has been a long-standing racial tension in St. Louis, especially in the close suburbs and inner city which have high populations of African American individuals and a police force consisting of mostly Caucasian men. In the year that Michael died, there were 45 shootings in the city of St. Louis, and 42 of them had victims who were African American. After the death of Michael Brown, thousands of people in the St. Louis area protested the wrongful death of an unarmed man of color by an armed police officer. The peaceful rallies rapidly changed to violent protests as individuals burned down businesses and screamed at police trying to control the crowds. The riots erupted in the national news as a story of a community trying together to enlighten the public about the wrongdoings of police in the city. Initially, the riots centered in St. Louis and the surrounding suburbs. Once the national news became involved, individuals in other cities around the country began to question actions by police in their own cities. At this point, the #Blacklivesmatter skyrocketed on social media. The memory works put forth by Michael’s family call to quiet the cries of the rallies and protests in order to remember the life that was lost at the beginning. They hope to refocus the memories associated with Michael Brown Jr. from those of oppression and violence to memories of joy.

The movements sparked by this and many other shootings too alike has shed light upon the inequalities that remain in the United States. Though there have been many attempts to fix the brokenness of the nation, there continues to be a trail of mistakes that are historically overlooked. Amidst the protests lies a young man with a bright future, and the hope of the memory works is to humanize the boy whose death provoked a nationwide cry for justice.