Payne’s Creek Historic State Park also named Payne’s Creek Massacre-Fort Chokonikla site by the National Register of Historic places is located on Lake Branch Road .5 miles southeast of Bowling Florida. The tensions between the Indians and settlers encouraged the authorities to build a trading post in Central Florida to keep the Seminoles away from settlers during the Second Seminole War. Payne’s Creek Historic Park is the site of Fort Chokonikla and depicts the lives of the Florida Seminoles during the 1800s. The park features the Fort Chokonikla Encampment Reenactment which shows the events that were occurring July 17, 1849. Trails lead through the woods where Fort Chokonikla stood there's also a stone monument marking the burial place of George Payne and Dempsey Whiddon. The park provides exhibits interpreting the Seminoles, The Trading Post and events. Picnic tables and shelters for visitors to enjoy and relax to view their surroundings. There are also opportunities to fish, but a fishing license is required. 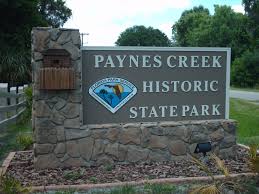 The ending of the Second Seminole War did not bring peace to Florida. The tensions between some of the settlers, Indians and the US Army still remained and incited many plans and acts of violence. Accounts of Indian related violence appeared frequently in the newspaper. The Tallahassee Sentinel reported that in Alachua County Two Indians entered the house of Mr. Gideon Hague Attacking his wife and leaving her dead. His wife, a child, and a girl were the only people at the home at the time. The girl escaped with the child and alerted the family (Knetsch, 2000).

In 1842 when the Second Seminole War ended the federal Armed Occupation Act was passed which let the war vets apply for homesteads in Florida. During this time a reservation was created for the Seminoles in the southwest of Florida. Seminoles often traveled from the center of Florida to the gulf coast to trade passing by non-Indian settlements which was a potential conflict waiting to happen. To eliminate the potential of volatile conflict the ability to trade was limited by the government to prevent them from gaining weapons to create and or cause more conflict. In exchange, white-run trading stores were permitted on the outskirts of reservations allowing Seminoles to acquire luxuries and certain supplies.

According to floridastateparks.org one of the stores was built along the Charlo-popka-hatchee-chee (west of Peace Creek near present-day Bowling Green ) (Paynes Creek Historic State Park, 2020).

. White settlers began to ignore the terms of the treaty with the Seminoles and began to intrude into their reservation. The leader of the Seminoles Billy Bowlegs wanted to coexist with the settlers but many of the people were not so accepting. According to trailoffloridasindianheritage.org on July 17, 1849, captain George Payne and Dempsy Whidden were killed by five renegade Seminoles. Following the deaths were the burning of their stores including all items in them. William McCullough his wife and his infant child managed to escape the fire(Trail of Florida's Indian Heritage, 2020). These attacks were reported to and motivated the United States army to set up fortifications. The forts were intended to protect the settlers north and bestow bases for the United States army to control the Seminoles.

According to the book Florida Seminole Wars Heritage Trail, the leaders which included Billy Bowlegs vowed to produce the culprits in exchange for Peace that earlier prevailed. Five men were identified as perpetrators and hunted down by the Seminole. As proof the Seminoles wanted peace; three of the men were turned over to the Army, the severed hand of another was produced as proof of death and one escaped. peace returned but it was an uneasy peace. The mistrust between the whites and the Seminole continued leading to the Third Seminole War in 1885 (“Florida” 50).

Due to the location of Fort Chokonikla near swamp waters, many who were stationed at the fort died of malaria due to the mosquitos. The casualties caused the forts doctor to recommend its closure. It was agreed upon by the army and it was vacant by July 18, 1850, almost a year after its opening. No fighting took place at this fort. These events did not lead to war immediately. According to Abfla.com the conflict was postponed until 1855 when a band of Seminoles attacked a military surveying party near Fort Myers. Some Seminoles surrendered and were (forced) sent to Oklahoma while others stayed hidden in the swamps of south Florida (Paynes Creek State Historic Site, n.d.). They later signed a peace treaty with the U.S. Government in 1936 during the administration of Franklin D. Roosevelt. Some say the bases were established so the Seminole could be harassed and trailed until the eventually surrendered.