This mass grave was created in response to the worst influenza epidemic in America's history, known today as the "Spanish Flu" and responsible for an estimated fifty million deaths globally between 1918 and 1919. Pennsylvania was one of the states that were hardest hit in the United States and this mass grave in Winfield was the place where three hundred victims of the pandemic, many of whom were recent immigrants, were buried. The burial ground became known as the Black Cross Cemetery because it was originally marked by a large black cross. The land was donated by a local farmer when local cemeteries were full where families and friends buried loved ones. There are also the bodies of migrant workers who had no family to provide them a proper burial. The cemetery is now marked by a white cement cross and a historical marker put in place by Saxonburg District Women’s Club.

The historical marker that stands on the property of the Black Cross Graveyard tells the story of the influenza in the small town of Winfield in Pennsylvania. The marker recognizes the hundreds of immigrant workers buried on the land. 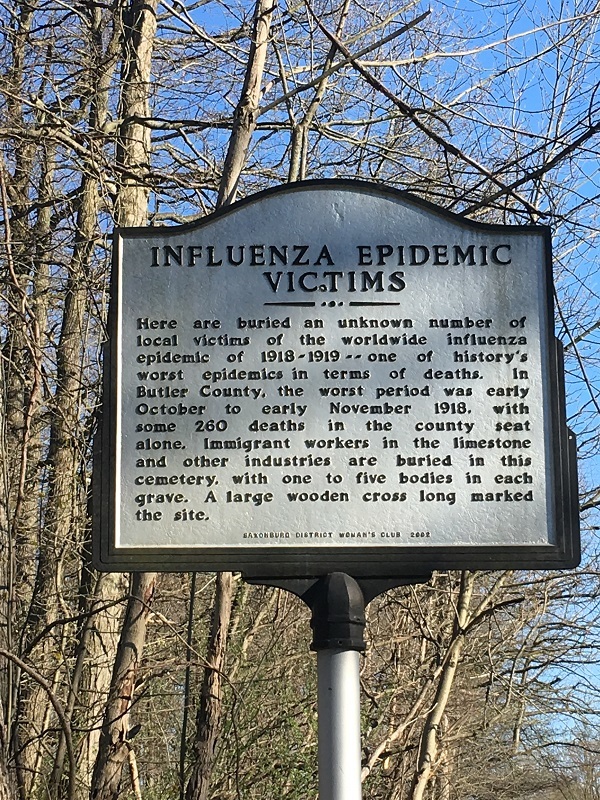 This is the white cement cross put up by the Saxonburg Women's Club to replace the rotting cross that was originally placed by Father O'Callahan. 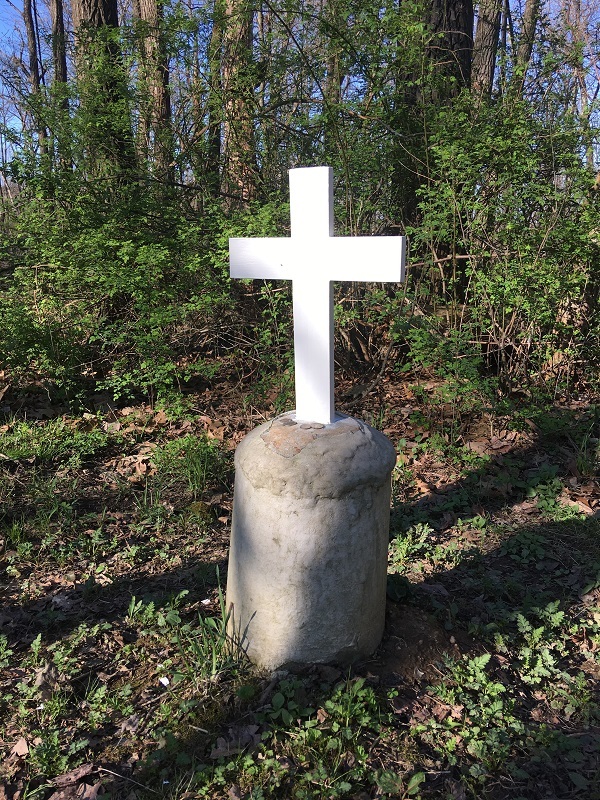 In 1918-1919 a deadly strain of the influenza virus of avian origin began to spread internationally owing to global war that saw millions of soldiers and refugees moving throughout the globe. The first identified case in the United States was recorded among military personnel, but many nations downplayed the severity in order to minimize criticism and prevent their citizens from challenging official propaganda that suggested their armies were winning the war. Due to misinformation, the virus spread rapidly and one-third of the world’s population became infected with the virus. Fifty million dies globally, including 675,000 deaths in the United States. The influenza pandemic during this time was the most severe in centuries and decreased the median life span by ten years. Similar to the COVID-19 pandemic, this influenza caused a swelling of the lungs.

In Pennsylvania alone there were over 60,000 deaths. In the small town of Winfield there were many immigrants of Polish and Slovak descent who came to work in expanding industries. These industries included limestone mines, sand plants, brickyards and salt and tile works. Many of the migrant workers in the area had come alone in hopes of earning money so that they could send for their families. As a result, when the influenza struck, they were all alone. During this time the federal, state, and county governments refused to fund burial costs which led to mass unplanned graveyards.

One of these mass graveyards is located at the intersection of Cornetti and Sasse Road. In 1919 a local farmer donated a field of his to serve as the final resting place for the many bodies. One townsman and his son used their wagon to bring bodies to the field where they would lay to rest. Up to twenty bodies were placed in each grave where hydrated lime was spread across the bodies to speed up decomposition. One priest, named Father O’Callahan ordered for a large wooden cross made of railroad ties to be placed so that the predominantly Catholic immigrants would receive somewhat of a proper burial.

The land is currently owned by Armstrong Cement and Supply Company and is also a Butler County Historical Site. The original railroad tie cross deteriorated and fell apart but was replaced by a white cement cross by the Saxonburg District Women’s Club along with a historical marker. The marker reads as follow “Here are buried an unknown number of local victims of the worldwide influenza epidemic of 1918-1919 – one of history’s worst epidemics in terms of deaths. In Butler County, the worst period was early October to early November 1918, with some 260 deaths in the county seat alone. Immigrant workers in the limestone and other industries are buried in this cemetery, with one to five bodies in each grave. A large wooden cross marked the site.”

The mass grave stands as a reminder to the public of the severity of the influenza epidemic that hit and the one that would eventually hit our country. The new cross and the historical marked placed at the intersection show’s people who pass of the large affect that the 1918-1919 influenza pandemic had on the entire country. If one small town could be affected so deeply, the nation was affected much worse. Now a historical site, the Black Cross Graveyard is the final resting place of upwards of 300 people, mostly men, but with some women and children.