Cook’s Fort was located in what is now Greenville, West Virginia, in the fertile Indian Creek Valley. The fort was constructed in 1773 by Valentine Cook and other settlers in the community. Cook’s Fort was one of the largest frontier forts built in this particular time period. It covered 1 ½ acres of land, had four blockhouses, and during an Indian attack in 1778, the fort was able to protect over 300 residents of the area. Cook also built the first grist mill in the area, which was locate about ¼ mile east of the fort, and stayed in operation until the late 1800’s. Restoration efforts are ongoing at the mill and visitors are welcome to explore the site. 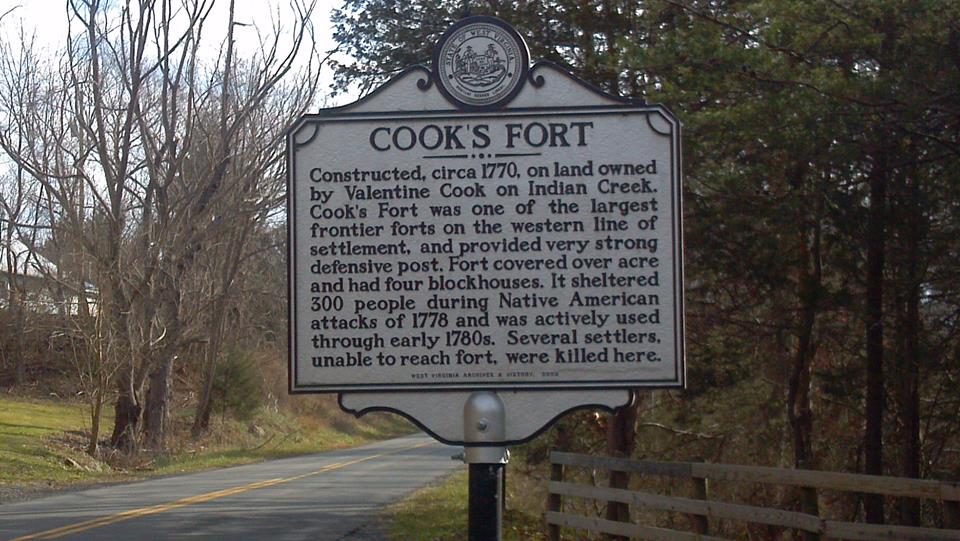 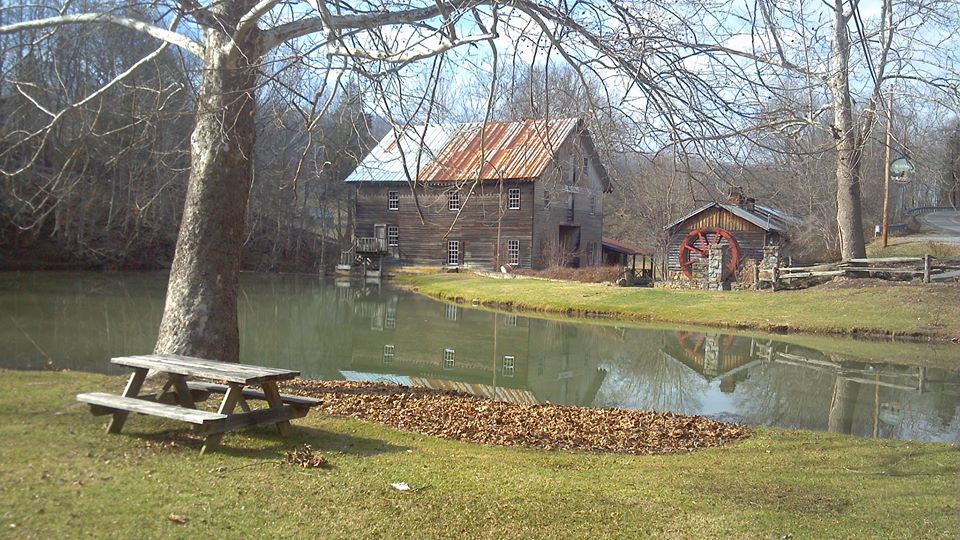 In the early 1770‘s, settlers had started pushing into areas of western Virginia past the Blue Ridge Mountains. Valentine Cook and his family, including his brother Jacob, and several other families, moved into the fertile Indian Creek Valley and started the settlement of Centreville; later the name would be changed to Greenville. Several other families also moved into thee area at the same time. The land that they chose to settle on, however, was long used by the Shawnee Indians as hunting and farming lands. The Shawnee, angered by the encroachment of the settlers, conducted several raids against Cook and his neighbors. In 1773, Cook donated land as a location for a fort to be constructed. The fort would cover over one and a half acres of land, containing four large block houses, and was constructed in a stockade style. Once built, the fort would provide protection for the residents of Greenville against hostile Indian attacks for many years to come. During one raid in 1778, the fort provided refuge to over 300 people.

Throughout the 1770’s and into the early 1800’s, Indian attacks and skirmishes became almost common place to Cook’s community and the surrounding area. Valentine was captured by the Indians on at least two different occasions. Once he was take prisoner and forced to trade his good rifle for an inferior one the Indians had, and was released. Another time he was taken captive, but managed to escape the same night, again returning home unharmed. Cook was not the only settler to have unpleasant contact with the Indians; Jacob Mann and five others set out after a seven Indians that had killed a family in the area. When Mann and his men caught up with the Indians at the Ohio River, he ordered his men to each pick out one Indian and shooting at him, thereby not wasting multiple shots on an individual target. When the firing command was given, six Indians fell dead immediately, and the seventh dropped his weapon and ran away, jumping into the river. Mann jumped in after him, caught the Indian and killed him with his knife. Another incident found Mann running from Indians and hiding in a cave with his dog, while returning to the settlement with a deer he had killed to help feed the residents.

To answer the need to process corn and wheat grown locally, Cook built the first grist mill in the area shortly after the completion of the fort. The original mill was replaced and updated in 1796 and again in 1857. The Cook family ran the mill until 1877 when it was sold. Cook also built and operated a powder mill, for the manufacture of black powder, in the area. Indian Creek kept a consistent flow making it ideal for running mills. The town of Centreville had several other mills, including a carding mill and another grist mill. During the Civil War, part of the town and one of the mills were burned by Union troops in 1862.

The current owners are restoring the mill to the way it was constructed in 1857, and will be open for public tours in the future. Private tours are available by contacting the owners and setting an appointment. Also on the site is a log cabin representative of what would have been built in the community. The owners welcome visitors to come and explore the site, giving an opportunity to learn about life of settlers in early Appalachia. The fort no longer stands, but there is a historical marker very close to the former location of the fort. The fort site and mill are located on Route 122, a road that connects US Route 219 and State Route `12. The landscape is spectacular and makes for a great scenic drive in the country, with several other places to explore in the area.(1), (2)

Privately owned land but is open to the public during daylight hours.