Jordan Field was constructed 14 years after IU relocated from its original location at Seminary Square to the current campus that is still where IU is located today. IU President David Starr Jordan is the namesake for the field, which was the permanent home for Indiana Hoosier baseball and teams from 1898 until the 1916 season. After IU’s varsity teams moved out of Jordan Field, it was used mainly as a recreational field, as well as occasionally for IU baseball/football games as other facilities had maintenance issues, and also as a training ground during the first world war. Jordan Field was also the home field for the Cincinnati Reds and Indianapolis Indians when the two professional clubs held their spring training at IU from 1943-1945. Jordan Field was paved over in 1959 with the only remaining evidence of the field’s location being a plaque located where the field used to be that was dedicated to in 1980. 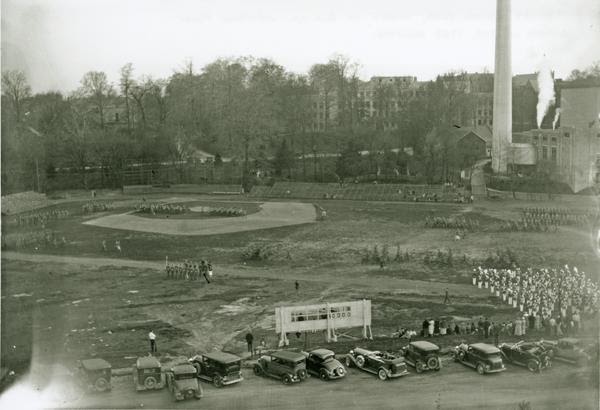 Jordan Field hosted its first athletic event, a football game against what would later be known as Rose Hulman, in the fall of 1897. Although the field was first used in 1897, the facility would not be named for former IU president David Starr Jordan until the spring of 1898. IU’s football team saw a great deal of success in its first few years playing at Jordan Field, and it’s said that the Hoosiers didn’t allow a single point at Jordan Field from 1898 until 1900.

The Hoosier baseball squad didn’t fare quite as well as the football team did, as they hovered right around .500 during their initial seasons at Jordan Field. Converting the field for baseball resulted in some wacky dimensions, as Ernie Andres, who played at Jordan Field from 1937-39, said that right field measured at about 250 feet, center at 360 feet, and left field at 330 feet.

Not only did Jordan FIeld have a strange outfield, it also had plenty of drainage problems due to its close vicinity to the Jordan River. There were multiple occasions when the field was completely bogged down due to rainstorms in Bloomington. To go along with the drainage difficulties, the field also had no bleachers or any significant fan seating to speak of. The university put its first large investment into Jordan Field in 1901, when IU allocated $500 to build bleachers, and then proceeded to lay tile drainage on the field the following year.

The outfield wall backed up to the Dunn Cemetery, an unpurchasable plot of land that still serves as an active cemetery in the middle of Indiana’s campus. In the early 1900s, the Indiana Daily Student wrote about one baseball game stopping as a funeral procession descended on the cemetary. The players removed their hats and waited until the funeral concluded before returning to play.

The university further upgraded the field in 1904, adding a track around the outside for the outdoor track season. Despite the upgrades and relatively recent construction of the field, by 1905 the facility was viewed to be out of date and the students were getting upset by the constant moisture on the grass due to the river. On April 28, 1904, the IDS reported that “At noon yesterday the regular diamonds on Jordan Field were so heavy and soggy that it was found impossible to play the game there…Jordan Field, while all right in dry weather, is a source of continuous annoyance when wet.”

As a result of the lack of drainage on the field, Indiana would steer into the skid during the winter, further flooding the field with fire hydrants, turning it into a skating rink for students.

By 1914, Indiana’s Board of Trustees began planning for a new facility to move the football and baseball team away from Jordan Field. Ground was broken on the new facility in October of 1915 and by the 1916 football season both teams had left Jordan Field, leaving it as a recreational field for Indiana’s student body.