The Graham Hotel was built in 1929 in the Northwest corner of Bloomington’s downtown square and is located at 205 N. College Ave. It was built on the same site as the formerly called Bowles Hotel, and was originally called the Gentry Hotel before that, in a hotel building that was built in 1895. The architect for the Graham Hotel was Indianapolis native Ross Caldwell. The eight story hotel served thousands of patrons for five decades, including the Cincinnati Reds and the Indianapolis Indians when they held their Spring Training in Bloomington. 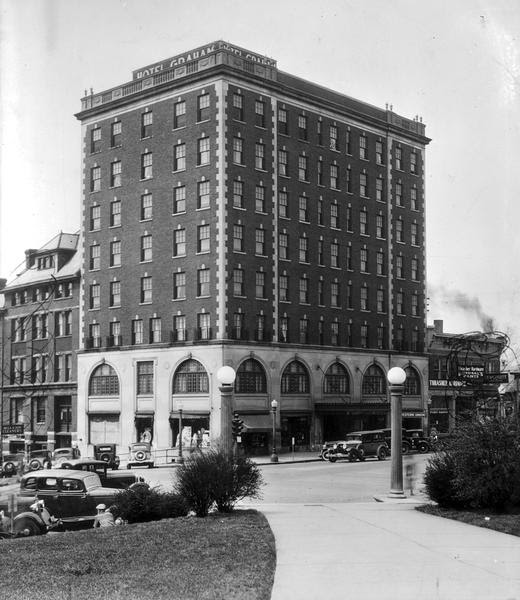 Per the 1943 Reds roster book, the Graham Hotel was the headquarters for the Reds during their time in Bloomington. For a month, it was the home to some of the stars of baseball — Lonny Frey and Bucky Walters.

Built in 1929, the Graham Hotel was built by entrepreneur William Graham, who also owned a car dealership just down College Ave. While the car dealership eventually became a convention center, the Graham Hotel was incredibly successful and hosted many of the premier events in the area. The hotel that bore his name was not Graham’s first foray into the hotel industry, as he had bought (and since sold) the Grant Street Inn.

The Cincinnati Reds and the Indianapolis Indians were not the first prominent guests to stay at the Graham Hotel. As the most prestigious hotel in Bloomington, the Graham Hotel also played host to celebrities like actresses Gloria Swanson and Bette Davis. In its heyday, the Graham Hotel was one of the finest in the Midwest and a landmark destination for anyone who visited Bloomington.

In 1979, the hotel was converted into its current use: an office building, and is now known as the Graham Plaza. Per the Graham Plaza’s website, the building is listed on the nation's National Register of Historic Places.