Indiana University Baseball players are on their way to Japan from Bloomington, Indiana. After being invited to play with Waseda University, plans are set in motion to begin planning on how to get the team over the ocean to Japan. The journey takes them across the country in order to get to a port that can sail all the way to Japan. The port must be on the west coast since Japan is closer to the United States from the west side. Seattle has a port that makes such trips. In order to get to Seattle, the team must take a multi-day train trip from Chicago. Chicago in 1922 is one of the few places in the midwest and is closest to Bloomington that has a major train station that sends off trains across the country to major cities. The team has already taken one train ride from Bloomington in order to get to Chicago. 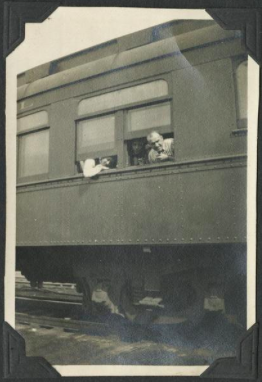 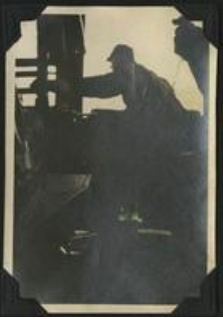 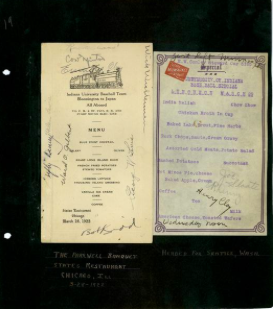 The journey must take off from Chicago, Illinois to Seattle, Washington. The train ride is long and takes multiple days, travelling thousands of miles in order to be able to sail across the Pacific to Tokyo, Japan where Waseda University is. There are no planes or airports at this time to make easier travel. Trains and boats are the primary long distance vehicles for groups of people. The methods of transportation were scheduled ahead for the team as they reached each check point. In this area, the team departs from Chicago in a coach that feeds and provides reasonable accommodations for rest.

One of the pictures that is shown is of the train conductor, the one who controls the train speed and direction. The team captain and another player were curious about the operation method of how the train worked, so they received the opportunity to learn about it. According to the diaries and short labels on the pictures, they shared an hour long conversation in the beginning of the trip about the train ride while the team members talked about their endeavors of making it to Japan to play against a University there. Interest sparked between the two very different occupations.

Since the trip will take multiple days, the team needs to be fed on the ride. The train offers a small variety of dishes that is prepared for the players. A menu in a scrapbook shares some of the meals that are provided. There is roasted duck, stewed tomatoes (which may have been a sauce), iceberg lettuce with thousand island dressing, ice cream, and cocktails. The cocktail option seems odd, considering 1922 had nationwide prohibition for the United States. Another meal had pork chops, baked trout, and mashed potato salad. It is never mentioned how the meals are prepared on the train, so some of the options may have not been as good as described. Chicago, Milwaukee, St. Paul and Pacific Railroad was the railway system that took them on the journey.