The Battle of Dry lake which is sometimes referred to as the battle of Sorass Lake. The battle itself was the first major victory for the United States against the Modoc Indians in 1873. It also ended up being the last major battle of the war. Following the battle the Modoc bands disbanded into many different factions. The battle pitted Colonel Jefferson Davis against Captain Jack Scarface Charley.

Depiction of the troops 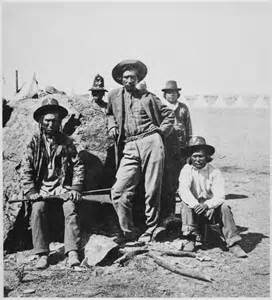 The cross marker of the battle 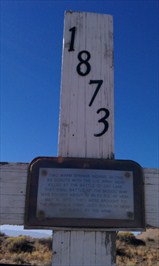 Early on in 1873 Jefferson Davis assumed command of the department of Columbia. After he assumed control of the army his first order of business was to trap Captain Jack. This would be an attempt at delivering a decisive blow to the Modoc Indians. Davis and his men ended up catching up to Captain Jack just southeast of Lava Beds. The camp that Davis made was by a lake that had no water in it giving the battle the name of the Battle of Dry Lake.

The battle would begin in the early morning hours of May 10, 1873 a small number of Indians attacked the American camp. The attack caught the Americans off guard sending hiding behind everything for cover. The officers were able to rally the men get them equipped for battle in all their gear. The Modoc Indians had the upper hand with them being in the high ground and the American infantry men were scared at first of charging up the hills. However after the American Officers ordered the attack the Modoc Indians were quickly routed, the American Indian scouts didn't even arrive before the battle was over.

After the Modoc Indians gave up the bluffs and retreated Davis and his men pursued the Indians for several miles before giving up the attack. This battle marked the beginning of the end of the Modoc Wars. Davis after the battle was very proud of the discipline of his troops for not retreating during the early chaotic moments of the battle. This battle created a huge rift between the Modoc Band with leaders from different groups blaming Captain Jack for a death of one of the men. This rift and blame game caused the Indian group to break up and soon after all the remaining leaders surrendered to Davis.