The Integration of Baseball Comparing Jackie Robinson to Eddie Whitehead

On April 15th, 1947, Jackie Robinson did what no man of his kind had ever done. He broke the color barrier and became the first African American to play in the major leagues. This was known as "baseball's great experiment" and ultimately changed the game as we know it today. This integration did not come easy, though, as Jackie faced abuse of all kinds. Nine years later, Eddie Whitehead became the first African American to play on the Indiana University baseball team. Surprisingly, Whitehead faced much of the same kinds of discrimination that Jackie Robinson faced almost a decade earlier. With baseball becoming integrated, society in America would soon follow. By 1959, Major League Baseball would become fully integrated after the Boston Red Sox promoted Pumpsie Green to the major league roster (Kepner, 2017).

Hate notes that Jackie Robinson received in 1947 with threats to kill him. Despite an unprecedented amount of hate mail, Jackie persisted and even won the rookie of the year award in 1947. 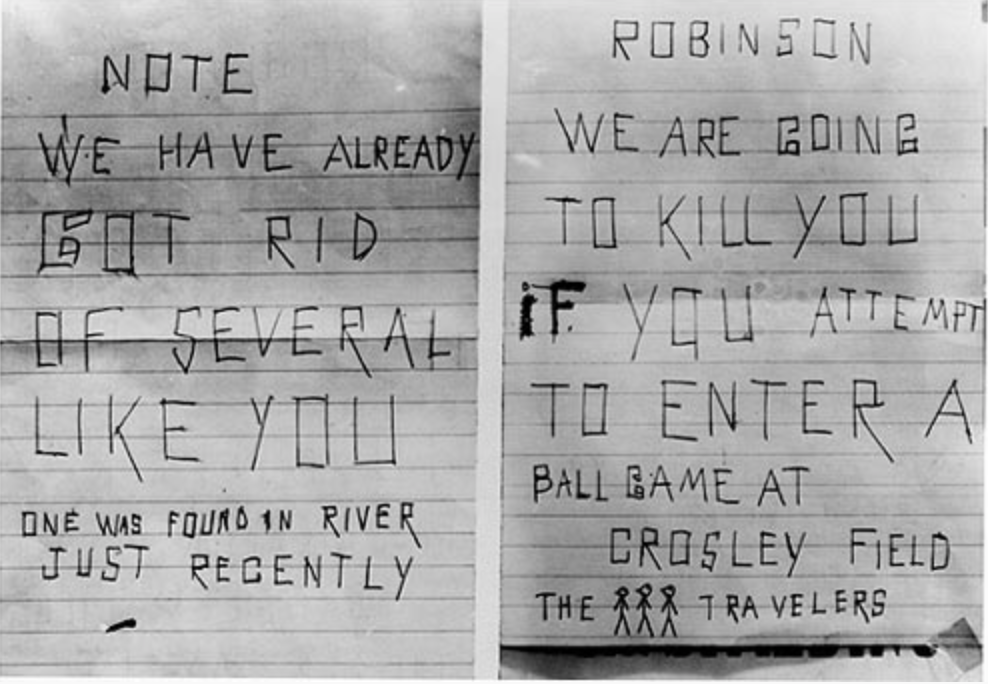 Robinson stealing home in the 1955 World Series. The intensity the Jackie played with garnered the respect of players around the league. 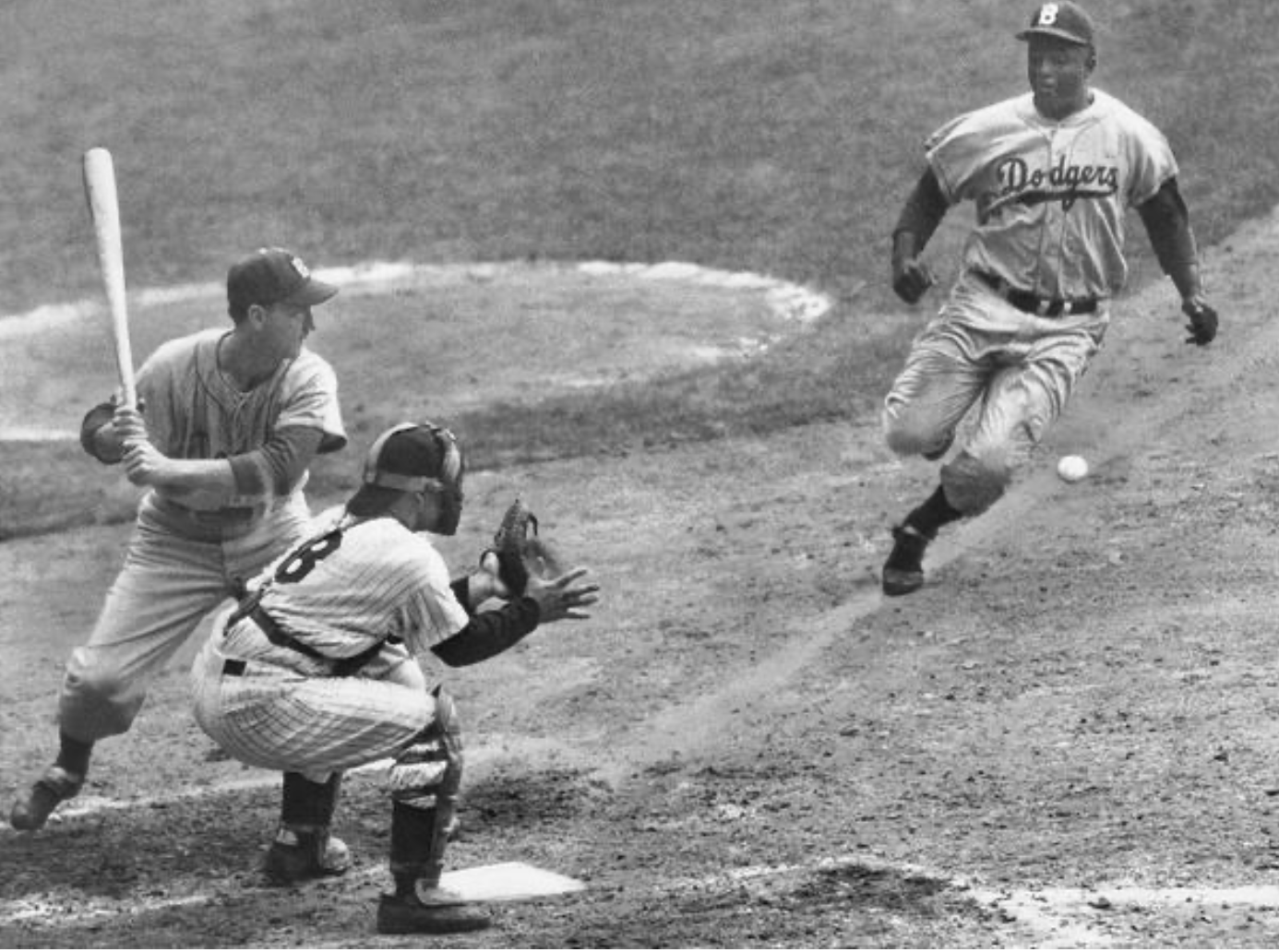 Branch Rickey and Jackie Robinson made history together, breaking the color barrier in Major League Baseball. Both men blazed the trail for other African American's to play in the major leagues. 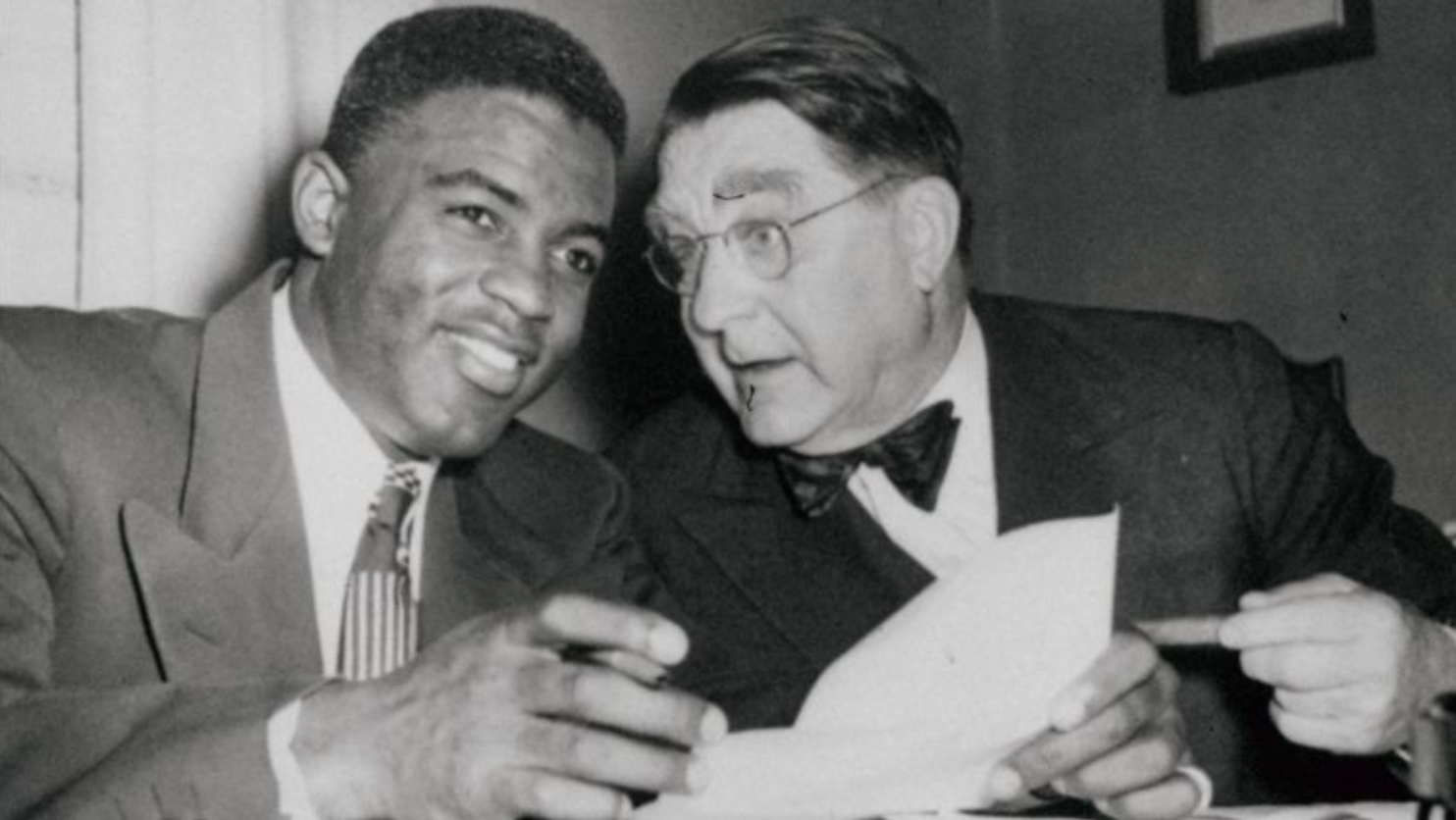 Ben Chapman and Jackie Robinson posing together after Chapman's bench jockeying. This picture was taken to show that the two men were friends despite the racist behavior displayed by Chapman. 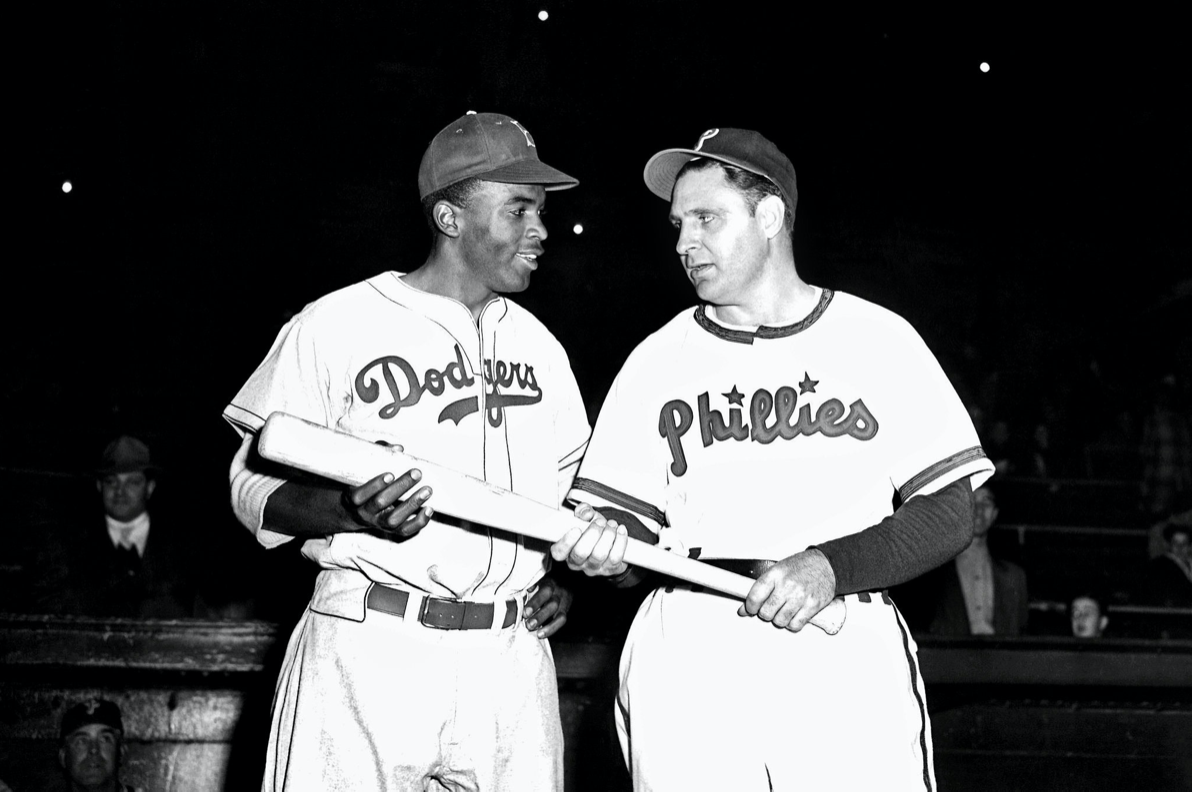 Racist letter sent to Herman B. Wells from the Ku Klux Klan. Despite receiving this, Wells did not back down in his support for Eddie Whitehead. 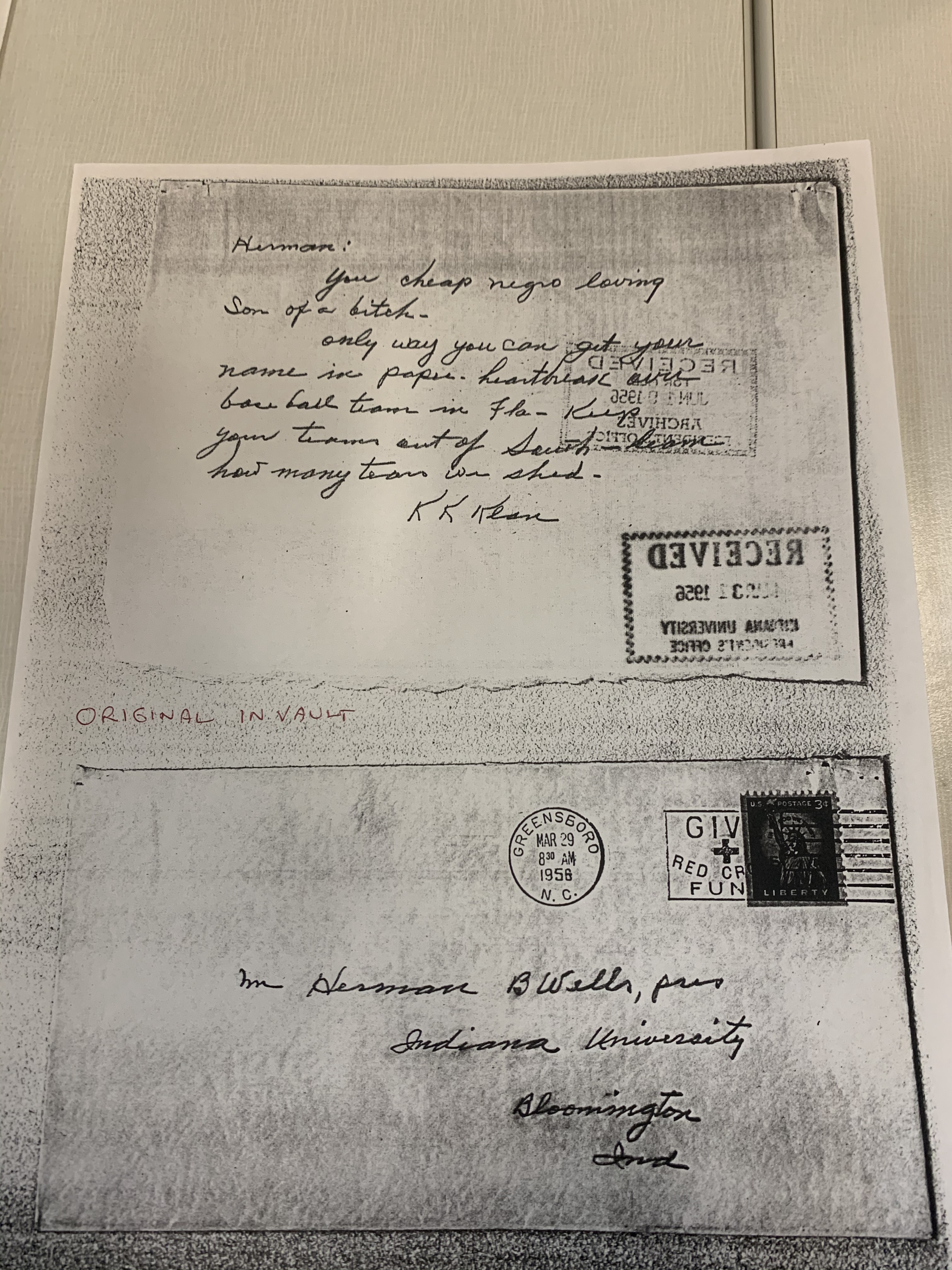 Jackie Robinson grew up in Pasadena, CA with three older brothers. After attending Pasadena Junior College, now Pasadena City College, he attended UCLA in the fall of 1939 where he would be a "4-sport star" (CITE). Robinson became UCLA's first African American baseball player almost two decades before Eddie Whitehead did same thing at Indiana University. At UCLA Jackie posted a batting average of .097 in 1940, but was kept in the lineup because of his stellar defense and quickness (Northam, 2020). It wasn't until 1946 that Jackie got an opportunity to play minor league baseball in the Brooklyn Dodgers organization for the Montreal Royals. In his only season in the minor leagues, Jackie helped lead his team to league championship and the Junior World Series Title, while leading the league in hitting ("Jackie Robinson in the Minors," 1946).

Jackie Robinson faced numerous kinds of discrimination throughout his career, but 1947 was seemingly the most intense. For the first time, an African American was playing on the same professional level as every other white ballplayer. Teams around the league would engage in "bench jockeying" where "no topic was held sacred" (Tygiel, 2008). A well-known example of bench jockeying that Robinson faced came from Philadelphia manager Ben Chapman. According to Tygiel's book, Baseballs Great Experiment, Chapman said, "everything from thick lips to the supposedly extra-thick Negro skull...[and] the repulsive sores and diseases he said Robinson's teammates would become infected with if they touched the towels or the combs he used" (Tygiel, 2008). This kind of treatment was what Jackie had to deal with throughout his unprecedented major league career. From the start, Branch Rickey made Robinson agreed to not fight back so that his experiment would not be ruined.

Robinson also received a lot of hate mail from people across the country, threatening his and his family's lives. One example of racist letters that he received is pictured below. Robinson received one letter before a double header in Cincinnati on May 22, 1951 that threatened to kill him if he showed up to the game. The letter said, "We are going to kill you if you attempt to enter a ballgame at Crosely Field...we have already got rid of several like you. One was found in river just recently" ("Hate Mail Letter," 1951). This letter is just one example of the type of graphic threats that the Dodgers organization and Jackie Robinson received. Despite receiving this, Jackie played in the double header and even hit one home run in the first game (Tygiel, 2008).

Ten years after Jackie Robinson's historic debut into Major League Baseball, the Indiana University baseball team welcomed their first African American player in Eddie Whitehead from Madison, Indiana. Whitehead was one of five catchers on the Indiana baseball team and broke the longstanding color barrier on the Indiana baseball team in 1956. During Indiana baseball's spring trip down south, white supremacists wrote President Herman B. Wells and let him know how much they disliked his support of IU's Black player. Much like Jackie Robinson, he received letters from people wanting to share their animosity towards him. Even the Ku Klux Klan passed along their thoughts of Wells as a "cheap negro loving son of a bitch" and warned him to "keep his team out of the south" ("KKK Letter," 1956). Wells also received a letter from the owner of a small insulation business in Jackson, Mississippi saying that Wells is at fault and should not criticize southerners for their "way of life" ("Porter Company Letter," 1956). By defending Whitehead and the treatment he recieved, President Wells was attacked by groups and individuals. They believed that he wasn't just defending one of his players, he was defending a Black man.

Both athletes were pioneers in their own right and had to endure immense hardship and discrimination in order to change the sport forever. They risked everything and even endured physical abuse to blaze a path for many who would follow. Despite the hate they received, both men refused to back down and decided to play the sport they loved. Jackie Robinson and Eddie Whitehead will forever be known as the first African Americans to break the color barrier on their respective teams and leagues.