Taxation without representation, corrupt political officials, unrest among the colonials, and farmers taking up arms as a last resort to settle their disputes against the overbearing British power. This description sounds a lot like the causes of the American Revolution. However, these issues were the cause of the Battle of Alamance almost 5 years before the start of the Revolutionary War. The Alamance Battleground is the site where the Regulators took up arms against the Colonial Militia under the charge of Royal Governor William Tryon. The battle itself lasted only two hours as the Regulators, though superior in number were handily defeated by the better-equipped militia. The Battleground today serves to commemorate the western Carolinian unending resolve to stand up to the British and their unfair and unequal treatment of the colonials not only in North Carolina but also throughout the colonies. The Battle of Alamance is cited on various plaques and monuments throughout the battlefield as the first battle of the Revolutionary War. 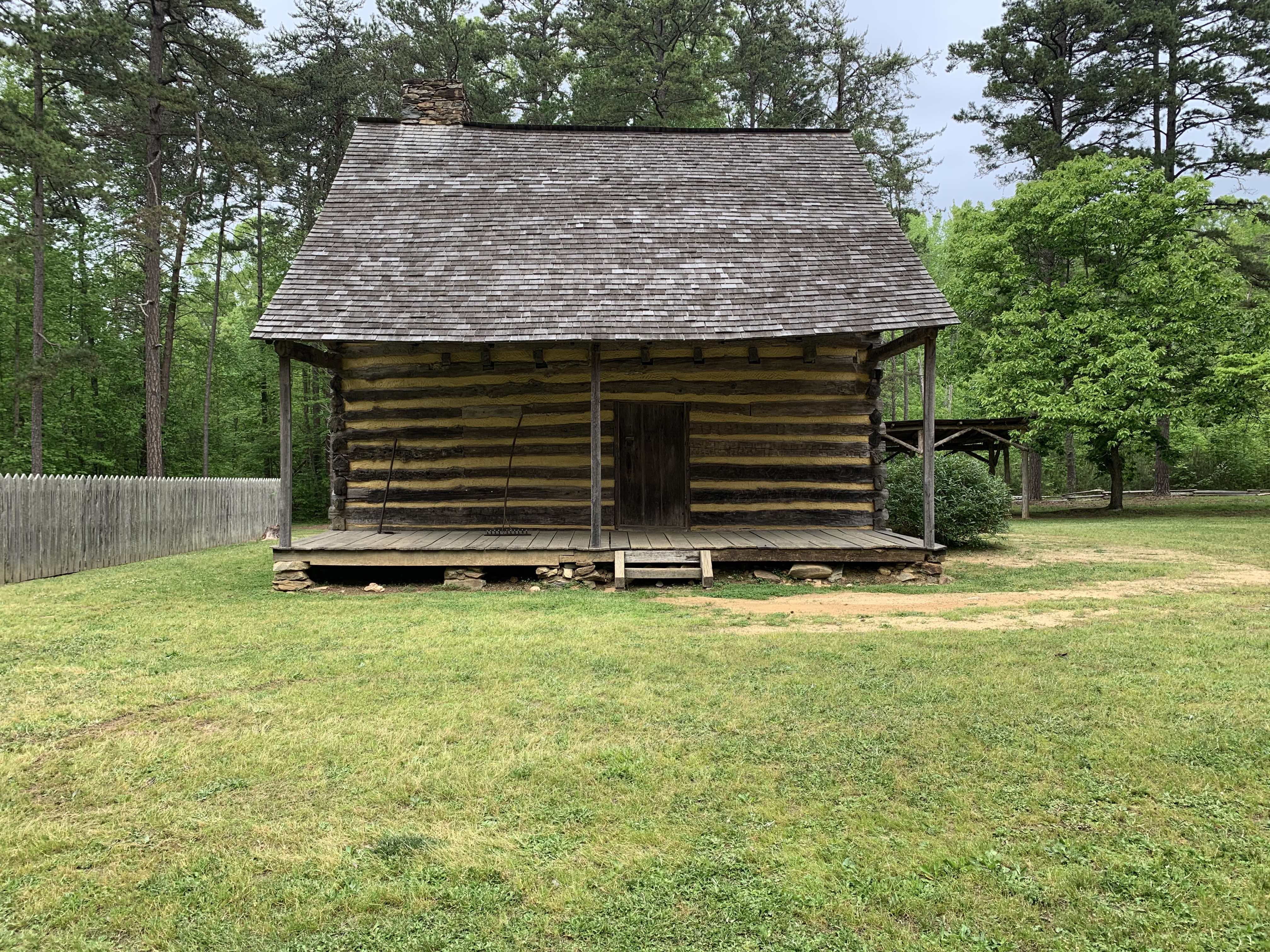 From Regulators to Revolution 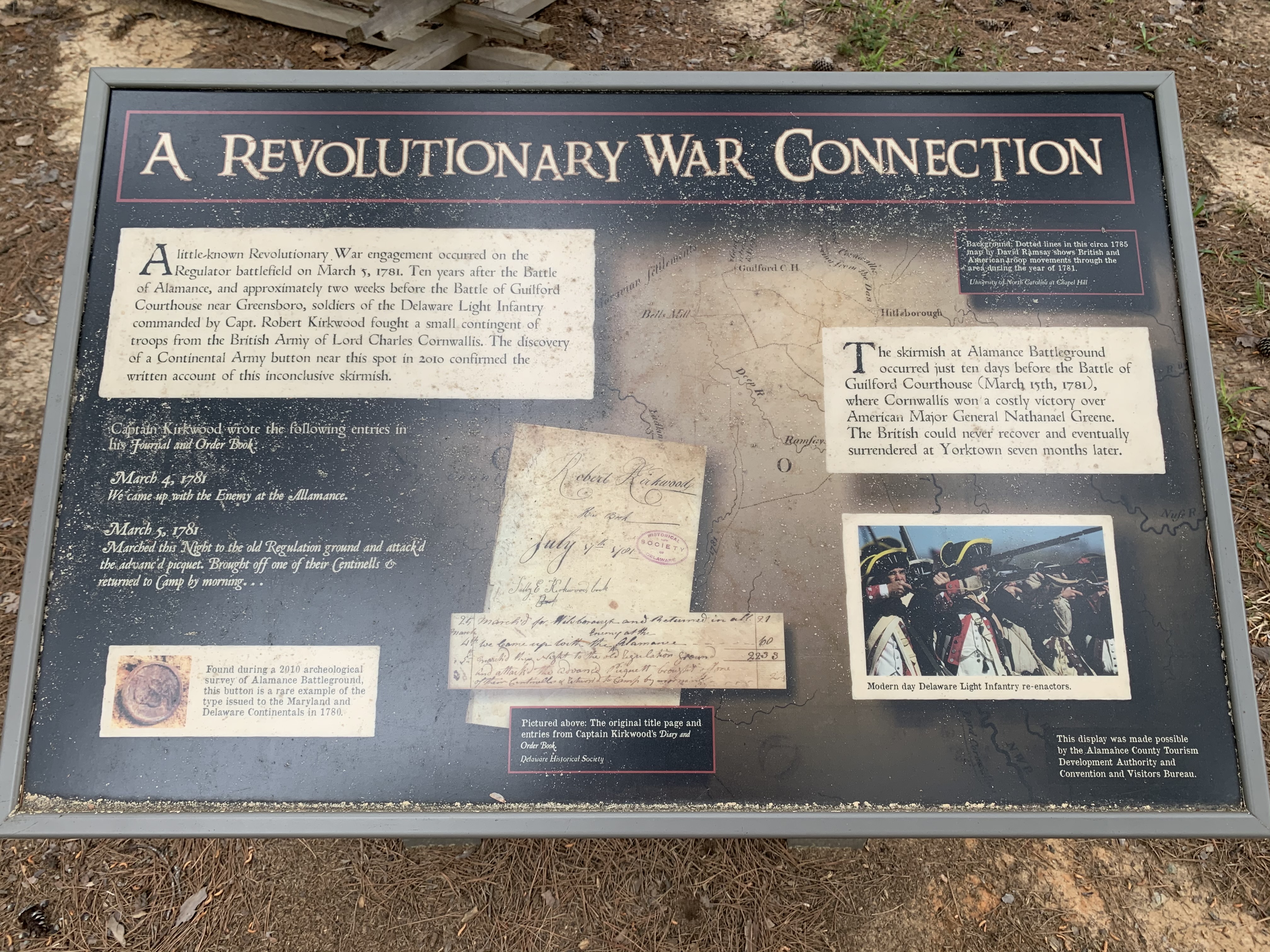 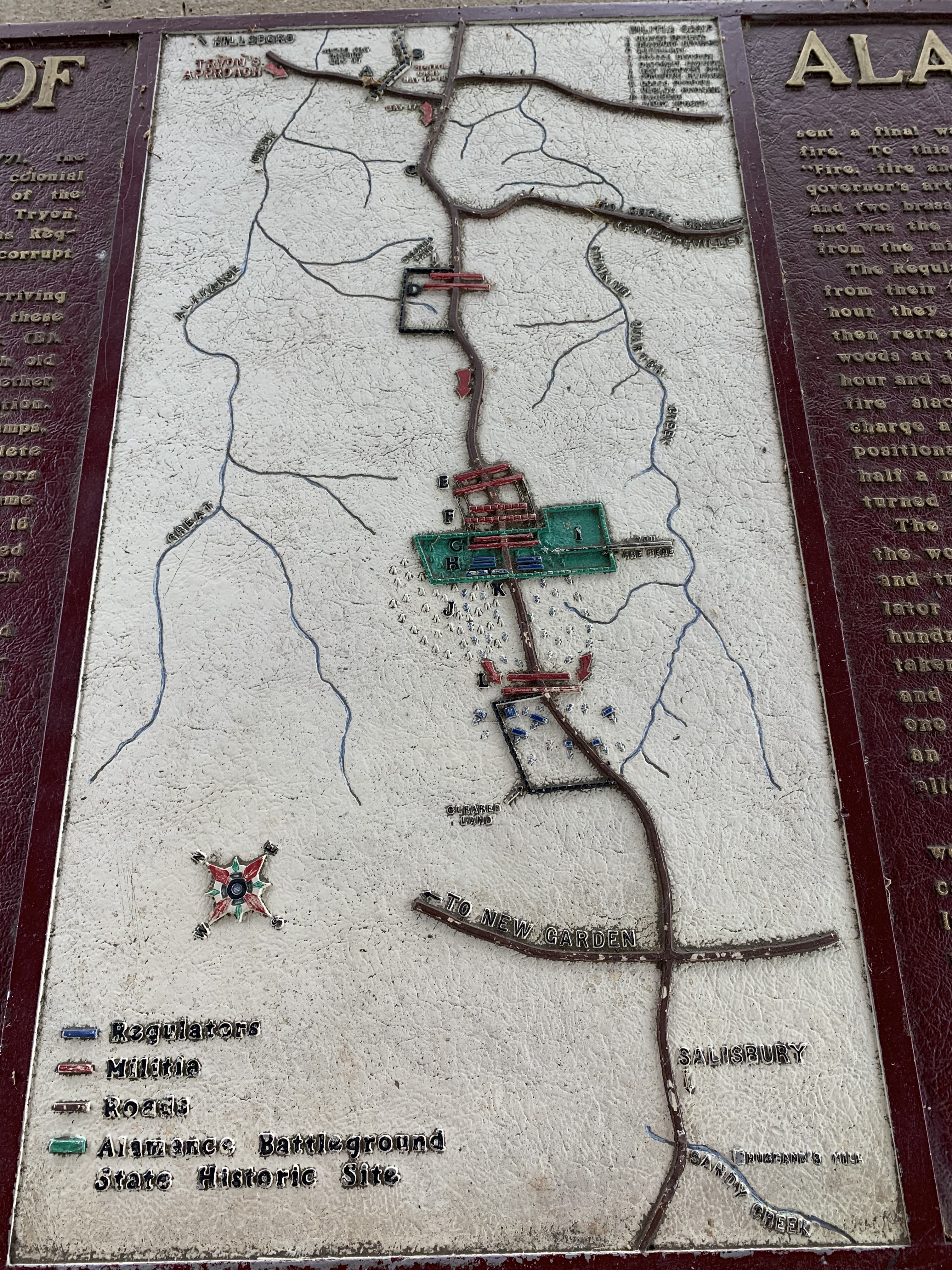 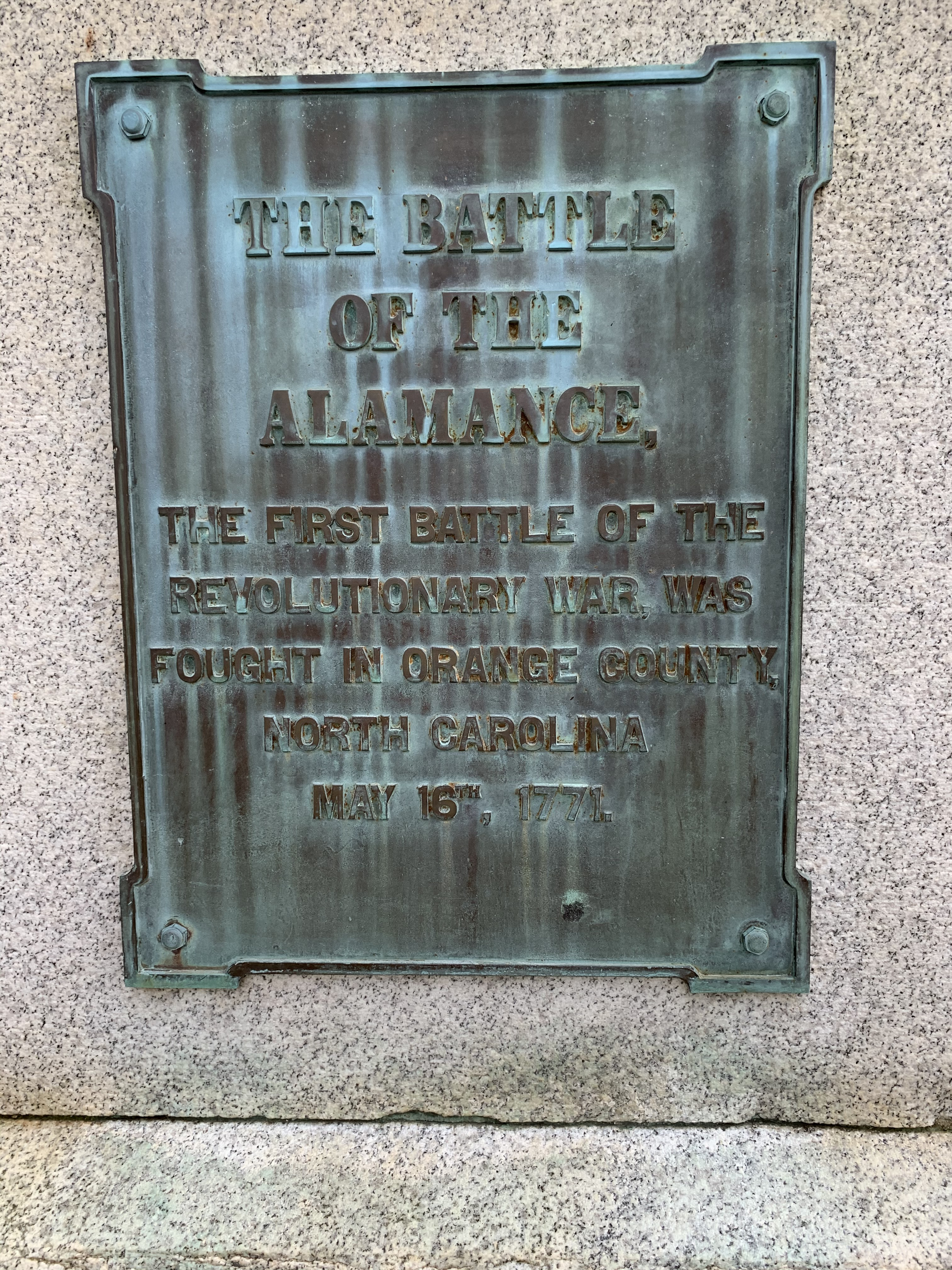 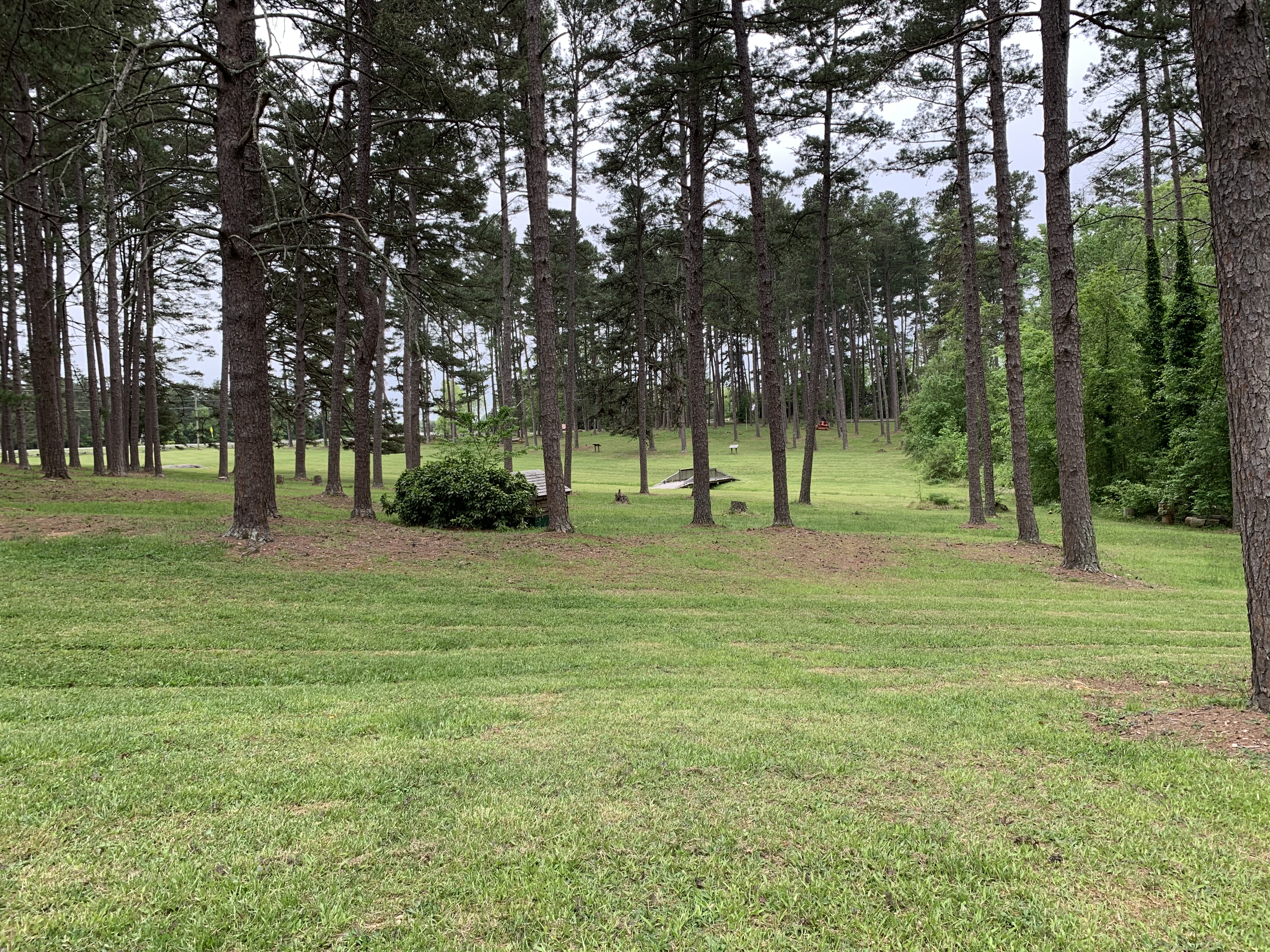 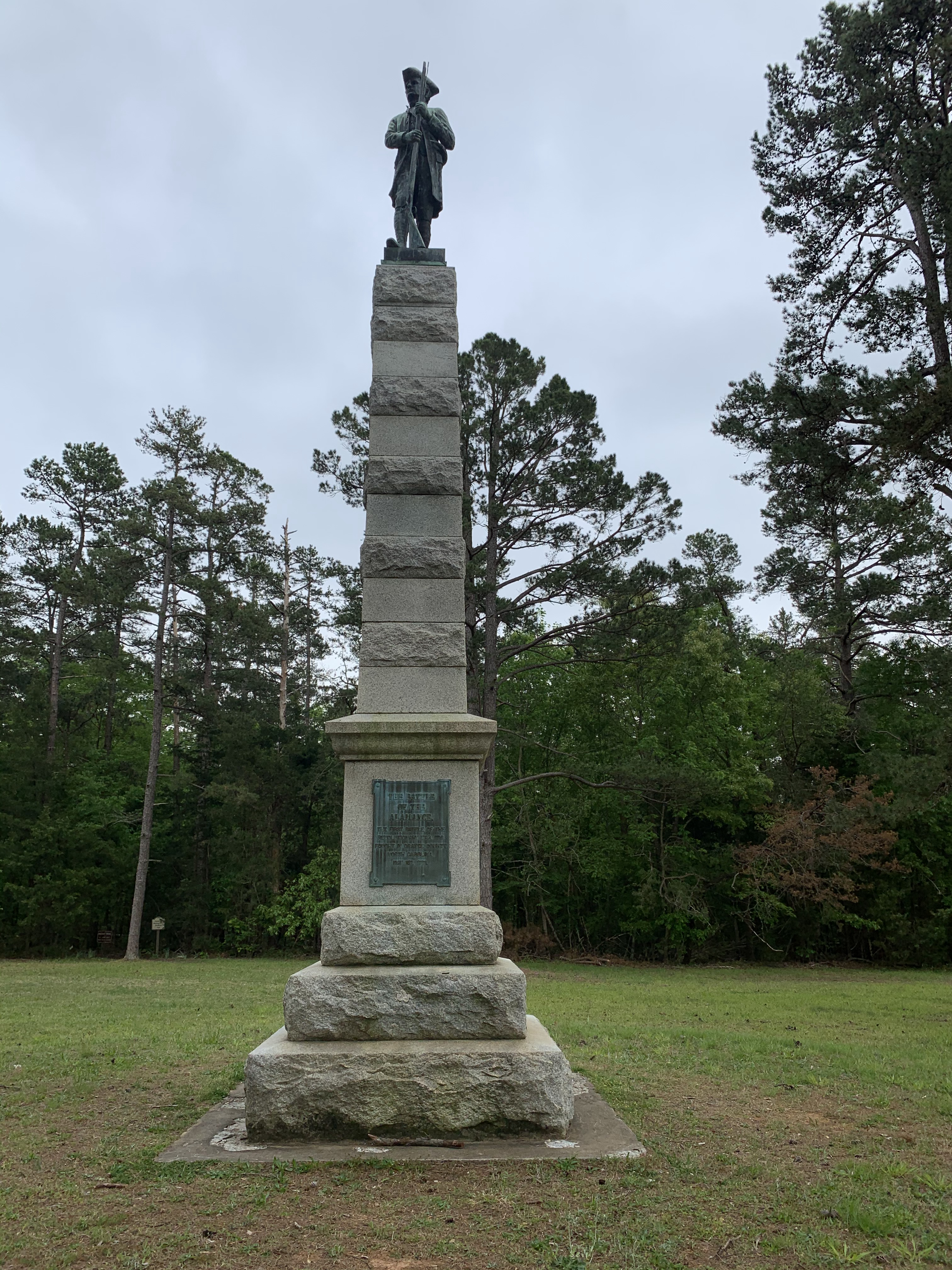 The Regulators were led by several prominent leaders including Rednap Howell, William Butler, James Hunter, and Herman Husband. Herman Husband had been a prominent fixture in western North Carolina. Husband had an established correspondence with Benjamin Franklin and was elected to the North Carolina Assembly twice, where he spoke out against the unfair treatment by Governor Tryon, local judges, and lawyers. He was dismissed from the Assembly and jailed, though later freed when a mob formed to come set him free. Husband was also a Quaker and therefore not a leader on the battlefield but was responsible for spreading pamphlets seeking a peaceful resolve from Governor Tryon. At the Battle of Alamance, Husband arrived with the group of 2,000 Regulators and sought a peaceful disposition with Governor Tryon. However, after it had been decided that the group would not disperse as Tryon ordered, Husband, abiding by his Quaker principles fled the battlefield. Following the Battle of Alamance, Husband fled North Carolina and went to Maryland under the name “Tuscape Death” and later “Old Quaker.” Husband eventually reclaimed his name after the Revolutionary War.

The Battle of Alamance was the result of the growing dissatisfaction between the western Carolinians and Governor Tryon along with other colonial officials such as Edmund Fanning the register of deeds. The Regulators were unhappy with high taxes imposed by Governor Tryon to build the capital and the governor’s residence; illegal registration fees by Fanning, and dishonest sheriffs. On May 16, 1771, a group of 2,000 Regulators gathered at the plantation of Michael Holt. Governor Tryon called up the militia and offered a bounty of 40 schillings to suppress the Regulators. After several attempts to end the insurrection peacefully, Governor Tryon offered the ultimatum for the Regulator to disperse within an hour. The Regulator refused to disperse and responded, “fire and be damned.” Thus, the battle ensued, and though mightier in numbers, the Regulators soon found themselves retreating after two hours of fighting. The Regulators lacked a true field commander and the militia was better equipped and had artillery. The Regulators managed to capture one of the canons but were unfamiliar with how to use it and lacked ammunition for it and were soon pushed back while the militia retook control of the canon. The Regulators were defeated and suffered heavy casualties with disputed reports estimating between 9-100 killed and as many wounded. Governor Tryon reported that 9 militiamen had been killed and another 61 wounded, though these numbers are also disputed.

Following the Battle of Alamance, the militia captured 15 Regulators, and one by the name of James Few was executed that night. Six others were executed a few days later in Hillsborough. Governor Tryon offered a reward for Husband, Hunter, Howell, and Butler. Regulators who remained were forced to sign oaths of allegiance to the Crown. Others who fled had their land sold by Governor Tryon and those who chose to search for Husband, Hunter, Howell, and Butler were allowed to leave while their children were kept hostage by the militia. Following the battle, Governor Tryon assumed he was reassigned as the Governor of New York, taking Edmund Fanning with him as his secretary.

Today, the Alamance Battlefield pays tribute to the Regulators who took up arms against the corrupt British rule under Governor Tryon and his corrupted public officials. The battlefield is a 40-acre memorial which is adorned with monuments and plaques commemorating the events of May 16, 1771. On the battlefield, you can find the home of John Allen, along with the family garden. There is also the visitors center that houses artifacts from the battle as well as information for further events. Several events that are scheduled throughout the year including re-enactments of the battle and descendants gathering, where generations of families gather to honor their ancestor’s bravery and sacrifice. The site also offers a homeschool day at the battleground where you can learn 18th-century skills such as musket firing, cooking, gardening, and Blacksmithing. The Alamance Battlefield is a testament to Regulators and their fight for equality and justice against an overbearing rule of Governor Tryon.