For the last 55 years, Zim’s Bagging Company has been a staple to the Tri-State Area, working with many customers from Fortune 500 companies, E-Commerce Companies, automotive corporations, and bedding and appliance industries. It all began in 1964 when Harry Zimmerman Sr. started the business out of his home garage with a cellophane machine. In 1970 they became an official organization. They have expanded four times over the years to speed up and manage their production. In 2019, the Wayne County Economic Development Authority honored Zim’s Bagging Company as the Business of the Year. Today, they provide several places across the nation with poly bags, wicket bags, powerpack mailer bags, printed roll stock, and foam and bubble sheets. 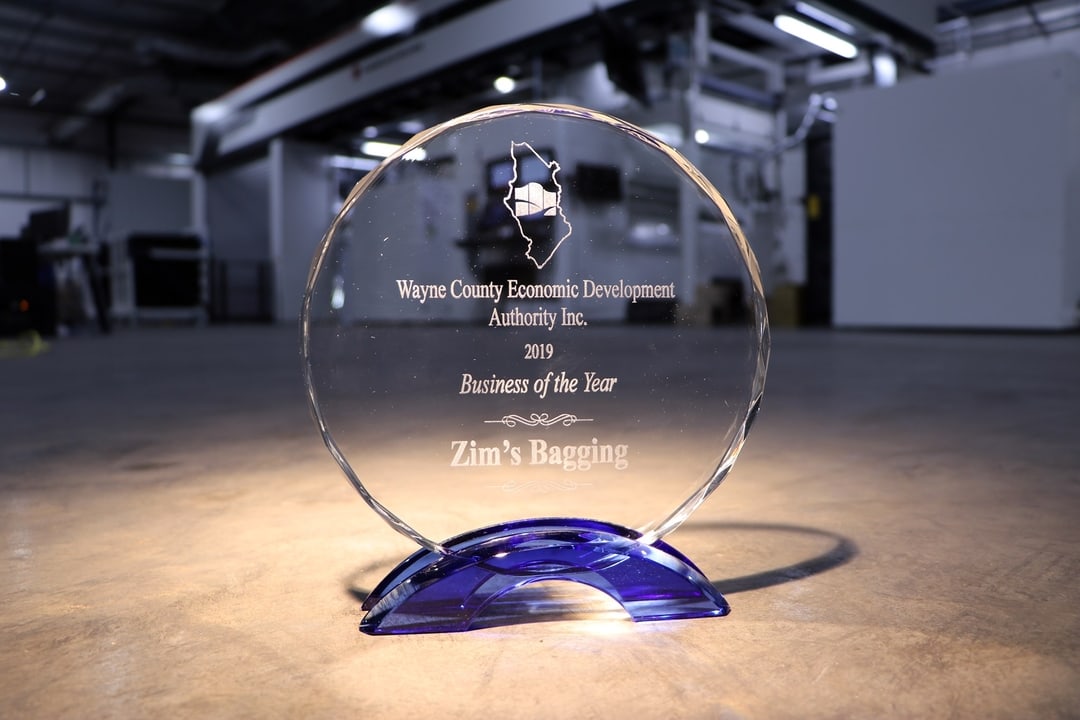 Pictured is a screencap of the Herald-Dispatch discussing the fire that took place in 1972 at Zim’s Kenova location. 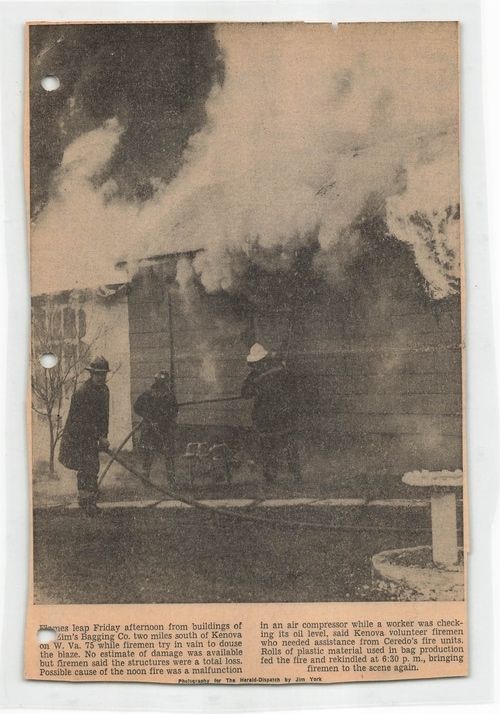 Pictured is the original building located in Prichard West Virginia. 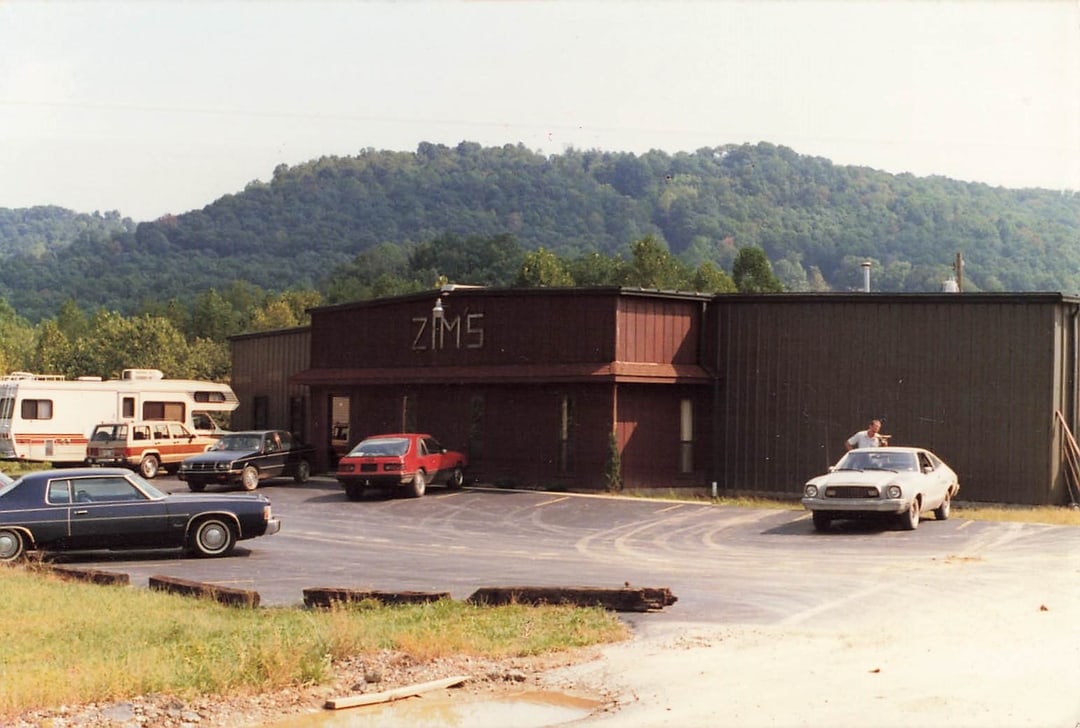 Pictured is the main Zim’s building in its current state. 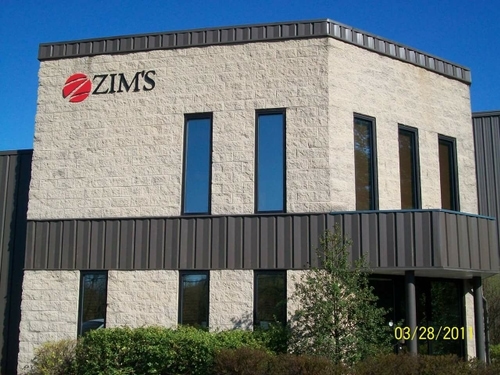 Pictured is the second facility built in 2007 at the Prichard Industrial Park. 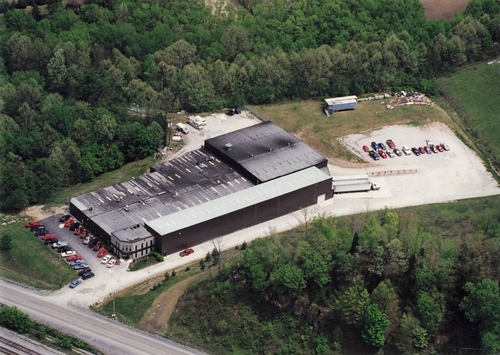 In 1964, Harry Zimmerman Sr., a 63-year-old employee at ANR in Ceredo, WV, started a business of his own called “Zim’s Bagging Company,” in the garage of his home in Wayne County, WV. He began with himself and a cellophane machine that he used to produce and supply bags to the snack and candy industry across the Tri-State Area. In 1970, the company became a corporation under West Virginia Law. This was when the corporation purchased its first polybag machine that would seal the bottom of the bag. This purchase allowed their company to flourish due to the amount of garbage and box can liners they could produce for local hospitals and industries within 100 miles.

In 1970, the business rented a 1500 ft building located on Route 75 in Kenova, WV. Unfortunately, in 1972, they lost all of their machinery in a fire. The insurance couldn’t cover the damages, so with the help of some friends, Harry Sr. moved the company back to his garage. Shortly after relocating, he bought a new Weist bag machine and was up and running two weeks later thanks to his son, Charles Zimmerman, and his son in law, Ron Clark. In 1974, the company began to have employees, including Janice Zimmerman as the bookkeeper, and the following year as vice-president. In 1975, Harry Zimmerman, Sr. retired and elected his son, Harry Zimmerman, Jr. as president. They also hired their first sales representative, Fred Woerner. Harry Jr.’s first executive decision was to introduce printed packaging material to the company. To ensure this, he purchased a Sheldahl side seal machine and a printer in Charleston, WV.

Over the years, Zim’s Bagging company has relocated and expanded multiple times. By 1978, the business was booming, so they moved to a building on 29th street in West Huntington, WV. At this location, the first printing press was introduced along with two more bag machines. In 1982, an 8,000 ft. building was built at their current location near Prichard, WV. Since their official opening, they have expanded four times.

Their main facility became 48,594 ft full of many bag machines. In 1997, they built 4,008 ft of new office space at the front of this location, along with a 10,332 ft warehouse for inventory storage. They also purchased a six-color CI printing press with four-color, process print capabilities, and multiple new foam and film converting machines. In 2007, due to the company’s outstanding success, they purchased a second 22,100 ft facility located at the Prichard Industrial Park to form their Soft Pack Division. In 2016, they added a 15,195 ft building to the existing Soft Pack Division to allow them 37,295 ft of foam and bubble pouch manufacturing and storage areas. In 2018, they built a 12,000 ft building adjacent to their first Zim’s location to place a W&H Miraflex 20 color, 59” Printing Press.

Today, after 55 years, Zim’s Bagging Company is privately owned and employs around 100 workers. These employees ensure the satisfaction of many companies, whether they be Fortune 500 companies, E-Commerce Companies, automotive corporations, or bedding and appliance industries. They hope to work with food packaging and medical industries in the future. Zim’s Bagging Company ships to many states found in the Southeastern and Mid-Eastern parts of the US. The Wayne County Economic Development Authority honored Zim’s Bagging Company as the 2019 Business of the Year. They pride themselves on being able to tailor products to every customer’s needs. The products they offer are poly bags, wicket bags, powerpack mailer bags, printed roll stock, and foam and bubble sheets.