Rainbow Bridge is located in the heart of Utah. It is considered to be one of the largest arches in the world. “From its base to the top of the arch, it is 290 feet-nearly the height of the Statue of Liberty-and spans 275 feet across the river; the top of the arch is 42 feet thick and 33 feet wide.” (National Park Service) Rainbow Bridge has been a great wonder to the American people. Several Indian tribes that lived around the bridge considered the natural stone bridge a sacred area. The location of the stone bridge is not easy to access. The bridge is among isolated canyons near the Navajo Mountains. To reach the arch a person will have to travel on a two-hour boat ride on Lake Powell. After a soothing ride along the river a mile long hike is in store for the sightseer. The hike can be extensive so make sure to bring the right essentials for walking. In 1909 Rainbow Bridge was open for the public to view the natural wonder. President Taft in 1910 made Rainbow Bridge a National Monument. "The extraordinary natural bridge, having an arch which is in form and appearance much like a rainbow, and which is of great scientific interest as an example of eccentric stream erosion" (Wikipedia). There have been many travelers to the arch such as Teddy Roosevelt and Zane Grey. Rainbow Bridge is still open to the public today where thousands of people come to see the natural bridge. Navajo Tribal members is 1974 filed a law suit against the U.S District Court claiming that Rainbow Bridge is a sacred ground that should not be disturbed by tourists or the rising water from the Glen Canyon Dam. The court disagreed with the Navajo Tribe saying the water storage was needed and gave it no other thought. By 1993, the National Park Service voiced their concerns about the tribe's sacred monument. The National Park Service simply asks visitors to respect the natural arch since natives found it sacred. Rainbow Bridge is a puzzling wonder and great sight to see if visiting the great state of Utah. 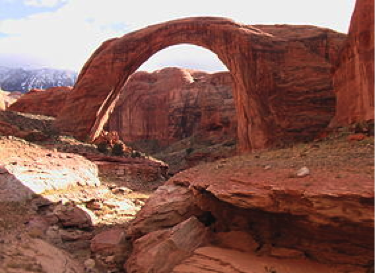