Listen to a narration of this entry's description by Western Michigan University HIST 6750.

In 1995, the National Register of Historic Places added Battell Park Historic District. The city of Mishawaka incorporated this eleven-acre park into the city’s river walk; its official name is the River St. Joseph of the Miami’s Trail. Walkers can easily spend time exploring the beautiful landmarks available. Dedicated in 1881, Battell Park is the oldest park in Mishawaka. The park’s most notable landmarks include a Civil War memorial, a Jazz Age constructed brick and stone bandshell, and a rock garden built by the Works Progress Administration. Prior to its dedication as a public park, the land served as a private park, named Riverside Park. Key figures in the development of the city of Mishawaka used the park, most notably Grove Lawrence, James R. Lawrence, and the park’s namesake, Joseph Battell. In 1852, Battell “bought out the remaining interest from the Lawrences and became the sole owner” of this land. Upon Battell’s death in 1874, members of the Battell family continued his work in developing the city. These family members, most notably Robbins and Anna Battell, deeded Riverside Park to the city of Mishawaka, who then renamed the land and established it as Mishawaka’s first public park. [1] 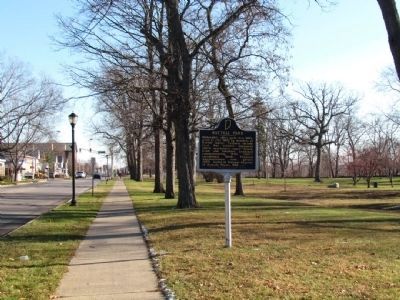 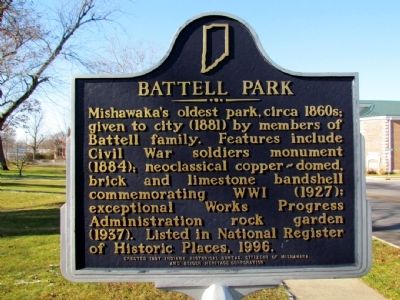 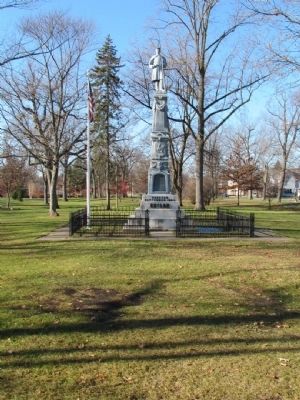 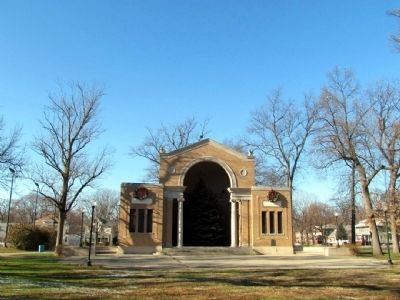 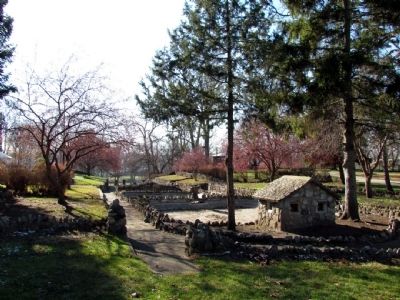 Listen to a narration of this entry's description by Western Michigan University HIST 6750.

The Soldiers’ Memorial: The Civil War memorial, also known as the Soldiers’ Memorial, was built in 1884. Standing thirty-two feet in height, it consists of a white bronze statue of a Union soldier atop a large concrete base. There are four different reliefs on the monument displaying scenes from four Civil War battles—all battles in which Mishawaka men fought. On the east side, you will see a soldier on horseback, and a depiction of the Battle of Shiloh, one of the deadliest battles of the Civil War. Below this image is a medallion of President Garfield, who was assassinated shortly before the monument was erected, in his Union General dress. On the west side, there is a Grand Army of the Republic (GAR) veterans’ symbol, an eagle over cannons with cannon balls. President Lincoln’s medallion is below the GAR symbol. Also on this side is a scene from the Battle of Chickamauga, fought in Tennessee; this is the only battle depicted on the monument in which the Union was defeated. The north side of the monument has a depiction of the Battle of Mobile Bay and a bust of Admiral David Farragut, with a sailor and an anchor. This battle is most famous for Admiral David Farragut’s phrase “Damn, the torpedoes. Full speed ahead.” Finally, on the south side, there is a shield above drums representing the Battle of Vicksburg, the final major battle in the West. Below this image is a medallion of General Grant. Near the medallions and busts are these quotes: "The war for the Union was right, everlastingly right; and the war against the Union was wrong, forever wrong” which is attributed to General Garfield, and "The Union must, and shall be preserved,” which is attributed to President Jackson. [2]

The Memorial Time Capsule: The White Bronze Company of Detroit designed the memorial, which cost a total of $1,460. Within the memorial’s original base, officials placed a sealed time capsule. It was first opened in 1967 during the restoration of the original base. This capsule contained an array of items that added to our understanding of both the monument and the history of the city itself as of 1884. Upon the discovery of the capsule and its contents, several prominent individuals and groups, including the Mishawaka Historical Society, decided to reseal it. Before resealing, however, officials added city records and an almanac from 1967 to the original contents of the capsule. Positive that the restorations of the memorial would last, officials placed the time capsule and its new contents at the base of the memorial again, intending it to be opened about one hundred years later. This hope did not come to fruition however, and in 2019, due to the deteriorating condition of the memorial, the city of Mishawaka once again decided to restore the monument. While the statue of the Union soldier was taken for restoration, craftsmen built a new base and during that process discovered the time capsule for a second time. Once restored, the memorial will be part of a new Veteran’s Plaza, with the soldier back at his place at the top and the time capsule reinstalled on Memorial Day of 2020. [3]

The Bandshell: The second dominant feature in Battell Park is the bandshell. Finished in 1927, the building is constructed of concrete, limestone, and copper. In 1918, a bandshell was constructed to make the park more accommodating. In the midst of the Roaring Twenties as the city grew, the city decided that the park would benefit from an improved bandshell. Built in the Classical Revival style and costing about $20,000, the bandshell was finished within a year but was not dedicated until May 28, 1928. The bandshell honors Mishawaka's World War I veterans with a commemorative plaque on the front that reads: “Dedicated to those of Mishawaka, Indiana, who offered their lives in humanity's defense in the wars of the nation and in memory of those who gave their last full measure of devotion.” Memorial Day parades typically end near the bandshell and the Civil War memorial. [4]

The WPA Rock Garden: The third significant feature of the park is the rock garden constructed by the Works Progress Administration (WPA) in 1936. Part of President Franklin Delano Roosevelt’s efforts to ease the Great Depression included the creation of the WPA. Established on May 6, 1935, by Executive Order 7034, the WPA created many artistic and practical works around the country. Like most other Depression Era governmental projects, the rock garden enhanced the national infrastructure as well as provided employment to local artists, writers, and builders. Between the years 1936 and 1937, the WPA constructed a five-tier, cascading rock garden at Battell Park. The garden consisted of a replica of a mill house and a waterfall with several small pools, and an arched bridge. From the mill house, the water flows through various rock levels all the way down to the St. Joseph River. When the rock garden opened to the public, fish swam freely through the whole garden. There is a stone bridge halfway down the garden. Although not officially part of the park, the retaining wall featured along the walking path was also built by the WPA. [5]

Battell Park Today: Today, Battell Park remains a landmark in the lives of many people in Mishawaka for both public and private gatherings. The park continues to be a source of entertainment, hosting concerts and a variety of outdoor activities throughout the year. With the establishment of the city of Mishawaka’s Riverwalk, many people use Battell Park as a way to maintain a healthy, active lifestyle and to connect with nature. The park is also popular for families because of its large playground and splash-pad, which are crowded during the summer months. Families use the space for gatherings such as reunions, birthday parties, and even weddings. The city of Mishawaka has developed many other parks since Battell Park’s establishment in 1881, but Battell remains a community favorite throughout its over one hundred years of existence.