Cresson Sanatorium, also called "The San," was a sanatorium for tuberculosis patients located in the mountains outside Cresson, PA, in Cambria County. The sanatorium operated for the first half of the twentieth century as an escape from harsh city life for those with tuberculosis. The sanatorium, which later became a psychiatric hospital and correctional facility, is now closed, but those who spent time on its grounds as workers and employees still recall its history online through a growing body of recollections and shared history. 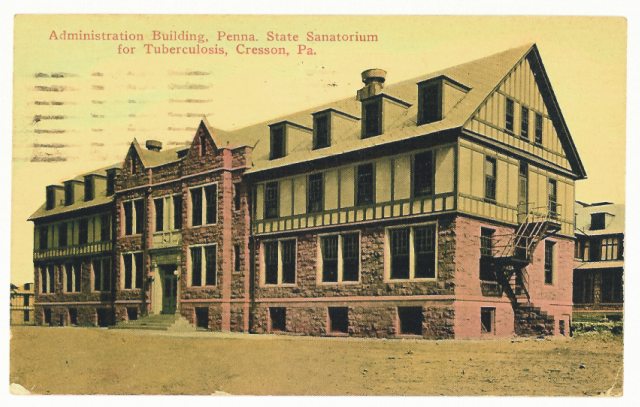 Cresson Sanatorium, called "The San," by those who worked and spent time as patients there, was a sanatorium for tuberculosis patients located in the mountains outside Cresson, PA, in Cambria County, a PA county famous for its association with the 1889 Johnstown Flood.

Cresson Sanatorium was located on lands donated by Andrew Carnegie in 1910. The sanatorium opened in 1913 as a hospital and long-term residential care facility to treat individuals and families who had tuberculosis. Treatment at "The San" could take anywhere from several months to years, and a graveyard at the site preserves those who passed away there. Cresson Sanatorium remained a treatment facility for those with tuberculosis and other health conditions until 1956, when it was incorporated into Lawrence F. Flick State Hospital as a center for patients with mental illnesses. Finally, in 1983, it was converted into a State Correctional Institution at Cresson, which remained open until 2013. Cresson Sanatorium's use as a care center for those with tuberculosis stands as a testament to a particular time in American history when Americans' concerns over the spread of tuberculosis caused the creation of sanatoriums across the country, including White Haven and Mont Alto, PA.

In the novel Out of This Furnace (1940), by author Thomas Bell, Dr. Kralik diagnoses the character Mary Dobrejcak with tuberculosis and prescribes her a stay at Cresson Sanatorium to rest and recover. Mary Dobrejcak, a Slovak immigrant in the novel, experienced the loss of her husband, Mike, in a tragic steel mill accident in Braddock, PA. Succumbing to the hard work of running a boarding house alongside caring for a family and struggling with grief, Mary develops tuberculosis. Dr. Kralik suggests Mary go to Cresson Sanatorium, located in the fresh mountain air of Cresson, PA, to recover from her illness. Mary is able to take three of her four children with her to the sanatorium, where they live together. After an attempt at recovery, Mary Dobrejcak, who lived her life in the steel mill town of Braddock as a hard working immigrant's daughter and steel worker's wife, dies of tuberculosis while staying at "The San." In a moving passage in Out of This Furnace, Mary recalls the dreams she had as a young woman alongside her husband, Mike, and how those dreams were difficult to realize under the harsh life and exploitation as a steel worker family outside Pittsburgh in the early twentieth century.

Today, the land where Cresson Sanatorium once stood is up for sale. Individuals who spent time in treatment as "The San" up until the early 1960s continue to remember their time there and share stories online through memorial websites. "The San" recalls a particular time in American history when those afflicted with tuberculosis left their homes, families, and bustling cities like Braddock, PA, to seek treatment in the mountain air outside Cresson. Some of these individuals, like Mary Dobrejcak, were a part of the Slovak immigrant community in Pennsylvania, who sought a better life and the American dream, but faced the sobering reality of life in the shadow of the steel mill and the industrial city.

Bell, Thomas. Out of This Furnace. Pittsburgh, PA: University of Pittsburgh Press, 1941.

Created by Abigail Koontz (Instructed by John Bloom, Shippensburg University of Pennsylvania) on April 25th 2020, 6:31:23 am.