The Unitarian Universalist Church of Cortland was built in 1837, by Benjamin Davis, a cobblestone mason from Clarendon, New York and Horace Bliss from Truxton, New York. The Church is a large, rectangular, cobblestone building with late Federal/Early Greek revival style design features. It is also one of the earliest Universalist churches in the Southern Tier of New York State. The people of Cortland have used this building to vote, to conduct government meetings, to hold classes for the Normal school, and even to host concerts. During the Mid-nineteenth century the church was quite active in the underground railroad. Here church members fed and clothed runaway slaves that were passing through. The church underwent interior renovations during the 1890’s, which modernized the interior space and added stained-glass window panels and a Morey and Barnes Organ. Due to its wonderful architecture and rich historical past, the building was placed on the State and National Register of Historic Buildings in 1993.

Front view of the Universalist Church of Cortland 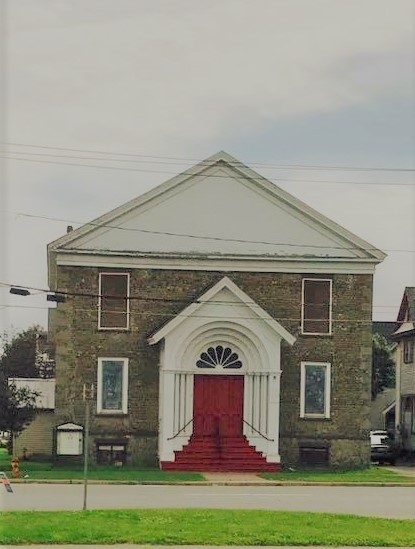 Close up view of Cobblestone exterior and Stained Glass Window 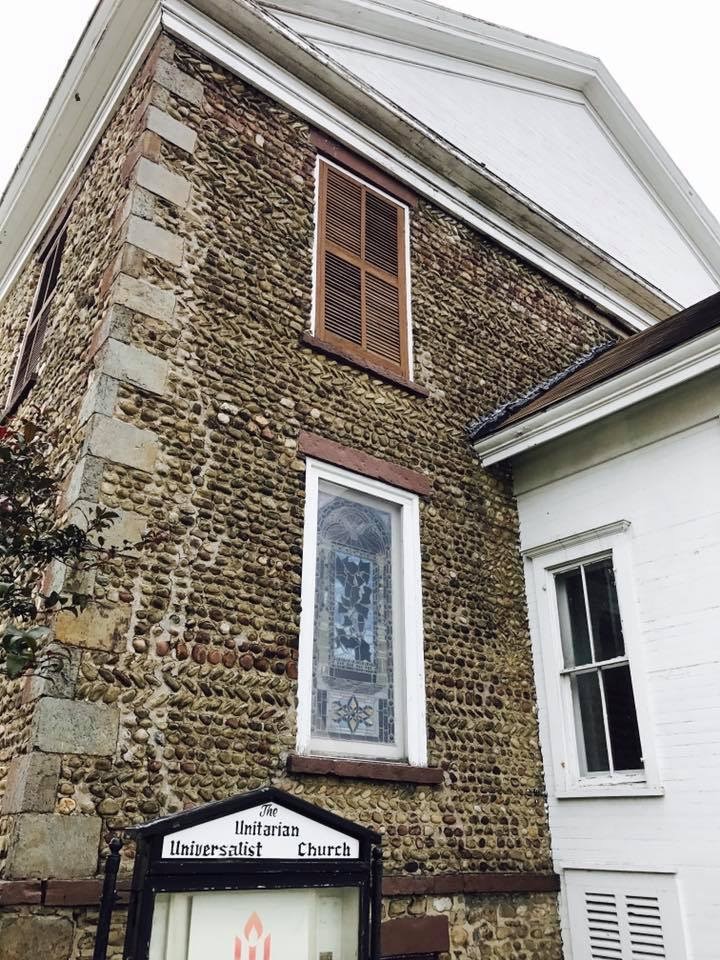 The Universalist Church was built in 1837, by Benjamin Davis, a cobblestone mason from Clarendon, New York and Horace Bliss from Truxton. The church is a two story, 60’ x 44’ rectangular structure, with a two-tiered bell tower attached. The exterior walls are composed of greyish brown cobblestones with limestone mortar, resting on a cobblestone foundation. The Universalist church remains a local landmark in Cortland, for its cobblestone method of construction and as an example of early 19th century religious architecture.

The lot to build the church was offered by Calvin Bishop in 1836, and the labour for the construction of the building was donated by members of the church. Local farmers also helped with the construction of this building by finding, cleaning and arranging cobblestones for the builders. The town of Cortlandville also funded $100 to the construction of the church, in exchange for using the basement of the building for the Town Hall. This building was used for this purpose from 1838-1883, as such, Cortland’s townspeople would have voted for President Abraham Lincoln, within these walls. In the pre-Civil War period, the Universalist Church of Cortland hosted many social reformers and anti-slavery advocates who traveled throughout the lecture circuit. This included: Susan B. Anthony, Clara Barton, Henry Ward Beecher, Ralph Waldo Emerson, William Lloyd Garrison, Thomas Starr King, Lucretia Mott, Theodore Parker, Wendell Phillips, and Harriet Beecher Stowe. The church was also active during the underground railroad. At this location, church members would house, clothe, and feed run-away slaves.

The Church underwent significant interior changes in the 1890’s. The building was refurbished by architect H.W Beardsley, who’s goal was to incorporate the trends of the late nineteenth century Victorian age and express the wealth brought on by the industrial revolution. The additions included a theatre styled, Akron seating plan, large decorative timber beams, Canadian Ash ceiling panel and 10 stained-glass panels. The stained-glass panels were created by the Utica Stained class company. In 1895, a large arch was cut in the east wall of the church to accommodate a Morey and Barnes organ. This historic organ is well maintained and is nationally recognized by the American Organ Historical Society, for its superb sound and nearly original condition. The organ managed to survive some serious threats from a storm that tore the roof off of the organ shed in, 1998. renovations were conducted that year to fix the damages caused by the storm.