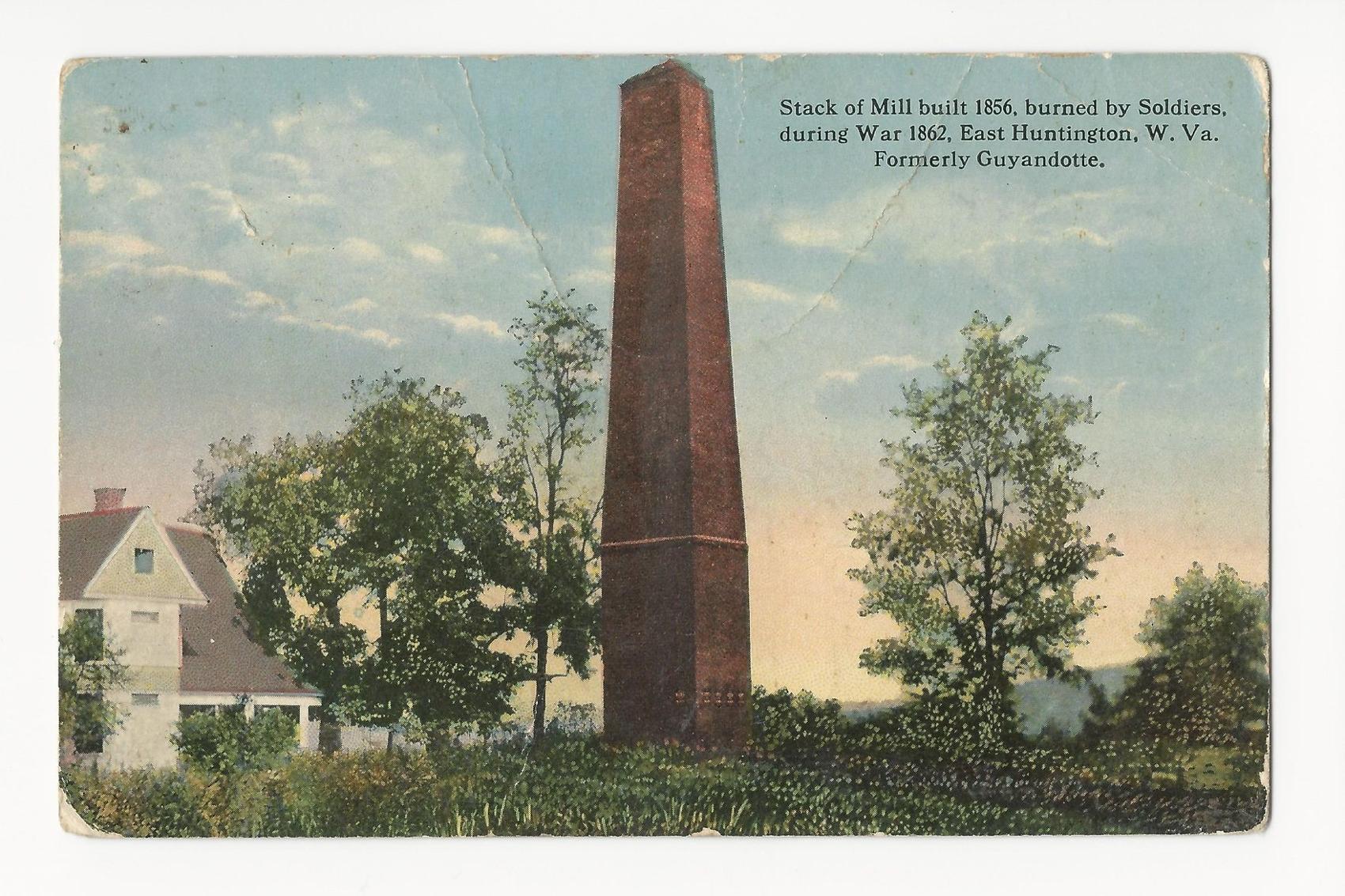 Photograph of the Buffington Mill smokestack before it was torn down 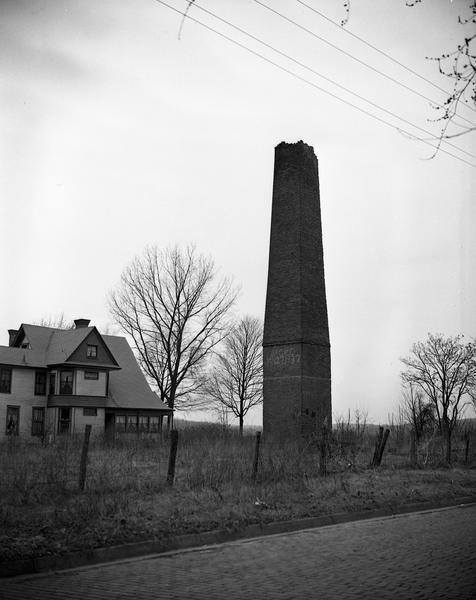 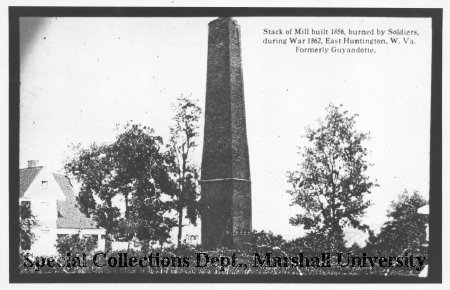 Copy of the original plan of Guyandotte from 1809 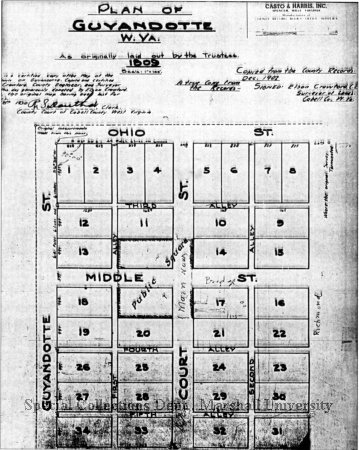 Historical marker for the Raid on Guyandotte 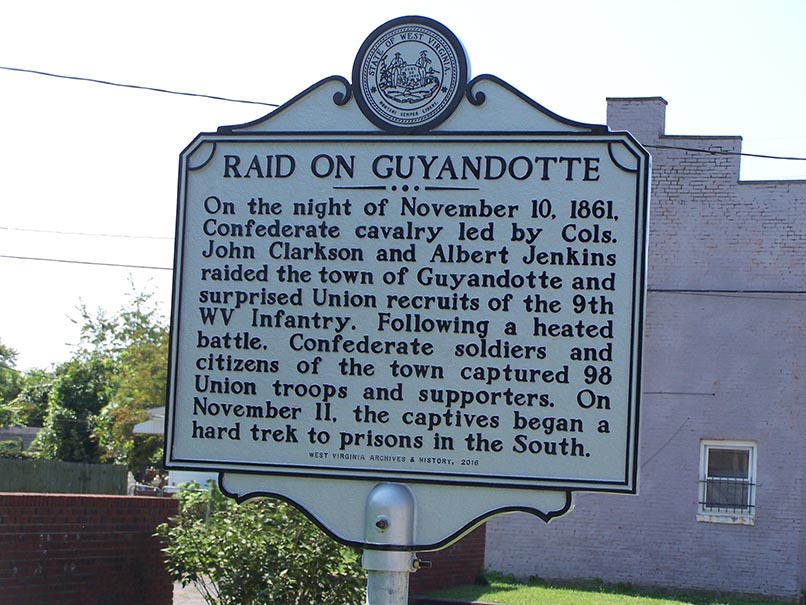 Historical marker for the Burning of Guyandotte 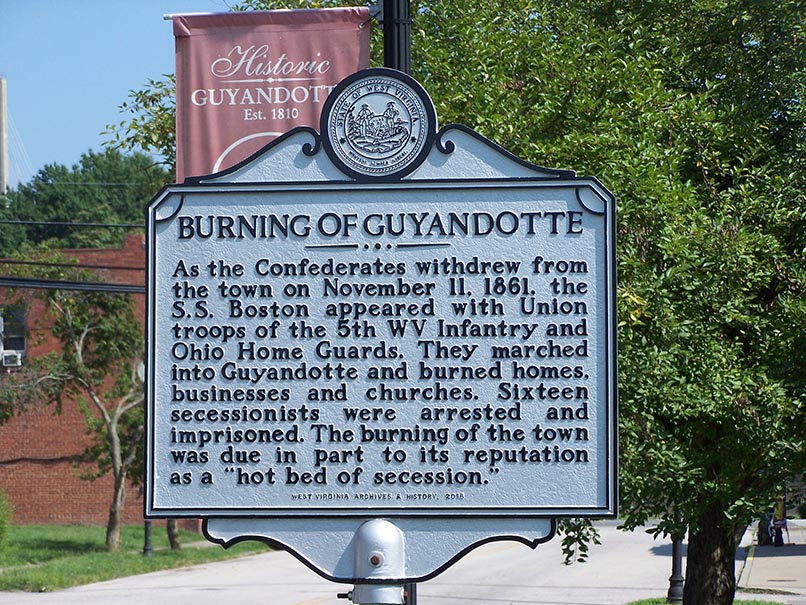 Located at the confluence of the Ohio and Guyandotte Rivers in Cabell County, Guyandotte was a small but bustling port community long before neighboring Huntington was established. In 1772, much of the land that now comprises Cabell County was granted to John Savage and sixty others for their service during the French and Indian Wars. William Buffington purchased a portion of the Savage Grant and willed it to his two sons, who arrived in Cabell County in 1796. Over the following years, settlement of the area progressed rapidly. The Virginia General Assembly created Cabell County on January 2, 1809, and chartered Guyandotte the following year from twenty acres of land owned by Thomas Buffington. A port of call for steamboats and a stagecoach stop on the James River and Kanawha Turnpike, the village quickly grew into a trading post and shipping center for items like salt, timber, molasses, furs, and tobacco.

By the middle of the nineteenth century, Guyandotte had grown into a bustling town with a steam grist mill, a flour mill, several churches, five stores, and about forty homes.

Built in 1856 on what is now Buffington Street, the Buffington Mill was one of Guyandotte's biggest businesses. According to State Archivist Joe Geiger Jr., the mill was the largest on the Ohio River between Pittsburgh, Pennsylvania and Cincinnati, Ohio. It was a three-story structure with an overhead runway running over Front Street, which is now called Buffington Street, and down to the Ohio River. At the mill, wheat was unloaded from steamboats and processed into flour, which was loaded into barrels and shipped south. The mill was co-owned by Thomas Jefferson Jenkins of Greenbottom, who was a brother of Congressman and Confederate General Albert Gallatin Jenkins.

At the outbreak of the Civil War, Guyandotte and its vicinity showed strong support for the Confederacy. Many citizens left the town to fight for the South, and residents erected a flagpole on the banks of the Ohio River that flew the Confederate flag. By the fall of 1861, Union forces had gained tenuous control over most of the region, and a Union recruiting camp had been established in Guyandotte, although Confederate cavalry raids remained frequent. Guyandotte’s Union recruiting post was the site of one of these raids on November 10, 1861. The Confederates easily overpowered the Union forces, and ninety-eight Union troops and sympathizers were taken prisoner. The following day, the Confederates were withdrawing from Guyandotte when fresh Union troops arrived and set fire to the village in response to rumors that the townspeople had aided the Confederates. Along with most of Guyandotte’s business district, the Buffington Mill was burned to the ground, leaving only its tall brick smokestack behind.

Following the Battle of Guyandotte, the community was rebuilt, and more than fifty businesses were in operation there by the 1870s. However, the town entered an economic decline when Huntington was established just downstream in 1871. According to local legend, Collis P. Huntington decided not to locate his C&O rail terminal in Guyandotte because he had been fined for letting his horse block a sidewalk. Whatever the true reason, Huntington quickly outgrew Guyandotte as businesses and people were drawn to the new town. Eventually, the citizens of Guyandotte decided to become part of Huntington by a vote of 260 to 70 in 1911. Over the years, as the village of Guyandotte evolved and was finally incorporated into Huntington, the smokestack of the old Buffington Mill remained standing. It was finally demolished during the 1960s or 1970s in order to make way for the construction of a new apartment complex on Buffington Street.