Now a federal office complex, the building at First and Madison Streets once housed a woodworking shop in its basement. On the afternoon of June 6, 1889, the shop became the epicenter of Seattle's Great Fire when a glue pot boiled over on the stove. By the end of the day, the fire had consumed 64 acres of the city, completely destroying the business district. Today's Pioneer Square was rebuilt from the ashes.

Looking south on First Avenue from Madison in today's Seattle; the former site of Clairmont's shop can be seen on the left. 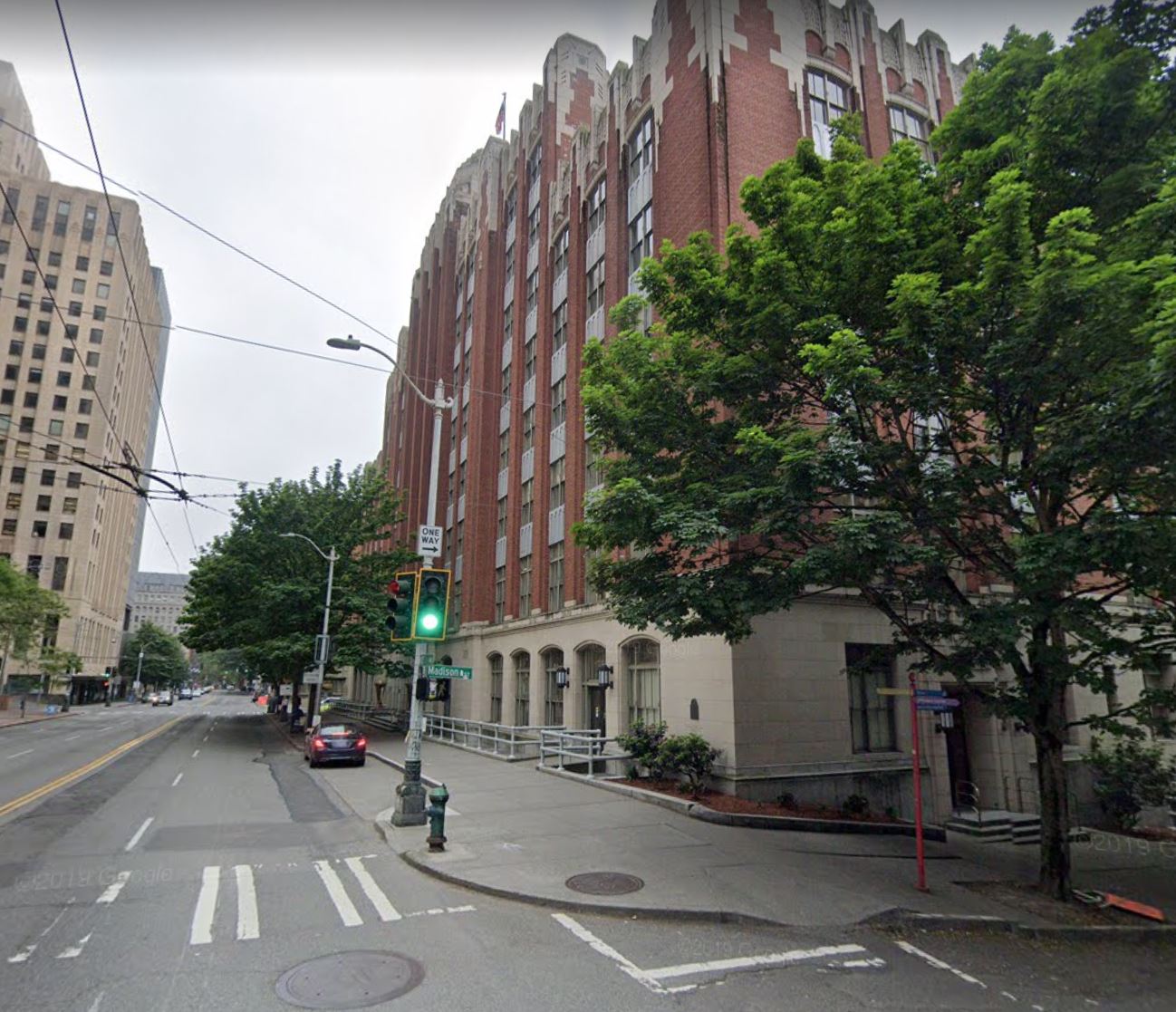 Clairmont's shop engulfed in flames, with the volunteer fire department in action. 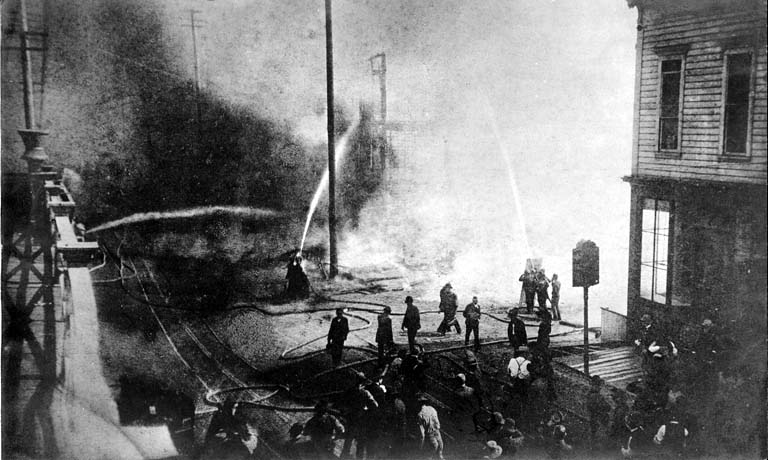 John Back, an assistant to Clairmont, poured water on a pot of spilled glue, touching off what would eventually become the Great Seattle Fire. Photo ca. 1885. 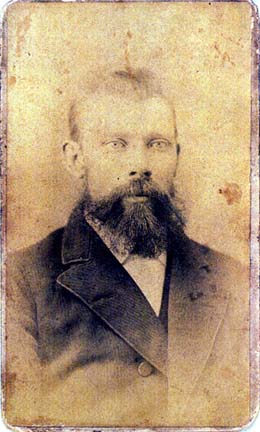 Downtown Seattle, gutted by the fire, including the ruins of Frye's Opera House, one of the first buildings to catch fire. 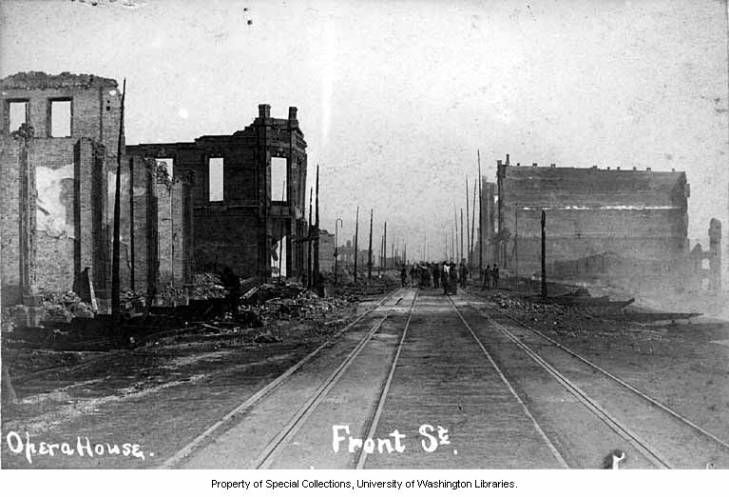 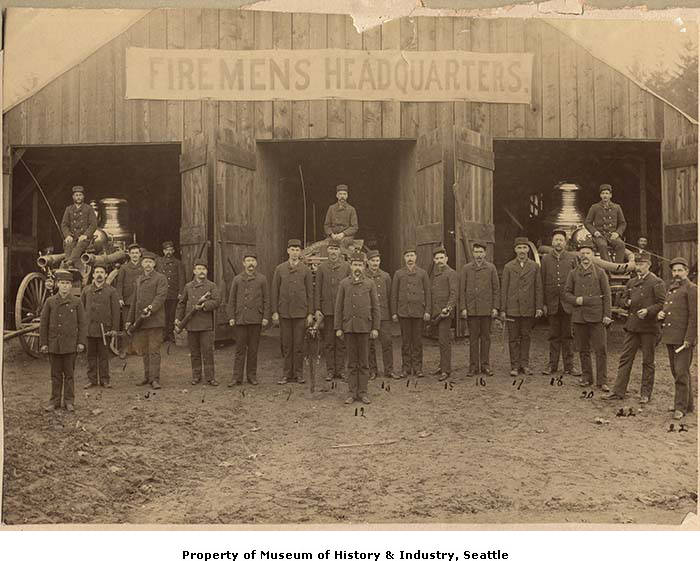 The year of 1889 had seen an unusually clear, dry spring, and June 6 looked to be another beautiful day. It was a typical workday for John Back, an assistant to Victor Clairmont, who ran the cabinetry shop in the basement at First (then Front Street) and Madison. Back was heating a pot of glue over the stove, and sometime around 2:30 pm, it boiled over or spilled, catching fire in the gasoline flame.

Clairmont's store was one of the worst places in the city for a fire to start. The turpentine and wood shrapnel on the floors fed the flame, and to make matters worse, Black tried to fight it with a bucket of cold water, which only spread it out. Though everyone inside the building escaped safely, it was surrounded by alcohol-storing saloons and streets paved with wooden planks. The row of buildings stood above the ground on pilings, and the space beneath served as a conduit for the fire.

By 2:45 pm, Seattle's overgrown and ineffective volunteer fire department was on the scene with the city's first steam-powered fire engine at their disposal, but the water mains, privately owned and served by the Spring Hill Water company, proved severely inadequate - eventually, pressure in the small hollow-log pipes failed entirely. By then the fire had chewed its way through the lower levels of the block from Madison to Marion and caught the east side of First Avenue, where smoke was beginning to pour out of the opera house.

The firemen fell back amidst jeering from the onlookers, and the acting Fire Chief, James Murphy, passed his command to Mayor Robert Moran. (The Fire Chief himself was away at a firefighting convention.) Moran directed the use of explosives to create a fire break, but the fire leapt over it in the day's strong wind, into the wharves and the lumber mill.

Firefighters from Tacoma, who could see the column of smoke from their own city, arrived to help, but by nightfall, Seattle's commercial center was doomed, and the fire had crossed Yesler to tear through the shacks of Skid Row. It burned until 3:00 am., destroying 120 acres in all. In the end, though the human death toll was reportedly low, the damages have been estimated as high as $20,000,000. 5,000 workers lost their jobs, and countless residents found themselves displaced.

But the next day, the city sprang into action, placing the town under temporary martial law, forming a relief committee, and converting the armory into a dining hall for the displaced. Businesses rebuilt promptly, using brick and stone, since wood-frame structures were now banned, and the city took the chance to raise street level and smooth the troublesome hills, creating what is now the Seattle Underground. They also founded a professional fire department. The calamity that started here in Clairmont's cabinet shop eventually came to be known as "the first step in the evolution of a new and mightier city."2