This is a contributing entry for Chadds Ford Historical Society and only appears as part of that tour.Learn More. 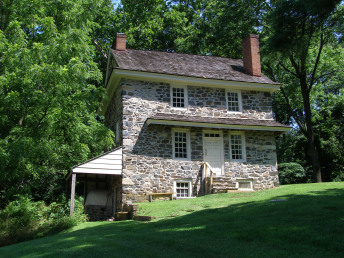 The Chads House before the restoration, taken at one of the very first Chadds Ford Days 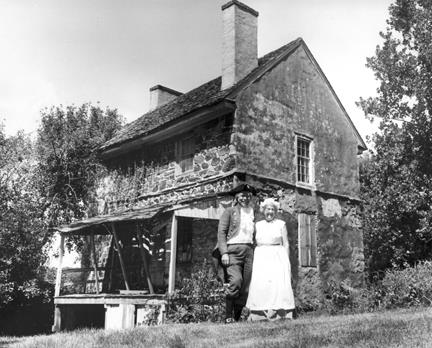 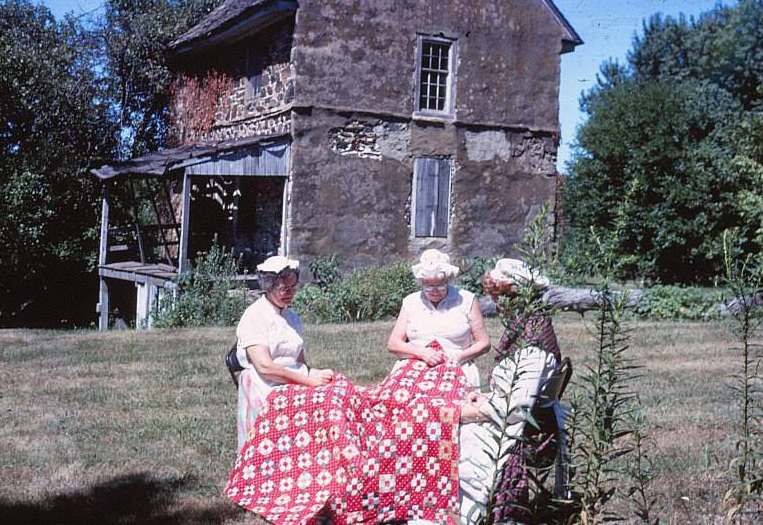 The Master Bedroom during Candlelight Christmas 2018 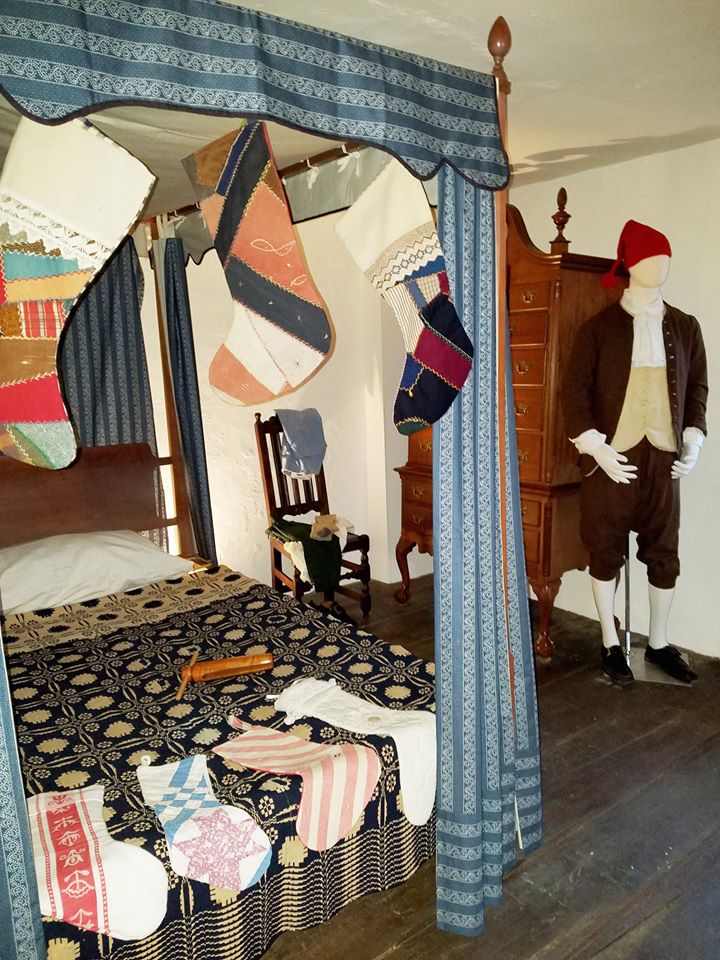 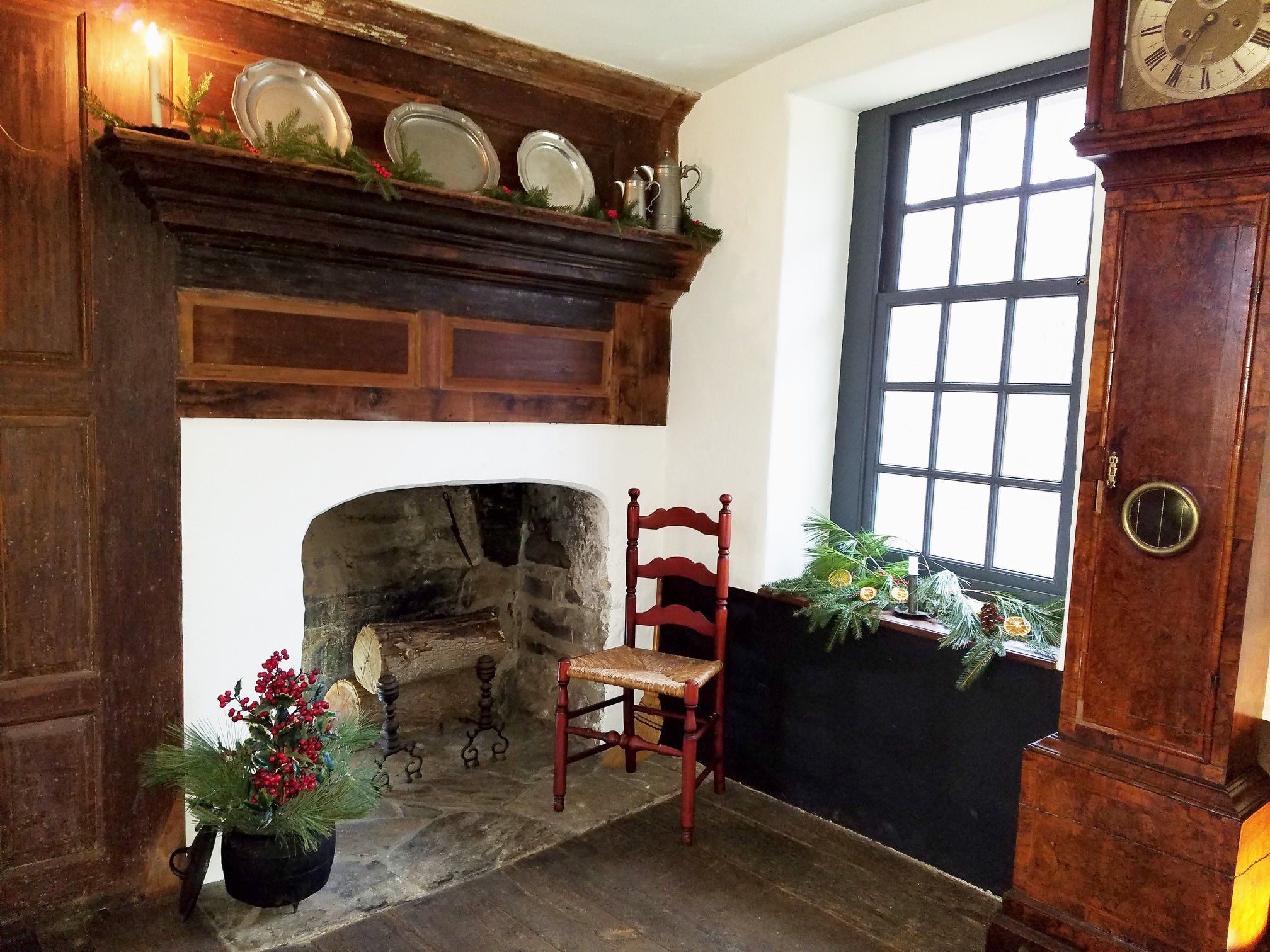 Baking in the kitchen of the Chads House 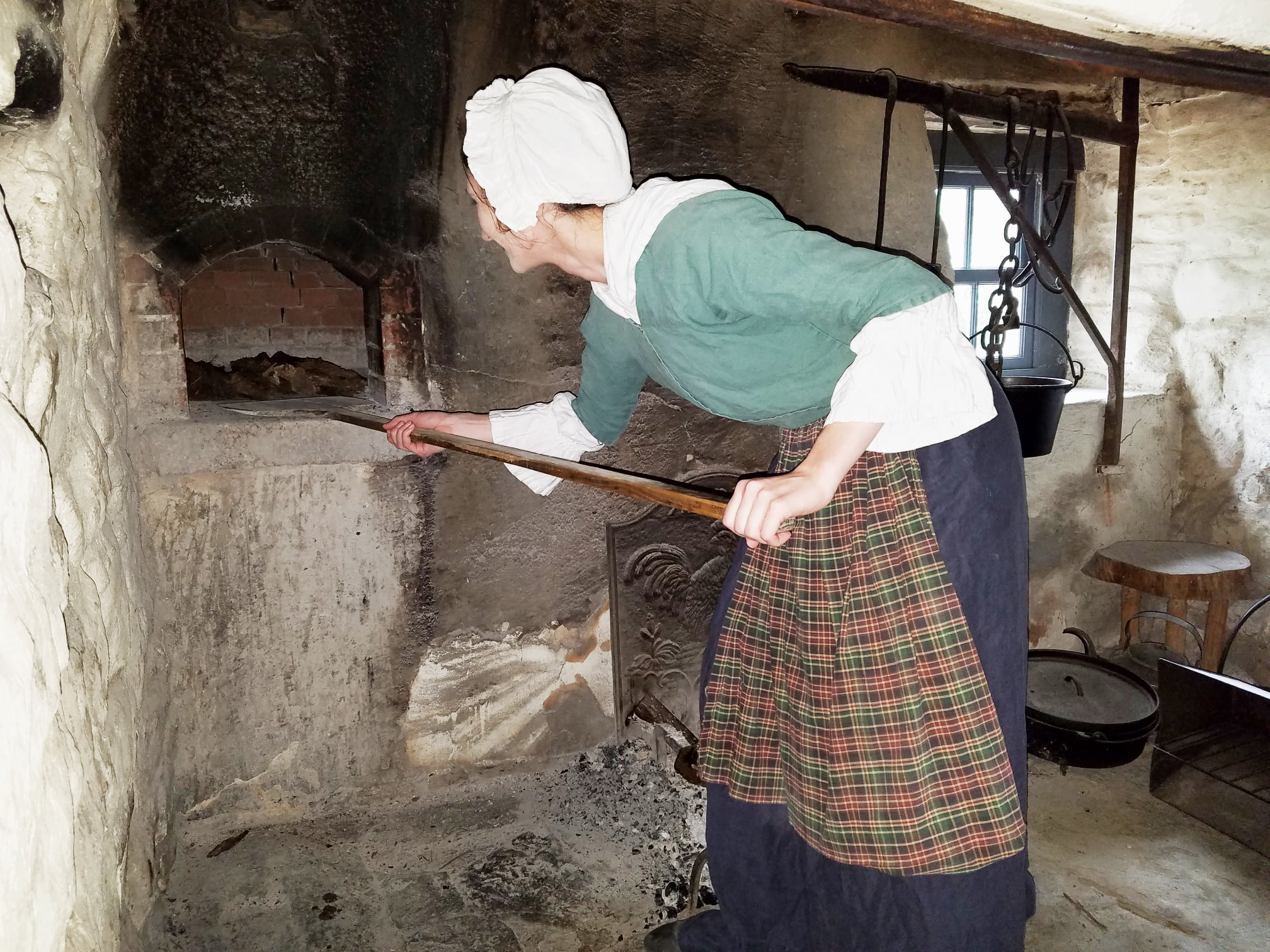 This was a home. Although Elizabeth and John Chads had no children of their own they must have been friends with many who would have come to their home often (look up the long list of children to whom she left money, furniture, etc., in her will.) This tour highlights architectural information more likely to interest adults than youth groups. For information about the human element in this house, see the youth tours for this home. With both types of information you can tailor your summer or adult tour to the audience by focusing on architecture, domestic life, cooking and baking or the Revolutionary War, just to name a few.

It was a big working farm – 500 acres originally. (Note the number of animals in John Chads’ inventory after his death.)

It was a business operation: the corn mill, the tavern, and ferry at the ford. As a fording place it was an important link to metropolitan areas for visiting and for marketing produce, animals, etc. John Chads was innovator and proprietor of this only documented ferry across the Brandywine in Pennsylvania. It was only natural then that such an entrepreneur’s name be chosen to name the village – Chadds Ford.

This room is perhaps most important as the space where John Chads conducted his many businesses. In 1736, John Chads built a ferry across the Brandywine River and petitioned the local courts to allow him to set standard rates for his service. That same year, John also received a license to run a tavern, which is believed to have been in the former dwelling of Francis Chadsey. Chads' tavern was very popular with both travelers and members of the community. When the local court was unwilling to renew his tavern license in 1742, 77 of his neighbors signed a petition stating that Chads ran a very orderly and hospitable tavern. The court eventually renewed his license when Chads threatened to absolve his ferry business. John continued to run both the ferry and tavern until 1746, when he relinquished both businesses to his cousin-in-law James House.

The parlor was the nicest room on the first floor and served as a private living room. One of the main functions of the parlor was taking tea, a sign of civility in Colonial America. It could have also been used for entertaining friends and family, as well as recreational activities such as reading and playing cards. It is important to note the fireplace as evidence that this room is a nicer room than the Great Hall. Instead of a mantle, this fireplace has recessed cupboards, which were common in wealthy Quaker homes. The sides of the fireplace are also concaved to help heat escape into the room and add a more aesthetic appeal.

This room would have reflected the Chads’ high status in the community. They were among the wealthiest families in the area in the 1730s and 40s, and at one point were the highest taxpayers in Birmingham Township. Although neither one attended college, they were both considered well educated at the time and possessed several books in their inventories. Because of the respect he held in the Goshen Meeting, John Chads was given important tasks such as executing wills, reviewing marriage certificates, and holding Orphan’s Court in this very house. Orphan’s Court handled the estates of those who died without a will and was meant to protect a child from a greedy widow or step-father. Among the many people whose estates he settled was William Barns, the original owner of the Barns-Brinton House.

The spiral staircase has been restored since the Historical Society took over the house, but it replicates what would have been there when the house was built.

This room would likely have been used as a children’s bedroom if the Chads had any children, which they did not. Instead, it was likely used as a guest bedroom. Unlike the other rooms in the house, this one never seemed to have a fireplace.

When John Chads died in 1760, Elizabeth continued to live in this house for another thirty years. For at least some of that time, her cousin Amos House appears to have resided with her in this house. While the Battle of Brandywine was erupting around them in September of 1777, Amos House went outside to inspect the fighting. As he watched Continental and British artillery fire at each other across the river, a cannonball landed close to him and knocked him on the ground. General Washington, who was riding close by, apparently noticed this and admonished Amos for leaving the safety of his house. Amos and his wife Martha would go on to have at least one child, who made the original sampler on the mantle of the fireplace.

This is the room where John and Elizabeth would have slept. The fact that it was located directly above the parlor, the finest room on the first floor, indicates a sort of linear hierarchy of the rooms. According to Elizabeth’s will, the bed was the most expensive item in her inventory, likely because of the curtains and canopy which would have been hand-sewn by a talented upholsterer.1

Despite having no children, John and Elizabeth seemed to have enjoyed a happy marriage. When John died, he left the house to his “dear and well-beloved wife” and saw to it that she was cared for physically and financially. An interesting clause in his will stated that he promised to give the house to his cousin Joseph Davis when Elizabeth died under the condition that he provide her with firewood throughout the rest of her life. Unfortunately for Davis, Elizabeth outlived him, and house eventually went to his son Benjamin.

Since Quakers believed in universal equality, Elizabeth enjoyed more freedom than most women in colonial America. Many wills from the Goshen Meeting have her name alongside her husband’s as a witness. She also was listed as an “overseer” of the Birmingham Preemptive Meeting in 1780. She was also living in the house during the Battle of Brandywine and allegedly hid her silver spoons in her petticoats in the event of plunder.

The basement would have been used for a variety of domestic work, including cooking, ironing, and washing clothes. Most of these chores would

have been done by the women of the household. Elizabeth Chads was able to employ servants to help her with domestic work as she had the money but no children to help her. We know that John and Elizabeth had at least one indentured servant who apparently ran away from his next employer. We also know that John’s father owned three enslaved servants, though we don’t know what happened to them after he died. While the family would have enjoyed the nice rooms we saw upstairs, servants would have had to sleep in the basement, attic, or out buildings.

The large walk-in kitchen fireplace is a common - indeed necessary - feature in an 18th century home. The crane hovering over the fire would allow the cook to control the temperature and hang pots and pans without getting too close to the fire. The beehive oven, a reconstruction, would have been used to bake bread or pies. We also have on display various cooking items, such as a reflector oven and toaster, all of which were mainstays in a colonial kitchen.

The basement is the only floor of the house with an interior stone wall partition. This served to keep temperatures relatively constant in each room trap the heat from rising above the kitchen.

The room adjacent to the kitchen was used as a cooling or keeping room - also known as a root cellar or vegetable bin. This room was used to store vegetables (carrots, turnips, parsnips, potatoes, squash, etc.) and other produce that would require a cool dry place as opposed to the damp storing area in the springhouse.